Killing Eve S3/E5 Review: ‘Are You From Pinner?’ 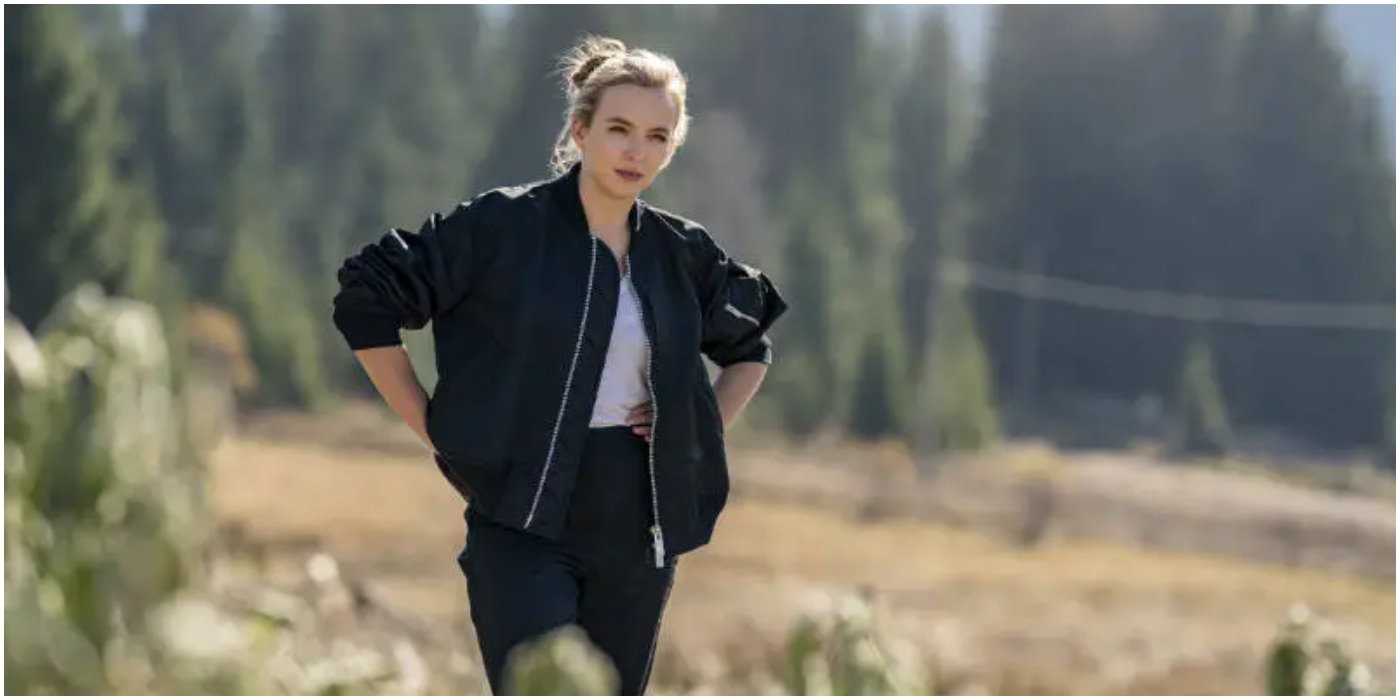 “Oxana is not a killer.” This statement, made in the course of a friendly card game, is in many ways the central question of Killing Eve. Who is Villanelle? Is she the glamourous sociopathic assassin? Or is she Oxana, the abandoned Russian orphan?

“Are You From Pinner?” seeks to answer the question once and for all. Villanelle returns home to meet her birth family in Russia and the series continues to break format by focusing on her exclusively for the entire episode. Eve, Carolyn, and the hazy mystery of the season – who killed Kenny – all sit out to allow the shows’ most popular and yet challenging character shine.

Jodie Comer has enough hardware at this point to prove she’s one of the best actresses working in television, but her Emmy reel gets several strong additions in this episode. Villanelle is her usual glib, silly self until she spends more time with her family and the layers peel back. She generally acts like a child, selfish, petulant, and careless, and as the revelations unfold, our instinct is that she remains emotionally the girl her mother consigned to an orphanage because she couldn’t feed her.

At least that’s the story. An air of suspicion hangs over everything said in the episode. The question of what happened to Villanelle’s father is never answered definitively. Did he leave? Why? Did he die? Villanelle set a fire at the orphanage, burning it down, and her family believes she died in the flames. She was told her family died in a car accident. Either way, Oxana was on her own and wandered down the dark path that led her to become a killer for hire. 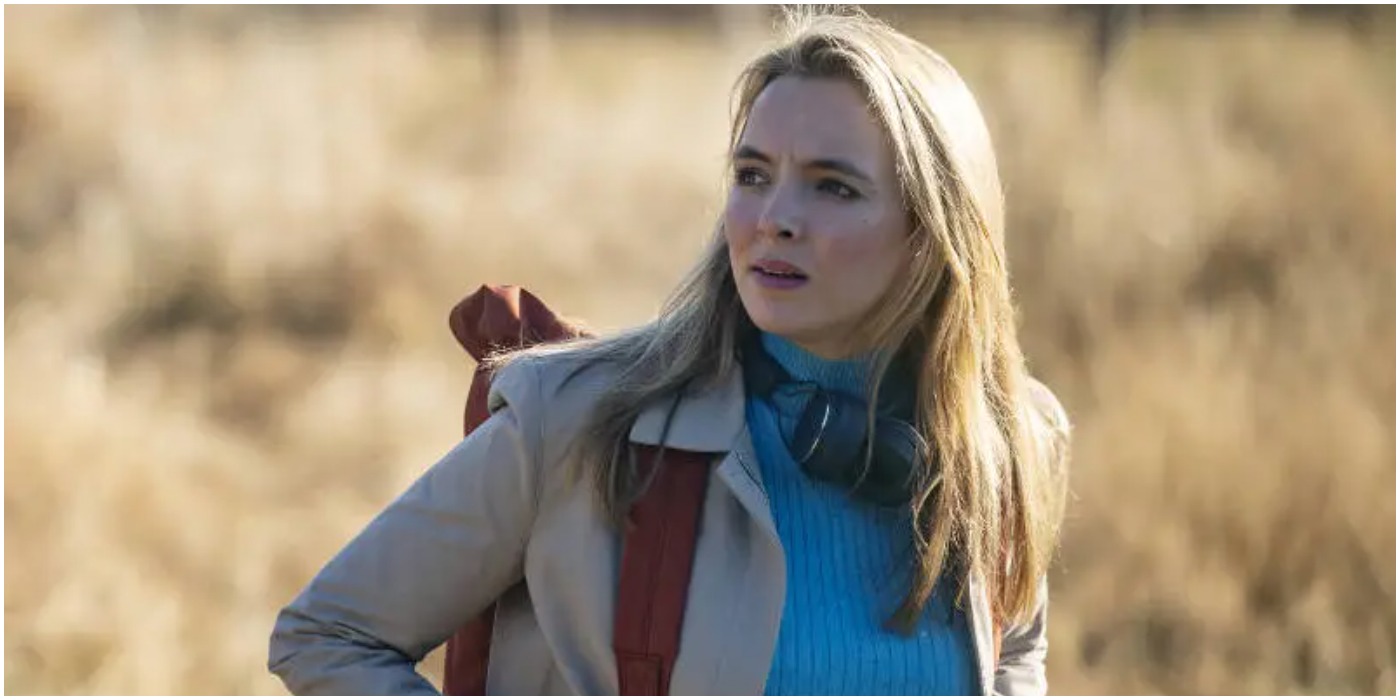 Was her fate inevitable? Is she a bad person, or a person bad things happened to? The episode doesn’t provide a concrete answer, but Comer’s nuanced performance suggests something the uncertain words the characters speak don’t. At first reticent – though she walks right into her family’s house and goes through their fridge, the dichotomy of Villanelle laid bare – the sheik and positively continental Villanelle eventually warms to the rustic, pastoral charms of her family.

She especially warms to her half-brother, Bor’ka (an excellent Temirlan Blaev), perhaps the biggest Elton John fan in Russia. Posters and news clippings of the singer cover his bedroom walls and his dream is to go to London to see Elton during his farewell tour. Villanelle takes a liking to him, and in keeping with at least one tradition of the series, she dresses up in a wig and big-heart sunglasses. Villanelle always hides in someone else, but for the first time, she can’t escape who she is. 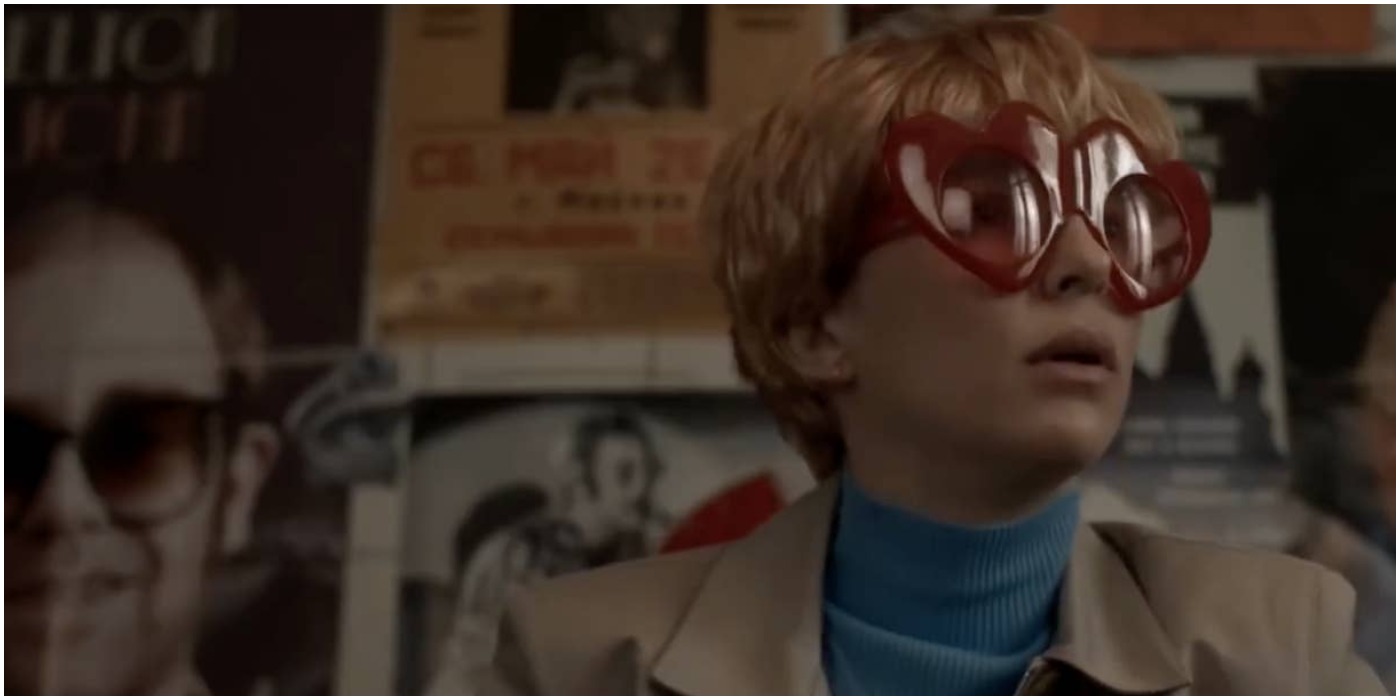 The dissonance of the music in the episode makes this plain. The general elements of the soundtrack remain in the off-kilter songs, but now they speak plain the episode’s subtext – “It didn’t happen if you bury it deep” – and yield eventually to the diegetic music of the Russian village, particularly when the girlfriend of her step-brother is one her stage with her – band? – and the music becomes confused.

At the start of the episode, as Villanelle enters the village, she wears headphones and doesn’t hear a giant truck bearing down on her. But then it seems she does, and what Villanelle can and can’t block out becomes the crux of an episode in which the sound she hears in her head is clearly not the one most people hear. The voices, perhaps, are not the voices that others hear.

Even that may be too simplistic. It’s said psychopaths are born and sociopaths are made. Was Villanelle ‘made’? As we get to know more about her past and her family, we’re not sure. Villanelle has romanticized the hazy memory of her father and regards her mother with a great deal of suspicion. Why did she send Oxana to the orphanage? Why did she keep her brother, and treat this family so well? Has her mother even changed? Her treatment of Bor’ka, cutting him down for failing a contest in the village festival – though off-screen – suggests that nothing has really changed. 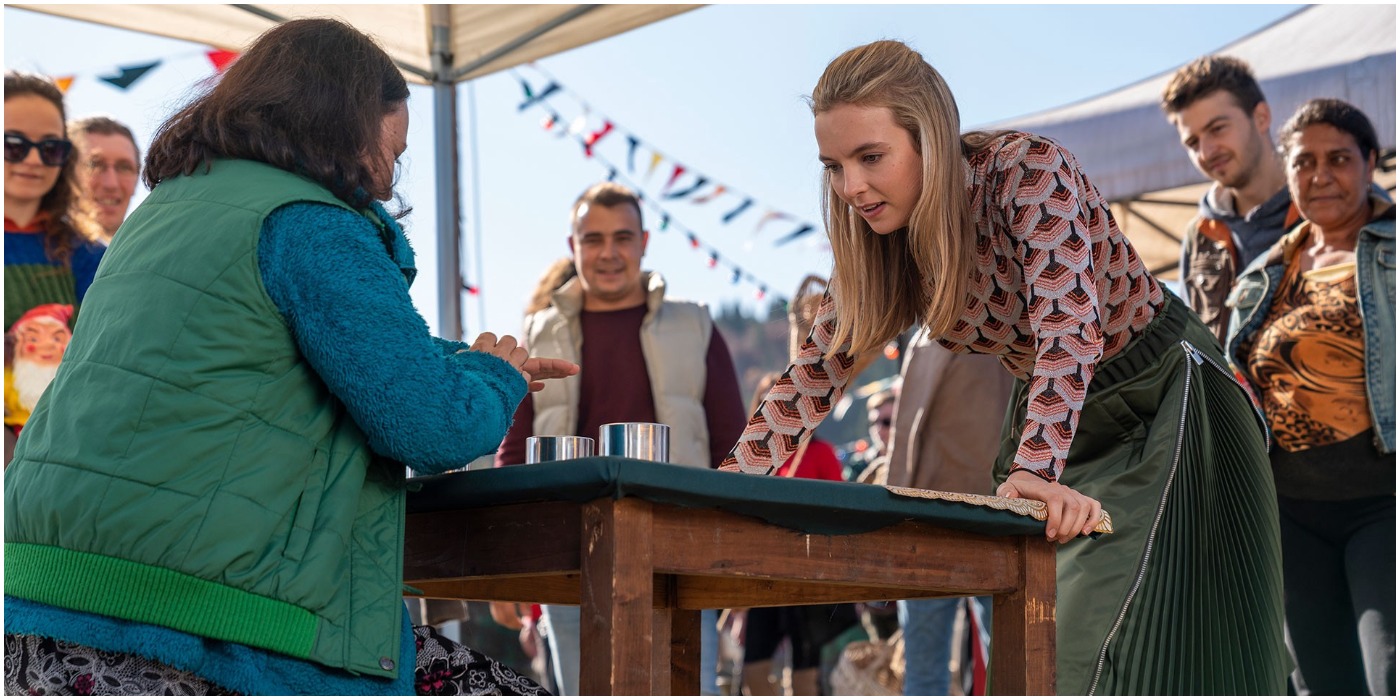 Villanelle wants to change. That becomes clear as her shields go down and she indulges in the simple, happy fun of the festival. She dominates every game she participates in, including a dung throwing contest where she wins a rotating fan and the adoration of her family. The sense that Villanelle needs to confront who she is was planted in the third episode, but here we see how desperate it is. Villanelle’s boredom and disconnection from life stem in some measure from the disconnect with her past. That she wants to repair it speaks to the truth that her humanity still exists.

That becomes stark in a moving and disturbing scene at home after the festival. Villanelle tries to get a rise out of her mother by drawing tomato paste on her face to make it look like blood is coming out of her eyes. This idea she’s a demon, or possessed, twists the knife in what was to that point a new chapter in her life. Villanelle asks her mother to wipe the paste off.

“You are not a child,” her mother says. Villanelle’s reply says it all: “I want to feel like one.” 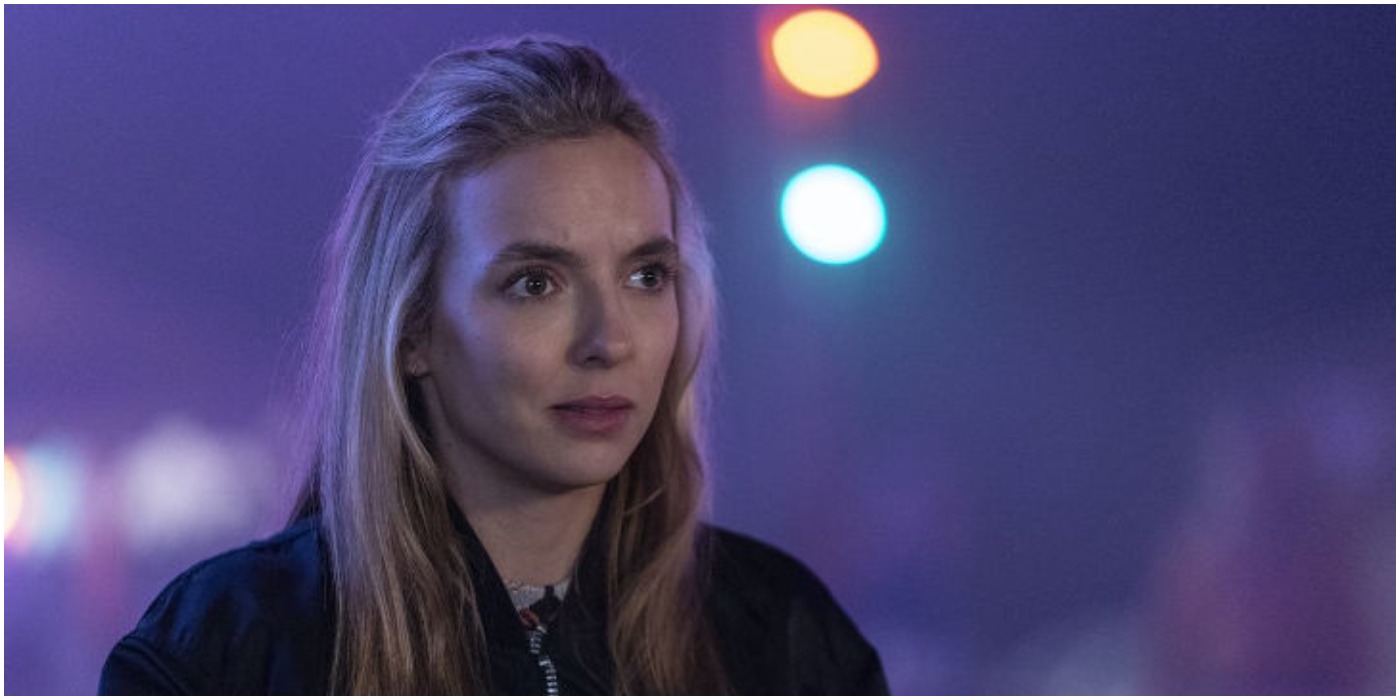 Villanelle is not a child. She acts the way she does to be the child she never was. Whether her murderous behavior is a result of this, or it’s just the darkness her mother says was always in her from the start, we don’t know. All we know is the episode ends where most probably thought it would.

“I think I have to kill you now,” Villanelle says to her mother, in the show’s most chilling moment yet. Villanelle burns down the house with her family in it – save for Bor’ka, whom she leaves money for Elton John – and walks away from her past. As she does, she lets out a frustrated scream of rage.

On the train ride back, wearing an 80s denim jumpsuit her mother gave her, Villanelle listens to music we can’t hear. The tonal dissonance of the episode amplifies as her emotional grip crumbles. The person we thought Villanelle was disappears, replaced by someone we’re only getting to know. 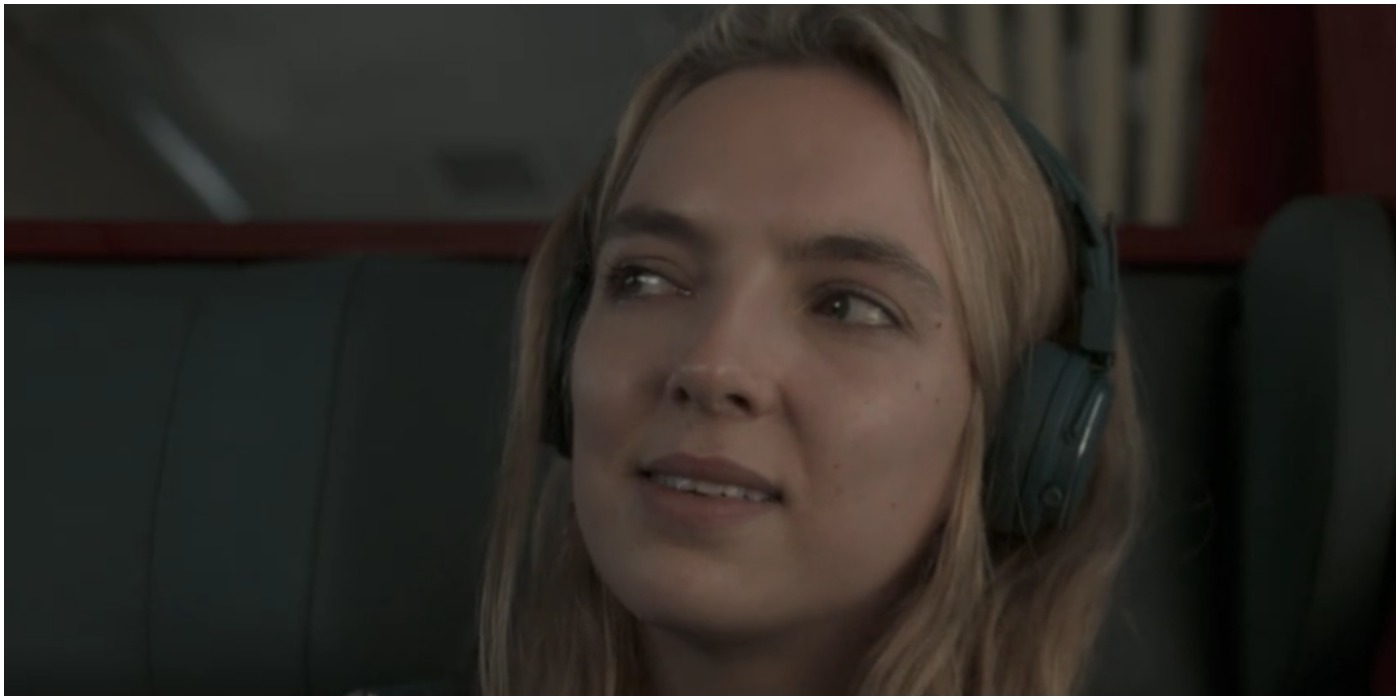