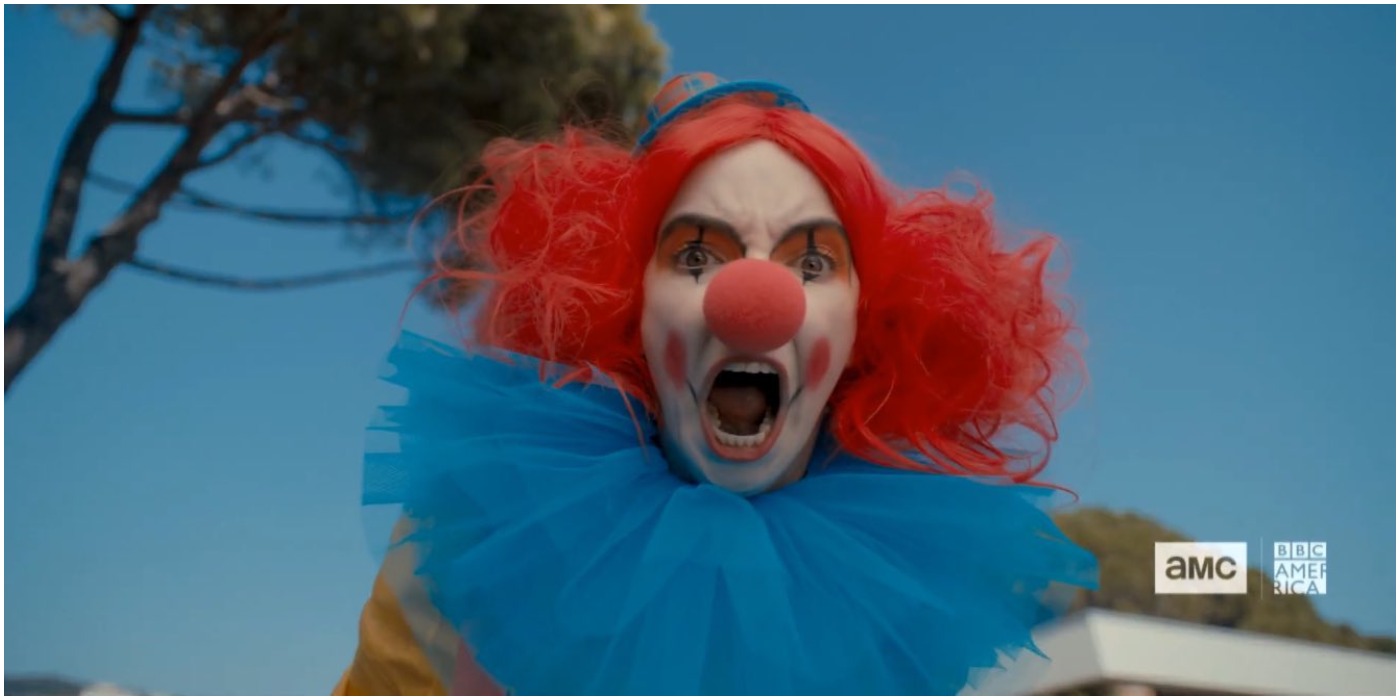 In the second episode of the third season, the story tailspins into bleary eyed grief. Everything is turned upside down. And Jodie Comer submits her audition reel for the next version of the Joker. Seriously. Jodie Comer should play the next Joker. Look no further.

Killing Eve finds itself in a strange place. This is a show about death, but it’s never really considered it. With the untimely and mysterious passing of Kenny, the show wisely slows down to consider the impact in a way it certainly didn’t when Eve’s partner and friend Bill danced his last dance in season one. With Dutch angles and the edges of frames blurred out, the show takes on a confused and off balance feel that’s appropriate and disorienting. What has happened? What will happen?

That confusion is exacerbated by the fact that Villanelle is more disconnected from the story than ever before. She sets up shop in Barcelona, indulging her very expensive tastes in clothes, apartments and women. This is what she wants, and her vainglorious narcissism runs the risk finally of being alienating. With Kenny dead and our heroes tailspinning, we want something from Villanelle that provides some comfort or absolution, let’s say, in cheering on her amoral behavior.

The solution to that this episode is to give her an assignment where she literally clowns around. As part of her training to become a Keeper, a nebulous sort of captain in the ranks of the even more mysterious Twelve (who certainly had something to do with Kenny’s death), Villanelle must take on an apprentice. Darth Sidious she is not, nor patient nor understanding, which she acknowledges. This throwaway line is what we needed to hear: Villanelle is self-aware. She is conscious of her limitations. She can grow. 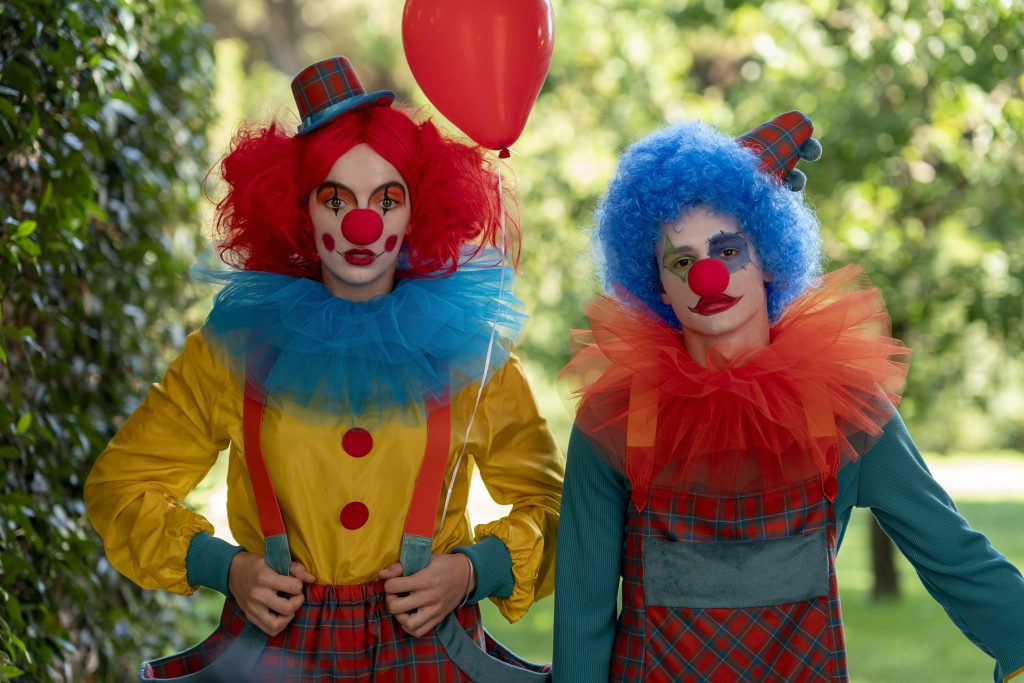 Jodie Comer continues to provide a kinetic, incandescent performance as Villanelle, a sociopathic assassin for hire so bored with her life that she finds satisfaction only in peeling back its edges. Her too brief turn as a manic clown brings exactly the fun you hope it does. She frightens the kids, she cleans up after her new trainee’s mess and she kills him. What seemed like a promising storyline goes absolutely nowhere, but perhaps that’s because Villanelle will quickly re-enter Eve orbit.

Villanelle learns Eve is still alive at the end of the episode, another disorienting scene well staged by director Terry McDonough and acted but no shock whatsoever. Of course it’s not to the audience, but honestly it shouldn’t be to Villanelle either. Her confidence in her aim can’t be that great, as Konstantin tries to remind her, though his words fade out in one of the episode’s brilliant moments of entropy. She tried to kill him once and failed. She doesn’t kill the people she loves. She doesn’t miss; ask the new kid.

Eve meanwhile isn’t sure of her direction, either. She’s drinking, smoking and tailspinning at Kenny’s wake. Her anger at Carolyn is understandable and so is Eve’s trying to hold on to some part of Kenny (and Eve’s former life as an MI6 agent) by taking his phone. She can’t unlock it, though, and enters a sure to be Faustian bargain with the crew of Kenny’s employer, Bitter Pill. They want to know what Kenny had on his phone. She wants to know what he was working. Neither party seems to have anything, and Eve goes to Carolyn with the phone and a commitment to find the killer. 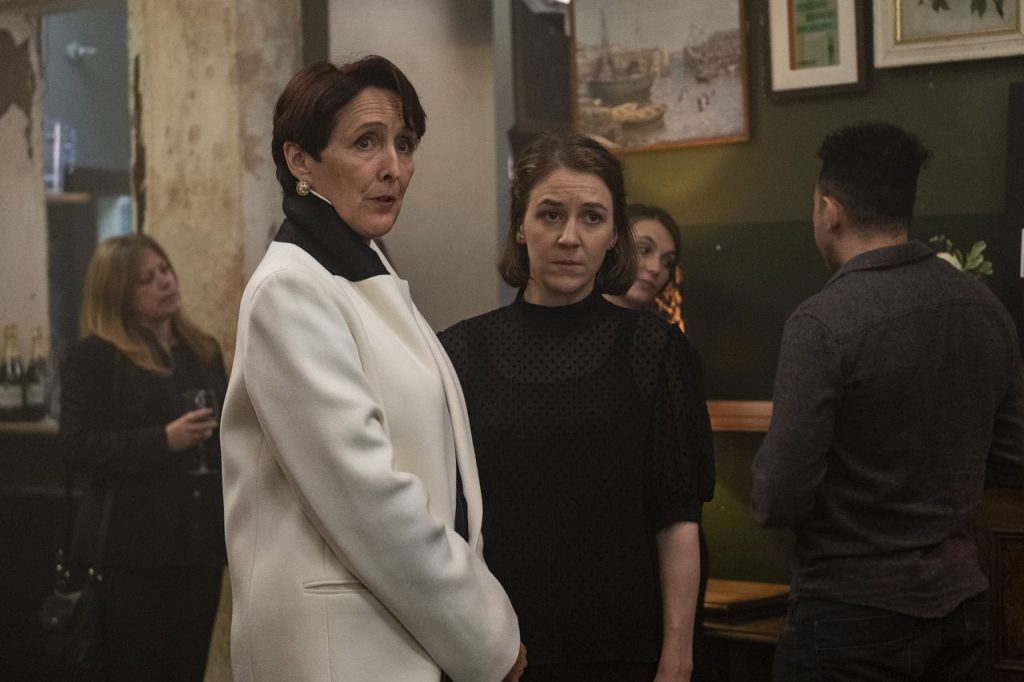 Fiona Shaw excels in this episode, holding such a stranglehold on her grief that she continues mashing the same bite of sandwich in her mouth for a couple minutes on end as she tries to stuff down her tears. Neutered at work, trapped inside her enigmatic persona, and unable to lure Eve back into investigating Kenny’s death with the prospect of Villanelle’s murderous activity, she seethes with inarticulate grief.

The introduction of a never before mentioned daughter (Gemma Whelan, Yara from Game of Thrones) doesn’t help matters. It makes sense Carolyn’s other child would be, in her words, ‘hyper empathetic’ considering her mother is a pillar of stone. But it doesn’t make sense she would be so naive about the world her mother inhabits or the people in it. She becomes an unwitting accomplice in Konstantin’s gambit to spy on Carolyn, which becomes fodder for Villanelle’s sure to be violent reintroduction to the world of MI6.

Konstantin remains focused on getting home to his family in Russia, something he has put ahead of Villanelle for two seasons now. It seems hopeless, and I suspect his usefulness to the narrative, if Villanelle is truly going to grow (and the show) has an expiration date.