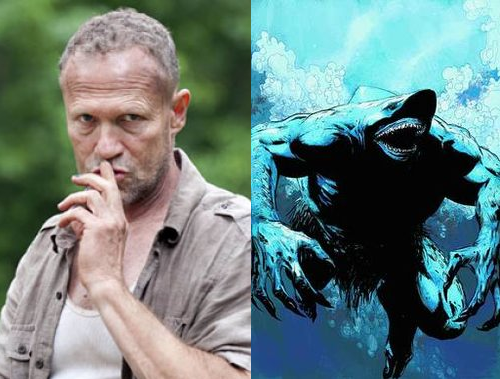 UPDATE: Michael Rooker has officially denied this report, claiming that he has not been contacted by DC Films for the part, as seen in the following screengrab:

The article, as it was originally written, will continue below.

The Wrap has a new exclusive about the development of The Suicide Squad, which confirms that Rooker has been having discussions with Warner Bros. and DC Films to lend his voice to a performance-capture character that will be brought to life by use of CGI. That character is King Shark (or Nanaue, his real name), an Aquaman villain that is a humanoid being with a shark’s head. He claims that his father is Kamo, the Shark-God, but others simply believe him to be a mutated human. As of right now, it’s not clear if Rooker will be on the set doing the performance-capture, or if he will just be lending his voice to the character.

Rooker will be joining a cast of returning characters from the first Suicide Squad and several that will be introduced on the big screen for the first time. Returning from the first Suicide Squad are Margot Robbie as Harley Quinn, Viola Davis as Amanda Waller, Jai Courtney as Captain Boomerang, and Joel Kinnaman as Rick Flag. New to the franchise are John Cena as the Peacemaker, Daniela Melchior as Ratcatcher, David Dastmalchian as the Polka-Dot Man, and Idris Elba as an as-of-yet unconfirmed character. With the main cast of anti-heroes rounded out, expect future casting updates to introduce the villains of the film as we get closer to the start of production.