‘How I Met Your Father’ Sets January Premiere Date 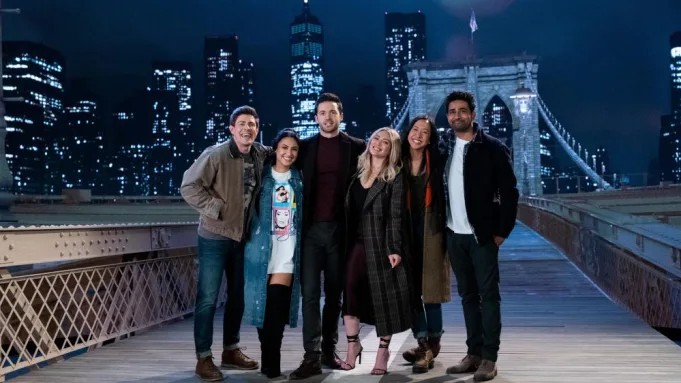 Finally, How I Met Your Father has landed a release date, and it is sooner than expected!

Yesterday, Hulu announced that the Hilary Duff spin-off series will debut on the platform on January 18, 2022. Check out the Twitter post, which includes the entire cast having fun with How I Met Your Mother references (which will probably abound in the show):

We couldn't keep you waiting any longer… 🤐 How I Met Your Father is coming January 18, only on @Hulu! #HIMYF pic.twitter.com/lfK6sVrQJQ

The series started filming in early August, and recently released the group photo seen above. In a Variety article, they explained they were the first to use the new StageCraft studio, named “Infinity,” at Disney’s Burbank lot. Pam Fryman, who directed the vast majority of How I Met Your Mother, and who has apparently directed more episodes than the premiere (as it was originally reported), said in a statement:

“I was able to spend the day in Burbank shooting a scene on the Brooklyn Bridge. The logistics and price tag of shooting on location (even when there’s not a pandemic) would have made this scene impossible — but thanks to this new technology the scene is in the can.”

However, it appears that How I Met Your Father only used the virtual environment for a limited amount of time, with the rest of the series being shot on traditional sets, much like the original show.

How I Met Your Father was created by Isaac Aptaker and Elizabeth Berger, who will also serve as writers. Hilary Duff is a producer as well as the lead, and the creators of the original series, Craig Thomas and Carter Bays, will executive produce the spin-off too. In addition to Duff, the cast includes Kim Cattrall, Chris Lowell, Tom Ainsley, Tien Tran, Francia Raisa, and Suraj Sharma.

Tags: How I Met Your FatherHulu