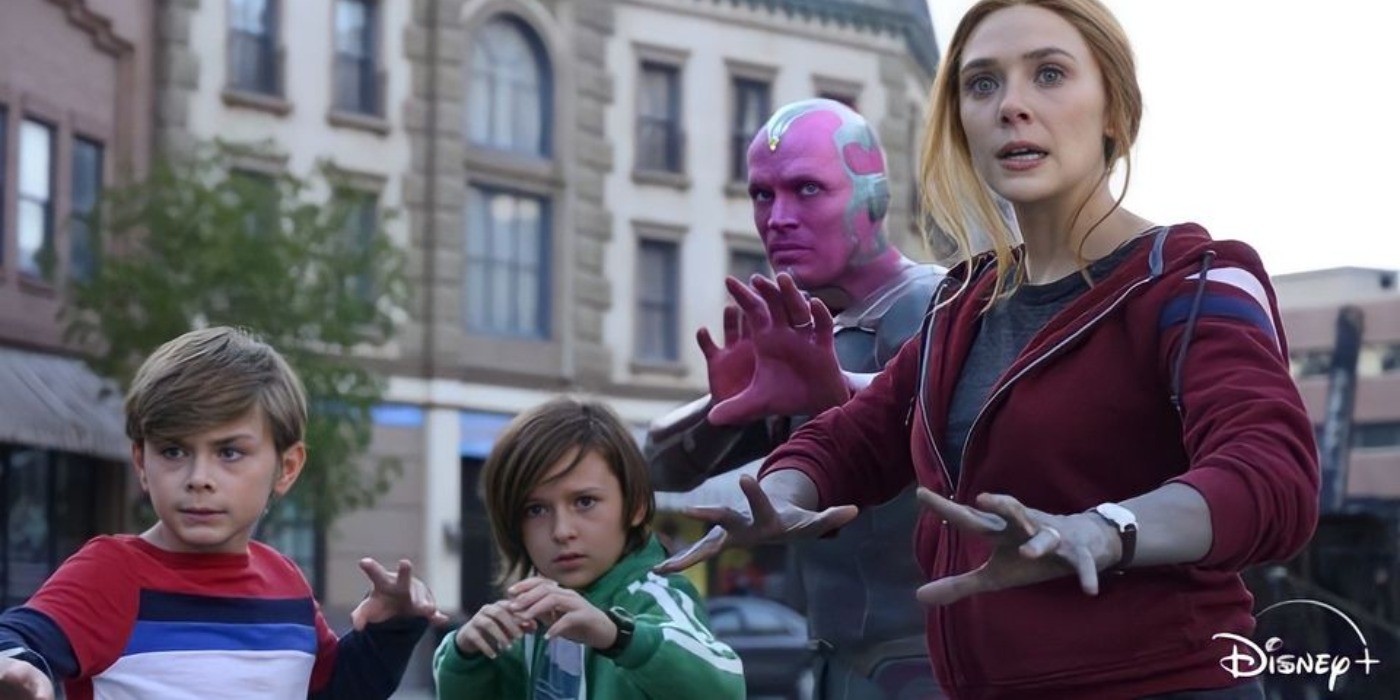 Everything comes to a close in Westview, perhaps neater than anyone could have expected for WandaVision.

There is a sense of discord in the finale of WandaVision – appropriately titled ‘The Series Finale’ – that is maybe natural. Grief isn’t something that can simply be wrapped up or left behind, and the process of living with it doesn’t happen all at once. The final episode feels like it skips a few steps in Wanda’s journey, but looking back, Wanda has been on this road for years.

The axis of the episode is the moment Wanda is confronted with the reality of what she’s done. The townspeople of Westview beg her to be released, and she compels them to stay because as gods are wont to do, she tells them she’s given them peace. When they reject it, she lashes out. This is typical for Wanda, whose anger and hurt manifests very often in violence.

Part of the discord in the episode is between expectations and reality – a final meta gambit by the outstanding creative team behind the series, including showrunner Jac Schaeffer and director Matt Shakman. Fans might expect massive events like Wanda using her power as she has done in the comics, particularly House Of M.

In that seminal storyline by writer Mark Waid and artist Oliver Copiel, Wanda erases the majority of all mutants from existence with a simple phrase: No more mutants. She does this when the fantasy of her children still being alive is burst. No such massive act happens in WandaVision, and there is no door opened to the X-Men.

That may well be disappointing to those who have developed complex theories. It’s half the fun, as often discussed on The Movie News Net podcast, but the real trouble is in the true concern of the series, which is Wanda’s grief and trauma. The battle in the town square between Wanda and Agatha Harkness leads Wanda to try and shut off The Hex. This has the immediate effect of fragmenting the illusions of Vision and worse, Tommy and Billy.

Wanda stops trying to abandon her fantasy and it’s here that you expect the series to confront its heroine once and for all. Will she abandon any consideration for others and preserve Westview for her family? Or will she accept her grief and let go?

This is a huge dramatic concern that the episode seems content to play out. The action starts immediately where it left off in episode eight, with Agatha threatening Wanda’s sons. The big MCU battle kicks off with no time wasted. Wanda and Agatha go to war, as do Vision and his reconstructed counterpart, White Vision.

The battle is big and satisfying, though the budget of the TV series probably shows some in the CGI, which is not as strong as the movies. People are very obviously computer-generated versions, and the choreography isn’t fantastic as the fight plays out across Westview.

But the climactic battle doesn’t disappoint, escalating to include a face-off with SWORD. Wanda is cornered, and worse, Agatha is draining Wanda’s power as she uses it. Monica Rambeau is trapped in the ‘man cave’ of ‘Fietro,’ in what turns out to be the biggest disappointment of the series. 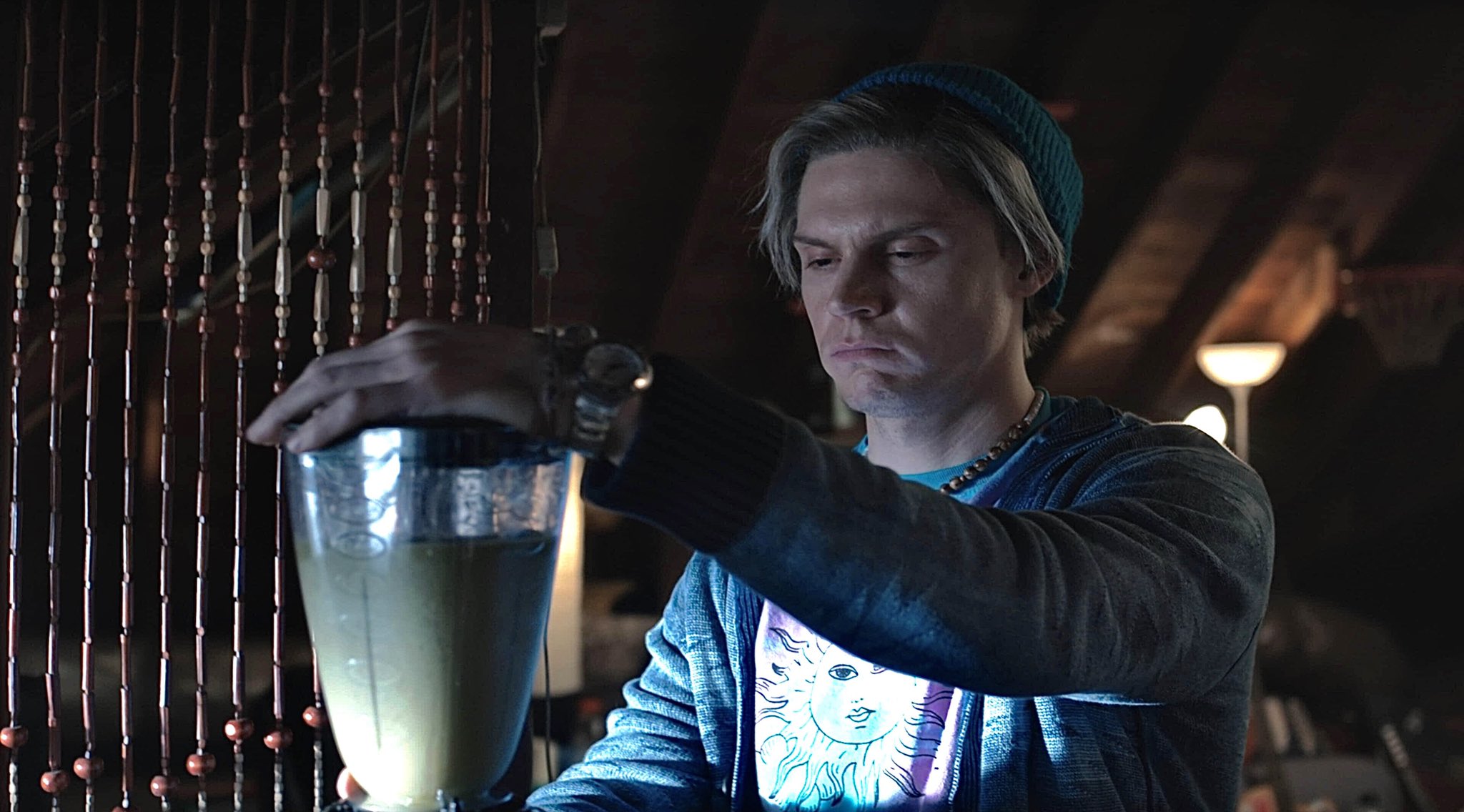 The mystery of ‘Ralph’ is solved at least. Fake Pietro is no one, and no connection it seems in the end to the Fox X-Men franchise. The huge leap into the multiverse that many expected, especially considering Wanda’s trajectory into Doctor Strange In The Multiverse Of Madness, may leave some feeling a little flat.

As Agatha says though, Wanda doesn’t know what she’s done embracing her power, and the ramifications of Westview will play out in the MCU for years to come. Certainly, they will relative to Vision, who convinces his colorless alter ego of his own humanity. There’s a great sense of resolution in the confrontation between the two Visions.

Vision unlocks the White Vision’s memories, and perhaps his humanity, allowing the character to continue in the MCU. This is more or less what happened in the comics after the White Vision was reconstructed from the dismantled original in the Vision Quest storyline in West Coast Avengers in 1989. 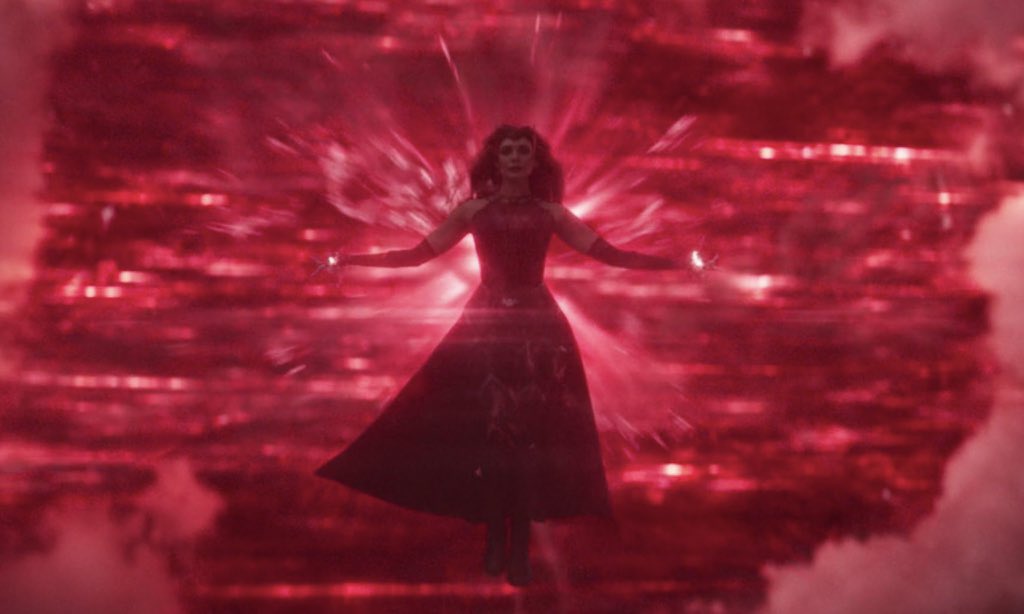 The resolution is less clean for Wanda. And that’s natural. Grief is untidy, and never complete. The dissonance between wanting Wanda to fulfill some aspect of her comic history – and as a bonus, some huge theories – conflicts with the need to spare her the characterization those comics inflicted on her.

Wanda was made a villain, and treated terribly in House Of M and beyond. Avengers and X-Men alike literally yelled at her and told her to stop grieving for her children, which was pathetic then and worse now. The show deftly avoids belittling Wanda for her pain, allowing her to live in it and process it on her own.

But we don’t really see that. She goes from deciding to maintain The Hex to letting it go without the big decision. The crucial moment. Perhaps it’s not necessary. No such moment exists in real life when it comes to grief. It’s a gradual thing, imperceptible, like snow melting on spring days. But without it, her decision to lift The Hex feels odd. 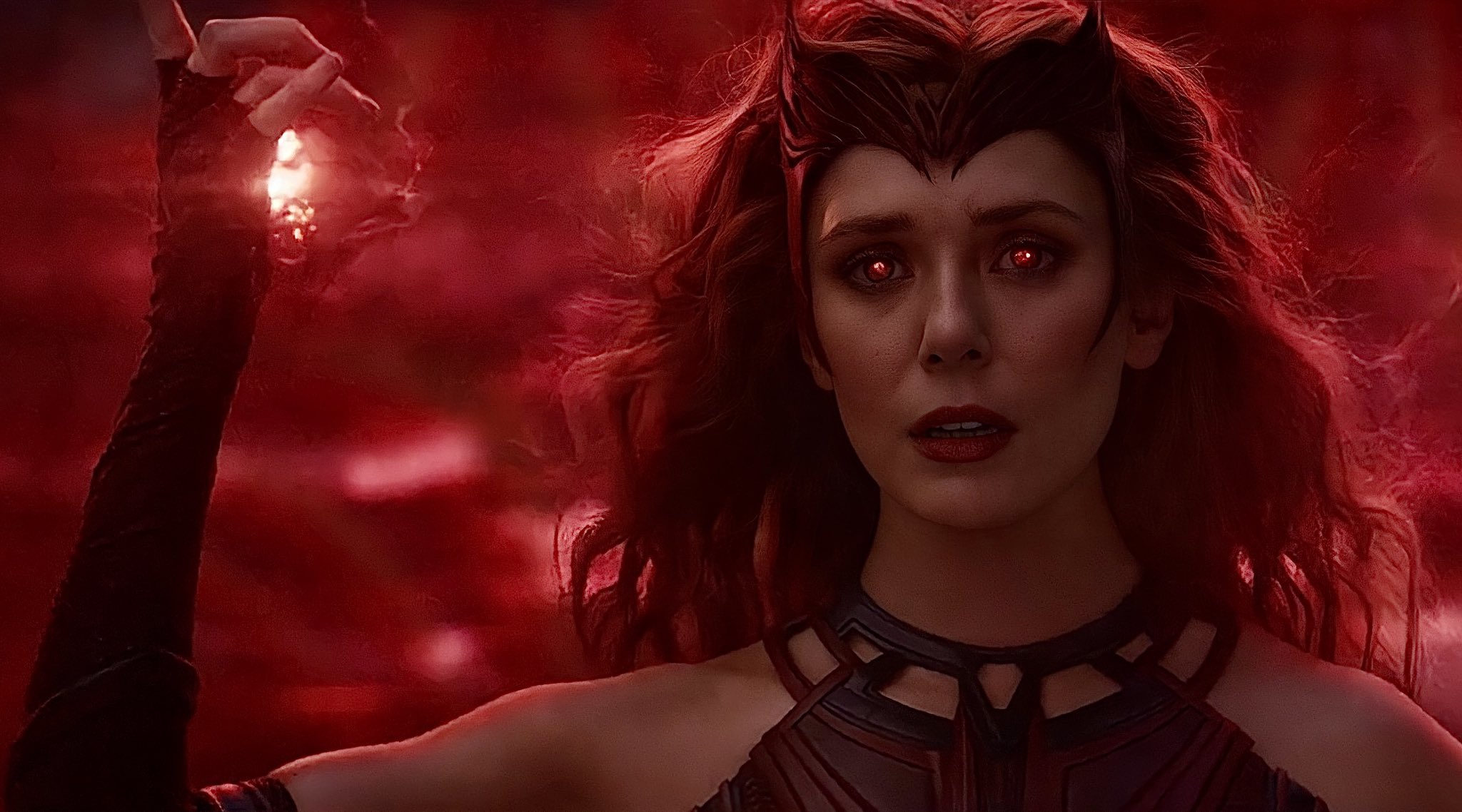 That’s underlined by the final scene between her and Monica. The two women share a lot in common – extraordinary pain, extraordinary power – and Monica tells her if she had Wanda’s ability, she would have brought her mother back. The major failing of the show, which is otherwise immaculate, is successfully bringing these two threads together.

This truth Monica speaks should have come out when she confronted Wanda in episode seven, and could actually have been realized better if Monica stayed in The Hex. But Monica serves the SWORD story arc, which in the end, doesn’t come off perfect either. Jimmy Woo is sidelined, and Darcy is almost completely forgotten.

The resolution of Director Hayward isn’t as grandiose as some might expect. He’s just a jerk who wants to kill Wanda – and her children – and his motivation is stated early on but never fleshed out. Another episode might have given all of these characters some extra tissue to work with. But it’s not their story. 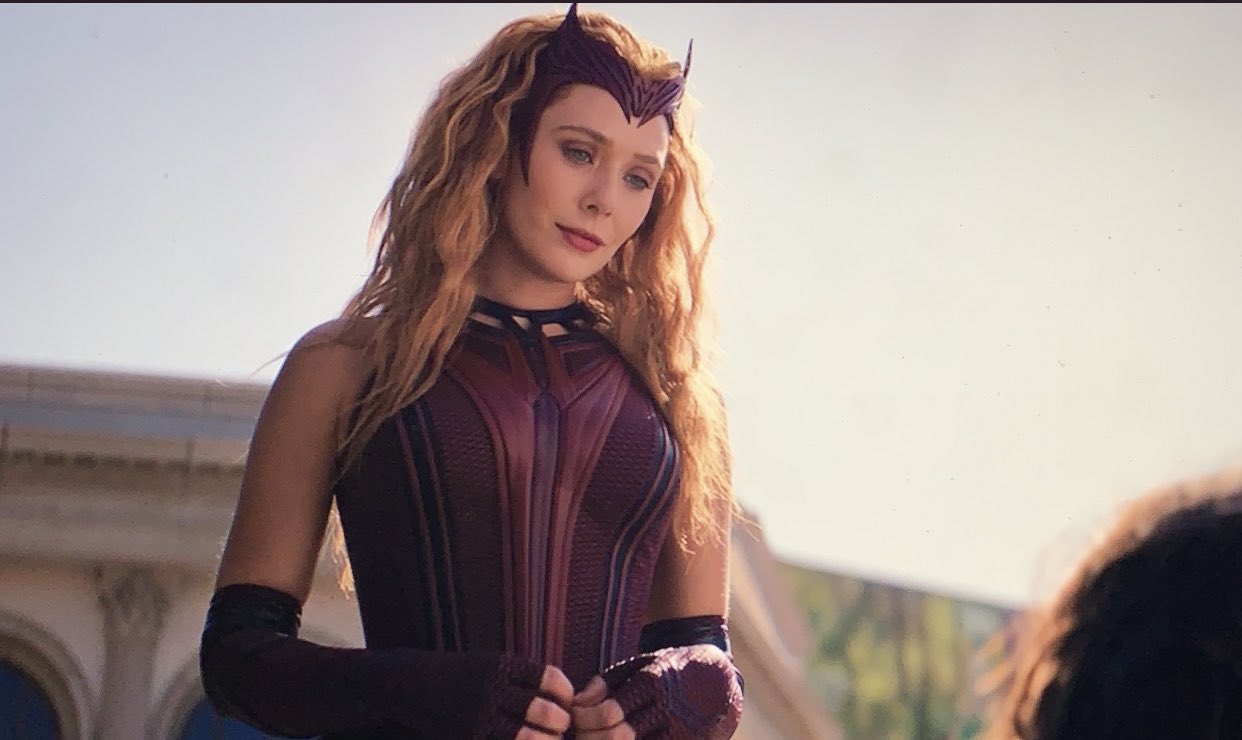 The story of WandaVision is Wanda’s, and it’s not over. Her grief will never find a true resolution, even if she relents and abandons her fantasy. She embraces her power and destiny as the Scarlet Witch, becoming the vision from the last episode in a moment that is certain to become iconic.

Wanting the MCU to grow, as it has so much in this series, and perhaps roll the dice on a downer ending clashes with the need to have Wanda find some peace. It might not sit right, but grief doesn’t, and looking back, the big act some Wanda wanted to commit in the series happens before it starts.

Wanda erupts in grief and pain, traps a town in her fantasy, and comes very close to killing people. She is at her lowest moment before the opening scene of episode one. Her journey in the series is the fallout from that, given in bits and pieces, in flashbacks and clues that will play differently on a rewatch. 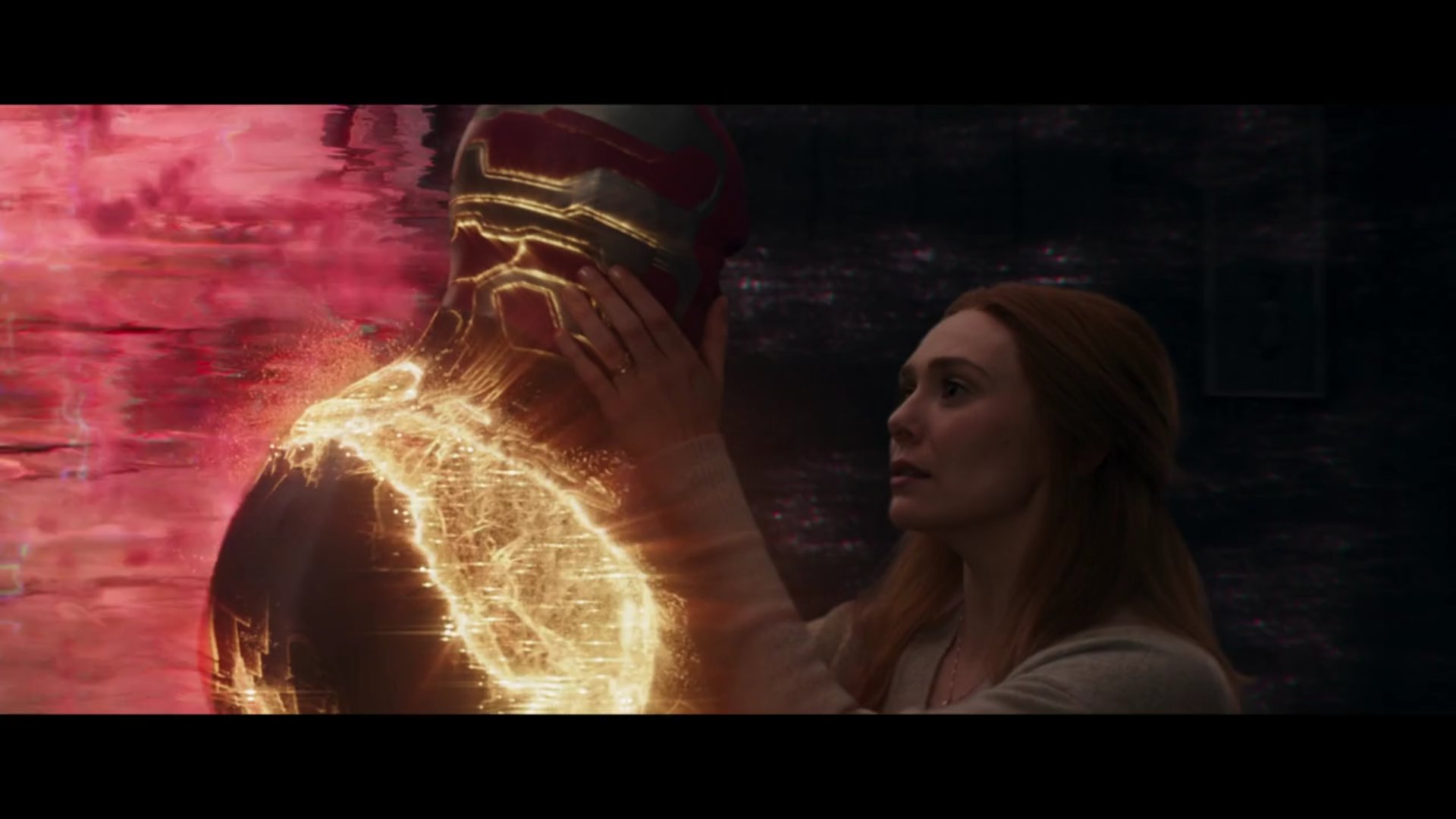 The story is far from over, with White Vision out there somewhere, Wanda on a journey to understand her power, and Monica Rambeau drawn into an even bigger mystery. WandaVision has been the most ambitious and successful entry in the MCU so far, with a deep focus on two brilliant characters, realized by two brilliant actors in Elizabeth Olsen and Paul Bettany.