‘WandaVision’ Review: A Welcome Throwback To A New Beginning 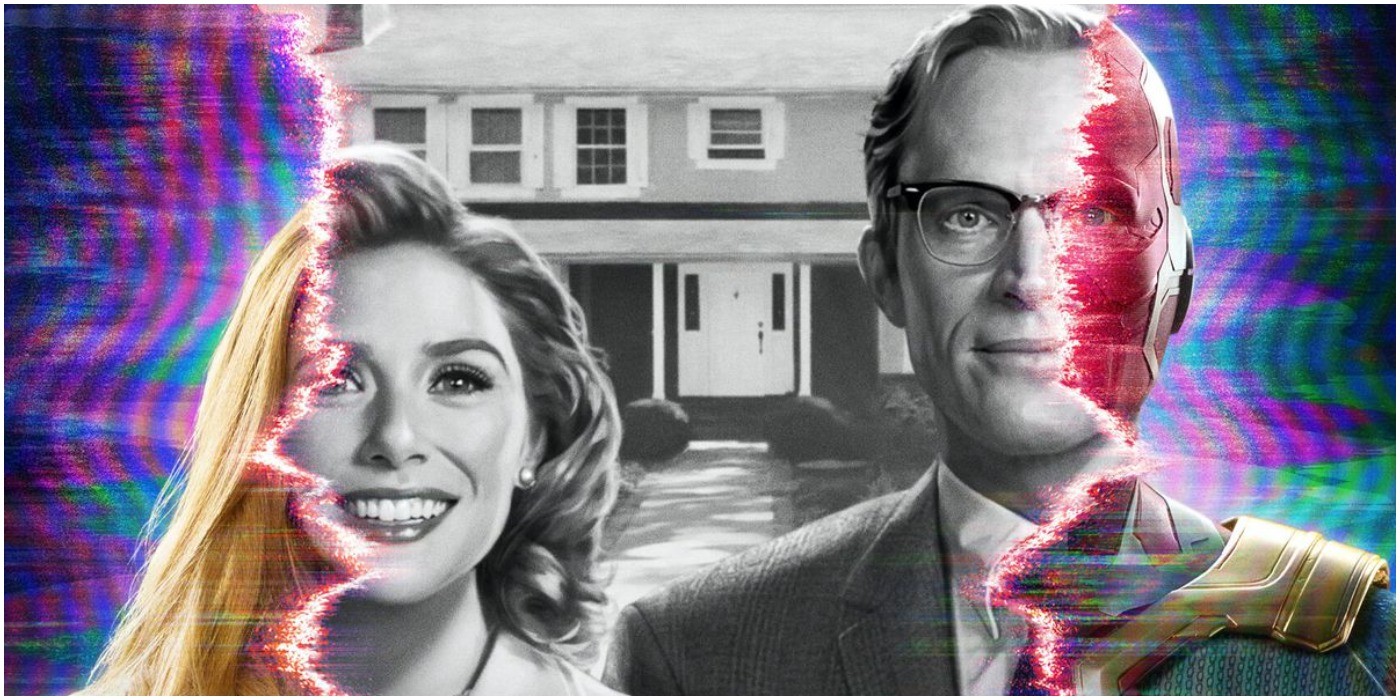 WandaVision could not be more different than everything that preceded it in the Marvel Cinematic Universe. Though Marvel fans likely want some comic book action comfort food after the last year or so, the smart, funny new series gives them something they actually need.

If you had told fans in the aftermath of Avengers: Endgame and Spider-Man: Homecoming that the next entry in the MCU would come over a year later and would be a black and white homage to 1950s era sitcoms like The Donna Reed Show and The Dick Van Dyke Show, they would have laughed at you. Thanks to a host of circumstances beyond anyone’s control, WandaVision marks a bold new era for the MCU in storytelling that is very welcome and appreciated for longtime fans of the movies and the comics they’re based on.

The first two episodes of WandaVision are a bold gambit by the MCU to not just take advantage of its new sandbox on Disney+, but chart out a new frontier after mapping just about the full extent of what is possible within the context of the superhero movie. WandaVision doesn’t feature a single fight or chase scene but instead focuses squarely on two of the MCU’s most appealing secondary characters, Wanda Maximoff (Elizabeth Olsen) and Vision (Paul Bettany), one of whom is supposed to be dead.

WandaVision doesn’t provide any recaps or hand-holding. We’re thrown right into the situation, or in this case, the situational comedy. The first episode, directed by Matt Shakman and written by head writer Jac Schaeffer, has the couple arrive in their new suburban home of Westview. They’re newly married and living inside a sitcom complete with a laugh track. The conceit is lifted straight from The Dick Van Dyke Show and other 50s shows that offered a warm if rigid view of domestic life in America at this point in time. 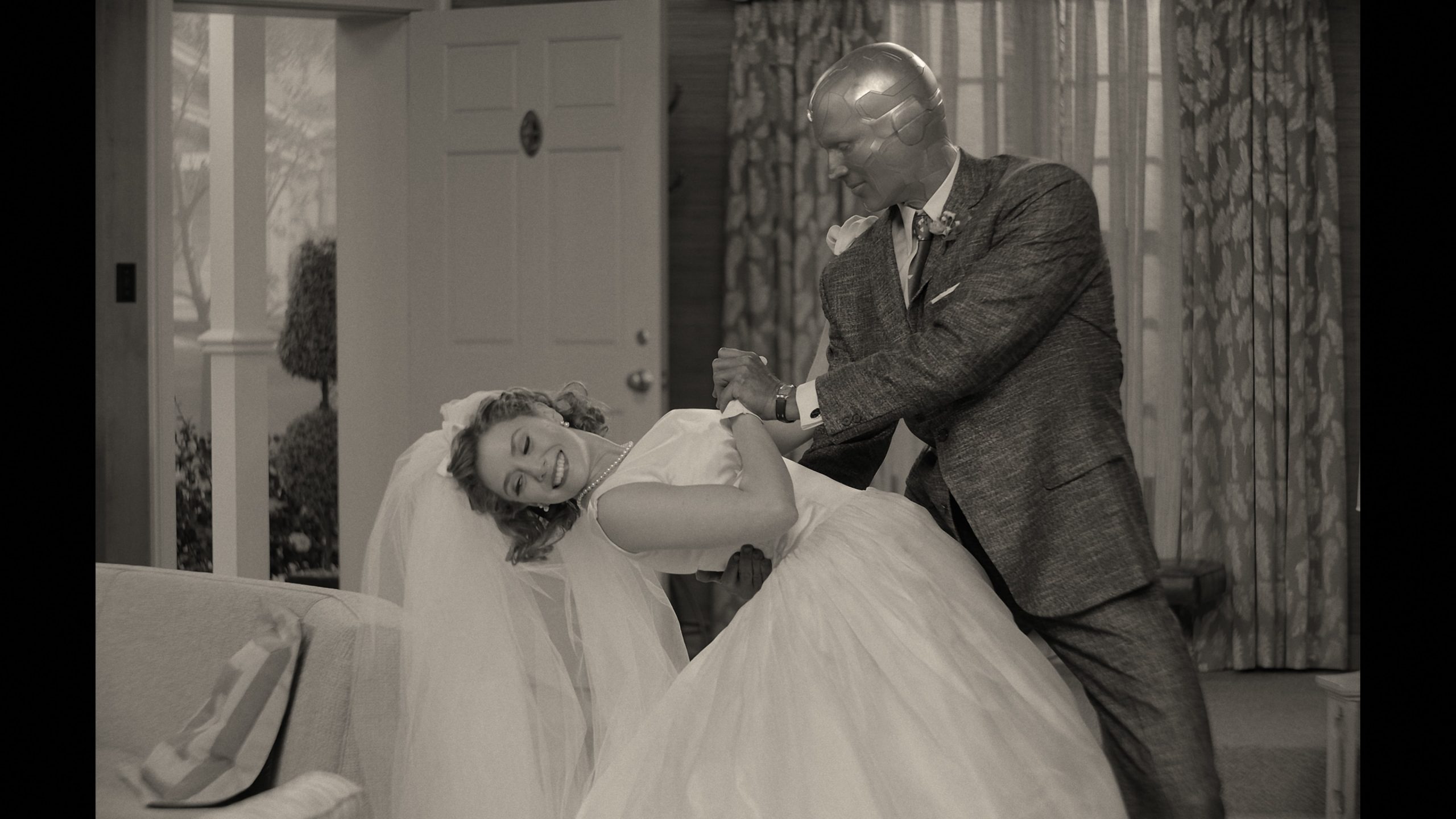 SPOILERS from here on out.

The episode plays it completely straight, with the couple adjusting to their new home and circumstances in an awkward but familiar fashion. Wanda gets to know her busy, brassy neighbor Agnes (a sparkling Kathyrn Hahn). Vision goes to work in an office where it’s unclear what they do. He tries to impress his boss, Mr. Hart (Fred Malamed), and his wife, Mrs. Hart, (Debra Jo Rupp, who knows something about throwback sitcoms).

The confusion over the dinner date and the couple’s desperate comical attempts to fit in make for traditional sitcom tropes, but underneath it all, there is the creeping sense of something being very, very wrong. The first episode doesn’t delve too deep into the mystery of what is going on or why, instead allowing an unease to build through intentionally hammy dialogue that contains cryptic clues. Wanda seems to know something is off, as she is the most aware that neither she nor Vision can remember details about their former life.

This becomes stark in the dinner scene when the laugh track and the pretense of the sitcom falls away. Mr. Hart chokes on his dinner and Debra Jo Rupp provides a wonderful if disturbing performance as she begs her husband to stop choking, but is actually imploring Wanda, or perhaps someone else, to intervene. Wanda eventually does, abandoning her sitcom persona for a more sober Wanda we’re familiar with. Vision saves his boss by phasing the food right out of him. 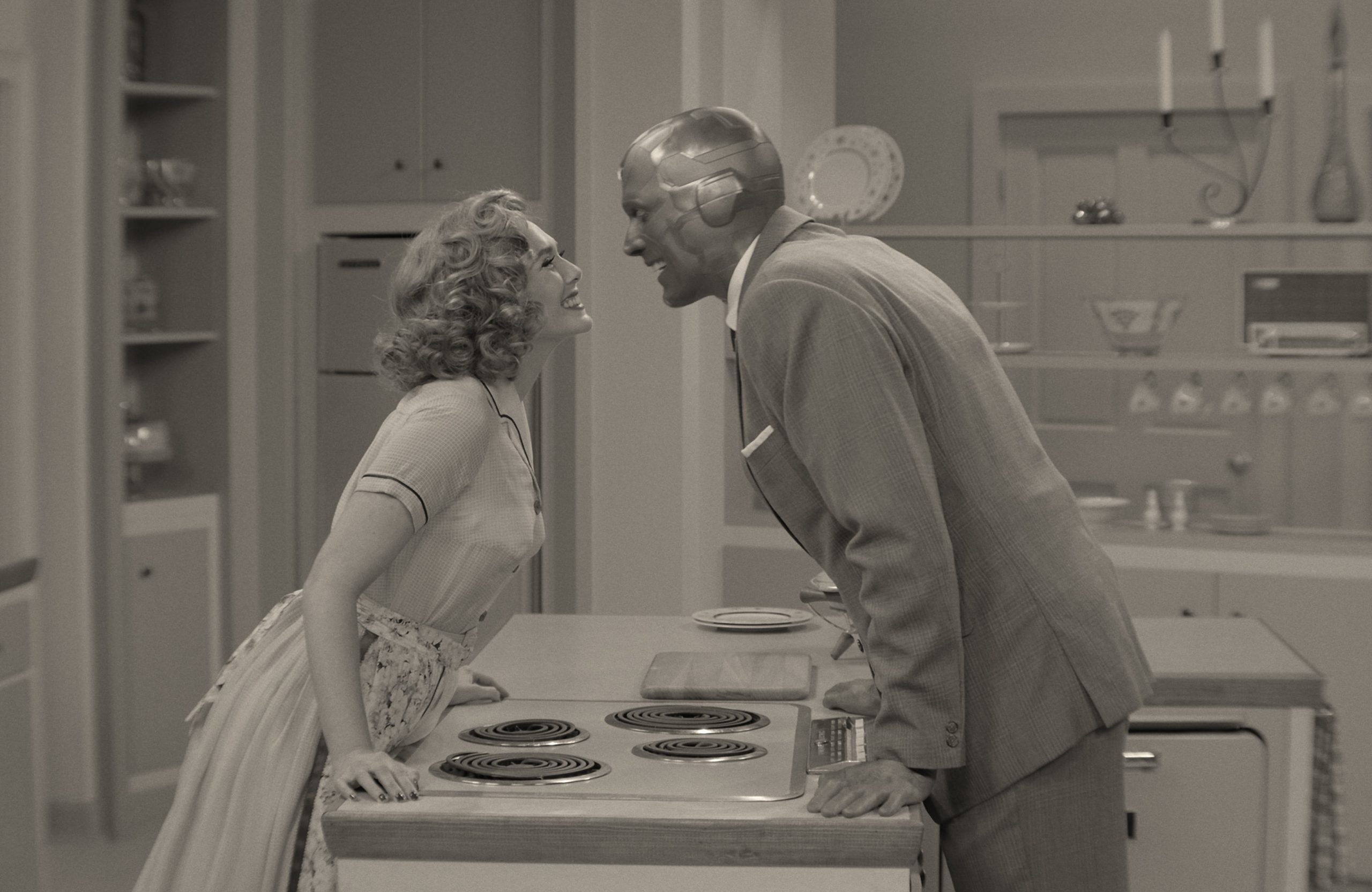 Something is clearly wrong. As the credits roll on the first episode, with the couple secure into domestic bliss, the camera pulls out of the TV show literally and figuratively into the diegetic present of the MCU. Someone is watching Wanda and Vision on a TV, and judging from the symbol on their journal, belong to an organization called S.W.O.R.D. S.W.O.R.D. has a long history in the comics, but deal primarily with cosmic threats, so their involvement here begs a lot of questions.

WandaVision isn’t in the mood to give any answers, but the mystery accelerates in the second episode, written by Gretchen Enders. The timeline advances into the early 60s, and squarely into Bewitched territory. Wanda and Vision take part in a community talent show with a magic act that predictably goes wrong. A loud knocking sound outside the house sets an unsettling tone in the episode, which builds off the concept established in a movie like Pleasantville to use the black and white homogeneity of 1950s America to reveal the hidden, ugly truth beneath.

It’s notable that it’s not until the second episode that anyone of color appears. WandaVision doesn’t have the reach or ambition of shows like Lovecraft Country, which tackle the stark reality of this era head-on, but as a series confronting the nature of reality, it does what it can as quietly as it can. That may show the ultimate limits of the MCU format, even as this show tries to stretch them out. But the world of Westview becomes more diverse, and realistic, as the show progresses out of its heady bucolic 50s fantasy. 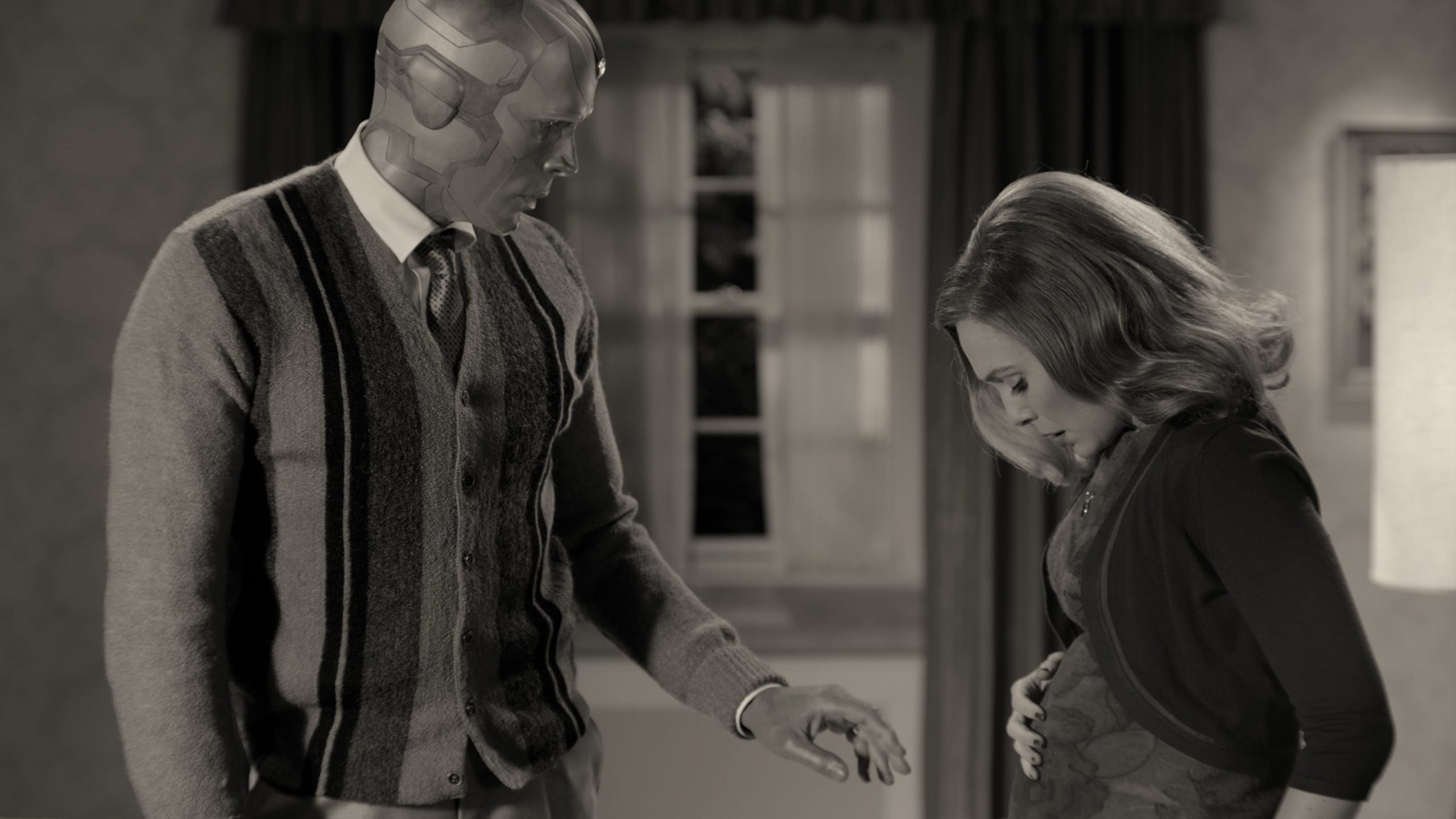 Teyonah Parris makes her debut in the second episode as ‘Geraldine,’ though it’s generally known that she is actually playing Monica Rambeau, last seen as a child in Captain Marvel. She seems equally perplexed as to why she’s in Westview and the talent show serves to show that everyone in the community might be some kind of prisoner. Dottie, played by the always great Emma Caufield, rules the suburban housewives with an iron fist, drumming them into silence and submission.

But it’s Dottie’s unsubtle push for conformity that exposes the first real crack in the false reality of Westview. A radio bristles with a message for Wanda. “Who is doing this to you?” The interruption unsettles both Wanda and Dottie, but both continue on, clinging to their fantasy. Wanda seems determined, even as that tree continues to bang against the house and nothing goes right. Vision chews on a stick of gum and in a great bit of comedy, ends up basically drunk as he performs in front of the entire town in the talent show.

Elizabeth Olsen and Paul Bettany are a delight in WandaVision, with their charm and chemistry finally coming to the fore in a way that wasn’t possible in the movies. Olsen in particular dives headfirst into the TV wife, blending a range of classic sitcom characters like Donna Reed, Mary Tyler Moore, and most importantly in these first two episodes, Samantha from Bewitched. The idea of them living in a sitcom owes some debt to the 2015 Vision comic book series by writer Tom King and artist Gabriel Hernandez Walta, but the show goes places the comic simply couldn’t. 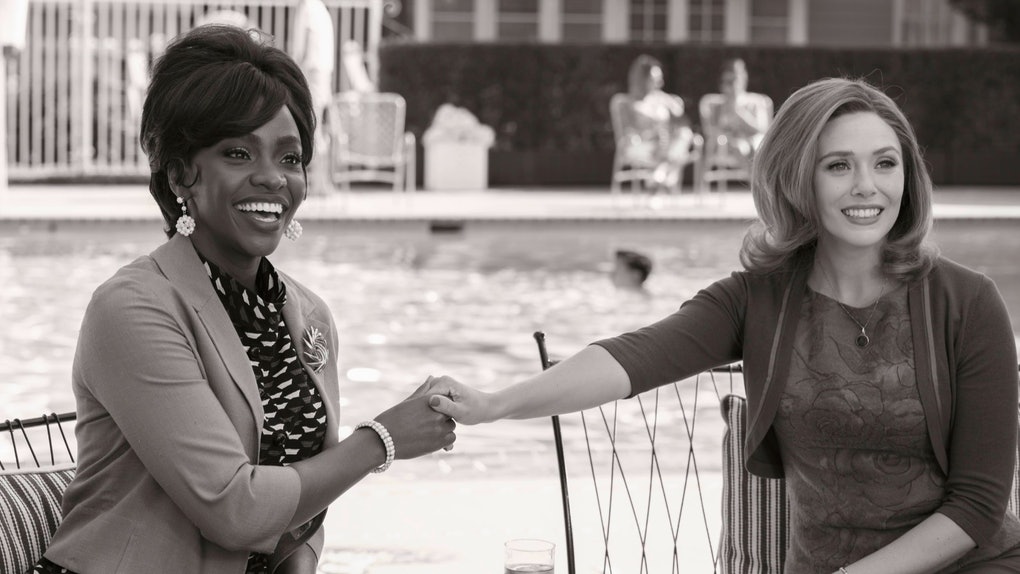 The effortless fusion of the evolving sitcom genre with the fantastic, first pioneered in Bewitched, forms the bedrock of this unusual show and becomes plain in the second episode. The animation interludes, the scramble by Wanda to keep her magic a secret from her community, it’s all there. The only thing Elizabeth Olsen doesn’t do is wiggle her nose. As the episode closes, with their place in the community secure and Wanda now pregnant – more on that in a minute – reality continues to crack.

The knocking sound returns and this time the couple goes outside to confront it. It’s not a tree, but a manhole cover. Someone comes out from beneath it, cocooned in a swarm of bees and wearing an outfit emblazoned with the S.W.O.R.D. logo. And then the mystery deepens. “No,” Wanda says, and the show literally rewinds to the happy scene a few moments before. It doesn’t seem someone is doing this to Wanda after all. She appears to be in some kind of control.

It’s never too early to speculate, as MCU fans well know. This facsimile of domestic bliss may be Wanda’s way of dealing with the trauma of Vision’s death in Infinity War. How that plays out, and how it relates to S.W.O.R.D., remain to be seen. We already know that it will have major repercussions, as Wanda will appear in Doctor Strange In The Multi-Verse Of Madness, and the Multi-Verse is going to feature heavily in the upcoming third Spider-Man film. 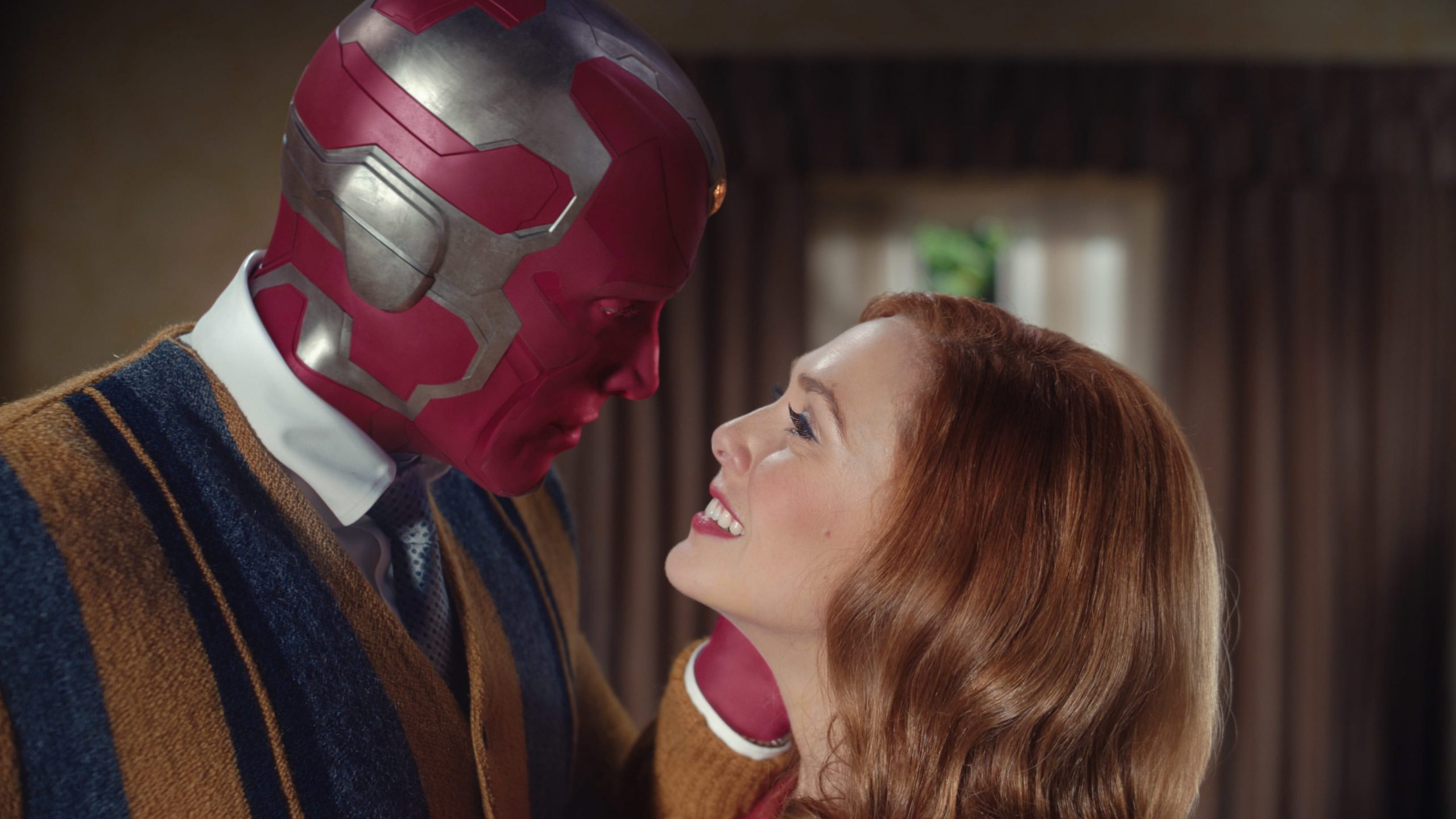 It’s the children that is the most compelling aspect of these first two episodes. Or specifically, the lack of them. The talent show is for the children, as Dottie says, a proclamation that becomes an unnerving mantra in Westview. But there aren’t any kids. None attend the show and none are visible anywhere in the idyllic town. Far beyond what is happening to Wanda, or what she’s doing, the mystery of Westview’s children would seem to be the object of the entire series.

It remains to be seen whether Wanda’s pregnancy is another aspect of the fantasy or something more literal. It’s worth noting that Scarlet Witch and Vision did have children in the comic books. Their twins, Thomas and William, were ultimately revealed to be a cruel magic trick. This left Wanda so bereaved that it led to the event that now defines her: “No more mutants.” Her construction of an alternate reality in the House Of M comic storyline, coupled with the cataclysmic consequences for mutants, bodes huge for the future of the series and the MCU.

Fans can get more insight into the series with a new featurette. It offers a look behind the scenes and a glimpse at what’s to come in Marvel Studios’ WandaVision. It’s streaming now and the first two episodes of WandaVision are now streaming exclusively on Disney+.