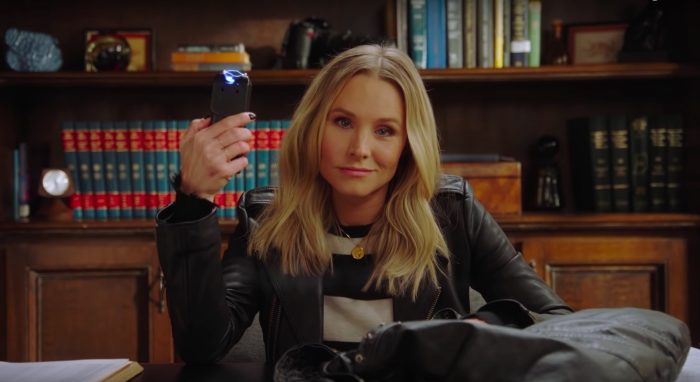 It’s been about a month since we were treated to a teaser trailer for the return of Veronica Mars. That teaser was pretty light on details, but now the official trailer has given us a bit more story info.

Veronica Mars had a 64-episode run on UPN and The CW from 2004 to 2007. While the show itself was cancelled and ended the series on a dour note, but series creator Rob Thomas would later continue Veronica’s story in a $6M movie that was primarily funded by fans via Kickstarter, a move which ultimately proved to be successful once the film was released in 2014 with a limited run in theaters and a subsequent release to Blu-Ray and DVD. Thomas explained that after the success of the series, he would be open to telling new stories with Mars covering more serious cases then she did while she was in high school. And here we are, in 2019, with Hulu’s show doing just that.

The new trailer reveals that Veronica Mars is now working as a private detective in Neptune, which is experiencing a crime wave during Spring Break. There’s a big explosion, which is presumably the event that gets Veronica looking into whatever conspiracy is unfolding in the seaside Spring Break destination.

The trailer shows a Veronica very much leaning into actress Kristin Bell’s wittier side, and true to form, she is carrying the appropriate weight of someone who had to uncover the mystery behind the death of her best friend when she was in her teens. It also gives glimpses of new characters played by J.K. Simmons and Patton Oswalt, as well as several of the returning characters from the original series.

The teaser trailer confirmed that the fourth season of Veronica Mars fourth season would return starting on July 26, 2019, streaming exclusively on Hulu.