‘The Falcon and the Winter Soldier’ Episode 5 Review – ‘Truth’

The fifth episode of The Falcon and the Winter Soldier is the perfect follow-up to the previous four, not just the last one, and the perfect setup for the season finale.

Once again directed by Kari Skogland, but written by Dalan Musson this time around, Truth brings together everything that has happened so far, builds upon it, and continues every story in a natural way. And they also add a very cool cameo to the mix. Let’s discuss it in general, non-spoilery terms before we move to the grittier details.

I’ve discussed before how The Falcon and the Winter Soldier is essentially structured as a three-act movie, with each pair of episodes being each act. This is clearly seen if you look at the way each episode ends. Both episode 2 and 4 end with one of the main characters making an irreversible choice that will move the story along — in The Star-Spangled Man, Bucky and Sam finally decide to include Zemo in the picture, while in last week’s The Whole World is Watching, well, we all know what bloody happened.

Episodes 1, 3, and 5 act as a mid-arc point, with our characters picking up what happened before and building up to something that will be explored later. Truth follows that exact same model, making it a very consistent episode within the series, but also making us want to see the finale even more.

This episode is yet another proof of the excellent writing on display in the show. Every main character was presented with the more complicated, and at the same time more interesting, storyline, but to discuss that, let’s move into spoiler territory.

Spoilers for The Falcon and the Winter Soldier Episode 5 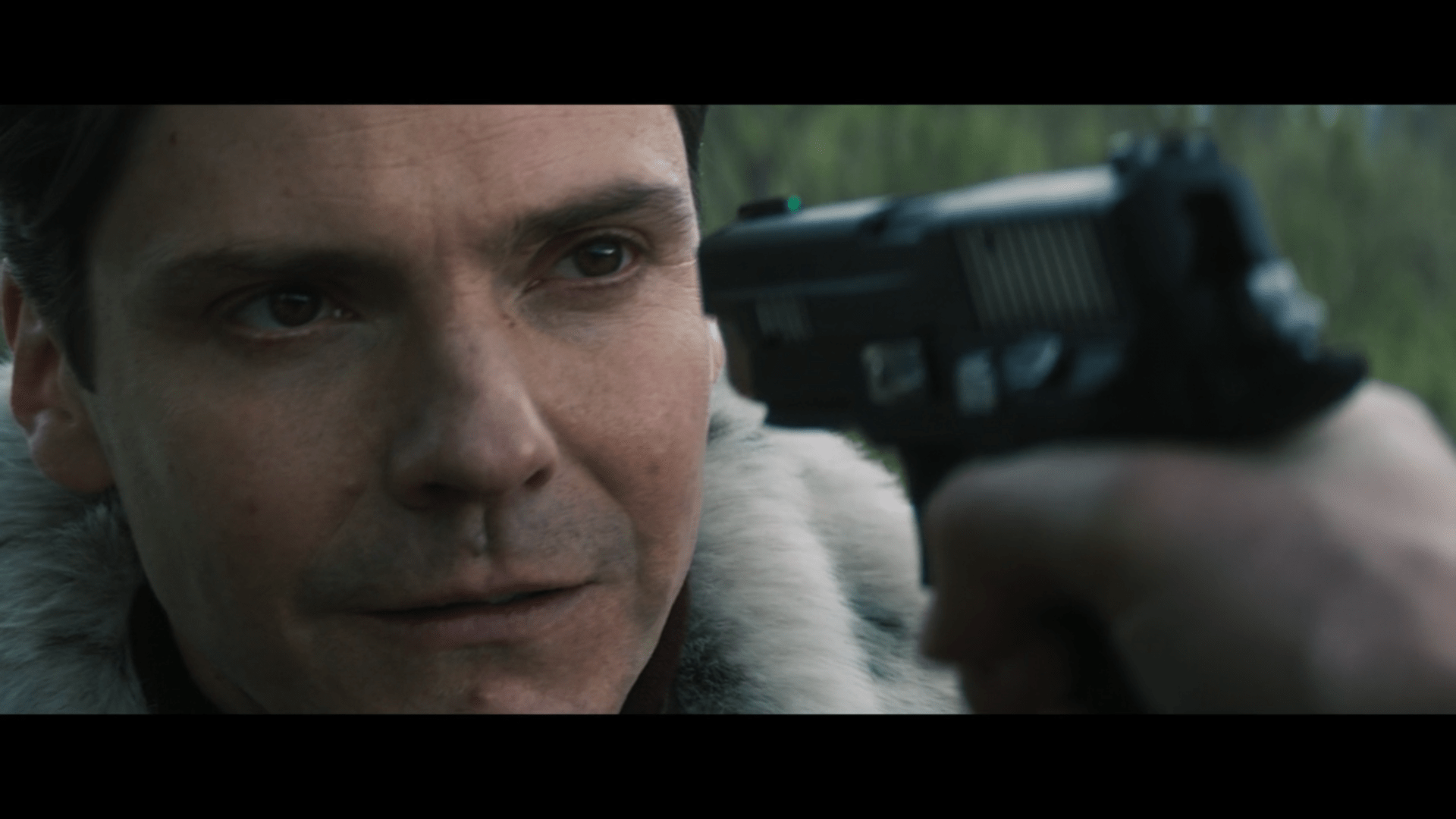 After that tremendous final shot from last episode, there were two ways the story could go: either the U.S. Government would back John Walker and defend his actions, which were recorded by dozens of people with their phones (and witnessed by Sam and Bucky first-hand), or they would punish him publicly. The former would have been a logical step — the guy who was killed was part of a criminal organization labeled as terrorist, and they’d just killed a U.S. military agent. The degree of violence was certainly not justified, but we’ve seen countless times in movies and TV similar situations, in which the people in charge spin what happened in the way they want.

That is not the route the writers took, though, and in retrospect, I’m glad they didn’t. They opted for the way that challenged John Walker the most — if the Government had backed him up, that wouldn’t have represented any emotional difficulty, and there wouldn’t be any arc or even consequences to his actions. They decided to turn everything John Walker believed in, and furthermore, everything John Walker was, on him. That hearing was one of the most heartbreaking moments of the episode, because, above all, there was one uncomfortable truth: he is right.

He wasn’t doing the right thing when he used the shield as a murder weapon in the way he did, but up until that point, almost his entire personality had been shaped by the military, the same people who are now accusing him of being brutal and even non-American. Nobody puts into question that he has a lot of good qualities, and that’s precisely why he isn’t facing more severe consequences, but it was the Army who built upon that to create a murder weapon. Much like Fran pointed out last week, we now see more clearly than ever why Doctor Erskine was so specific about finding the one good man.

This series was making our characters struggle with that idea up until this point — what made Steve so good? The fact that he jumped in front of a grenade? That’s not unique, apparently. What made him so good was something deeper, harder to quantify or put into words. He simply was Captain America, through and through. John Walker is just playing to be. But who can blame him? They taught him everything that he needed to learn, but that didn’t prevent him from stepping out of the line. 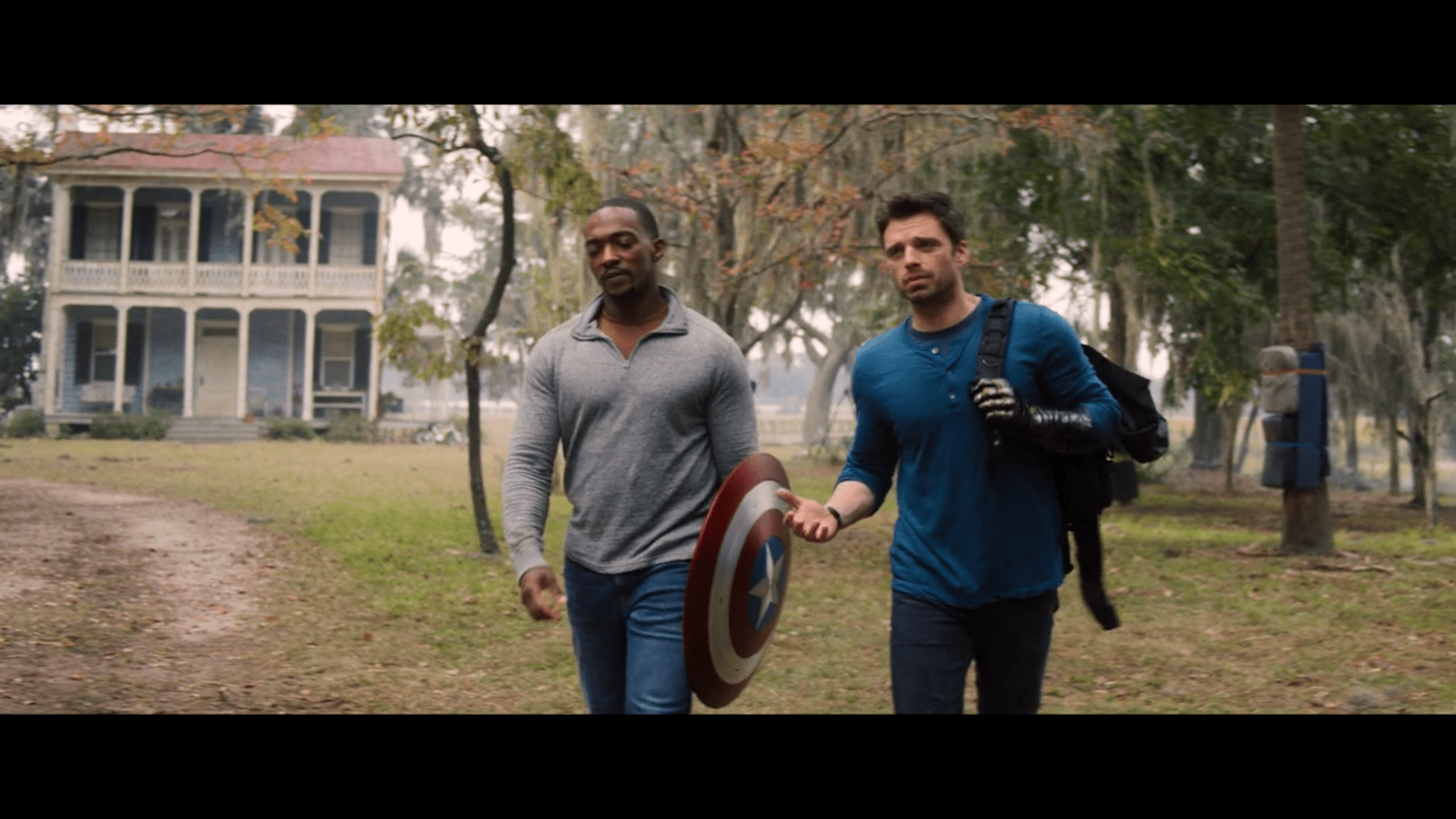 Running the risk of jumping back and forth through the episode, let’s move this discussion to the next step in the shield’s legacy. Sam, who never gets tired of carrying it around and giving it to other people, goes to visit Isaiah Bradley, who gives him the final motivation. No black man will ever be able to carry that shield, according to him, because the United States of America is not yet ready for a black man symbolizing everything that symbol and those stripes represent. Well, like good old Ryan Gosling liked to say in La La Land, “not on my watch.” He decides to honor both Steve and Isaiah by assuming the mantle of Captain America.

By doing this, the excellent show has found another way to honor Steve Rogers as the ultimate man. The MCU spent many years building him up as the guy who everyone should aspire to be, and finally, in Endgame, they paid that off. Every ideal Captain America stands for was displayed in that movie, and every time that happened, it was a callback to earlier moments in the MCU. It’s not that he can go around all day saying “I could do this all day,” like he proved to us when facing his 2012 self. It’s the fact that he never loses hope, in humanity, in his team, and in himself. He was the only one that after five years didn’t lose hope that, one day, it would all go back to normal. Furthermore, he never gave up on Peggy Carter, and those final moments in Endgame proved it — the tears running down my face every time that damn song starts playing can vouch for that. 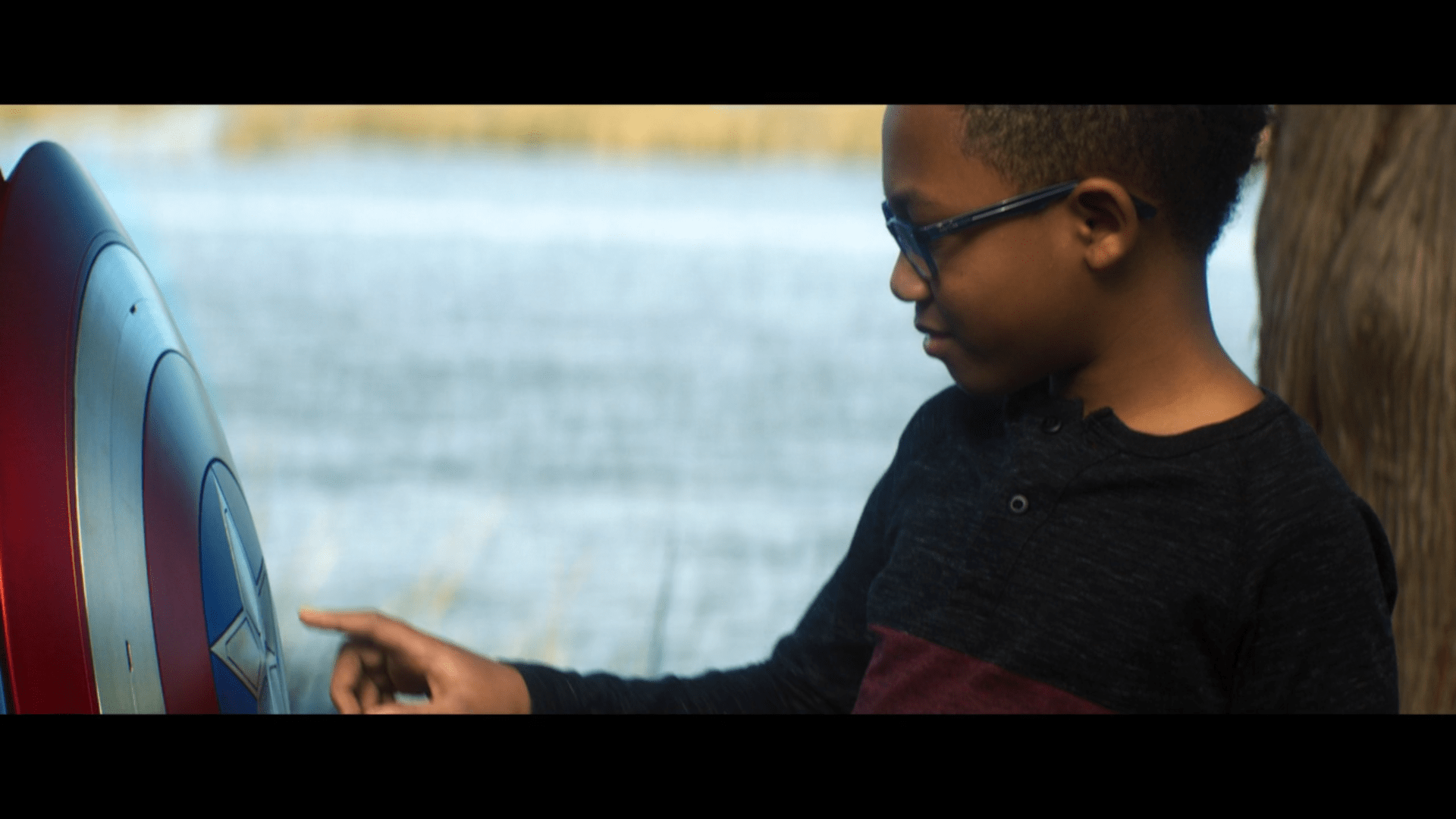 Markus and McFeely wrote several incredible payoffs in Endgame for Steve’s journey, from him picking up Mjolnir, to having him tighten the shield to his arm as he gets ready to face Thanos’ entire army by himself. And then, the entire MCU said, “ok Cap, we’ll take it from here.” That scene will be talked about for many decades to come and will be one we’ll tell our grandchildren that we witnessed the day the movie opened.

What is my point? That the homages from Marvel writers to Steve didn’t end there, and this entire show is a homage to that character and his ideals. Here is the truth — Steve Rogers is the moral compass of the MCU. Whenever you have a question about what is right and what is wrong, what to do and what not to do, you ask him. He won the Civil War before it even began, and it took Tony Stark many punches and having his best friend suffer a near-death injury to realize that. And whenever he made a choice, he was making the right one. Nobody questioned him going back in time to live the life he always wanted, and that’s not because he was madly in love, but because everybody assumed it was the right choice because he made it. 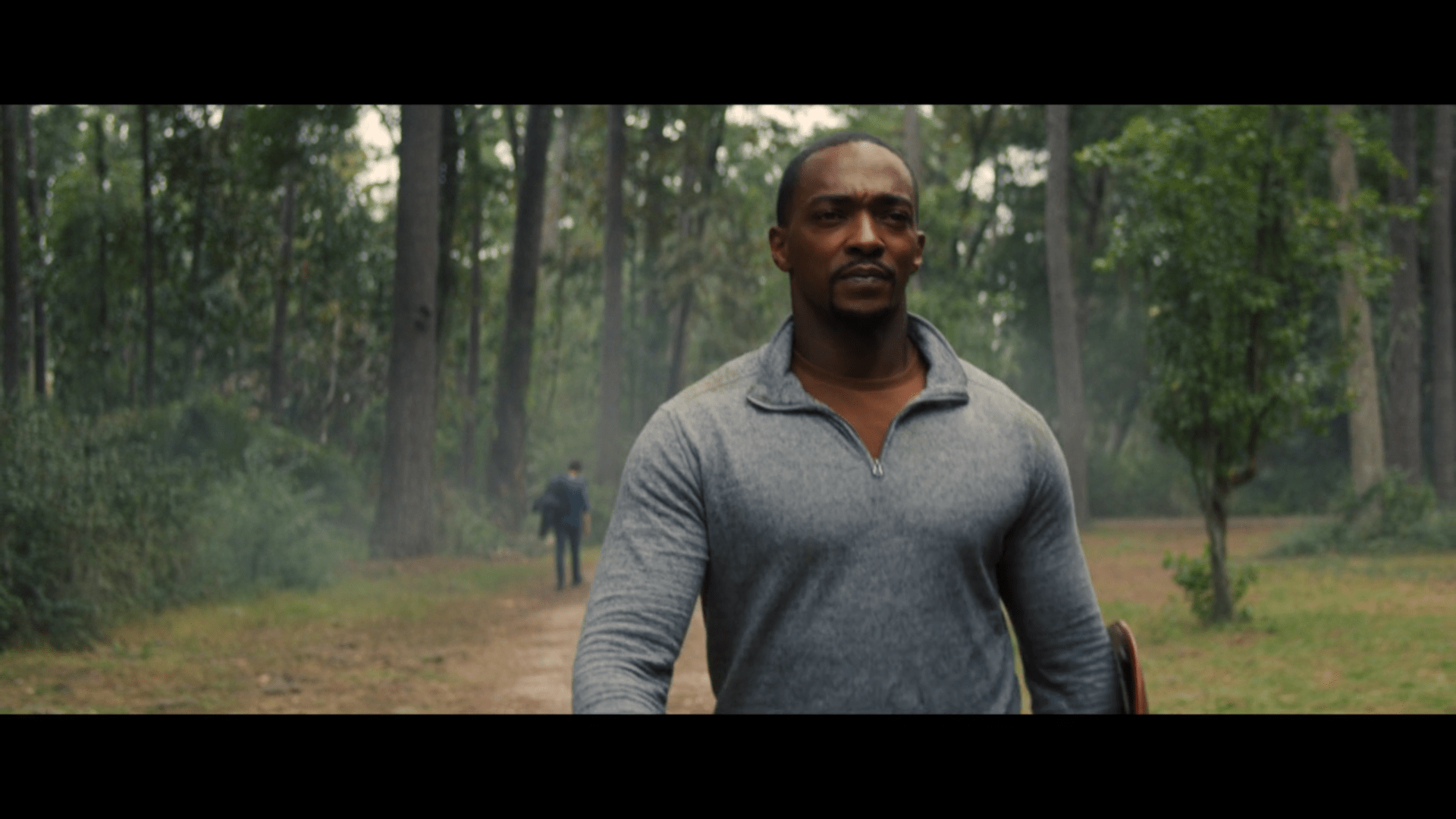 Bucky knew that, and that’s why he always kept in mind that Steve Rogers believed in him, which is why he kept believing in himself. He made that very clear in Episode 2, but Bucky’s mistake in that episode was thinking that Sam Wilson could know better than Steve. He couldn’t, and the show has more than proven that. Steve chose Sam because he believed he was the next best person after him to embody those ideals. Sam didn’t believe him, and he was proven wrong.

John Walker is the next best thing to Steve Rogers that the military found, but Steve didn’t look for the best soldier, he looked for the best person. Everything that happened in The Falcon and the Winter Soldier up until this episode was proof of Steve’s point, and when Sam finally understood that, he was ready. Kari Skogland deliberately chose not to show what’s in the box at the end of the episode, but we can only assume it’s the next costume of Captain America, a.k.a. Sam Wilson now. 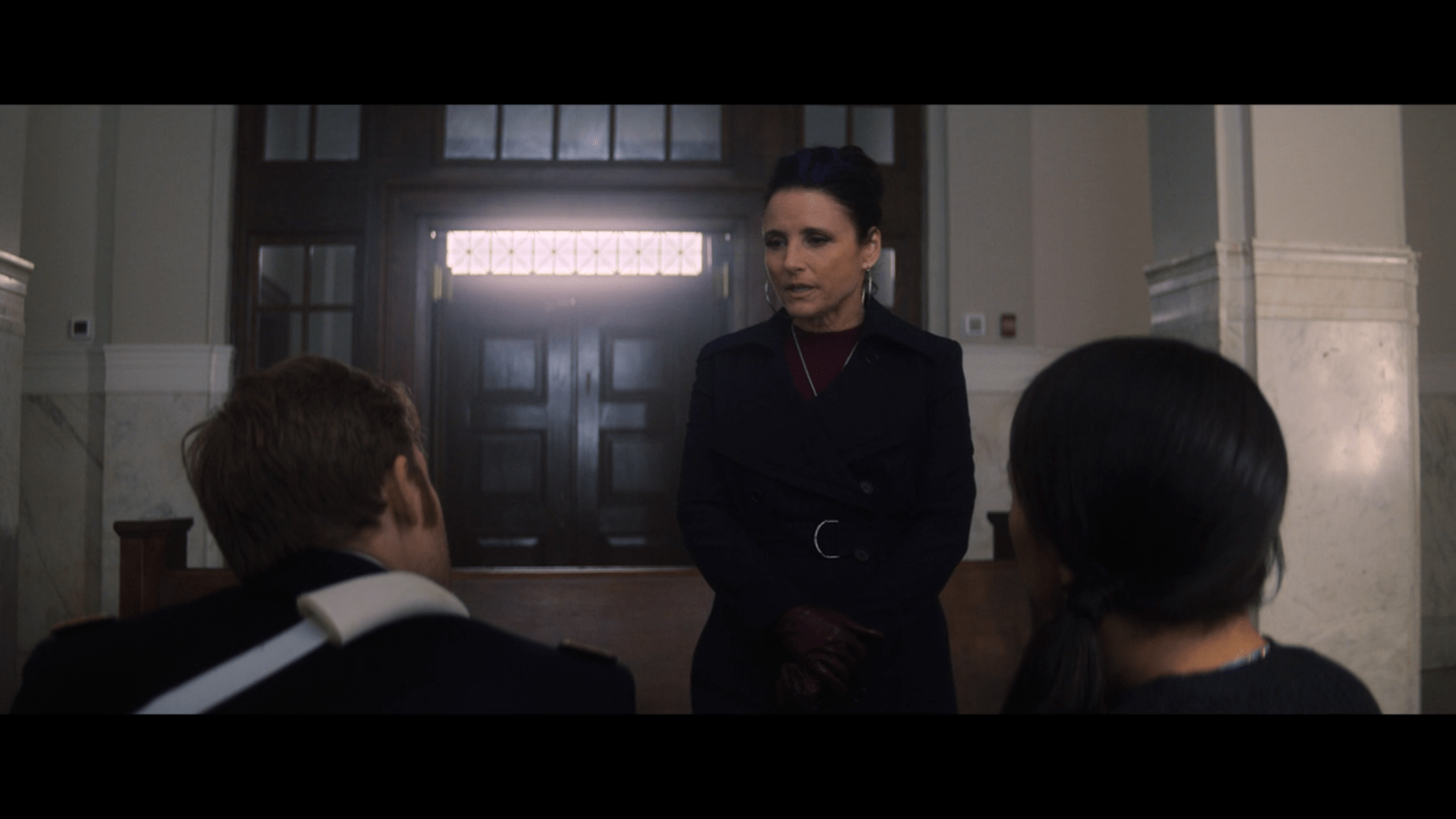 Enough about Captain America already, and let’s talk about that cameo. Word about a very cool and important cameo in the fifth episode has been out for several hours, but it’s probably one that nobody expected. Fifteen minutes into the episode, the MCU officially welcomed 11-times Emmy-nominated actress Julia Louis-Dreyfus as Contessa Valentina Allegra de Fontaine. Nobody had been able to report on this casting, which is both surprising and unbelievable for the following reasons.

Apparently, as Vanity Fair revealed earlier today, the actress is set to appear in the upcoming Black Widow, which was going to be her introduction to the MCU… a year ago. She is also supposed to have a bigger role moving forward, but whatever that is, we don’t know yet. Hopefully, she’ll be back next week to provide more answers.

One final point before wrapping up this discussion: Sharon Carter makes a very brief but significant appearance in this episode. In a very short scene, she talks on the phone with Batroc, the Winter Soldier second-level villain who appeared in the first episode of the series, and who is back today to provide the Flag Smashers with the weapons they need. This probably is definitive proof of the theory out there that Sharon is indeed the Power Broker, but whatever her motivations are, we’ll have to wait to see for ourselves next week.

The Falcon and the Winter Soldier has one more episode to go, which will drop next Friday, April 23. Make sure to be back to see our discussion on that.