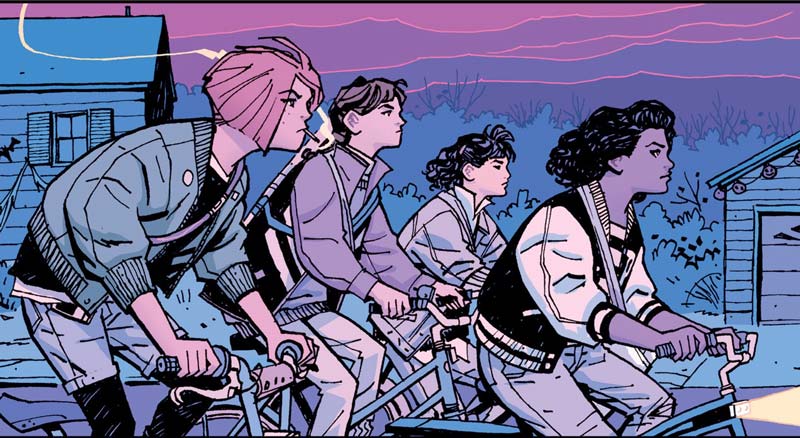 The much-anticipated adaptation of Brian K. Vaughan and Cliff Chiang’s hit graphic novel has been given the go-ahead.

Following a series commitment in 2019, THR is reporting that Amazon is moving forward with a Paper Girls series. The story centers on four girls who get caught in a conflict between time-travelers while delivering newspapers on the day after Halloween in 1988. Amazon Studios and Legendary Television will produce in association with Studio B, with Stephany Folsom (Toy Story 4) and Halt and Catch Fire creators Christopher Cantwell and Christopher C. Rogers serving as co-showrunners.

Folsom, Cantwell, and Rogers said in a joint statement:

“As huge fans of what Brian and Cliff created in Paper Girls, we couldn’t be more excited by the opportunity to bring this incredible adventure to life… This is a story with so much heart, and so many unique colors and dimensions — our sincere hope is not only to do justice to the source material, but to make Paper Girls unlike anything else currently on TV.”

Folsom, Cantwell, Rogers, Vaughan, and Chiang will executive produce the series, which follows Marvel and Hulu’s Runaways and FX’s long-gestating Y: The Last Man as the third TV adaptation for one of Vaughan’s comics.