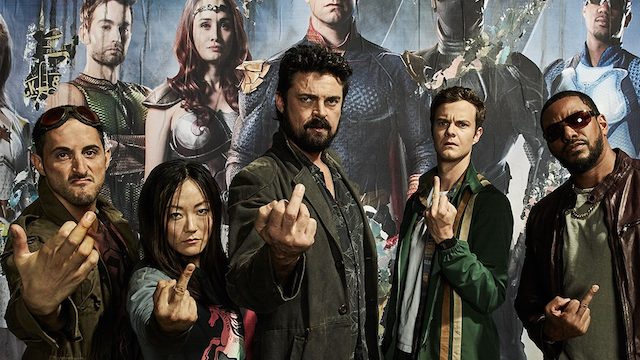 Amazon’s ultraviolent series The Boys is returning soon, but don’t expect a completely binge-friendly format when the twisted take on superheroes debuts its sophomore season this time around.

The Boys, based on a Dynamite Comics comic book series of the same name by Garth Ennis and Darick Robertson, is set in a world where superpowered individuals are celebrities, movie stars, social media influencers, and corporate brands first, and superheroes later – and, quite frankly, most of them are assholes when they aren’t in front of the camera. The so-called superheroes, led by Vought International-sponsored superhero team The Seven (this universe’s version of the Justice League or the Avengers), have made plenty of enemies, and not just traditional supervillain figures. A group of vigilantes called The Boys seek violent justice against The Seven and Vought in an attempt to hold them accountable, gaining some unexpected help from a new recruit to The Seven who realizes that the team isn’t what she hoped it would be.

The series proved to be a solid kick in the pants that the superhero genre needed, serving as an absolutely massive hit for Amazon Prime and ensuring its future. Due to COVID-19 messing with the show’s post-production cycle (filming had wrapped well ahead of the initial set of shutdowns in the United States), it seemed likely that there would be some sort of delay for the post-production process of the series, and there has been – just not a conventional one. Today, Amazon finally made the announcement that the show’s second season is coming on September 4 via their Twitter:

We've heard your fuckin' whining and moaning about "when is Season 2" so here you go. See you on September 4th, mates. #TheBoysAreBack pic.twitter.com/Q6aS2NvKKk

However, there’s a catch. Unlike the rollout plan for the first season, which dropped all eight episodes at once, the second season is taking a slower path similar to the one that Disney has taken with all of their Disney+ originals. The first three episodes will be arriving on September 4, 2020, but all remaining episodes for the season will roll out one at a time for every subsequent Friday. With an eight-episode season, that means that the season ought to end on October 9. The trailer for the new season, along with a new scene and a tie-in promotional clip showing an alternate look at said scene, can be watched below:

What the fuck? The newest member of The Seven just posted this. Any clue what's going on, mates? pic.twitter.com/SppWuhNgiZ

The Boys Season Two will start streaming on September 4, 2020, with episodes airing weekly after that. All episodes of Season One are streaming right now on the service.