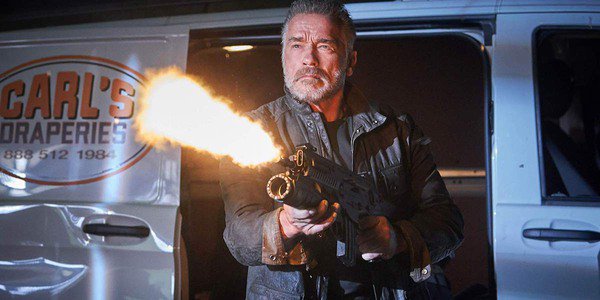 Terminator: Dark Fate has just dropped an official trailer, while James Cameron has lifted the lid on his involvement with the latest entry in the Terminator franchise.

The trailer reveals a bit more of the film’s story. Sarah Connor changed the future so the last three Terminator films never happened, but Judgement Day is still on the horizon. We see Sarah teaming up with Mackenzie Davis’s character Grace to protect a small girl who is presumably the key to winning the war against Skynet. They meet Arnold Schwarzenegger’s Terminator along the way, and it seems Sarah Connor still holds a lot of hostility towards him. The rest of the trailer is peppered with pretty impressive action sequences, and it has to be said that this sequel is looking pretty good right now.

James Cameron has also been speaking to Deadline about what it was like being more involved with this film than the last three. The Terminator franchise has been on a slow decline since Terminator 2 back in 1991, when Cameron stepped away from the director’s chair to helm new projects. Cameron was unable to return as director for this film due to his commitments making the long-gestating Avatar sequels, but is involved as producer and also helped write the script. ‘My role as producer was in pre-production, and prep and shepherding the script. But it was Tim’s film when it reached the floor,’ he was keen to point out. Dark Fate is being directed by Tim Miller, who is perhaps most well known for directing Deadpool back in 2016.

‘I focused on getting the script punched up,’ Cameron explained. ‘I didn’t feel like we went into the shoot with the script exactly where it should have been. There was a lot of momentum on the project, there was a start date, there was a lot of energy and a lot of ‘go fever,’ but the script wasn’t where it needed to be so I quietly worked on it in the background and shipping out pages. Sometimes I was shipping out pages the day before they shot a scene. I’m not sure that was 100% always helpful but overall I kept the characters on track and sounding right and being where they needed to be.

Interestingly, Cameron revealed that he and his team went back and rewatched Terminator 3, Terminator: Salvation and Terminator: Genysis, in order to spot the mistakes those films made. Ideally, with those flaws revealed, they won’t be making the same mistakes with Dark Fate. ‘One of the things that seemed obvious from looking at the films that came along later was that we would need to get everything back to the basics and that we would need to avoid the mistakes of making things overly complex and that we needed to avoid stories that jumps around in time and one that goes backward and forward in time,’ he said. ‘Let’s keep it simple in the relative unity of time. With the story, let’s have the whole thing play out in 36 hours or 48 hours. In the first two movies everything plays out in less than two days in each one so there’s energy and momentum.’

That approach to keeping the timeline simple was something they also decided to do when it came to deciding the film’s premise, as Dark Fate can be considered a direct sequel to Terminator 2. ‘I suppose it is an unusual situation from a high-level perspective since I wasn’t involved in three intervening films, but when I talked to David Ellison about it his vision for this was basically to go back to basics and do a continuation from Terminator 2, which is one of his favorite films,’ Cameron said. ‘He’s always believed in the potential of Terminator but he really felt that his own film, Genysis — and he was quite honest with me about this — fell short of the mark and didn’t really do what he had wanted it to do. So he said, ‘Let’s start with a blank slate and take it back to Terminator 2.’ And that idea was intriguing.’

It was particularly important to Cameron that they bring a strong pitch to Linda Hamilton. Schwarzenegger has been involved in two of the last three Terminator films, but this is the first time Hamilton has returned to the franchise. ‘We spent several weeks breaking story and figuring out what type of story we wanted to tell so we would have something to pitch Linda,’ Cameron began, explaining that if the film did well, they had strong ideas for a new trilogy that she would presumably star in. ‘We rolled up our sleeves and started to break out the story and when we got a handle on something we looked at it as a three-film arc, so there is a greater story there to be told. If we get fortunate enough to make some money with Dark Fate we know exactly where we can go with the subsequent films.’

Cameron also revealed that there was a big discussion behind the scenes with Paramount as to whether the film should be R-rated or PG-13, like the previous three Terminator films. Cameron’s original films were R-rated, but with the dismal reception of the PG-13 films, there was a discussion of whether to ramp up the violence and swearing for this one. Ultimately, it meant they filmed scenes for both options.

‘Science fiction filmmaking has been compromised over the past couple of decades,’ Cameron said. ‘That compromise is trying to pander to a larger audience and making these big expensive movies and then following the common wisdom that, well, once you’re making one of those movies the reflex is it must be PG-13 and the thinking is if it’s not then you’ll cut out 25%-30% of your potential earning power. And on a big film that’s your margin, that can be the difference between profitability or losing money.’

It’s a discussion that is often had with any genre movie not made by Disney, who have very clear rules on what content can and can’t be in their films. But hopefully they made the best decision, and James Cameron can help Terminator: Dark Fate be the best film in the franchise since his last one, 28 years ago.