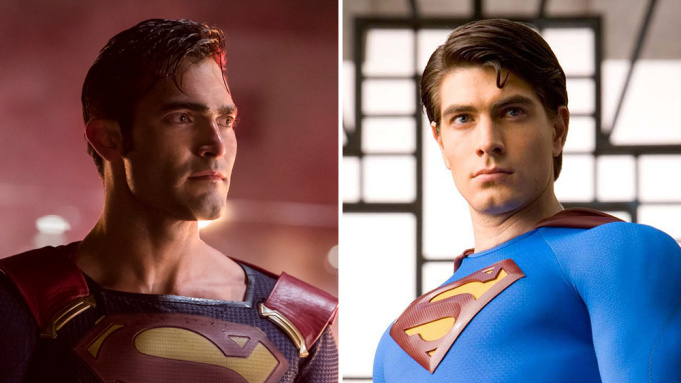 Superman returns. This year’s Arrowverse cross over event is the biggest in DC history; Crisis on Infinite Earths. And it’s a job for Superman. But for an event like Crisis, one Superman isn’t enough. That’s why we’re getting two! Yes, Tyler Hoechlin and Brandon Routh will both be suiting up as the world’s greatest hero to save the multiverse!

Legends of Tomorrow may be sitting out tomorrow’s Arrowverse take over of Ballroom 20, the series isn’t due to return until after the mid-season break for it’s fifth season, but that didn’t stop series star Brandon Routh from being at the center of today’s super sized bombshell as Deadline revealed that the Superman Returns star, who plays Ray Palmer (Atom) on the show, will once again be donning the famous blue suit and red cape, returning to the role that first thrust him into the super hero spotlight.

According to Deadline the news is expected to be officially revealed at Comic Con this weekend, but in less than an hour both Routh and Hoechlin had taken to Twitter to confirm the news;

Ohhhhhh boy! Things are about to get interesting…
Can’t wait to see what’s in store. Crossover season is rapidly becoming one of my favorite seasons of the year! Enjoy the opportunity more and more each time.
It’s good to be back team! Good to be back…#Crossover#Superman https://t.co/FDcgSFhogm

Hoechlin’s return had largely been expected following his appearance in last year’s Elseworlds crossover, which saw him leave Earth-38 for Argo City with Lois so that she could safely give birth to their child. Routh’s return to the cape comes as much more of a surprise, albeit a very, very welcome one.

According to Deadline the two actors will portray Superman “in different time frames”, but given the nature of Crisis on Infinite Earths, along with the similar ages of Routh and Hoechlin, and the stars saying they are excited to share the screen as Superman on social media, I’m more inclined to believe they are the Supermen of different worlds. With Hoechlin once again portraying the Superman of Earth-38 whilst Routh once again revives the classic Superman of the Donner universe.

I have to admit, just the thought of the Arrowverse potentially linking up with the Donnerverse fills me with a joy that I wasn’t expecting. I’m certainly not expecting them to address any plot elements left open by Superman Returns (namely Jason White), but just the possibility of seeing that Superman again, accompanied by John Williams’ iconic march, is more than I ever expected Crisis to actually deliver in terms of crossing over into the movie universes.

Speaking with Entertainment Weekly after the news broke, Routh said “I’m very excited. It’s an opportunity for me to kind of say hello and goodbye to the character in a way I didn’t get to the first time … I’m just very honoured to be able to do this one last time.”

Crisis on Infinite Earths will air in 2019 and 2020, with three episodes taking place before the winter break and the remaining two parts airing when the Arrowverse, and Legends of Tomorrow, returns in 2020.