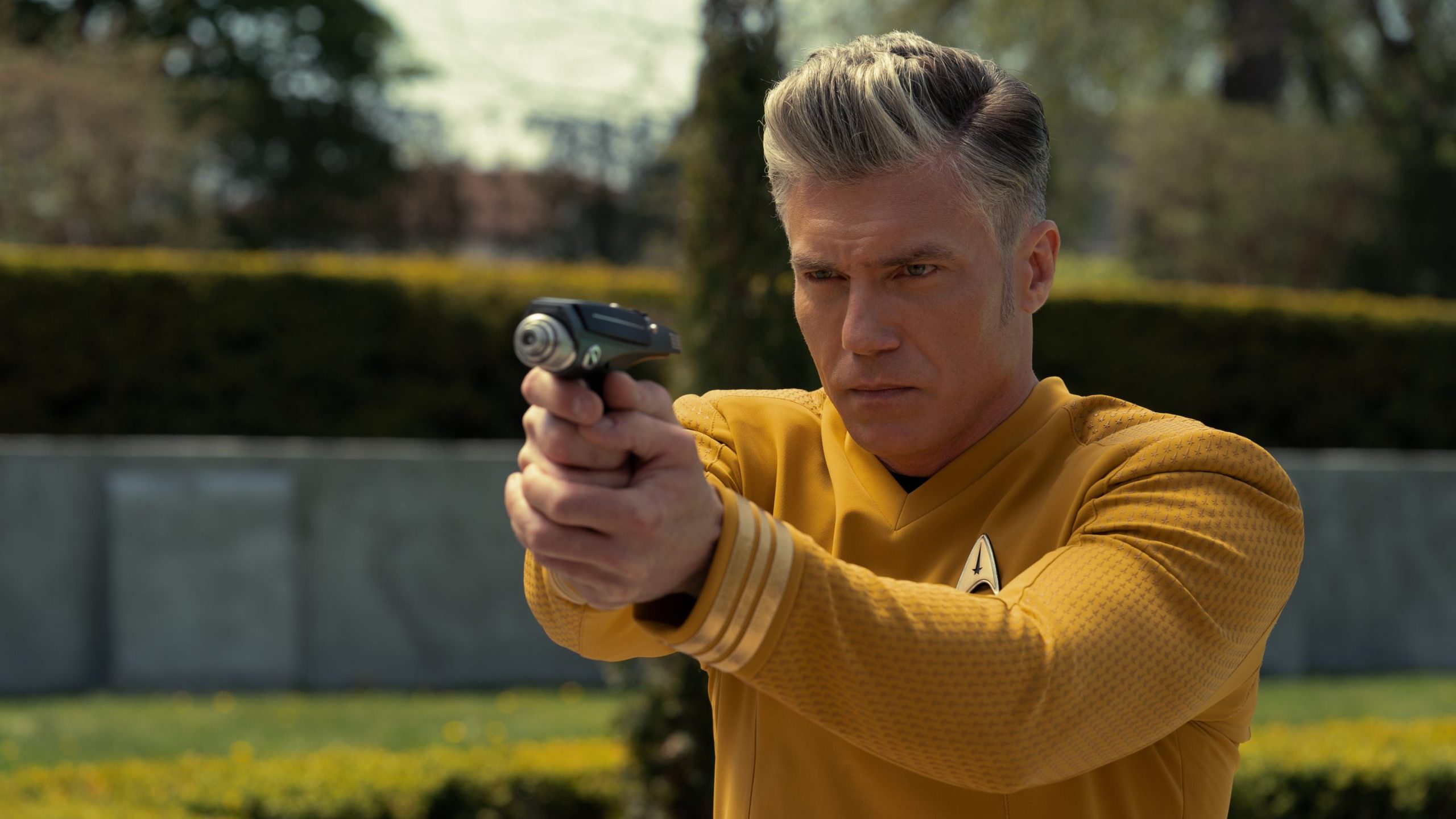 Star Trek: Strange New Worlds leaves me in a different emotional state every Thursday. Before this week, the previous five episodes have resulted in some mostly positive resolutions. In Episode 6: Lift Us Where Suffering Cannot Reach, I was left with my mouth agape and a nauseous feeling in the pit of my stomach.

Another wonderfully written episode results in the most uncomfortable story in the series this far. The episodic structure of the show allows for every week to present something fascinating and new. While for some shows this would reduce the growth and development of its characters, Star Trek: Strange New Worlds uses it to its advantage. Each week, you feel as if you are growing with these characters through deeply nuanced episodes. The stellar cast delivers another special one this week as we have our first Captain Pike (Anson Mount) centric episode since the series premiere, with romance in the air and mystery afoot.

Anson Mount delivers the goods in this one, and in more ways than one. We pick up with the Enterprise on a simple cartography mission in the Majalan system when a transport ship under fire sends a distress call to the flagship of Starfleet. Cadet Uhura (Celia Rose-Gooding), currently undergoing security training with Lt. Noonien-Singh (Christina Chong), misfires on the enemy vessel rendering it useless rather than simply disabling it. Uhura’s bubbly and eager personality mixed with La’an’s uber seriousness and, at times, dry sense of humor perfectly complement the other plot dynamics at play.

Having been saved, the crew of the transport vessel beams aboard the Enterprise. From the moment the patterns materialized in the buffer in front of Pike you knew the temp was about to crank up. Pike comes face to face with a Majalan he once rescued, Alora (Lindy Booth), whom Pike is pretty smitten with given how he acts like a little school boy when they first interact. She is accompanied by a young boy, the First Servant (Ian Ho), who is about to undertake a sacred ritual to ensure a peaceful transition of power to Majalis, and Elder Gamal (Muse Madhavji), the boy’s father. I’m not sure any of the cultural explanations stuck with Pike however, as he clearly has a case of the crazies for one Miss Alora. 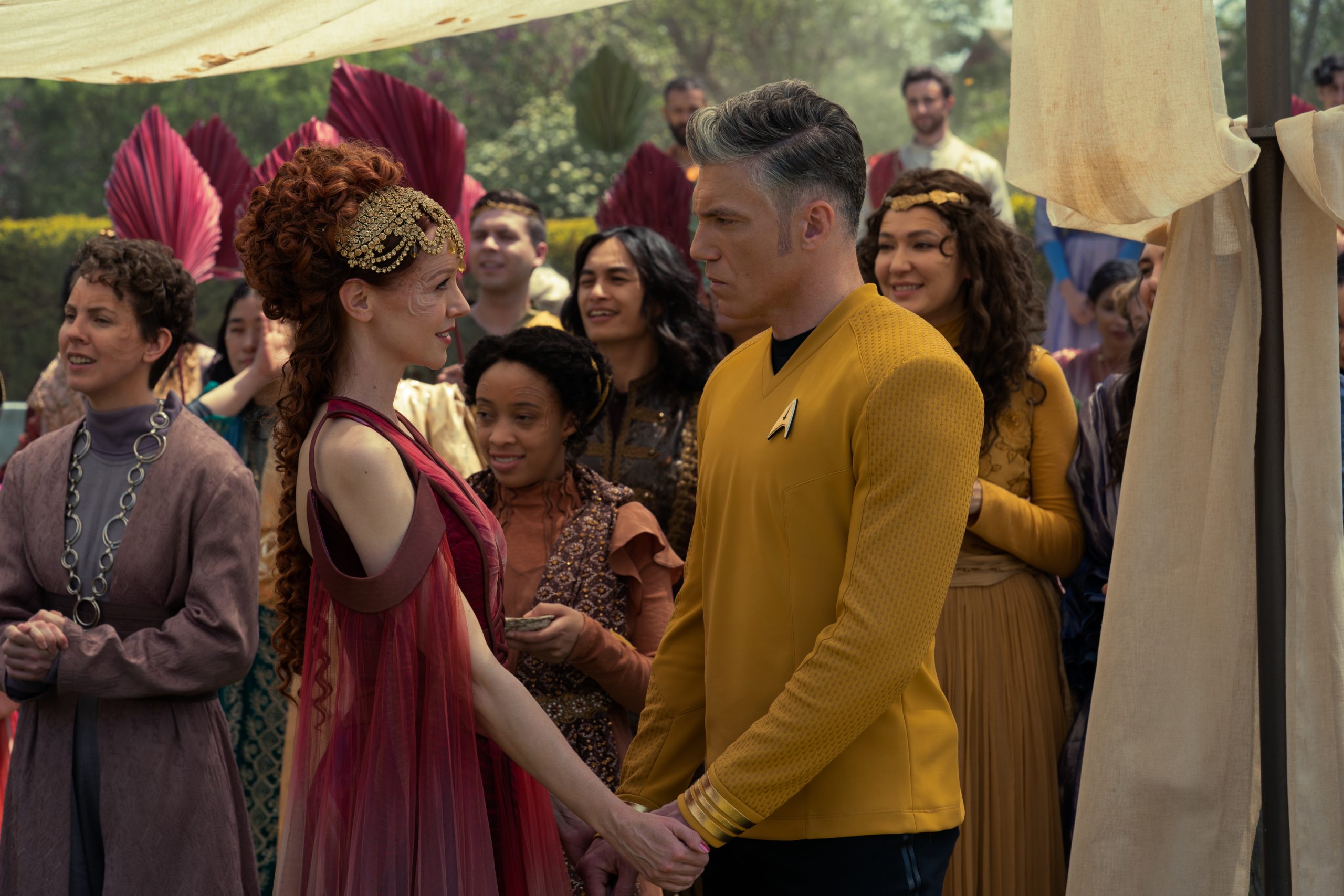 Lindy Booth as Alora and Anson Mount as Pike

As those two reconnect, the First Servant and Elder are in sickbay to make sure the young child is healthy and ready for the Ascension ritual that is to come. This is where Dr. M’Benga (Babs Olusanmokun) and Nurse Chapel (Jess Bush) realize how brilliant this young child is and how incredibly advanced Majalan medical technology is. One can feel the desperation and see the glimmer of hope in M’Benga at this revelation. A few episodes back, we learned of his daughter’s terminal illness and how he is forced to keep her in the transporter buffer until he discovers a cure. We were blessed to see little Rukiya a few times this week, both in a scene with her father reading to her and in another one where she’s playing with the First Servant. She is one cute kid.

On Majalis, things quickly heat up between Pike and Alora. The two finally get together around the mid-way point of the episode. It was obvious from the episode’s beginning this was going to happen. The events on the planet certainly expedited matters as one of the First Servants’ sworn guards was discovered to have been on the attacking ship. Pike offered up a security detachment to remain, but Alora offered up the option for a more personal deployment. The two of them share a long awaited night together, and Pike confides his traumatizing secret to her.

Fans of Star Trek: Strange New Worlds know all about Pike’s struggle with his own mortality. The discovery of how and when his life ends is something he carries with him each episode. The man he chooses to be in spite of that knowledge is a driving theme of the show. So it’s no small thing when he openly shares this with Alora. This is someone he feels as if he has an authentic and genuine bond and understanding with. It makes her impending revelations all the more devastating.

While the attackers of Alora’s ship beamed away before their ship crashed, there was still much to be gleaned from its wreckage. Spock (Ethan Peck) discovers a neural damping device of some kind presumably designed to harm the First Servant. La’an uncovers some data chips she passed over to Uhura to translate. This is where things get messy. It’s discovered the occupants of the enemy vessel were not aliens, but Majalans. To make matters seemingly worse, the First Servant’s Father, Elder Gamal, was in league with the attackers. 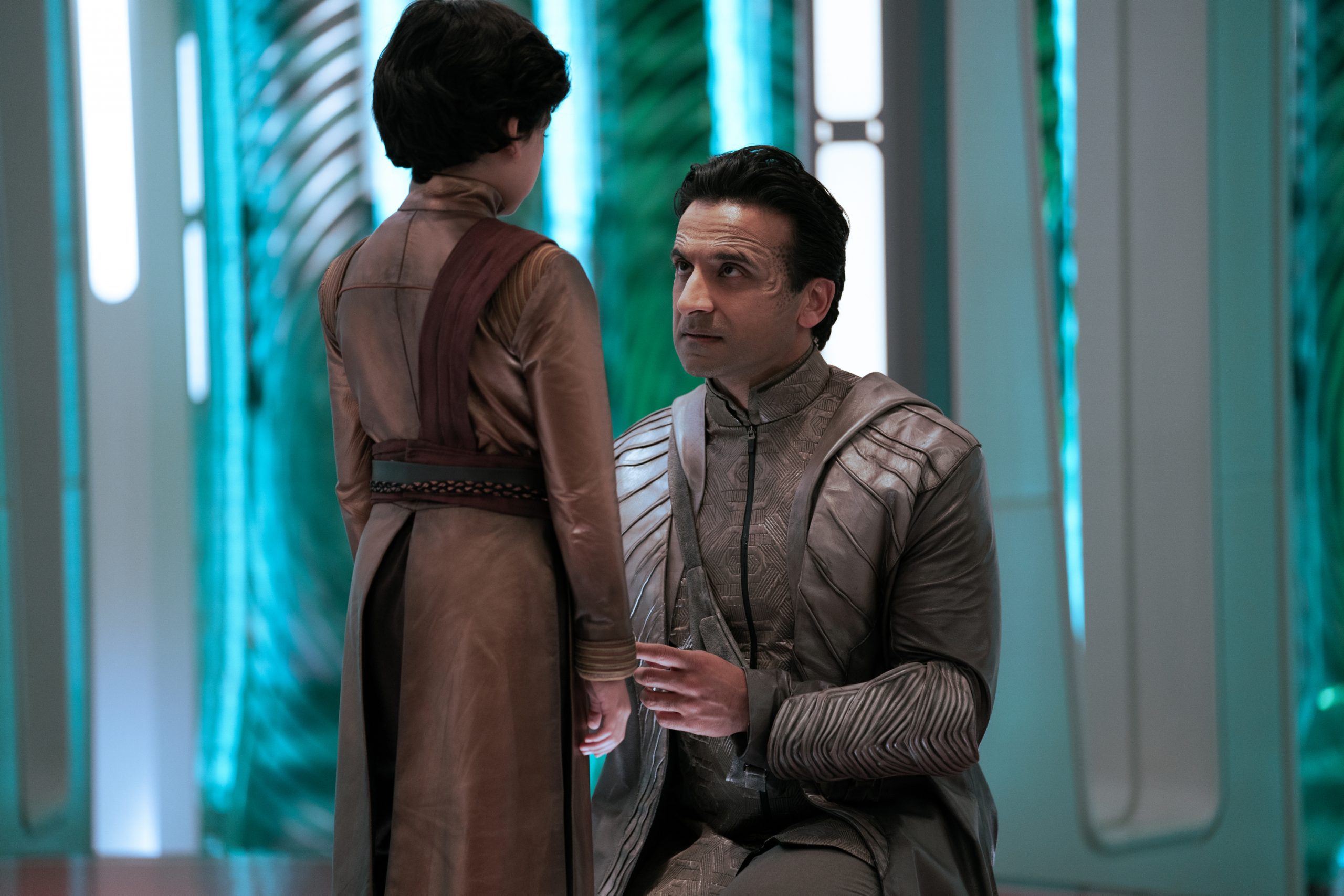 Having uncovered the plot, Captain Pike is invited down by Alora to observe the Ascension ceremony, a sacred ritual where the entire planet comes to celebrate the child selected as First Servant. It is a great honor for Pike to be there as no outsider has ever witnessed the ritual firsthand. Still confused about why one lone child is so crucial to the survival of an entire species, Pike is eager to see the ritual for himself. The horror that follows will stick with Pike the rest of his life.

On the Enterprise, Number One (Rebecca Romijin) has discovered the complete truth after a conversation with Elder Gamel, and it is a horrific one. Desperately trying to get a hold of Pike on the surface, they are running out of time. Electromagnetic interference is interfering with communications and transporters. They have no way to get to him in time to tell him the truth.

The truth is revealed to Pike in harrowing fashion. The Majalans are a vastly technologically advanced species who live in a virtual paradise free from disease, strife and worry. It comes at an inexplicable cost. The First Servant is nothing more than a sacrificial lamb. There is a reason the First Servant is not only just a child, but the brightest and most brilliant child among them. In the depths of Majalis, the First Servant is plugged into a machine that feeds off their neural pathways in an effort to sustain the planet. Their lives are that of unending pain and suffering while the world above lives in peace and harmony because of their sacrifice. As the body of the previous child is dragged away Pike tries a desperate last maneuver to save the newest one. Ultimately, he fails, and the gravity of his sorrow is felt through your TV screen. 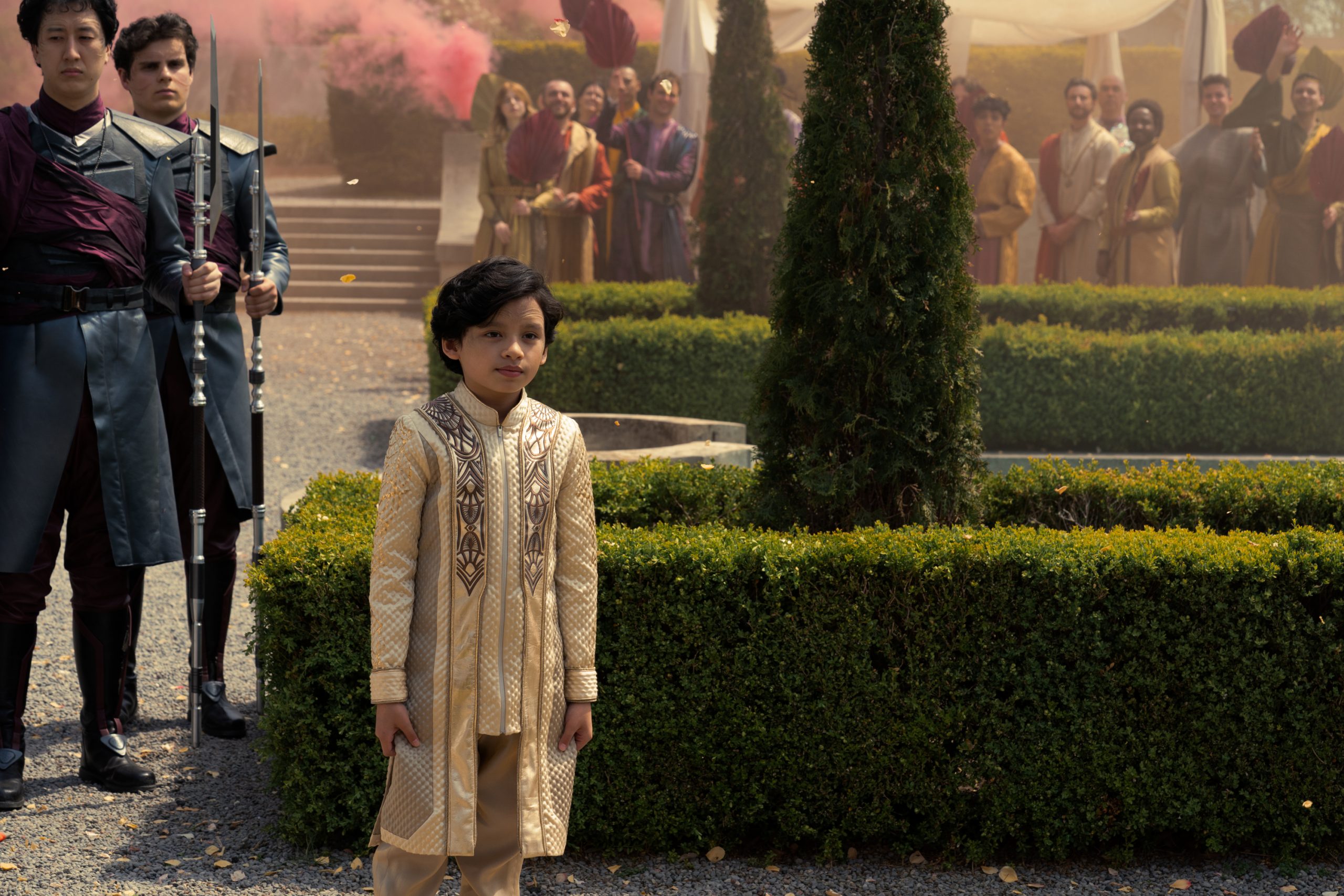 Ian Ho as the First Servant

A devastated Elder Gamal is left mourning the loss of his child. His actions with the attackers were taken only out of a desperate move to save him.  As he mourns the life of his own child there is some hope to be found. Gamal approaches M’Benga about looking at his daughter’s medical file. The hope is that the first steps towards a cure can be found. The emotions on the face of M’Benga are a true testament to Olusanmokun’s acting chops.

With his relationship with Alora severed, Pike is forced to move on with the knowledge of his own failure washing over him like a monsoon. With the knowledge of his impending personal doom each failure has to weigh even heavier on the dignified captain. Every day is a little more important than the last. Each failure is a little more difficult to bear, and each victory is more crucial. It’s a driving force of the show, and its full burden is brought to bear in this episode.

Up to this point each episode had ended in a relatively happy ending. The stark difference from this week’s ending from last week’s is a major turnaround. Not every episode of Star Trek: Strange New Worlds can end happily. There are going to be failures along the way. Failures that shape our crew for the missions to come. This was one of those failures, and it will most certainly impact the choices they make moving forward.