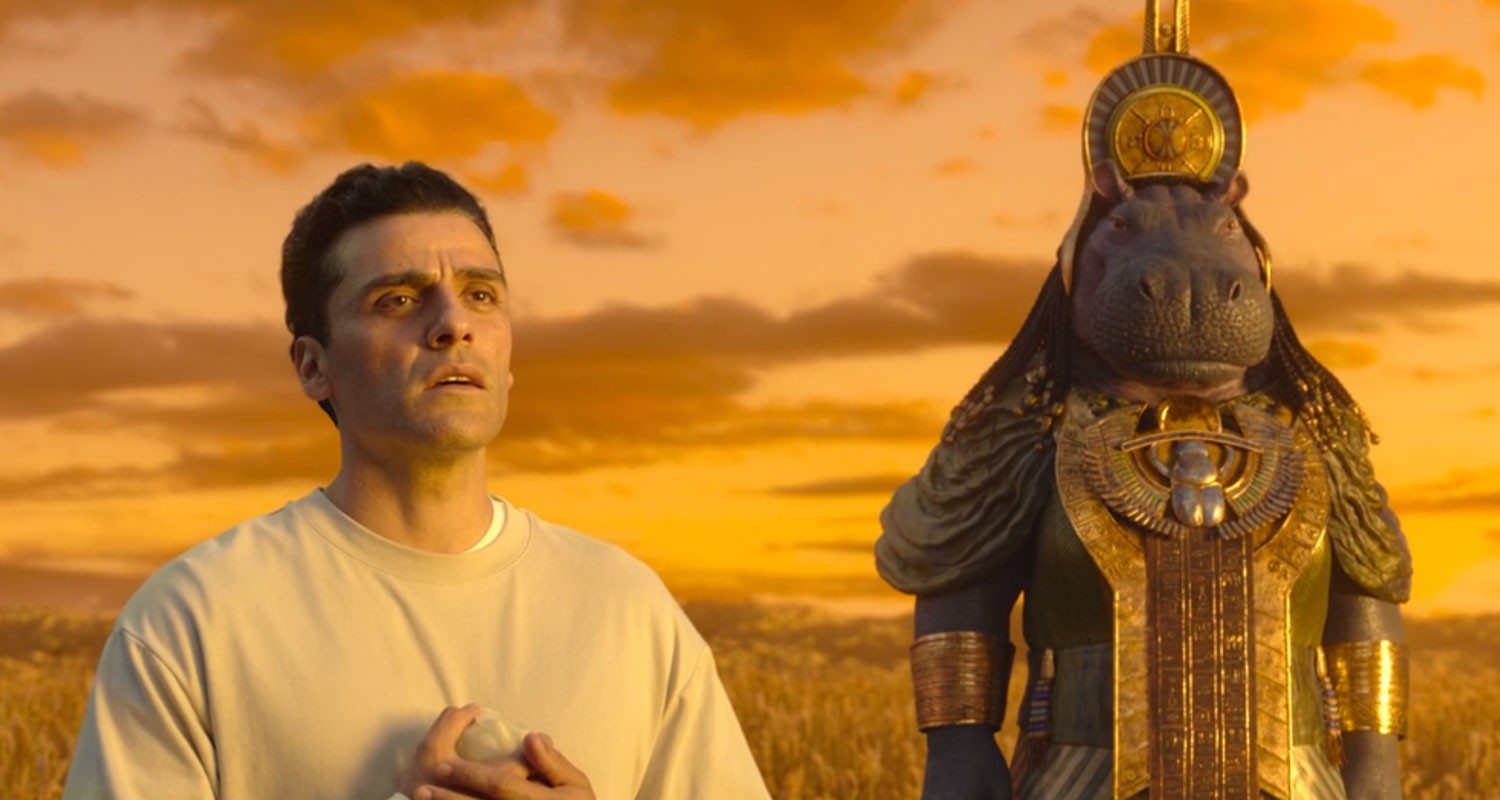 Marvel’s Disney+ series finales tend to get a mixed reception from both fans and critics, but with Moon Knight they’ve managed to stick the landing. Gods and Monsters is a well-paced thrill ride with big stakes, well-choreographed action, and mysteries answered.

I’ve said before that I hadn’t been sure exactly what to think of Moon Knight, as the season finale would inform my opinion of the previous four or five episodes in hindsight. Thankfully, I was right. I look back fondly at those early episodes now as early puzzle pieces of the whole series.

The season finale brings the conflict between Marc/Steven and Arthur Harrow full circle, goes to some exciting places with Layla, and answers one of my biggest questions during the entire season. It also leaves things open enough for Moon Knight to return for a second season, and despite Marvel’s insistence that this is a limited series, I fully expect them to move forward with another installment.

One of the fun things about Moon Knight is that we get to view the events of the series through different perspectives. Usually, it’s been through Steven or Marc, but the first few minutes of this episode let us see what was happening in the real world through Layla’s eyes. We know she can handle herself, but it was still tense watching her evade Harrow’s attention after Marc/Steven’s murder.

Seeing her interact with Taweret while the goddess possessed corpses was darkly amusing, although a part of me thinks it convenient that Layla acknowledged Taweret’s presence so quickly. I guess at this point Layla knows that gods exist, so it’s not too much of a surprise, but I felt she took Taweret’s communication in her stride a little too quickly, as if the episode’s pacing demanded it.

Still, it was all for the better because it meant Layla had a much bigger role in the finale. Instead of trying to stab Harrow, which clearly wouldn’t have worked, Taweret told Layla to free Khonshu so he could stop Ammit. It was great to see her turn down Khonshu’s request to become his avatar before accepting Taweret’s much friendlier proposal to temporarily become her avatar. While that scene was funny and May Calamawy’s performance was great as she played both Layla and Taweret possessing her, the exchange threatened to halt the momentum. I was glad it ended when it did. 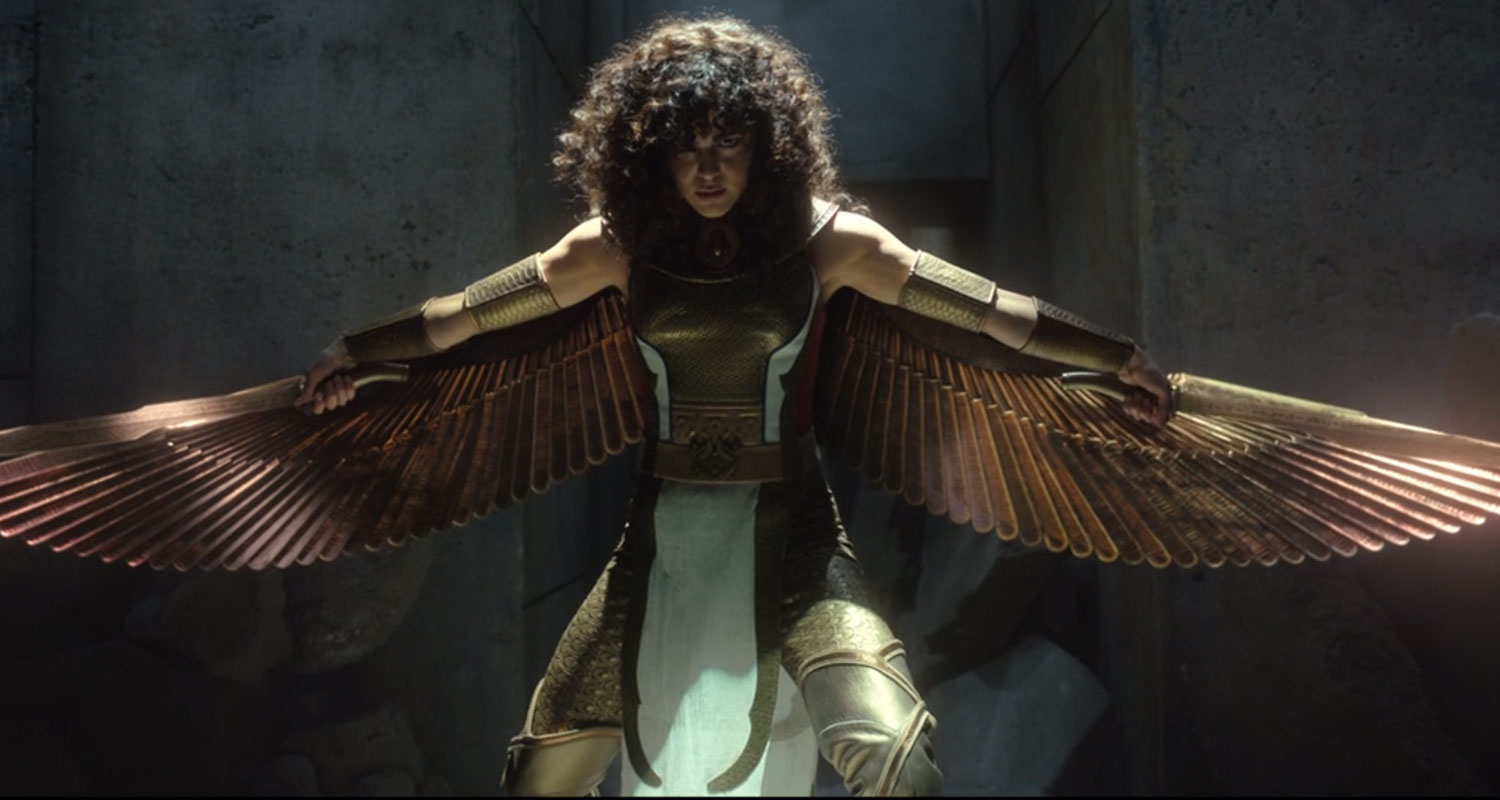 Taweret wasn’t wrong when she said she had a fabulous costume, by the way. I’m not sure if Layla’s superhero costume is based on anyone in particular from the comics (a quick check found nothing of note about Taweret or her avatar), but the outfit and the metal wings looked badass. Layla seemed to enjoy it too; while I found it incredibly on the nose when a civilian asked if she was an Egyptian superhero, you could tell she took delight in answering “yes”. It makes me wonder if she’ll continue as Taweret’s avatar a little while longer, considering the hippo goddess seems much less manipulative than Khonshu.

Meanwhile, Marc’s love for Steven had grown so strong that he spent barely a minute in the Field of Reeds before deciding to go back and rescue him from the Duat. I have very little idea of how this actually worked. It looked to be a terrible idea that would consign both of them to the Realm of the Dead… until Marc’s sacrifice seemed to fully heal their heart or something and the gate behind them opened and let them both walk back into the world of the living, where they returned to Marc’s body.

It was very satisfying seeing Marc and Steven work together as a team after all their bickering in the previous episodes. I particularly enjoyed Steven’s newfound confidence negotiating with Khonshu as they made him agree to release them from his service once Ammit had been stopped. If that wasn’t enough, you can imagine my glee seeing Steven’s new fighting skills in the final act! 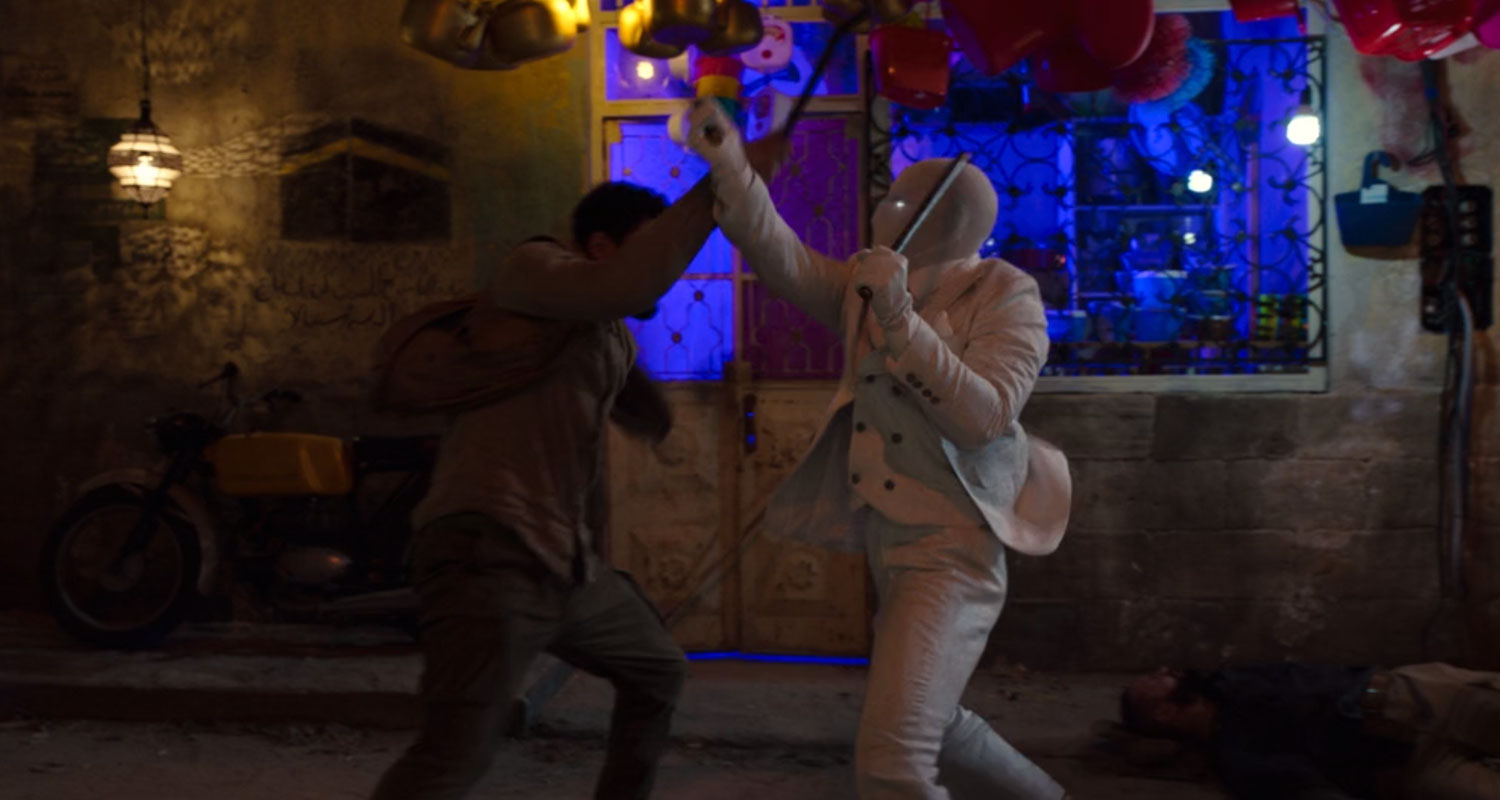 Once Marc and Steven suited up as Moon Knight/Mr. Knight, the action ratcheted up. I was disappointed at first that the fight between Khonshu and Ammit in the temple seemed to end so quickly (the CGI was extremely well done), so I was delighted to see them fighting above Cairo, kaiju-style. It made the conflict much grander in scope, appropriate for a clash between gods.

The choreography for Marc and Steven’s fights against Harrow and his goons was excellent too; not quite as brutal as Daredevil, but not far off either. I’d been waiting for Moon Knight to return since episode 3, and it was worth the wait. Seeing Mr. Knight knock lumps out of people was incredibly entertaining as well, a fantastic payoff for Steven’s arc over the course of the series.

After Marc/Steven and Layla finally managed to imprison Ammit in Harrow’s body, I never really truly believed that Marc would kill Harrow. Moon Knight may be darker than your average Marvel superhero story, but it is very rare to see a Marvel hero kill someone in cold blood, and they certainly weren’t going to do it here, in the hero’s defining moment. Marc seemed almost reluctant to do it, and as soon as Layla gave him a reason not to, he immediately backed down. It was a nice way for him to defy Khonshu one more time and stand up for himself. 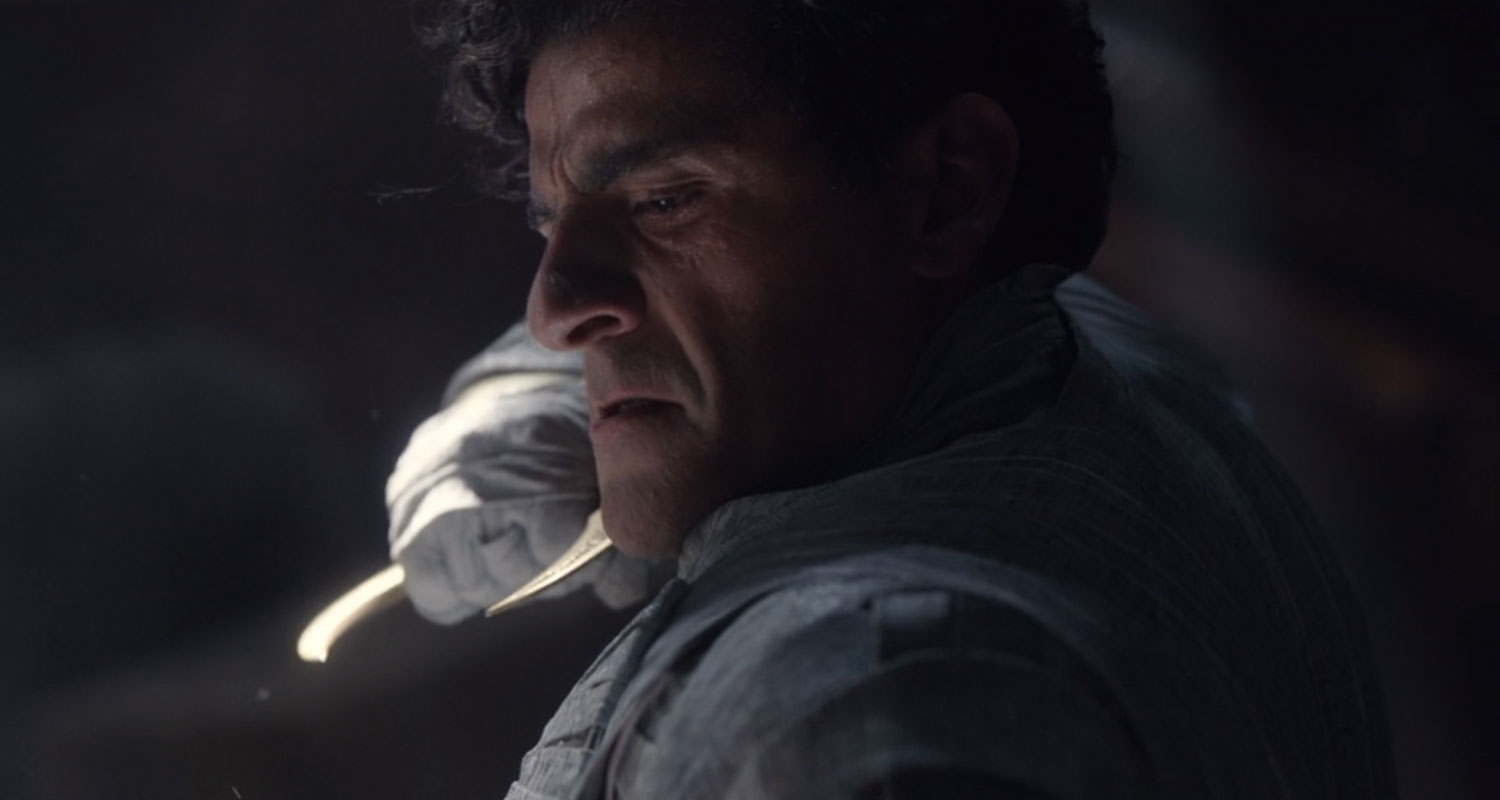 Then, the episode appears to just end. Marc is seemingly released from servitude, and he and Steven wake up in their London apartment, and that’s it. Thank goodness this wasn’t actually the end of the series, because it would have been maddening not knowing what happened to them beyond that, let alone not knowing what they did with Harrow and Ammit. It might have been nice to have an extra scene where Harrow is dropped off at the mental hospital so the ending didn’t feel so random.

Thankfully, the post-credits scene serves as the series’ true ending. We see Arthur Harrow in the mental hospital, having apparently gone crazy with an Egyptian god living inside his head, before being picked up by a mysterious figure. It’s easy enough to spot that this is Oscar Isaac, and as soon as we saw the white limo outside, those familiar with the comics knew we were finally getting an answer to one of the series’ final remaining mysteries: the third personality! 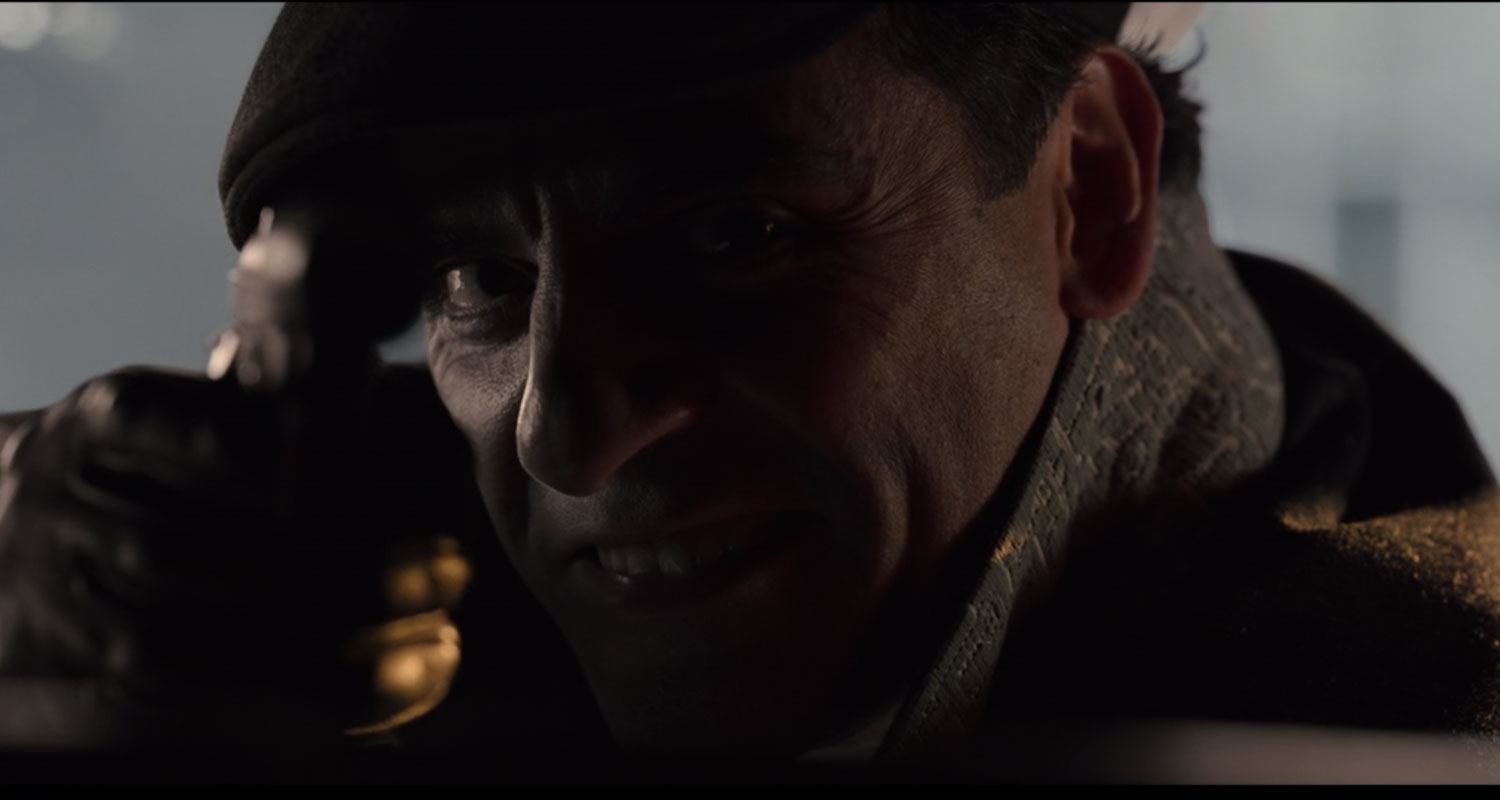 We’d gotten yet another hint of the personality in the fight with Harrow, as Marc/Steven blacks out only to find Harrow unconscious and all his goons dead or incapacitated. Layla is a little bit frightened by what just happened, which told us that this third personality must be particularly malicious. It was great to finally get confirmation on this at the very end. Not only did we learn of his existence in the limo with Khonshu, we also learned his name: Jake Lockley.

Lockley is one of Marc’s personalities from the comics, and the show kept his background as a driver, but as far as I’m aware, it seems they made him a lot darker than in the source material. We find out that he is happy to keep serving Khonshu without Marc and Steven’s knowledge, and has no qualms about killing people.

I got tingles watching him smile as he shot Harrow, with Sinatra’s ‘My Way of Life’ playing in the background. What a sinister way to end the series, with the lyrics suggesting that killing and serving Khonshu is part of Marc at this point. It plays into Marc’s fear that he’s nothing more than a killer, a fear which he’d conquered in Asylum. It’ll be interesting to see how he reckons with that side of himself once he discovers Lockley’s existence.

We’ll absolutely see Lockley and Moon Knight return. I have no idea when or how that will happen, but I can’t wait to learn more about him and to see Marc, Steven, and Layla again. Considering the character’s successful debut, I’m sure it will happen in the near future.