Episode two of Loki picks up shortly after the last one left off, with the god of mischief set to help the TVA track down his variant. It gives us a lot of buddy cop comedy moments between Loki and Mobius, and a thrillingly unpredictable final act.

Those who didn’t enjoy the somewhat chaotic pacing of Glorious Purpose can rest easy knowing this instalment is structured much like a standard cop show; the criminal commits a crime at the beginning, the two detectives follow the clues to find them, and it builds to a dramatic showdown at the end.

Like any good cop show though, Loki also sets aside time to explore our protagonist and his partner (or supervisor/parole officer?) during the downtime. The show once again gives us glimpses of how Loki really feels underneath all his arrogant bravado, while also showing us what makes Mobius tick.

It’s an absolute joy watching Tom Hiddleston play this character, who chafes at the idea that the TVA doesn’t consider him all that dangerous, while Owen Wilson excels as the charming Agent Mobius. It builds to an exciting crescendo, leaving us on a fascinating cliffhanger.

While the show’s structure is certainly easy to follow, the rules concerning time travel are a lot harder to wrap your head around. Early in the episode, Loki and Mobius run through some of the new elements concerning how nexus events work.

I barely understood what they were talking about until later in the episode, but I think the gist of it is this: whenever someone makes a decision that branches from the Sacred Timeline, they become a time variant, and this creates a nexus event, which in itself is unpredictable and ever-changing, so the TVA have to show up and catch the variant before destroying all remnants of the nexus event with a reset charge before they leave — so it doesn’t create a separate multiverse.

It’s exhausting to try and wrap your head around, but thankfully Loki at least sheds a bit of light on it by pointing out that his training material is full of TVA propaganda. This is one of many clues the show seems to be dropping that suggest the Time Keepers are not what they seem. Loki once again calls them “space lizards”, intending to poke fun at Mobius’ beliefs, but it does suggest that the TVA is a kind of cult, headed up by these supreme otherworldly beings that supposedly have a grand plan for all of time.

The show seems to already be placing clues that the Time Keepers’ grand plans may not be all that they’re cracked up to be. Judge Renslayer’s assertion that they still don’t know how the Sacred Timeline ends seems odd, claiming they are still working it out. As Mobius has repeatedly reminded us, time moves differently in the TVA, but it seems odd that the Time Keepers still haven’t sorted everything out. If the TVA is as ancient an organisation as it suggests it is, wouldn’t this have already been sorted?

Also, when Loki and Mobius travel to Pompeii, the former does a bunch of things he shouldn’t, announcing to everyone that he’s from the future and that they’re all going to die. Mobius is terrified that they’re about to create a nexus event, only to find out that there is zero variance energy. It’s a huge clue that helps them find the Loki variant, but it seems to fly in the face of everything Mobius and the TVA believe is true about nexus events. It might be nothing, but these inconsistencies suggest that not everything is as it seems.

The Variant spends a lot of time questioning Loki’s true motives. These are valid questions, as Loki is the god of mischief and has “literally stabbed people in the back 50 times” according to Mobius. As such, Loki’s goal becomes proving himself trustworthy to the TVA, one that he definitely doesn’t achieve in this episode. When they visit the Rennaissance fair in Wisconsin, 1985, to investigate the variant’s activity, Loki immediately tries to trick and charm the TVA agents. However, Mobius is expecting the deception, and it only succeeds in getting the TVA to distrust him even further.

We only get one small glimpse at Loki’s true self, when he reads the file on Ragnarok and tears up at the realisation that his home and people will be destroyed. It’s an important moment that helps us pinpoint the things that Loki does care about, and gets us a little closer to understanding the person he actually is. That he shrugs off this revelation when talking to Mobius moments later is merely an attempt to build a wall around himself, so no one knows what the god of mischief is truly thinking. 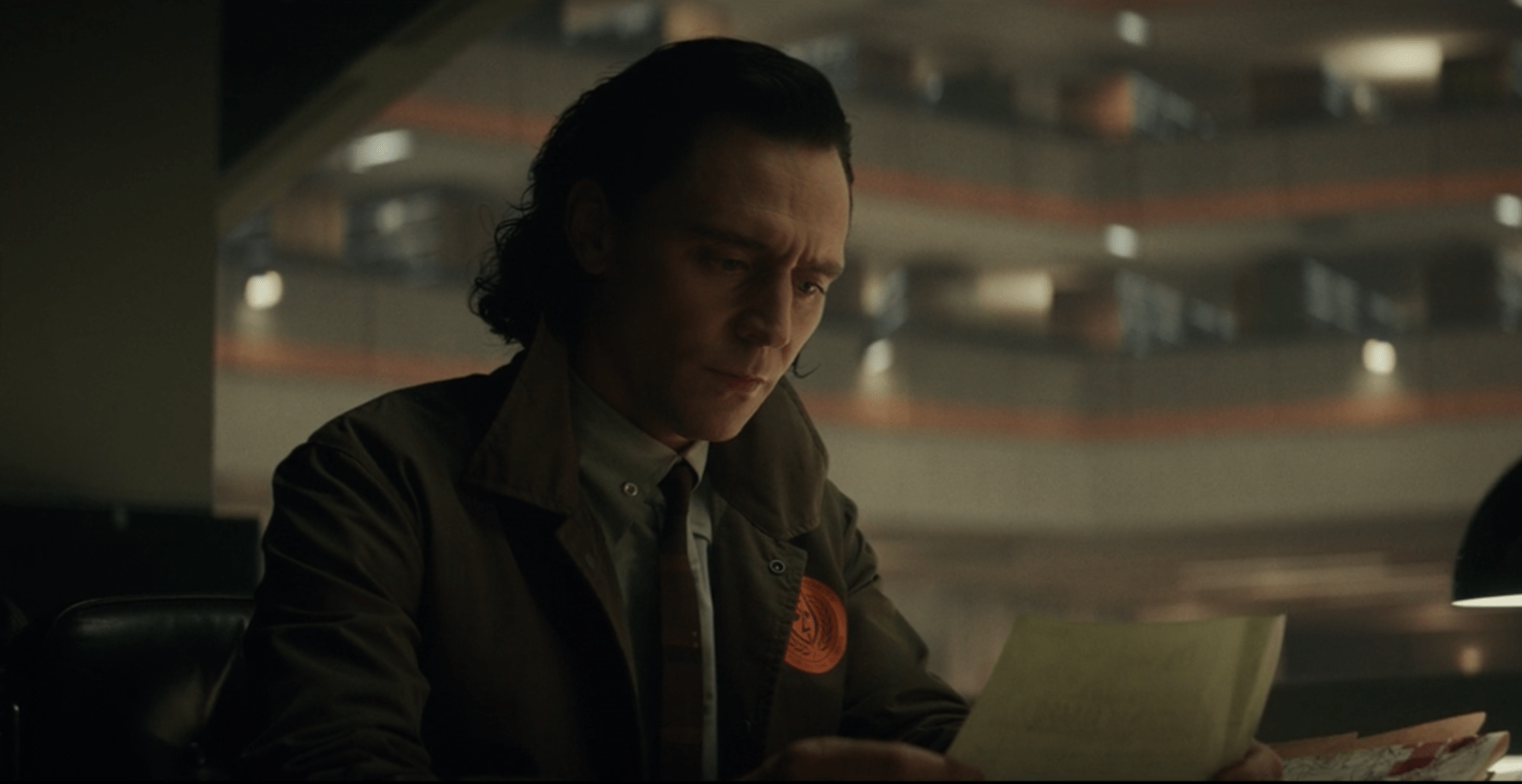 The relationship between Loki and Mobius is interesting, as we can’t say with exact certainty that we truly know what the other is really thinking. Loki himself claims to want to catch his variant, and is given a big incentive to do that by Mobius, who teases that he might get an audience with the Time Keepers as a reward. This in itself seems increasingly unlikely when Mobius later admits that he’s never even met them himself, and Judge Renslayer only offers vague answers when Mobius asks her about them. If they haven’t met them, what chance does Loki have?

However, Loki later states that his goal is to take over the TVA. Likewise, Mobius defends Loki from his colleagues Judge Renslayer and Hunter B-15 to the point where you think he really believes in him, only to berate the Asgardian shortly after, claiming that, at best, he either pities or is just using him to catch the other variant.

The likely answer is somewhere in between, but both partners are clearly lying to each other about their true feelings and motivations. That said, Mobius’ impassioned monologue about jet skis’ perfect marriage of form and function gives us a fun look into what makes him tick. 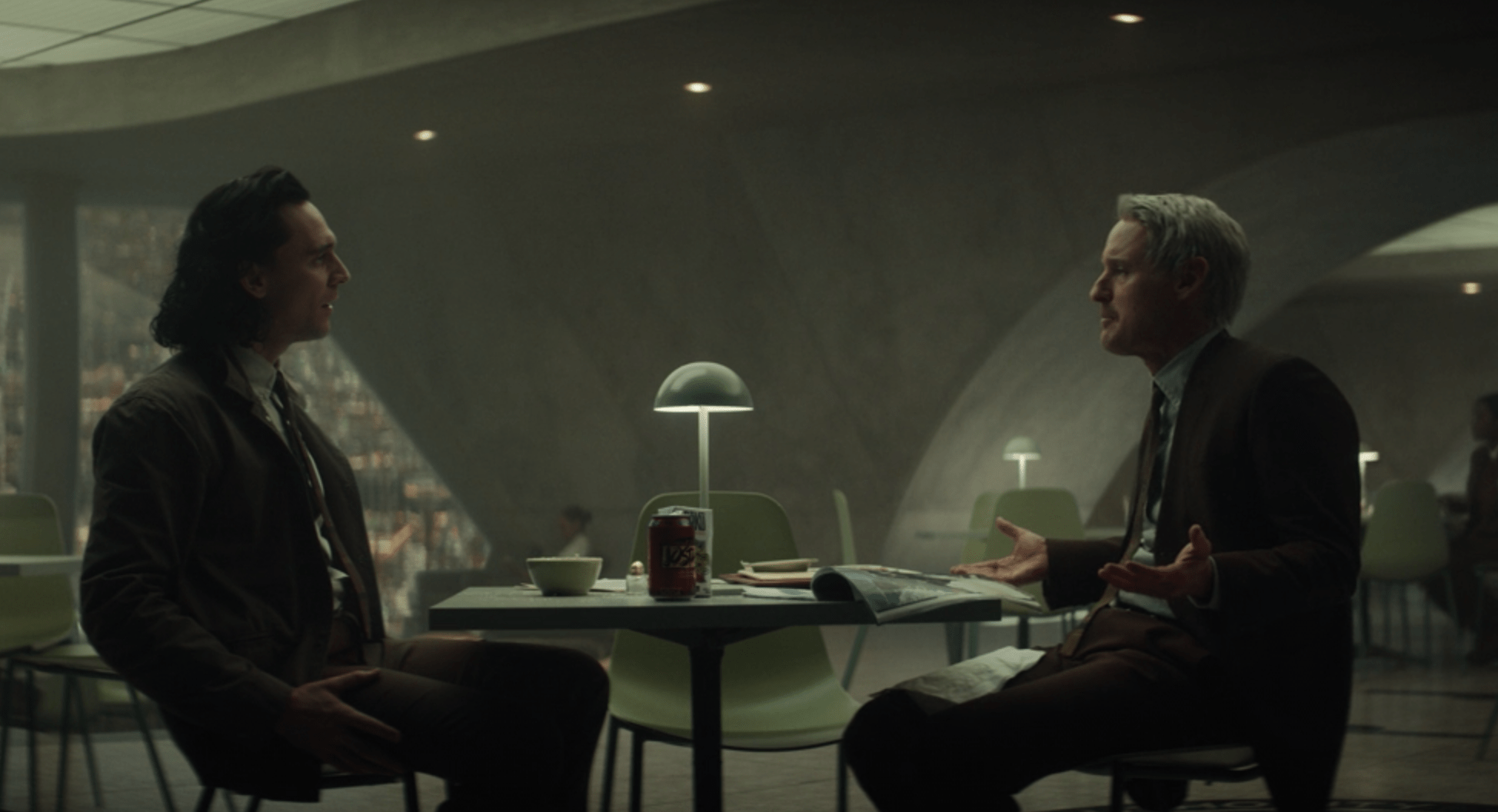 Their partnership does allow for some great “buddy cop” moments, with Loki playing the “loose cannon” and Mobius the “straight shooter”. Loki’s salad metaphor is hilarious, as he ruins his partner’s lunch by filling the salad bowl with salt, pepper, and milk while making a point about time travel.

Playing the “loose cannon” also allows for more hilarity as Loki repeatedly feigns innocence while blatantly lying to Mobius — the “Well, I’d never do it again” line shown in the trailers is still every bit as funny as Loki clearly lies to Mobius that he’d never betray him. His delight in causing mischief at Pompeii is great as he revels in the chaos caused by the volcanic eruption — this is the god of mischief in his element.

The Variant‘s final act takes place at a Roxxcart superstore — presumably part of the Roxxon Corporation briefly seen in Ant-Man, Agent Carter, and Daredevil — in Alabama, 2050. It’s here where the episode truly shines.

The variant is waiting for them, activating a timer on several reset charges throughout the store, turning them a different color so we know that they’re being used for a nefarious purpose. The decision to split up Loki and Mobius seemed an interesting one, since their relationship seemed to be the crux of the episode, but at the very least it seemed we were going to get some interaction between Loki and Hunter B-15, perhaps digging a little more into her character.

However, instead it was a setup for our first meeting with the Loki variant, who is able to possess her by touch — something we didn’t know Loki could do — and we finally get to see the two Loki variants communicate with each other as she possesses a number of different hosts.

It’s a lot of fun seeing Loki quickly tire of being on the receiving end of his own quirks and theatrics, similar to how Steve Rogers couldn’t stand his earlier self in Avengers: Endgame, but this is just a prelude to the big twist. 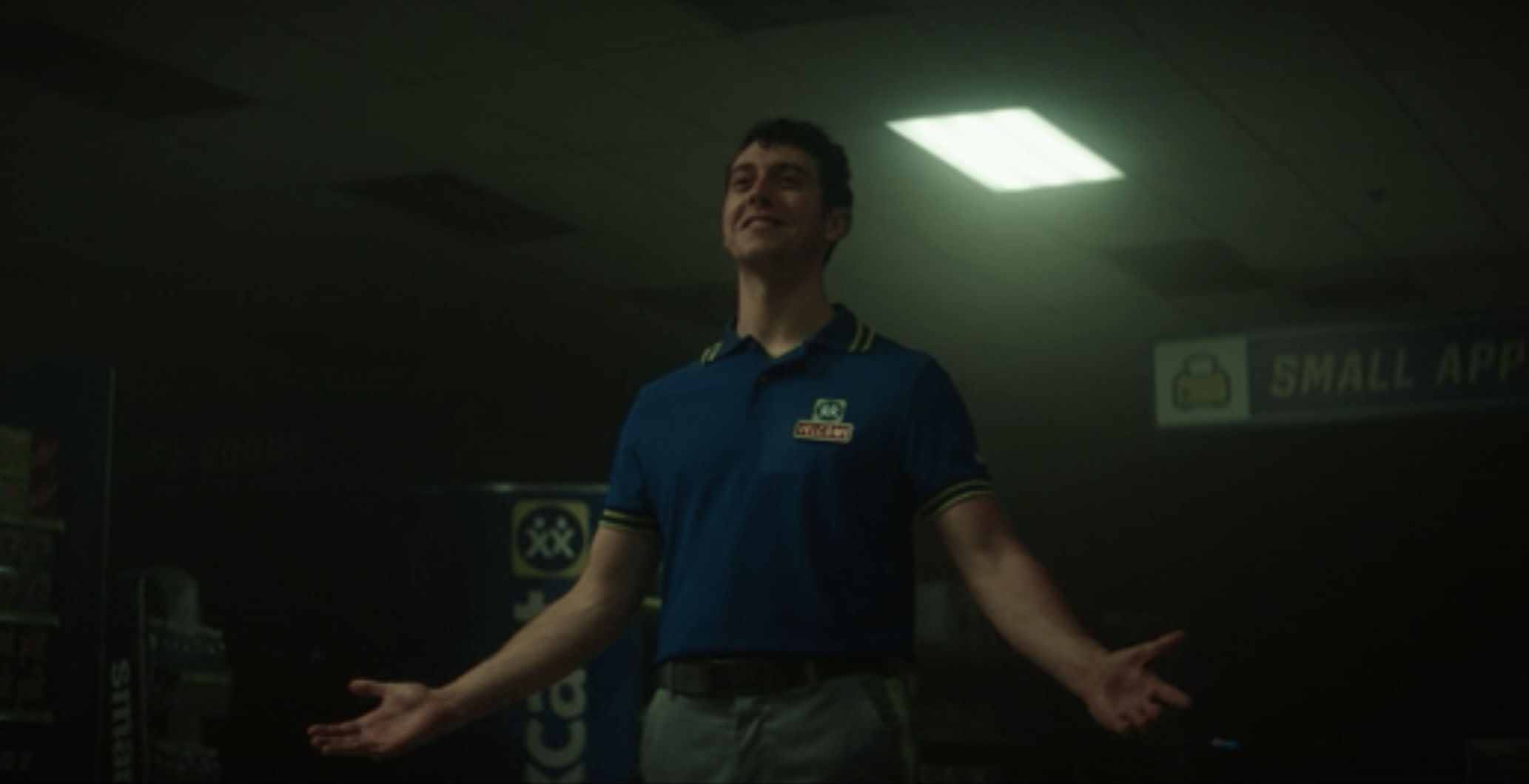 This twist is that the variant is none other than Lady Loki! We don’t know if she is using her name from the comics, as she does say that she doesn’t go by that name any longer, but that is clearly who this is. It was pretty clear that this would be the episode’s big reveal, as the show has laid a lot of groundwork to make this happen. She is played by Sophia Di Martino (Yesterday), who was reportedly part of the show in an unknown role (until today).

Last episode, the TVA listed Loki’s gender as “fluid”, and at the beginning of the episode Mobius shows off a bunch of Loki variants that they’d already killed, revealing a collection of different physical forms. Combine that with the fact that the Loki variant had been cloaked up until this point, and it was clear that we weren’t going to get two Tom Hiddlestons bouncing off each other. 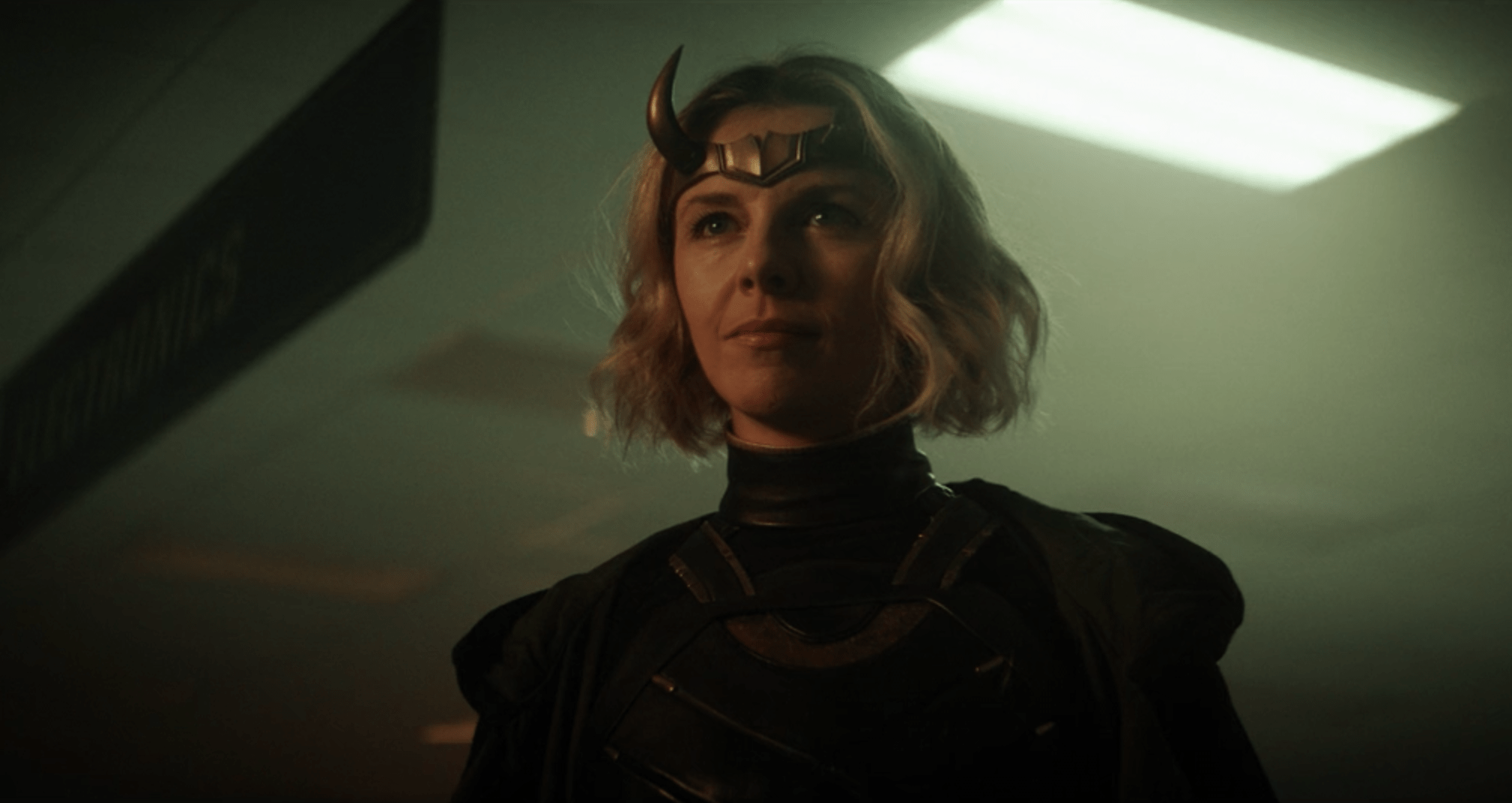 The cliffhanger is an intriguing one, with Loki abandoning the TVA and racing through the portal after Lady Loki, who sets off multiple reset charges to create several nexus events. It won’t help build any trust with Mobius, and splits up a partnership that had been equally interesting and hilarious, but this will hopefully give him an opportunity to spend lots of time interacting with Lady Loki in the next episode.

It seemed this show’s premise was Loki travelling through time with the TVA each episode, but Loki has already thrown us a curveball and split him up from his captors two episodes in. It’s difficult to predict what comes next, and that’s exactly what the god of mischief would want.