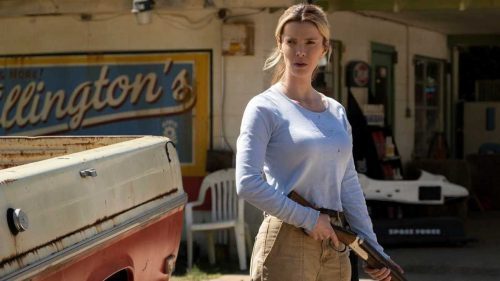 Seemingly derailed in 2019 after comments from Donald Trump, Blumhouse’s latest horror film The Hunt has a new trailer.

With a cast that includes names like Hillary Swank and Betty Gilpin of GLOW fame, The Hunt explores a world where elites hunt ordinary humans for sport. Written by Damon Lindelof and Nick Cuse, the synopsis of the film is:

“In the the shadow of a dark internet conspiracy theory, a bunch of elites gathers for the very first time at a remote Manor House to hunt humans for sport. But the elites’ master plan is about to be derailed because one of the hunted, Crystal (Betty Gilpin), knows The Hunters’ game better than they do. She turns the tables on the killers, picking them off, one by one, as she makes her way toward the mysterious woman (Hillary Swank) at the center of it all.”

It will be interesting to see how the media reacts to the marketing of this film, especially during an election year. Luckily, based off of the trailer, the film doesn’t take itself too seriously and will have its fair share of comedic moments.

Directed by Craig Zobel, The Hunt will hit theaters on March 13 in the United States. No word yet on when overseas markets will experience the latest Blumhouse feature.