Filling in the Gaps: On the Town 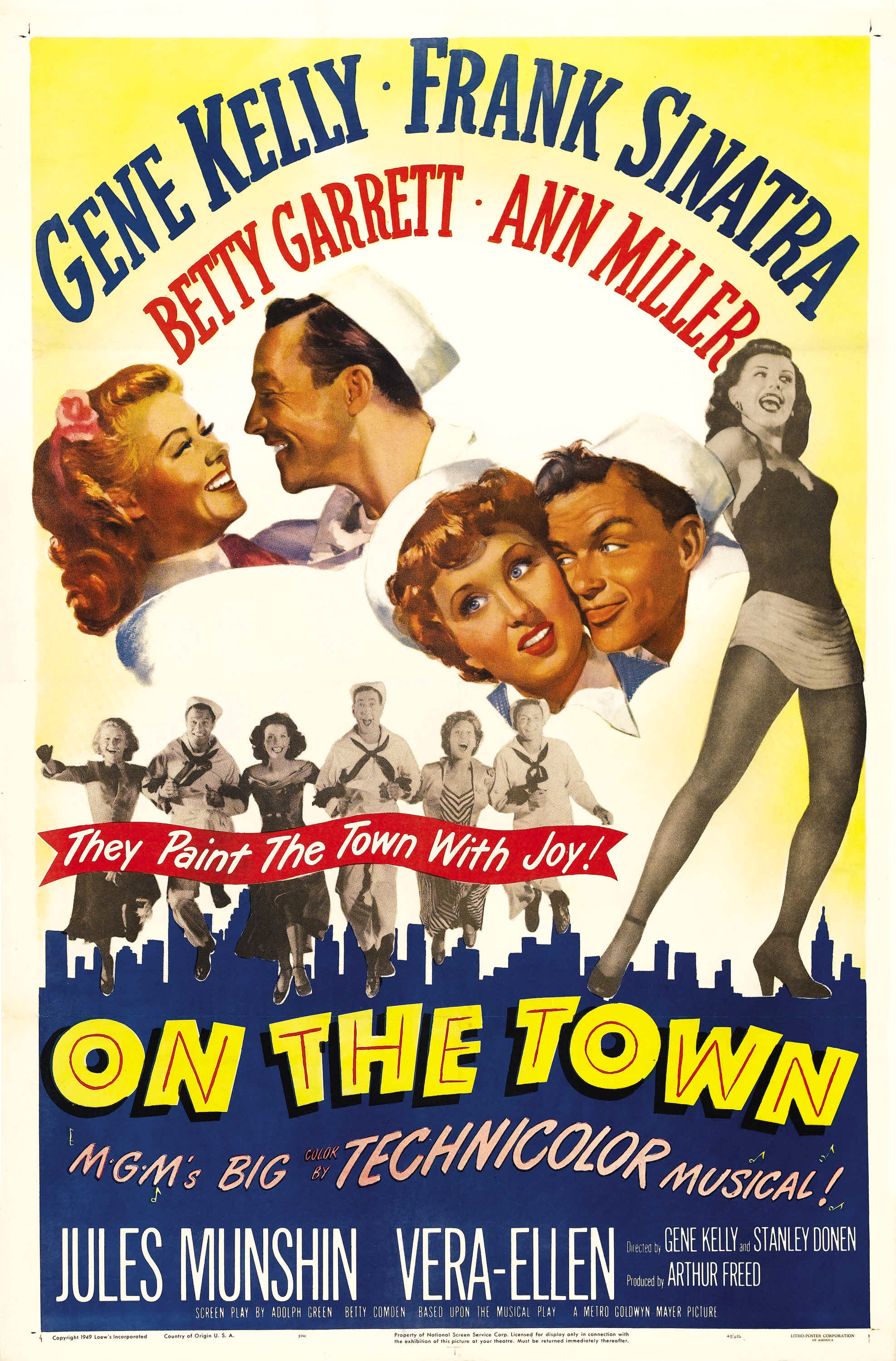 Even among film lovers, musicals are always a point of contention. Some hate them for their lack of realism, their often overly sweet or melodramatic tones, and all that darned singing and dancing. On the other side of that debate are those who find movie musicals to be sort of the extreme ideal of early cinema fantasy. Classic film turned up to 11 if you will.

I definitely lean more towards the latter rather than the former of those descriptions. As a lifelong fan of movie and Broadway musicals I’ve built up the necessary mental callouses that prevent me from rolling my eyes when a character suddenly breaks into song. But, I also understand how it can bring a person out of their tenuous suspension of disbelief when that invisible orchestra kicks in out of nowhere. 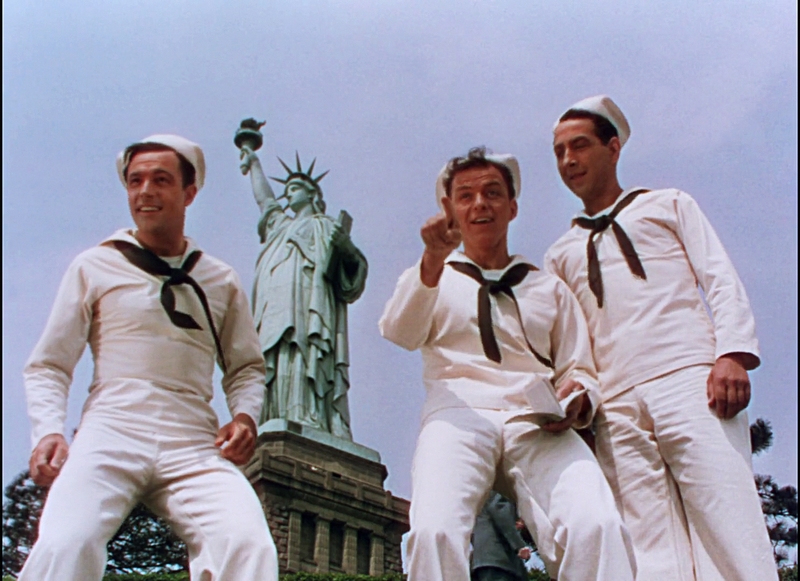 On the Town, however, is a test for those who may shiver at the first sound of singing in a movie. It is a musical in every sense of the world. It is light, it is over the top, it is silly, but it is very interesting movie on a number of fronts.

On the Town was made in 1949 and features two of the biggest stars of post-war Hollywood in Gene Kelly and Frank Sinatra.  The film’s plot is about as basic as it comes. Three men (Kelly, Sinatra and Jules Munshin), on a 24 hour shore leave from the Navy, hit NYC to find adventure…and “dates”. Those dates are played by Vera-Ellen, Betty Garrett, and Ann Miller who all bring their a-game as various points of romantic interest and comic relief.

It’s almost sweet how innocent and euphemistic these early Hollywood movies can be. Watching it you can’t help but be somewhat aware that a Navy man on leave during World War 2 wasn’t really spending his 24 hour leave hitting Rockefeller center and dancing about town. But that innocence provides a lot of the charm of the movie.   In many ways it feels very dated. It’s definitely a movie that would probably not be made today. There are moments and musical numbers throughout where I couldn’t quite figure out if I was offended or amused by era.  There’s one particular musical number about cavemen that takes place in the Natural History Museum (or a soundstage very loosely recreating it anyway) that left me feeling quite confused as to whether it was cute, racist, or just really dated. In the end, I lean towards the last option as I do with most of the similar moments in the movie.

But On the Town does have quite a lot going for it other than being a window into an era. It was famously marketed as the first studio musical to be shot on location. This is technically true, and the scenes that are shot in Manhattan are a nice window into what the city looked like in the 40’s. But there are only really a few scenes filmed outside of a Studio, most of them coming in the film’s famous opening number New York, New York (not the same song Sinatra would make iconic later in life). 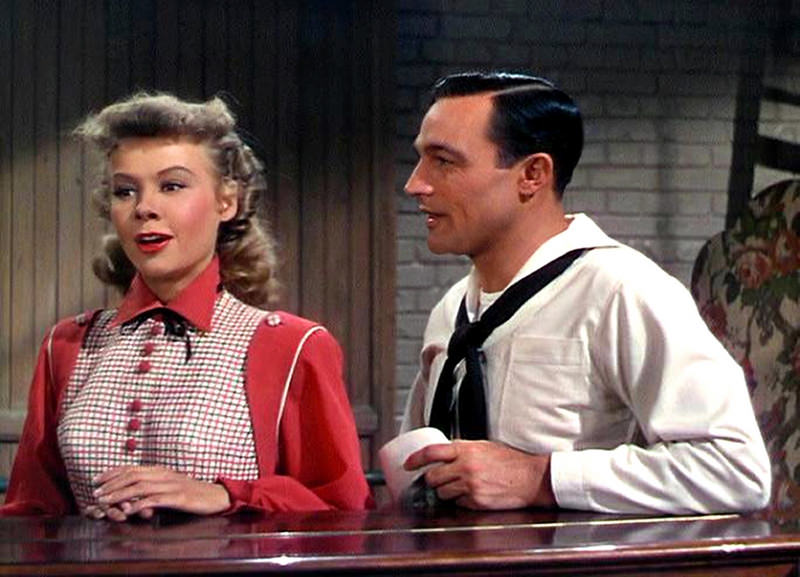 As for Sinatra, this film was a bit of a departure for him. Already a huge superstar (so much so, that the crowds he drew in NYC made it difficult to film some of the on location scenes), he apparently wasn’t much for a dancer.  Kelly, who also choreographed and co directed, was a legend for his dancing so some dancing was to be expected.  As the story goes, Kelly had to tone down some of his own moves so as to not make Sinatra look bad. So, if you are looking for a film to see Kelly’s virtuosic dancing, this may not be the best example (try the legendary and far superior Singin’ in the Rain for that).

All in all, the film is good fun. The music is lively and at times memorable, there are number of very funny scenes, and the actors all seem to like hamming it up in just the right ways. It’s not going to stick with you as a “best ever” type of film, but it is lightweight and very entertaining for when that mood hits you. 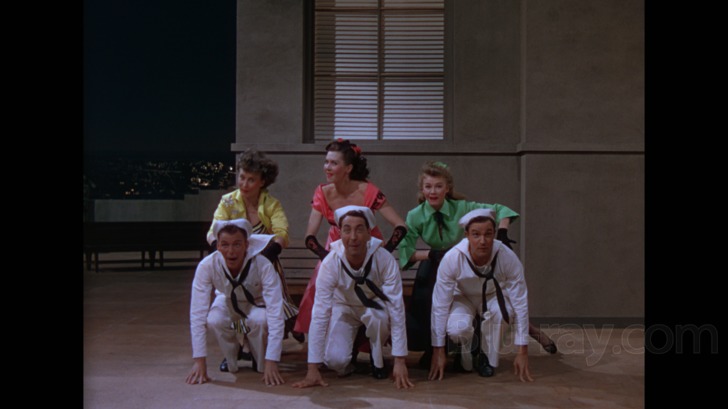 Recommended for: Musical lovers and Sinatra fans only