‘The Lord of the Rings: The Rings of Power’ Reveals First Look at the Orcs 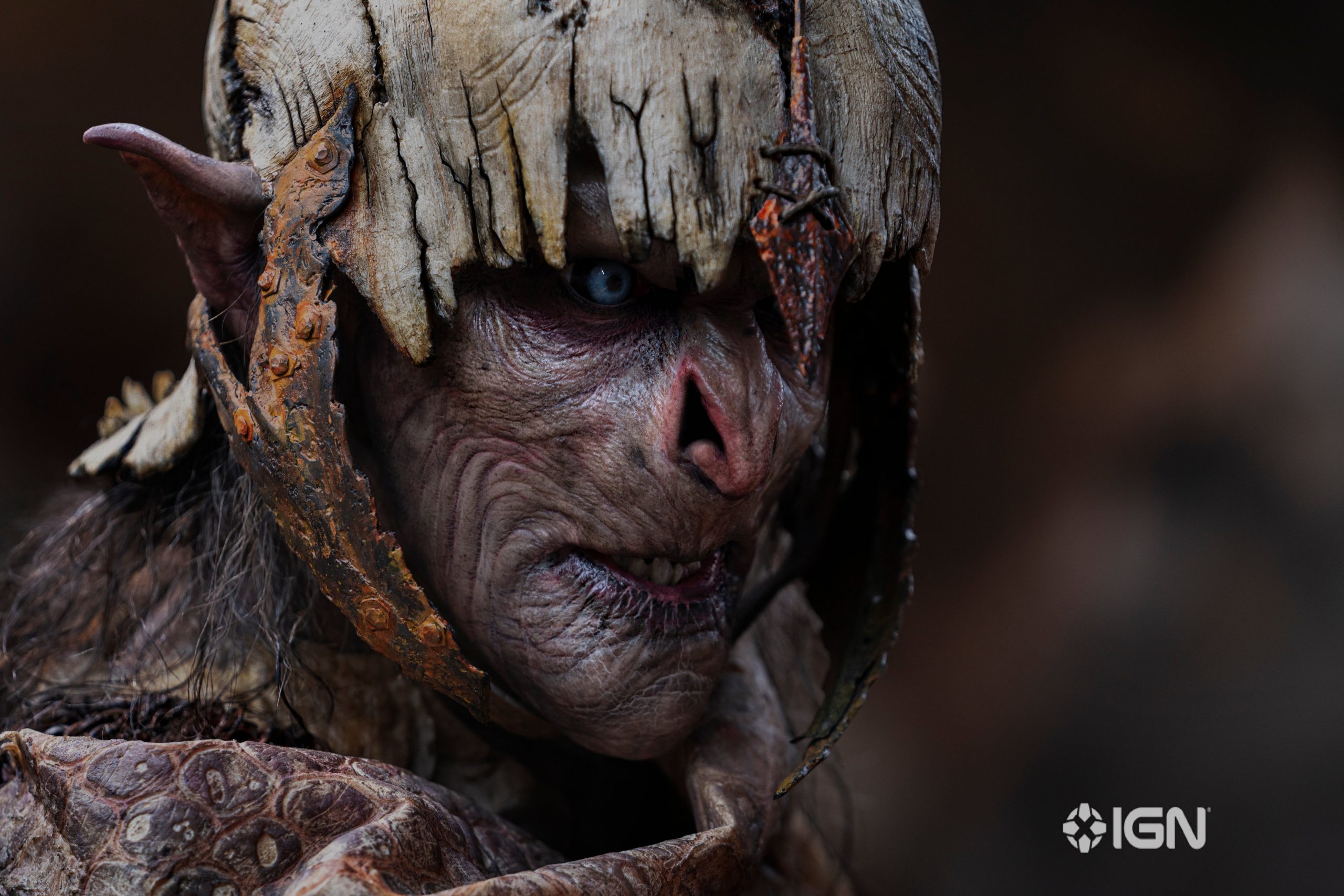 IGN has exclusively revealed our first look at what the Orcs will look like in the upcoming The Lord of the Rings: The Rings of Power series for Prime Video.

During the Second Age, when the show takes place, the Orcs are scattered across Middle-earth, at least the very few that survived the War of Wrath at the end of the First Age. IGN sat down with executive producer Lindsey Weber and head of prosthetic department Jamie Wilson to discuss how they brought the Orcs to life in the show. Weber started by saying the following:

“Well, I love Orcs. I love creature design, so I’m very happy to talk about this stuff. JD and Patrick — the showrunners — the very first page of their bible was about Orcs. They have a real passion for them, they love practical prosthetics and design, and they felt that they needed exploration given that this is the Second Age and thousands of years before the events of the Third Age. It was really important to them to treat them as their own culture and explore their world on its own two legs in its own right.” 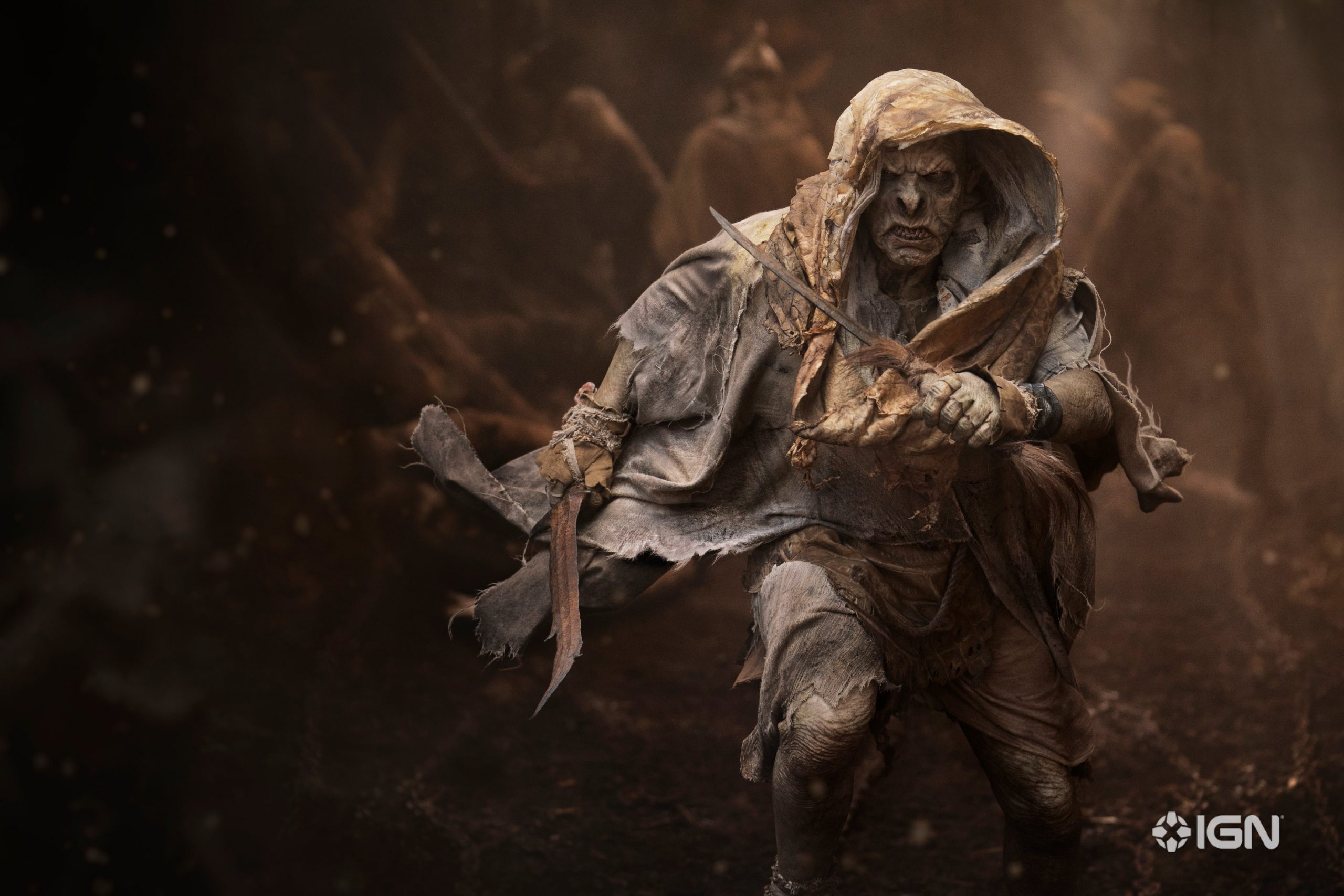 Of course, this is an Age we haven’t really explored before in live-action, and that also applies to the Orcs. They are very different from what we see in the Third Age in Peter Jackson’s films, both in looks and in their way of life, as Weber explained:

“We spent a lot of time talking about what it would mean to be an Orc in the Second Age. It felt appropriate that their look would be different, part of a wilder, more raw, Second Age, Middle-earth, closer to where the First Age ends. As we meet them, they’re not yet organized into armies, they’re a little more scattered and they’ve been scavenging. So it’s just a different time in their total story.” 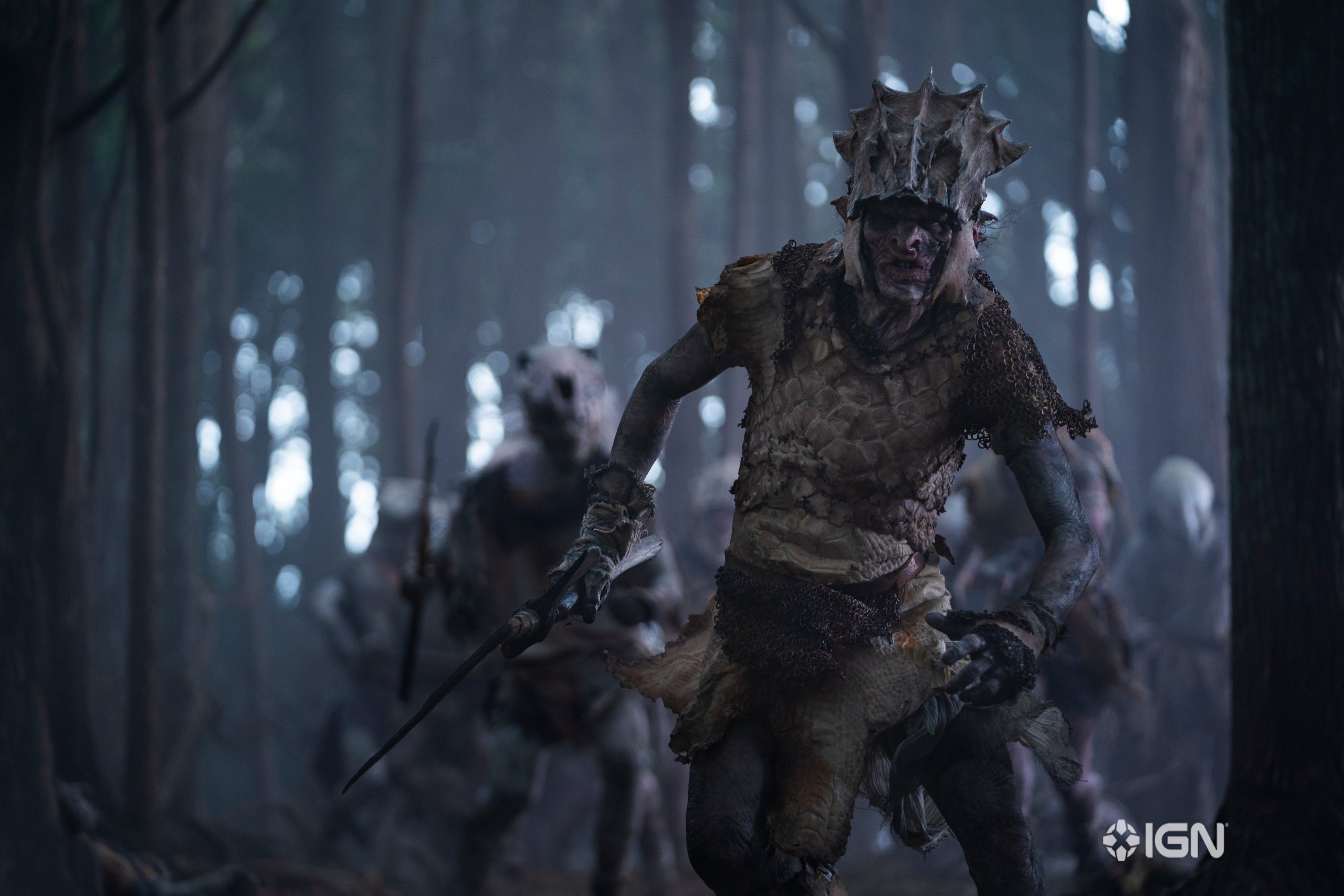 Wilson then teased that, even though they are almost extinct and have been living in isolation for a long time now, there is one who could unite them:

“They [the Orcs] kind of disappeared. Everyone thought, ‘Yay, they’ve been wiped off Middle-earth.’ But really they regressed into the dark in small little groups, and hid away, and lived in tunnels and sort of under Middle-earth, because the only way they could hide, because of course they were hunted for so long. So this is really them coming back out as they reform under a so-called new leader who’s going to lead them forward.”

Weber also revealed that we’ll meet our first female Orcs in The Lord of the Rings: The Rings of Power, and teased a major confrontation with an Elf:

“There’s some female Orcs that I truly loved. But there’s one Orc in particular, who’s very, very tall and strong, who has a particularly enjoyable fight with one of our Elvin characters that I suspect will be, or hope will be a favorite among fans.”

They wouldn’t reveal, though, if we’ll get to see the creation of the Orcs. That took place in the First Age, but the teaser trailer released in February already teased some flashbacks to the First Age, with the character reveal of Finrod, so it’s very much possible we could see how they were born. 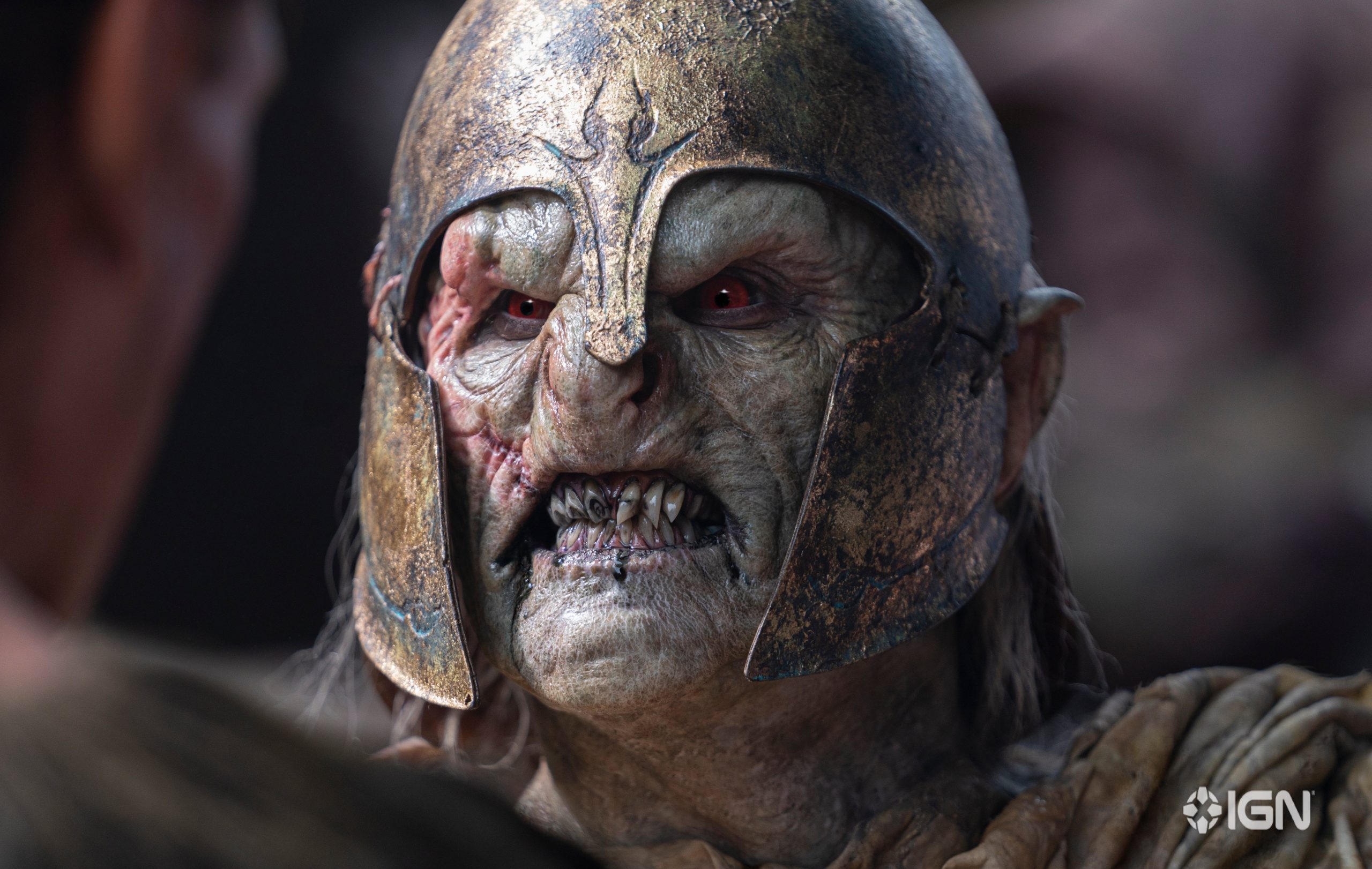 Weber then explained how his team approached creating the new look for the Orcs, which is different from their future selves in the Third Age:

“The way I described it to my team, it’s a bit like these are the baby versions. They’re not actually babies, but it’s them coming out from the darkness. So this is early on. So for example, if you go to past films about them, you’ll see them and they’re quite battle damaged and scarred and all that kind, because there’s been lots more battles. This is kind of before the next range of big battles. So there’s a lot more smooth texture. There’s still wrinkles, and lines, and shape, and form, but they’re not so battle scarred, but they are dealing with some skin conditions because of their exposure to the sun. They’re coming back out for the first time again. So it’s all a bit new. That’s why they’re not as dark skinned, necessarily not as muscle-y and not as battle worn as you’d seen in previous productions.” 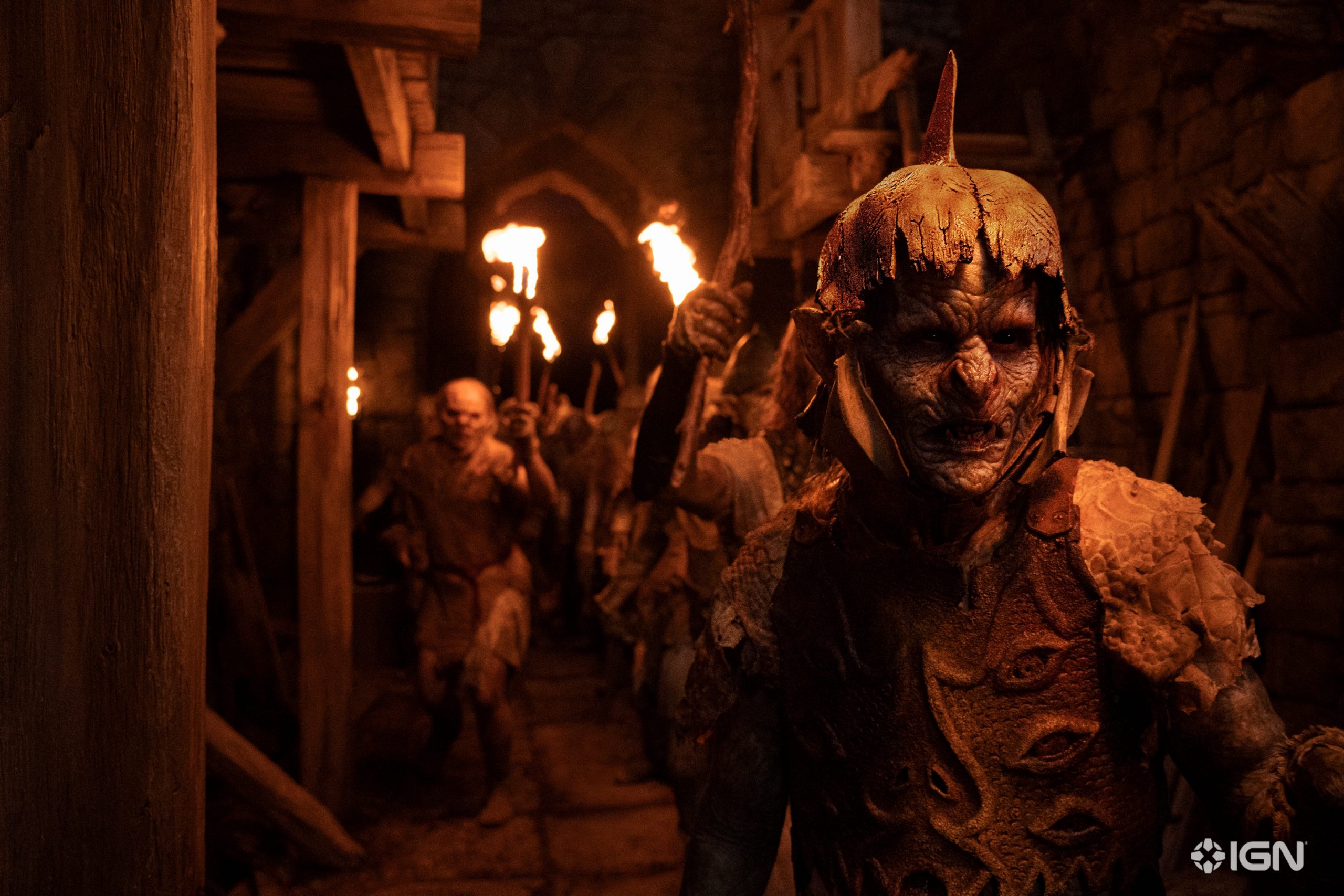 Wilson went on a behind-the-scenes deep dive on how they used practical effects in the series to create the creatures:

“Time has changed a lot. You go back 20 years and we used a basically foam latex, which is like a porous-y kind of rubbery, spongy material with a smooth or whatever textured surface. It was great at the time. But it was actually just at the end of doing ‘Lord of the Rings’ that we did the very first encapsulated silicon for Gimli. At the end of that, he got to start wearing silicons, but now it’s common. So all the ears, noses, Orcs pieces are all made in encapsulated silicon, which is basically two layers of silicon with a moveable piece of silicon in the middle, so when it’s applied to the actor’s face, they can move and it works. It also gets the same temperature as their skin. And you can see the translucency and then you gently paint on the top of it, a bit like doing makeup on a human rather than having to seal and heavily paint like we did in the old days.”

“The most sophisticated prosthetics are thin and nimble and allow people to move their mouths really freely and emote in all the ways human faces do. We work really hard to make our prosthetics really thin and more comfortable for our performers and all of that. But there are times when they’re wearing things, teeth for example, and all sorts of other stuff that do make that hard. And over time, as you’re shooting, those things can just take on a little wear and tear as the day goes along.”

And Wilson then explained how the series enhanced those practical effects through CGI:

“In this particular production, we work very closely. In fact, directly together because at the end of the day, you will have visual effects involved, that might be minor tweaks, right. A lot of it, because bear in mind, when you get into stunts and action, some of the stuff the human physically can’t do. So therefore it turns into a visual effect. So there was a lot of that. Also, a lot of stuff with prosthetics is beasts and creatures that then need further enhancements or whatever. So there was a very close link.” 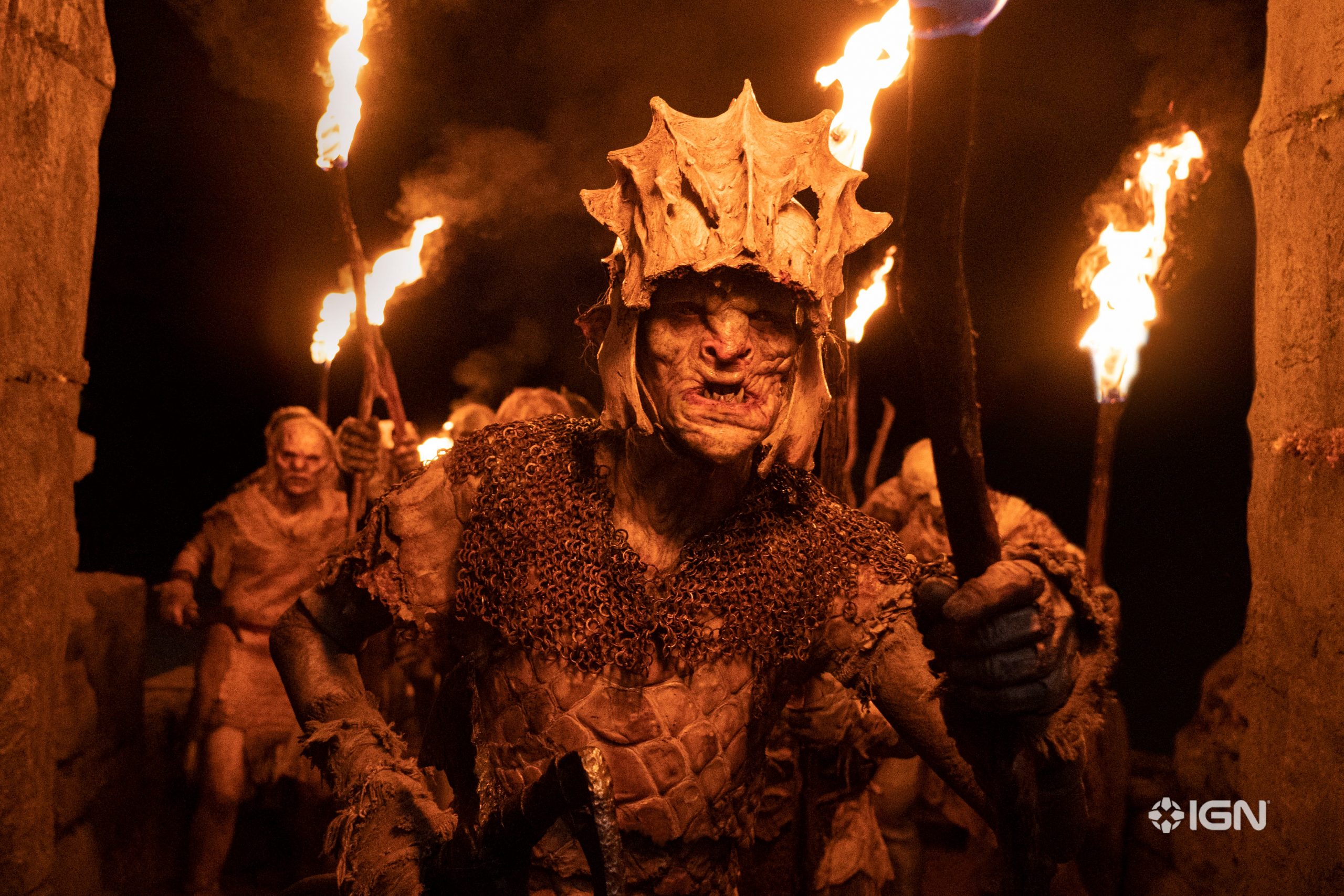 Weber then made sure to clarify that CGI is used in The Lord of the Rings: The Rings of Power to enhance the practical effects work, not to overshadow it. Every single film nowadays uses CGI, some with a heavier presence than others, but the goal is always to make it look as real as possible. And that’s what they tried to do here (and the results can already be seen in these images):

“When they are up close to the camera, Orcs are really practical and almost exclusively. And the places where the visual effects team help, we’re in more numbers when we need larger quantities than you could amass on a film set anywhere in the world. That’s what they sort of, when they come in and do some of, work their magic. We did a lot of planning so that we knew in advance which performers would be closest to camera and they looked fast and then as you get further back, they had simpler applications in some cases to allow for those things because it was so important to us to have them all be as in camera as they could be to get everyone in the mood and make it feel real as we were shooting.”

“We did decide from the outset that we would try and make this a very real show. So therefore, we tried to use real prosthetics and everything and minimize the visual effects, because there are hundreds of productions that are heavy on visual effects, and you can see it, that the human eye is getting better and better and knows what is real and knows what isn’t, because we are just getting so deloused with all this product that you begin to know.”

The marketing campaign for The Lord of the Rings: The Rings of Power is very much underway. We’re getting new previews almost every week, and we are a month away from San Diego Comic-Con, where Amazon will reportedly deliver the main trailer for the show. Deadline confirmed last week that the studio has booked Hall H to host a panel that will feature the stars and creators of the show, and according to TheOneRing.net, the studio will also have an immersive Middle-earth experience at the convention.

TORn is also saying that the six weeks between Comic-Con and the release of the show will be a constant stream of Rings of Power marketing, with Jeff Bezos spending every dollar available to put The Lord of the Rings on everyone’s mind. This week, they already started with some promotions when they released the following spot:

The Lord of the Rings: The Rings of Power will debut on Amazon Prime Video on September 2nd.