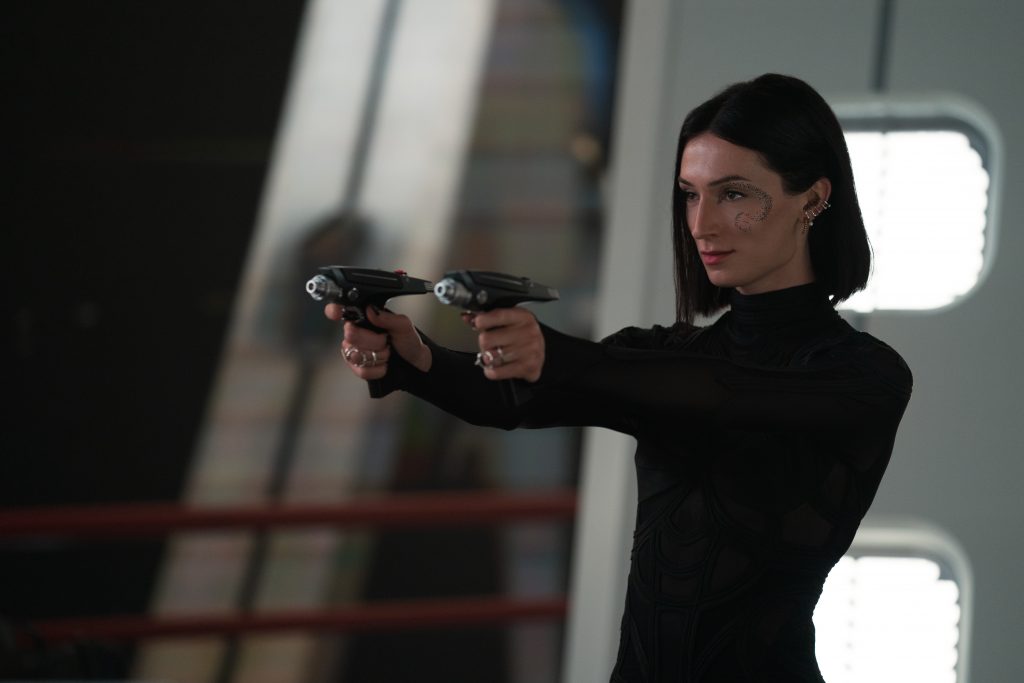 Greatness is the standard in Star Trek: Strange New Worlds, and Episode 7: The Serene Squall delivers an instant classic.

There are some wonderful twists in this episode, but the one who stole the show was guest star Jesse James Keitel. Her performance was simply astounding and a historic one at that. Keitel, a trans woman, portrayed the first non-binary character introduced into Strange New Worlds. It was a groundbreaking performance and absolutely broke the mold trans actors have been relegated to playing in the past. I will get into more about this character soon, but for the sake of spoilers just know they will keep you on the edge of your seat.

The episode centers around the Enterprise venturing outside of Federation space in pursuit of colonists that are suspected to have been kidnapped by pirates. It’s a dangerous move to venture beyond their borders as Captain Pike (Anson Mount) refers to the sector of space as the Wild West. Ultimately, the Enterprise does find itself in the clutches of these space scoundrels. Using their daring and creativity the crew must navigate an intricate web of betrayal and regain control of the flagship of Starfleet.

Babs Olusanmokun as M’Benga, Rebecca Romijn as Una, and Anson Mount as Pike

As usual, Strange New Worlds episode 7 presents fully compelling storytelling with a cast so picture perfect it’s impossible to say enough wonderful things. The Enterprise itself is absolutely breathtaking to look at. It’s as sleek and sharp as it needs to be while presenting an elegance and beauty becoming of such a remarkable vessel. We get a heavy dose of Spock (Ethan Peck) and Nurse Chapel (Jess Bush) and we reap some reward from the seeds they have planted into their dynamic throughout the season. This show is a wonderful treat each week and gets better with each passing episode. Continue on for some spoilerific conversation.

As I said previously, Jesse James Keitel stole the show this week as she poses as a former Starfleet Counselor named Dr. Aspen. Under this disguise, they convince the crew to undertake a mission outside of federation space where their crew of pirates are ready to pounce. Before revealing themself as the audacious Captain Angel, they form a unique bond with Mr. Spock. The two engage in some truly enlightening conversations about self-discovery and breaking down the boxes our societies try to place us in. Spock’s soul searching has been a major plot point throughout the season and it’s preyed upon here by Angel in an effort to gain his trust. A plan that succeeds perfectly.

Something the show does very well is disguise Angel’s betrayal in plain sight. I must say, like Mr. Spock, I was duped. In my re-watch, I noticed all the signs I should have been looking for. Angel clearly had a firm understanding of what the Enterprise was facing despite having few previous encounters. They butter up the Captain almost too perfectly. The outfit changes from a comforting blue to an athletic black fit that simply screams villainous vibes. I credit everything to Jesse James Keitel. Her performance was more than just spectacular, but it was personal. I felt personally betrayed by her as I watched Angel turn on the crew. The feeling of betrayal quickly turned to awe as I sat marveling at the bodacious performance being displayed. Capturing the essence of a pirate captain willing to turn on everyone in an instant with no remorse is no easy task in itself. Couple this with being able to intertwine a complex personality and a dialogue-driven villain filled with nuance and suddenly you have something really special.

The driving force behind Angel wanting the Enterprise is centered around a desire to capture Spock. They need Spock in order to have leverage against T’Pring, his betrothed. T’Pring works at the Ankheshtan K’til, a rehabilitation center for Vulcans who have strayed away from the path of logic. Angel hopes to exchange Spock for a Vulcan named Xaverius, Angel’s lover. Spock, deducing who this prisoner is, knows they must keep Xaverius there at all costs. In a ploy to convince T’Pring not to hand over the Vulcan, he and Nurse Chapel engage in a truly passionate kiss in front of the view screen. After displaying this fake affair in front of T’Pring the two promptly end their engagement.

Spock and Chapel’s relationship has been a budding interest of any fan of the show so far. The two clearly have chemistry and Chapel appears to harbor some type of feelings towards the science officer. Spock’s feelings are not quite as apparent, but my gut tells me something exists. That was one passionate kiss after all. 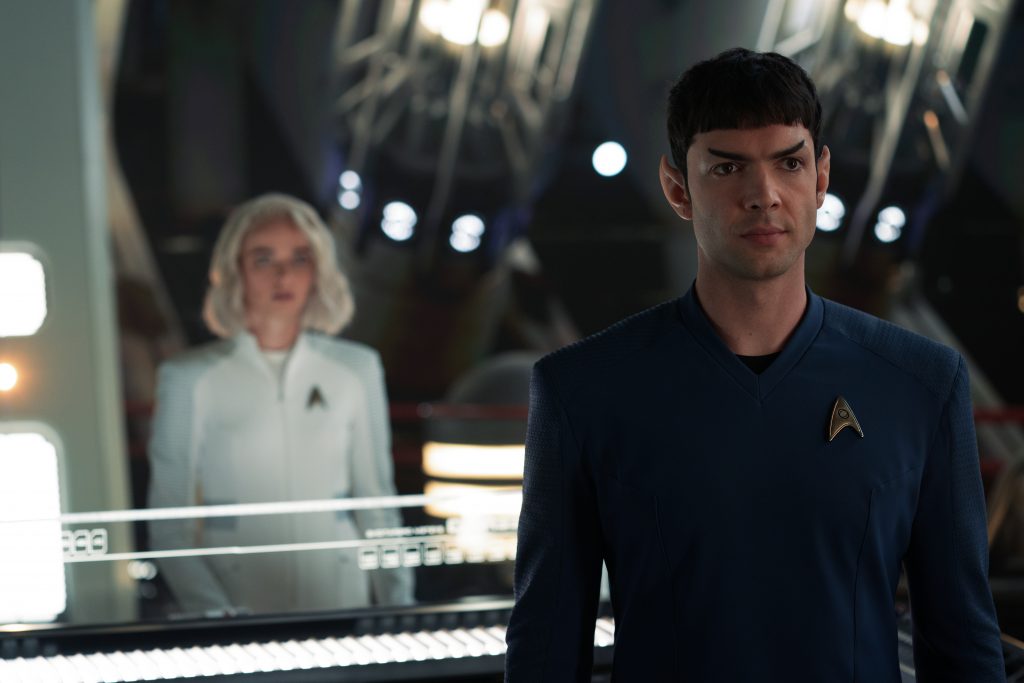 Jess Bush as Nurse Chapel and Ethan Peck as Spock

With the mission gone awry, Angel orders her brigands to destroy T’Pring’s ship. To their dismay, they discover Captain Pike and the crew have been up to a little something while being held prisoner aboard the pirate ship. The captive crew engages in a little exercise they have dubbed Alpha Braga IV. In what is a hilarious bit, the crew starts a mutiny. Pike is absolutely hilarious in this one and Anson Mount continues to display his versatility as a captain. He delivers the wit and charm when he needs to in this episode while also giving a resounding “Get the hell out of my chair” to Captain Angel.

After successfully taking back control of the Enterprise, Angel beams aboard a secret vessel and makes a quick escape. Spock is left to pick up the pieces of this betrayal and attempts to patch things up with T’Pring who was rather understanding about the whole situation. The most exciting reveal was that the Vulcan named Xaverius is none other than Spock’s half-brother Sybok, whom Spock was warned to stay away from at all costs.

In closing, Star Trek: Strange New Worlds episode 7 proves once again the series is groundbreaking. Because of its stellar cast and episodic storytelling, it can be anything it wants to be. One week it’s a horror show and the next it could be a comedy. It’s a breath of fresh air every Thursday. It’s without a doubt my favorite show currently airing and continues to get more exciting week in and week out.