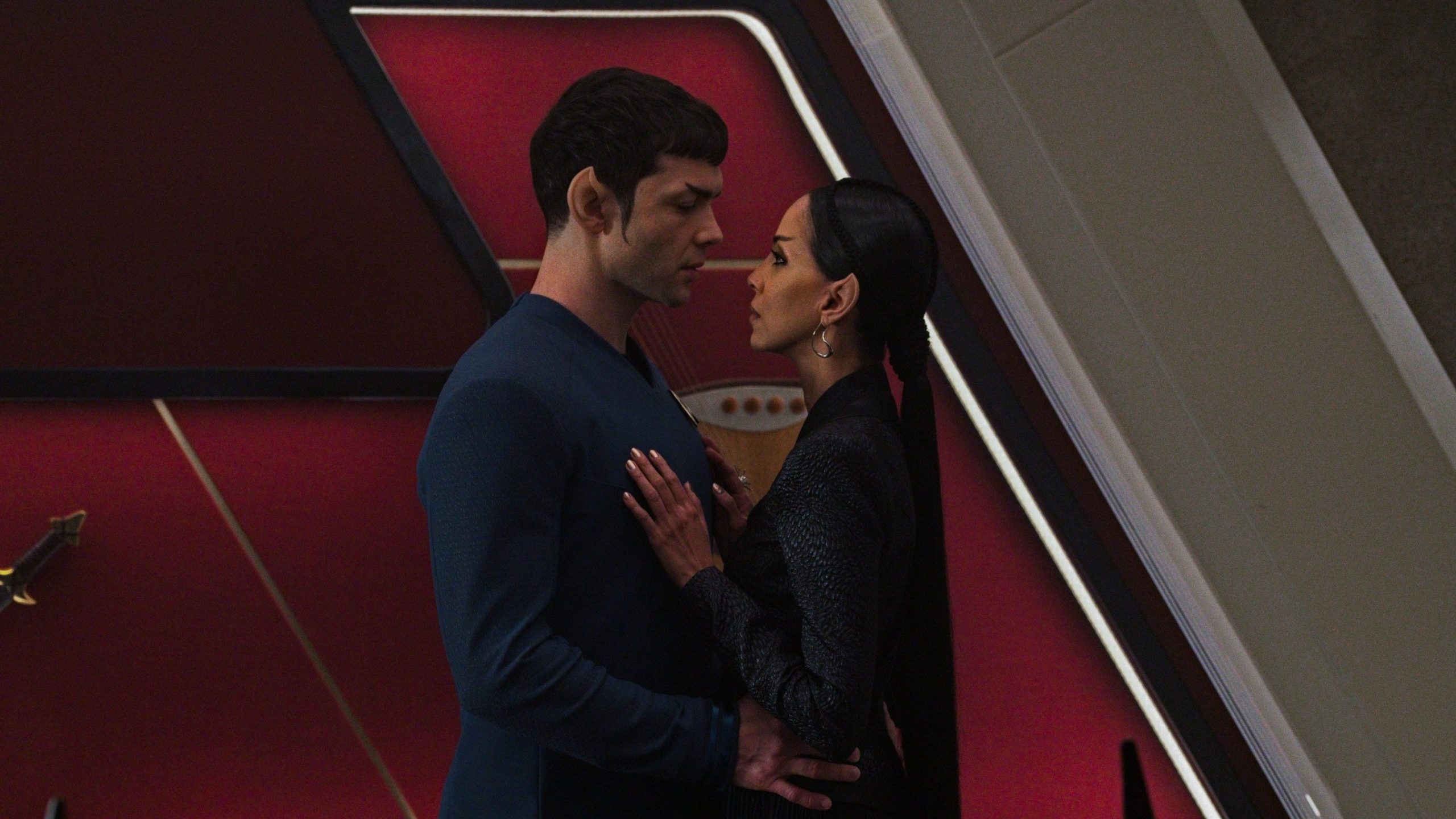 At this point, it’s almost offensive how good Star Trek: Strange New Worlds is. If you are tired of me singing songs of praise for this show week after week, I am sorry, but you are going to have to sift through another one.

Last week, we saw the show handle an action-packed horror episode to perfection. This week, it took its first stab at comedy. Episode 5, Spock Amok, keeps you ear to ear grinning all the way through. While I greatly enjoy Star Trek: Discovery, it’s been a long time since we have experienced carefree fun in live action Star Trek. After holding your breath for an hour last week, you get to let loose and enjoy a few laughs with this one. While it doesn’t necessarily push the larger narrative forward it may provide one of the most memorable episodes for the entire season. From Spock (Ethan Peck) and T’Pring’s (Gia Sandhu) hijinks, to Una (Rebecca Romijn) and La’an’s (Christina Chong) playing good cop bad cop, there is not a dull moment in sight. Star Trek: Strange New Worlds has taken a crack at several different types of Trek in its first five episodes, and this cast and crew has shown their quality through and through.

After the damage the Enterprise took at the hands of the Gorn it makes a repairs pit stop which allows the crew to engage in some much-needed shore leave. Nearly the entire crew is excited and purely content, but not Spock. The Spock we met in season 2 of Star Trek: Discovery was one who was still coming to grips with being half Human and half Vulcan. He was wrestling through strained relationships with his sister Michael and his father Sarek. This struggle for belonging is manifested in a literal nightmare as his Human and Vulcan parts engage in a fight to the death. He is plagued by fear of not being “Vulcan enough” for his betrothed while still having some doubts about being “human enough” for his crewmates. The imagery in the nightmare perfectly matches what we have seen in The Original Series. Spock attempts to balance time with T’Pring, who is coming aboard the Enterprise, with assisting Captain Pike (Anson Mount) in negotiations with a difficult to read species called the R’Ongovians. Struggling to find a balance between his duties to Starfleet and his devotion to his relationship, Spock is on edge throughout most of the episode. 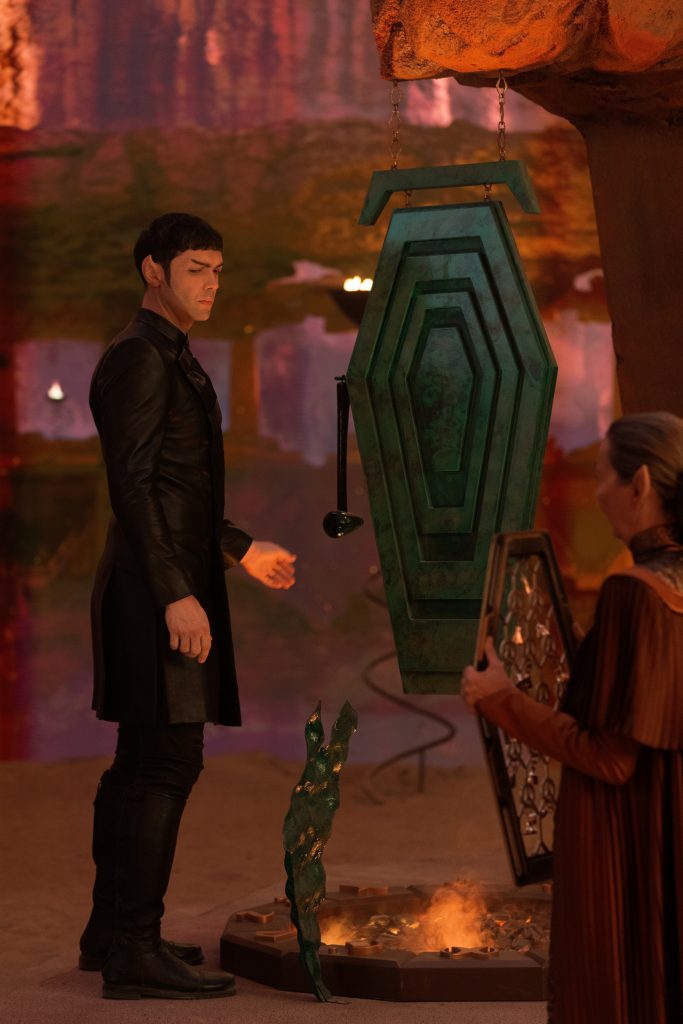 With Spock and T’Pring, the fun begins when the former attempts to engage in a spiritual ritual of sorts with the latter. This ceremony is meant for them to enter each other’s minds and, in a sense, to “fully know” the other. While many Trek fans know this relationship is not destined for a happy ending I must say I do sort of enjoy them together. The prior mentioned “hijinks” begins when the ceremony doesn’t quite go as planned. Instead of returning to each other’s bodies at the conclusion of the ritual their minds stay in the other’s body. Spock is now in T’Pring’s body, and T’Pring in Spock’s. This is, of course, right when Pike makes an entrance needing his Science Officer’s help. I was cackling watching the absolutely spot on facial expressions Pike was making as the situation was being explained to him. Ultimately, they are forced to send a T’Pring occupied Spock to assist in currently failing negotiations. It’s not long after this Spock is then forced to take on an incredibly important assignment for T’Pring’s job. The hilarity of it all is just perfect.

The fun and games don’t stop there! As Chapel (Jess Bush), Ortegas (Melissa Navia), and M’Benga (Babs Olusanmokun) are about to be transported down, they make a terrible mistake. As they are escorted out by Commander Una and Lt. La’an, they absentmindedly mention Una has a reputation for being… no fun. Rather than engage in some fun off the ship the two of them are eager to begin a thrilling few days of data reports, crew manifest updates, number crunching, and routine manifest. They certainly plan on living up to the “no fun” mantra. That is, until a couple of young crewmembers get caught doing something they shouldn’t.

After apprehending the rule breakers, the commanding officers engage in a perfect good cop bad cop routine. This bit alone would have made me content with the entire episode; it was just flawless. Discovering the rule breakers were playing a game of Enterprise Bingo, a game the no fun tag team has never heard of, inspires them to loosen up a little. The two set off on a quest to be rebellious, and while it’s backbreaking work for these two, they ultimately succeed. Their triumph results in one of the more beautiful scenes Star Trek: Strange New Worlds has given us thus far, and serves as a reminder of how to enjoy each moment and to cherish the simple things. These two share such a natural chemistry with one another, and the joy they seem to have working together is infectious. 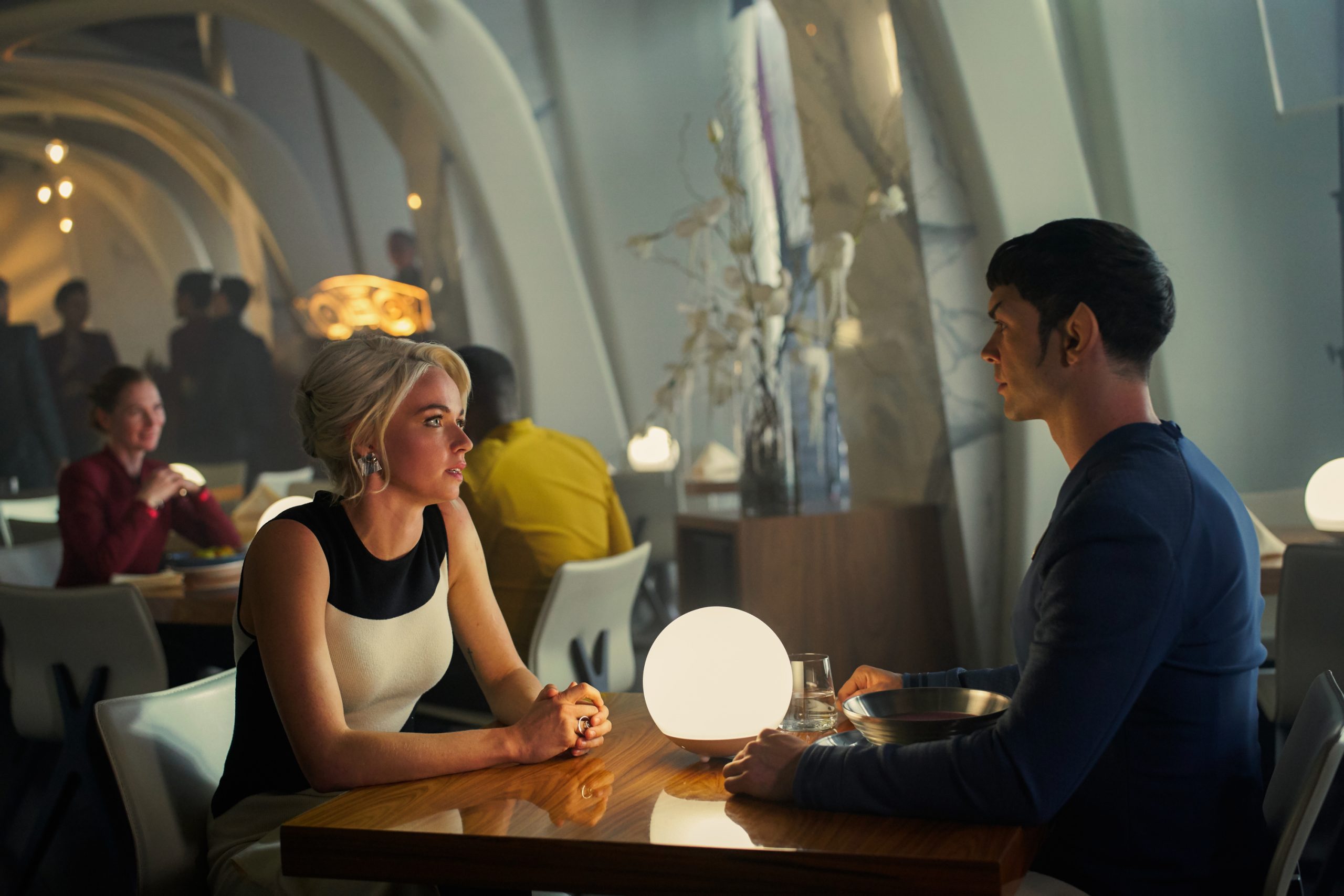 Jess Bush as Nurse Chapel and Ethan Peck as Spock

With hijinks surrounding the episode, Ethan Peck and Gia Sandhu did a sensational job portraying an off-beat version of their characters due to the unorthodox situation. Having already sought relationship advice from Chapel, Spock goes to her again for help as he attempts to take on an urgent matter for T’Pring’s work. With Spock posing as T’Pring and with Chapel, someone he trusts, at his side he attempts to work some magic on the rogue Vulcan his betrothed is tasked with engaging. The confrontation ends in the only way an episode like this demands it should. With an annoyed Mr. Spock knocking the lights out of the arrogant Vulcan. Not lost in all of this, at times, somewhat silly episode (I am here for most of the silliness though) is a feeling Chapel may be nursing some romantic feelings for Spock. I’m not sure she even quite knows what to do or how she feels, but something seems to be there. It probably will never happen, but for what it’s worth I am shipping the two of them.

On the other end of the wrong body fiasco. T’Pring is engaging in some less than stellar talks with R’Ongovians. The Federation desperately wants an alliance with them as they hold a key piece of territory. The Klingons and Romulans are both actively in pursuit of the same alliance, and it’s crucial to the goals of the Federation that doesn’t happen. The R’Ongovians claim they pride themselves on their radical empathy. Ultimately, they don’t want to be given a traditional sales pitch; they simply want someone to see their side in all of this, and most importantly, acknowledge it. Ultimately, Pike understands this, and it’s fitting he does. This idea of “radical empathy” is a theme central to what Star Trek is and as the show’s leading actor, the one who sits in the captain’s chair it’s important he embodies this too. Pike meets the moment, and ultimately an alliance is formed.

While the ritual for the engaged couple didn’t go as planned, it did accomplish the primary goal; allowing them to fully understand the other. The relationship, as we know, is headed for disaster, but it was soothing to see them share a loving moment. Star Trek: Strange New Worlds continues to be a peak form Star Trek, but a beacon brightly displaying what brilliant storytelling looks like.