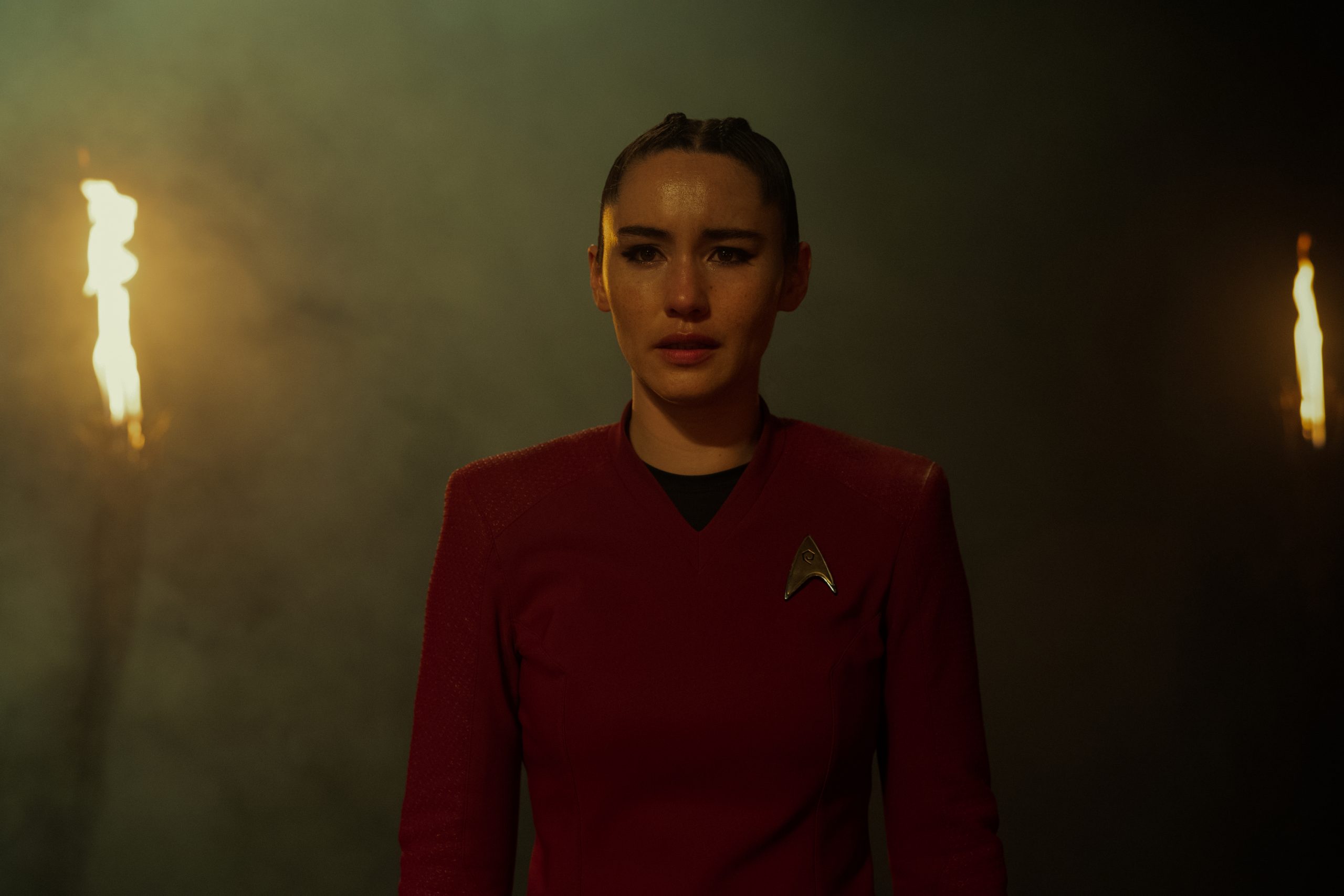 It’s the Gorn. That’s right, the Gorn are back. Star Trek: Strange New Worlds has been a wonderful ride of retro fused with brand-new, and it doesn’t stop with Episode 4: Memento Mori.

In what is by far the most action packed episode yet, the Enterprise is fighting for its life against a classic Trek villain. The Gorn were first introduced in The Original Series in a fashion this episode harkens back to. Luring the Enterprise into a trap they prey on Starfleet’s good nature. A villain like the Gorn is tantalizing for a showrunner to introduce. They are ruthlessly evil and sparingly used in Star Trek’s history. The mystique and fear inspired awe that surrounds them in the fan base is exciting to tap into. Due to canonical reasons, it can be tricky, but it’s done to perfection here in yet another fantastic episode.

Each episode of Strange New Worlds has followed a similar character showcase format. Episode 1 belonged largely to Captain Pike (Anson Mount), Episode 2 to Cadet Uhura (Celia Rose Gooding), Episode 3 to Commander Una (Rebecca Romijn), and this episode can certainly be labeled as La’an’s episode. La’an Noonien-Singh (Christina Chong) is one of the few alive who have seen the Gorn and survived. Prior to her time in Starfleet her family was attacked and taken prisoner by the Gorn. She was the lone survivor. The trauma of this ordeal, plus her battle in reconciling with it and growing from it, is as raw and authentic as it gets, and Chong portrays it perfectly. It is La’an who discovers the Enterprise had been lured into a trap, and her expertise is called upon immediately. 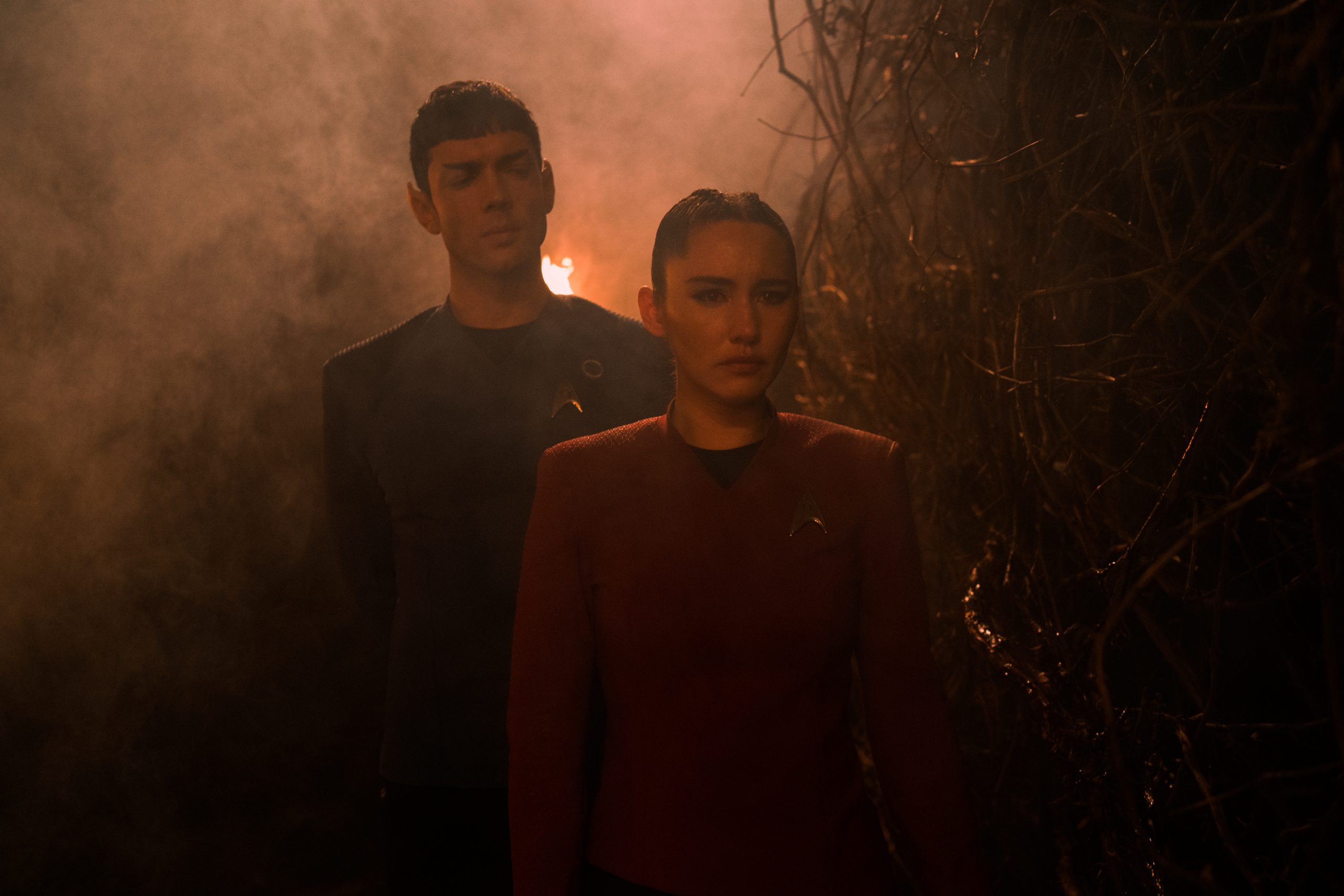 The Gorn lured the Enterprise into a tarp, and they paid dearly. This episode saw the lives of several crew members taken by the Gorn, and each one wracks a heavy toll on the Captain and the rest of the crew. For this is not just any other day in Starfleet. This day was always Remembrance Day; a time to reflect on those who have made the ultimate sacrifice for galactic peace. The irony is that it was on this day the Gorn decided to strike. After the initial enemy attack the crew flees into a decaying brown dwarf that is being destroyed by a black hole. Sometimes to escape the boogeyman you must take drastic measures, and this one was certainly the highest level of drastic.

In a meeting with commanding officers Pike sits down with Spock (Ethan Peck), Erica Ortegas (Melissa Navia), and La’an. La’an’s utter hatred of the Gorn shreds through your screen. Her anger is strong yes, but it’s the fear and loss you hear in her voice that percolates the air in the Captain’s ready room. Pike is the ultimate optimist, and his dignity and willingness to see the good in everyone is tested at this moment. In his heart he wants to believe this ruthless foe can be reasoned with someday, but he knows here in this moment they must be dealt with as nothing more than a deadly enemy. Encouraging his officers to get creative and show they are the best in Starfleet, he prods La’an to try and give her fellow officers some hope.

The Enterprise is pressed for time, as the atmospheric pressure from the dwarf and engulfing black hole will crush the ship at any given moment. In order to gain whereabouts on the enemy Gorn ships, Pike sends Spock and La’an out in a shuttle craft to survey the enemy. While most of the focus is on the bridge crew throughout this episode, there are two powerful side plots unfolding. Number One is rapidly losing blood after being injured during the first Gorn attack, and Nurse Chapel (Jess Bush) and Dr. M’Benga (Babs Olusanmokun) are overrun in sickbay. With all operating systems down, they have to use “archaeological medicine” in the meantime to save her. In engineering, Uhura is training with Chief Engineer Hemmer (Bruce Horak), who is getting just a wee bit more than he bargained for in the teaching department. Having broken his hand during the attack he must instruct Uhura on how to stop a power overload that will destroy the ship. Hemmer’s dry sense of humor meshes perfectly with the energetic Uhura’s as the two save the ship in their own way. 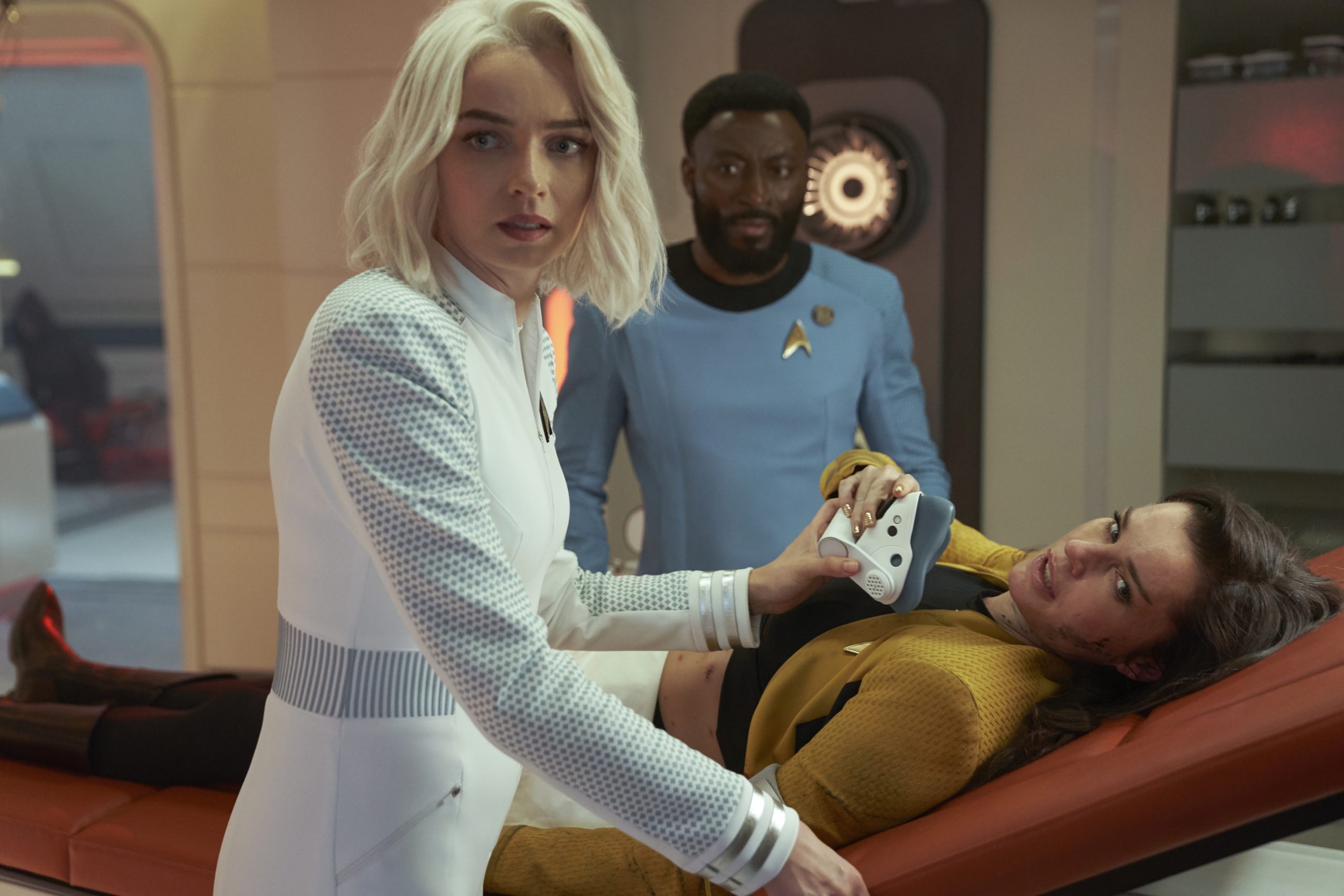 In the meantime, the away mission with Spock and La’an provided excellent results. Through a mind meld, Spock was able to help La’an channel her trauma repressed memories. She has been haunted by a smiling image of her brother throughout the episode, and this memory takes her back to the last time she sees him. In that moment, he also gave her the key to learning how the Gorn communicate. This mind meld was a two way street, however. It allowed La’an a glimpse into Spock’s sorrow. La’an losing her brother was a direct trigger to the pain of Spock losing his sister, Michael Burnham. The two share a tense moment before using their newfound information to deceive the Gorn.

With just one Gorn ship left and limited time, it’s time to get wild. In a desperate move Pike wants to take the Enterprise deeper into the black hole, vent the main cargo hold and other decks and ride the shock wave of that explosion to safety all while deceiving the Gorn into thinking the Enterprise has been destroyed. You know when a show is brilliant when it has you holding your pillow terrified for the crew’s safety when you know they ship has to survive. In what is now going to be called “The Pike Maneuver” the Enterprise safely makes it out alive, and the plan to deceive the Gorn worked splendidly.

Before I conclude, there are two characters I want to specifically highlight in this episode. First and foremost is La’an; Christina Chong absolutely nails her moment in the spotlight. This episode in many ways is all about her, and she delivers a performance worthy of the moment she is thrust in. We not only see her processing her grief, but we feel it along with her. It’s a tremendous episode for her. Second, is Lt. Ortegas. Ortegas is the current front-runner for my favorite new character right now. Her spunk steals the show for me every time, and the looks she gives Pike throughout this episode are hilarious. Melissa Navia gets nothing but a standing ovation from me.

The cast of Star Trek: Strange New Worlds is, and please forgive me for this, simply out of this world. The chemistry from the get-go is seemingly effortless, and how the way each of them channel their character is exemplary. We are just four episodes into this new show and this crew has formed an eternal bond with my heart. I can’t express how much I truly love this show.

Look forward to our review of episode 5.