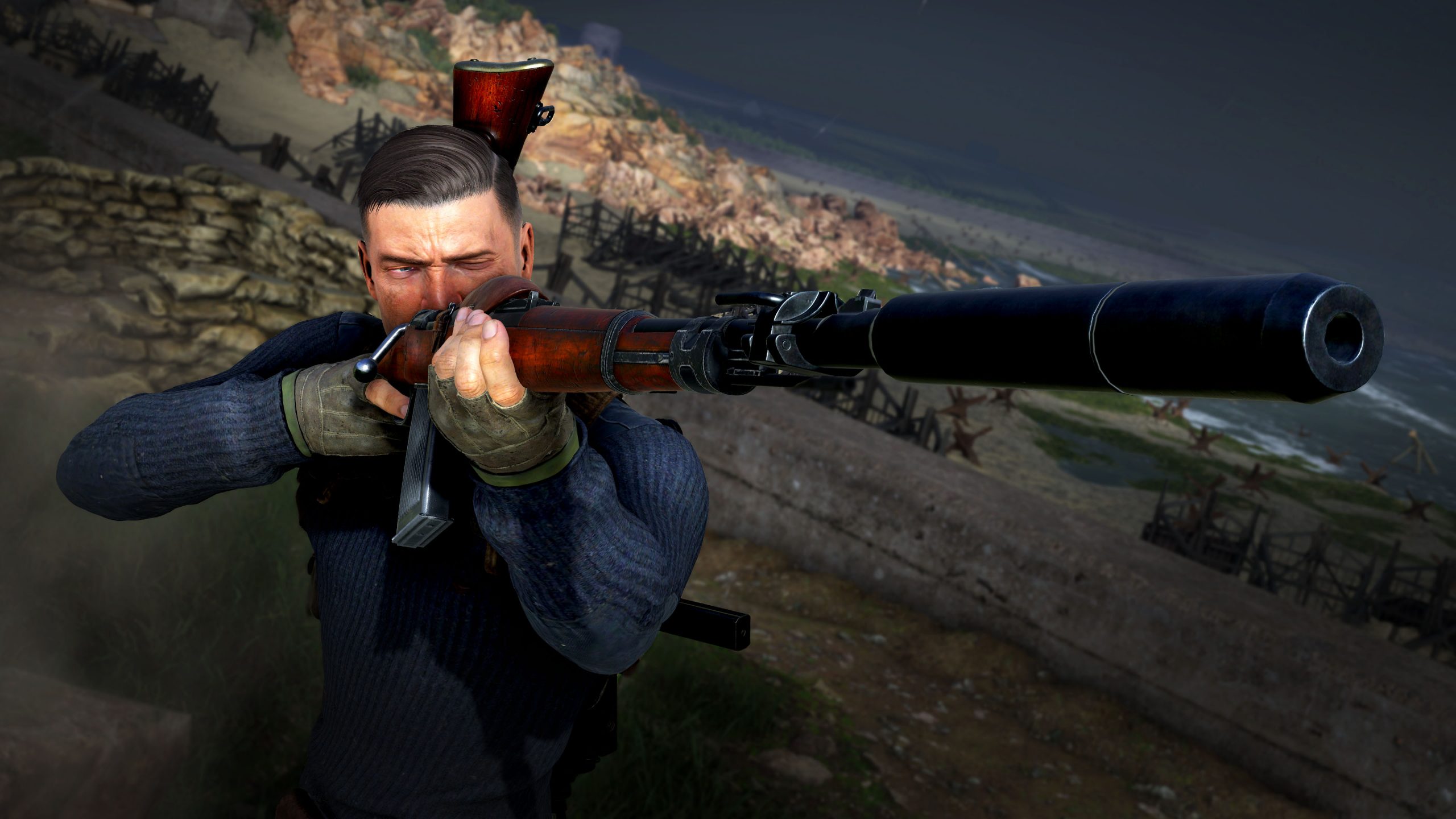 Sniper Elite 5 feels very familiar, but also takes everything to the next level and is jam-packed with content.

In the first non-Zombie Army release of the Sniper Elite franchise since 2017, publisher/developer Rebellion has homed in on what makes these games exciting, offering a bigger and deeper WWII playground expertly designed to support hours of Nazi-hunting fun. While the series’ core philosophy might feel stagnant at times, and so do some technical aspects of the game, Sniper Elite 5 does exactly what it says on the cover, and is a completely BS-free modern shooter experience.

The story once again follows Allied sniper Karl Fairburne, a clear-cut and stoic war hero with a dark past. For those new to the franchise, Sniper Elite V2 (2012) rebooted the storyline after the rather modest original game, which took place around the end of WWII. Still, the second installment also focused on the siege of Berlin in 1945, so its sequels have actually been prequels in order to take advantage of more theaters of war. This time around, Fairburne is tasked with uncovering the Nazis’ Operation Kraken project in France, closely working with the French Resistance as the Allied troops storm the coasts of the country and try to push back the Germans. 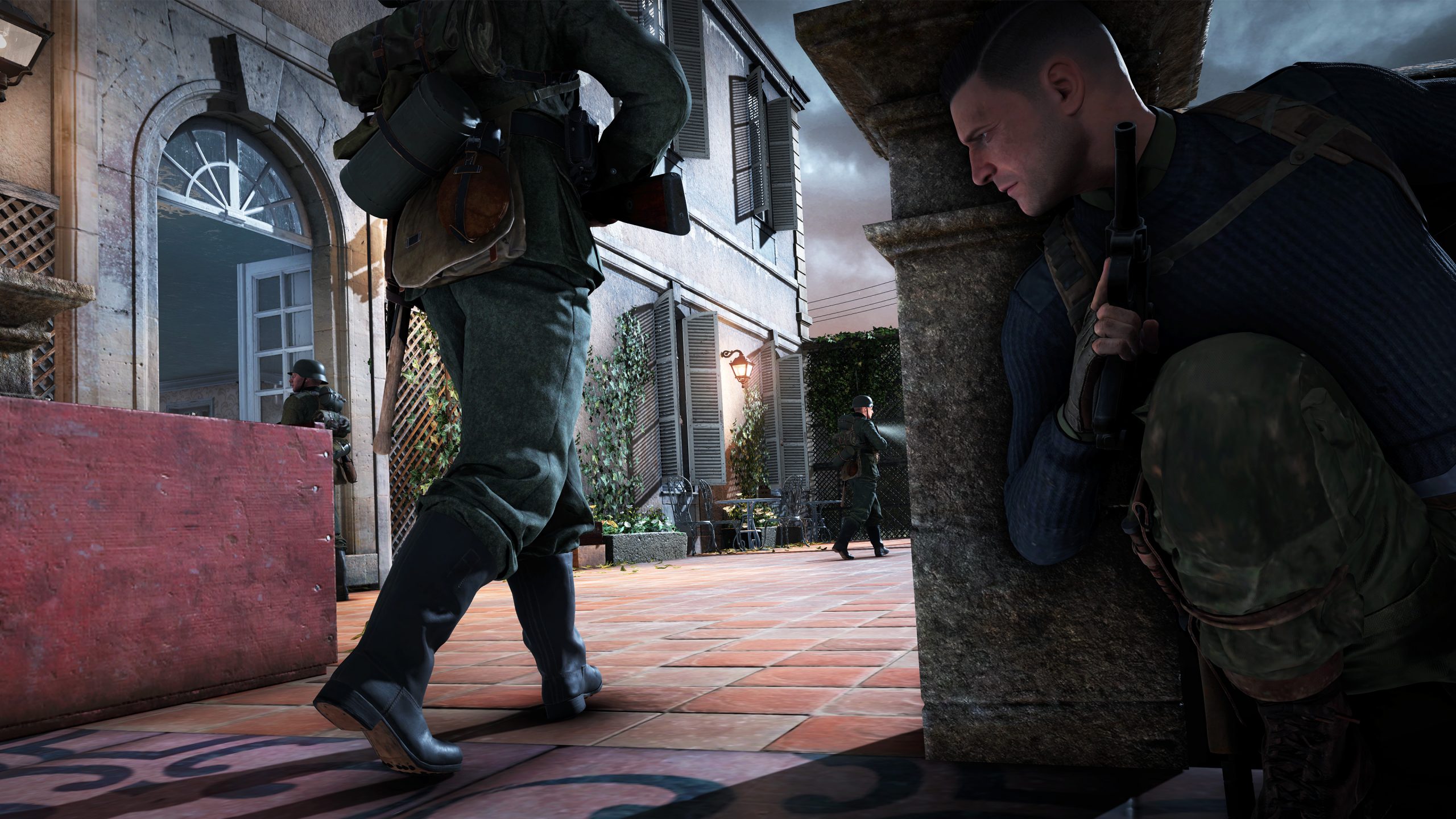 Past Sniper Elite games weren’t too concerned with their characters or the human drama of war, instead embracing WWII pulp serial vibes that felt pretty much perfect for the kind of game they aimed to be. That hasn’t changed here. The premise is simple: Nazis are bad, you’re on your own (mostly), and it’s time to scare the Big Guy. It works like a charm every time, and the saga has gracefully jumped from one European setting to the next to keep things visually fresh, and to slowly turn Karl into a legend for the Allies and a Boogeyman for the Nazis. As fragile as the main character is inside the game (you should avoid shootouts as much as possible), it’s refreshing to see the bad guys acting scared from the get-go.

The logical progression of the series has also turned levels into big sandboxes that feel more Hitman-y than ever. There’s a story to follow, sure, with cutscenes and all, but maps rarely function as wide corridors or large areas connected through narrow paths. It’s all about choice, not only when it comes to the moment-to-moment action, but also regarding traversal. There’s a parkour/climb system that adds some flexibility to Karl’s movement and a sense of verticality to the levels, but it’s easily the weakest link in the otherwise robust stealth-oriented action gameplay. 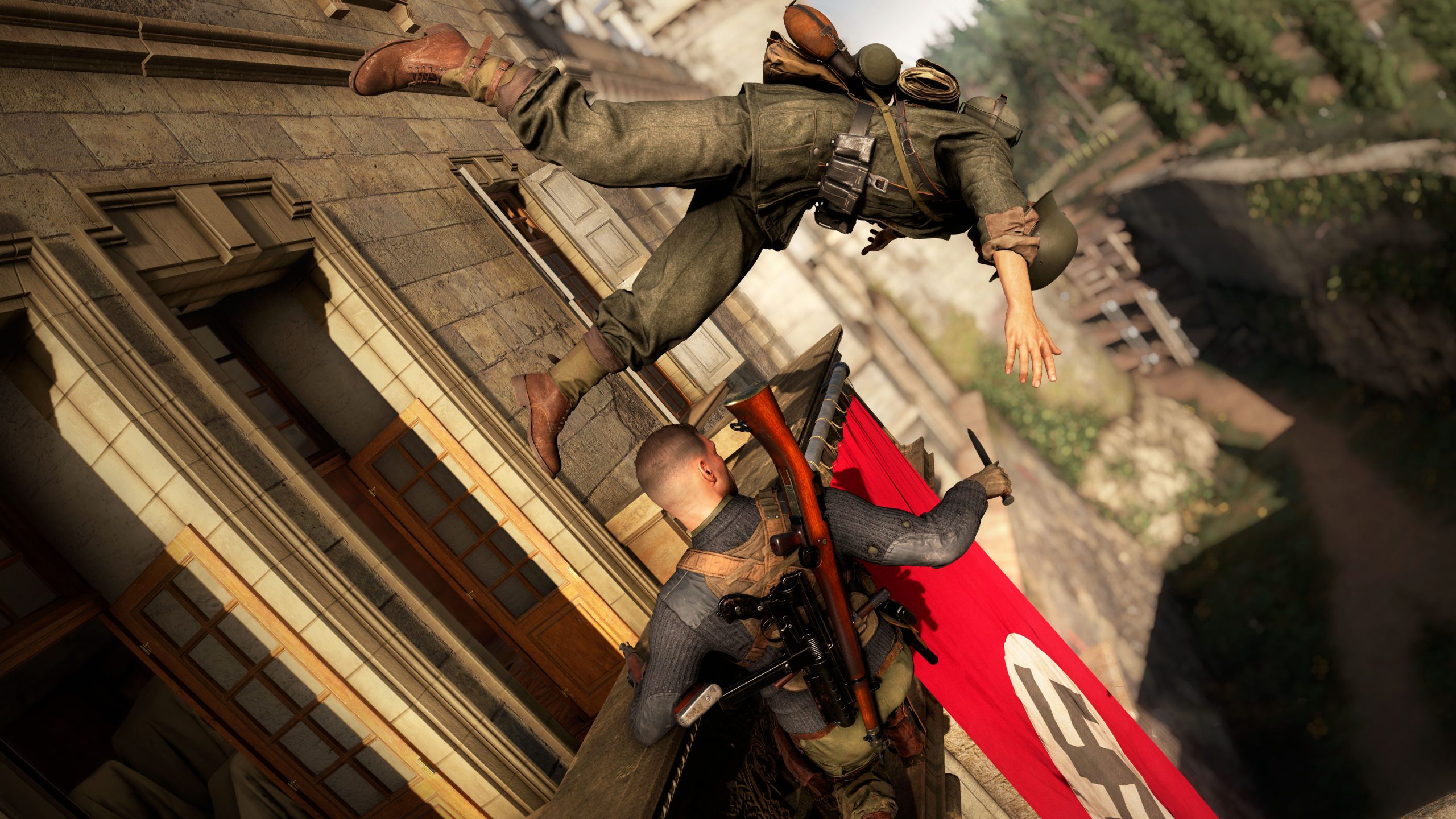 Almost every action inside a mission rewards the player with XP that keeps progression going and makes re-runs with different loadouts and skill builds very enticing. And much like in recent Hitman games, players are rewarded when they experiment through plenty of in-game challenges, plus secondary objectives (to kill, sabotage, recover…) can substantially elongate the time spent in each level of the eight which make up the campaign — a ninth (pre-order exclusive) mission tasks you with killing Adolf Hitler himself… again.

The renewed focus on close-quarters combat may not please everyone though. As I previously mentioned, Karl is no BJ Blazkowicz, and direct confrontation should be avoided, but sometimes it’s almost inevitable. The scenarios might be expansive, but you’re often stuck inside interiors, infiltrating inside Nazi-filled strongholds which turn missions into pretty much a lite version of Metal Gear games. There are plenty of tools, actions, and items at your disposal for such encounters (or to minimize them), but movement feels too clunky at times to smoothly navigate through maze-like buildings as The Shadow, and some third-to-first-person oddities (as in… Karl suddenly facing the floor or the sky) crop up at the worst possible times. Some of these rough edges can be improved through patches, but Sniper Elite 5 certainly wasn’t built for prolonged indoor sections and chaotic gunfights. 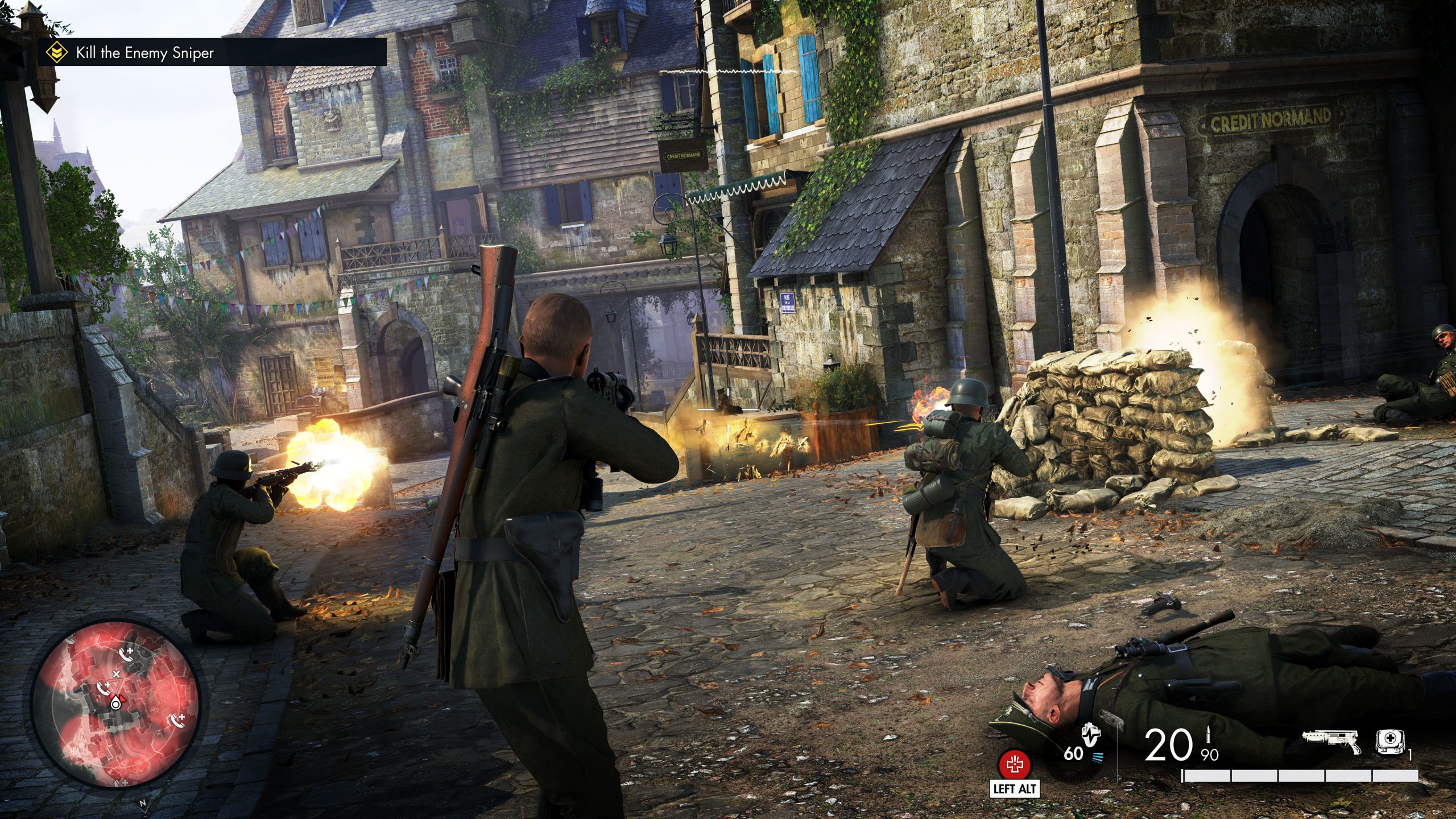 The AI is quite ruthless, too. Stealth and detection are determined by lines of sight, the level of noise, the lighting of the scenery, and whatever clues/bodies/traps you leave lying around. It all sounds fairly standard, but NPCs are way more eagle-eyed than in other games, and they don’t give up easily once they start to chase you. I love this part of the Sniper Elite experience, as many other stealth games can easily be exploited, but the strategic positioning of German forces, abundant patrols, and their level of awareness make for several amazingly tense moments per mission.

The best thing about Sniper Elite 5 is that beating the campaign as a lone wolf… is only the tip of the iceberg. Online co-op for the entire story is also a thing and can be accessed from the very beginning, with unlockable characters as the cherry on top. Another co-op experience that feels like a must is Survival mode, which is a wave-based offering that does exactly what you’d expect. Moreover, competitive multiplayer amps up the action with several modes and a couple of very interesting twists on TDM.

And finally, there’s an Invasion mode that essentially brings some of that sweet Dark Souls DNA into Sniper Elite — as a German sniper, you must hunt down folks playing through the campaign, and can work alongside the AI to complete your mission. This final mode is thrilling and really makes the core open-ended structure shine; I expect many hilarious clips to appear online in the coming days. If you’re not okay with the idea of being invaded in the middle of a single-player mission, you can turn the option off.

As a final note regarding the multiple modes: the main campaign and Survival share progression, while Invasion and the competitive multiplayer slice are on their own road and exhibit some key differences, especially when it comes to player skills. 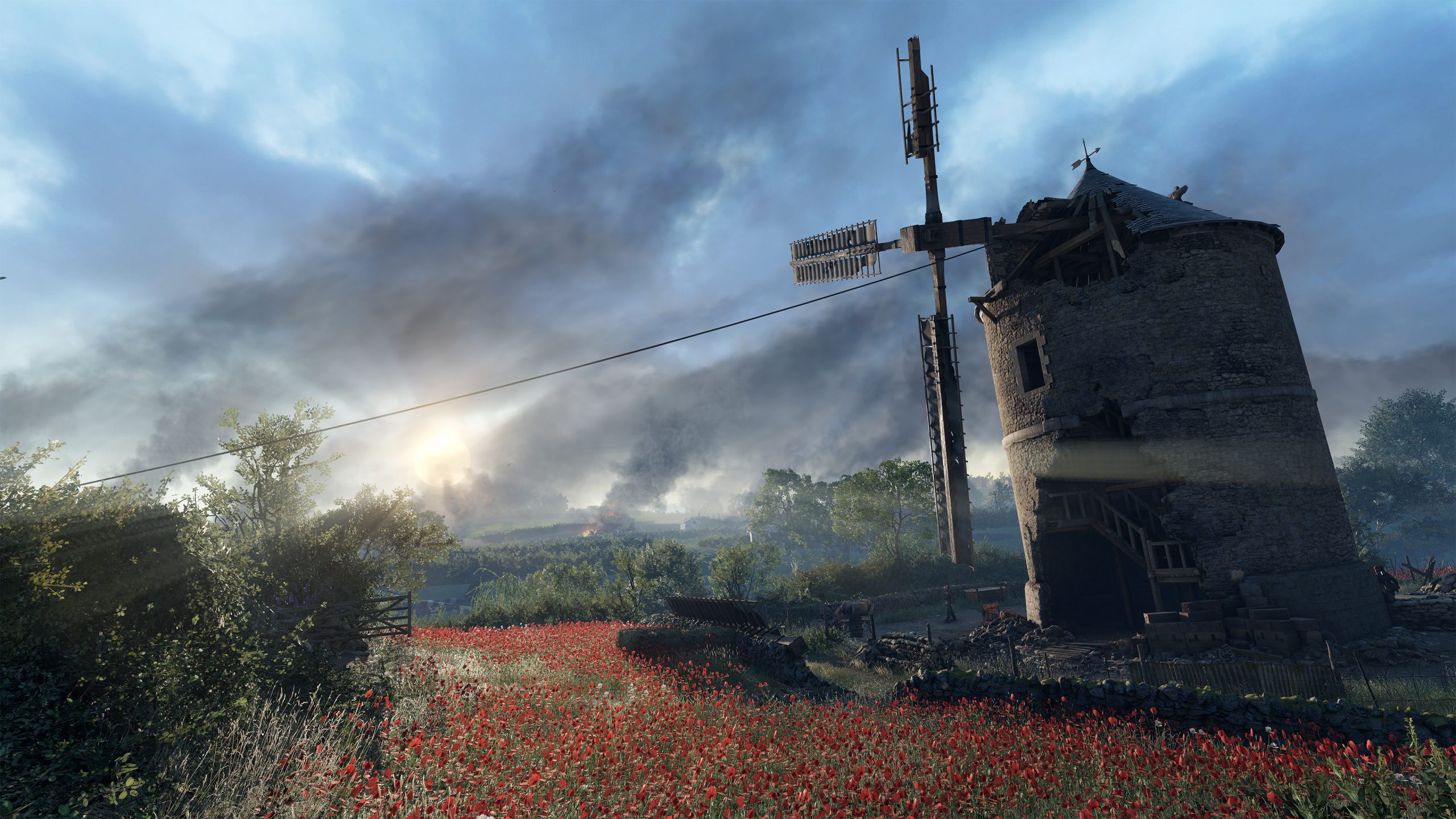 So far, online play has been robust across all modes, and cross-play constantly matches me (PS5) with PC and Xbox players without any hiccups. However, I’ve suffered one big crash at the end of a competitive match that completely locked the console and forced me to hard reboot. Otherwise, it’s been smooth sailing on Sony’s console, with crisp graphics hitting a resolution as high as 4K without dropping below 60 FPS (no graphical modes are offered). Mind you, Sniper Elite 5 is a cross-gen title, so the technological leap on display here isn’t as big as it could’ve been. While it looks snazzy as a whole, some of the character models and particle effects feel quite dated during cutscenes, with some stiff animations also bringing the overall presentation down. It’s got that unmistakable “Rebellion jank” to it, I’d say. X-ray kill cams look fantastic and are gorier than ever though.

Unsurprisingly, the devs have taken advantage of the DualSense’s unique capabilities to add trigger effects and more precise vibration to the PS5 version of the game, something I very much welcome — so far, not many third-party studios have bothered with this key aspect of Sony’s new-gen machine, and it’s a great addition for action-heavy games. Spatial audio (through the console’s own software) sounds fantastic as well, and it’s incredibly useful at times.

While I’ve yet to experience everything Sniper Elite 5 has to offer (which is quite a lot), I can safely say this fifth installment, in spite of some dated elements and the lack of big creative swings, is a pleasant surprise and a remarkable step forward to bring the franchise into the mainstream and out of its cult status. The May 26 launch date also seems sensible, plus it’s available on Game Pass, which should bring tons of attention to it. If you’re into shooting up some Nazis, this one should be a treat.

Thanks to Rebellion and Tinsley PR for the PS5 review code.