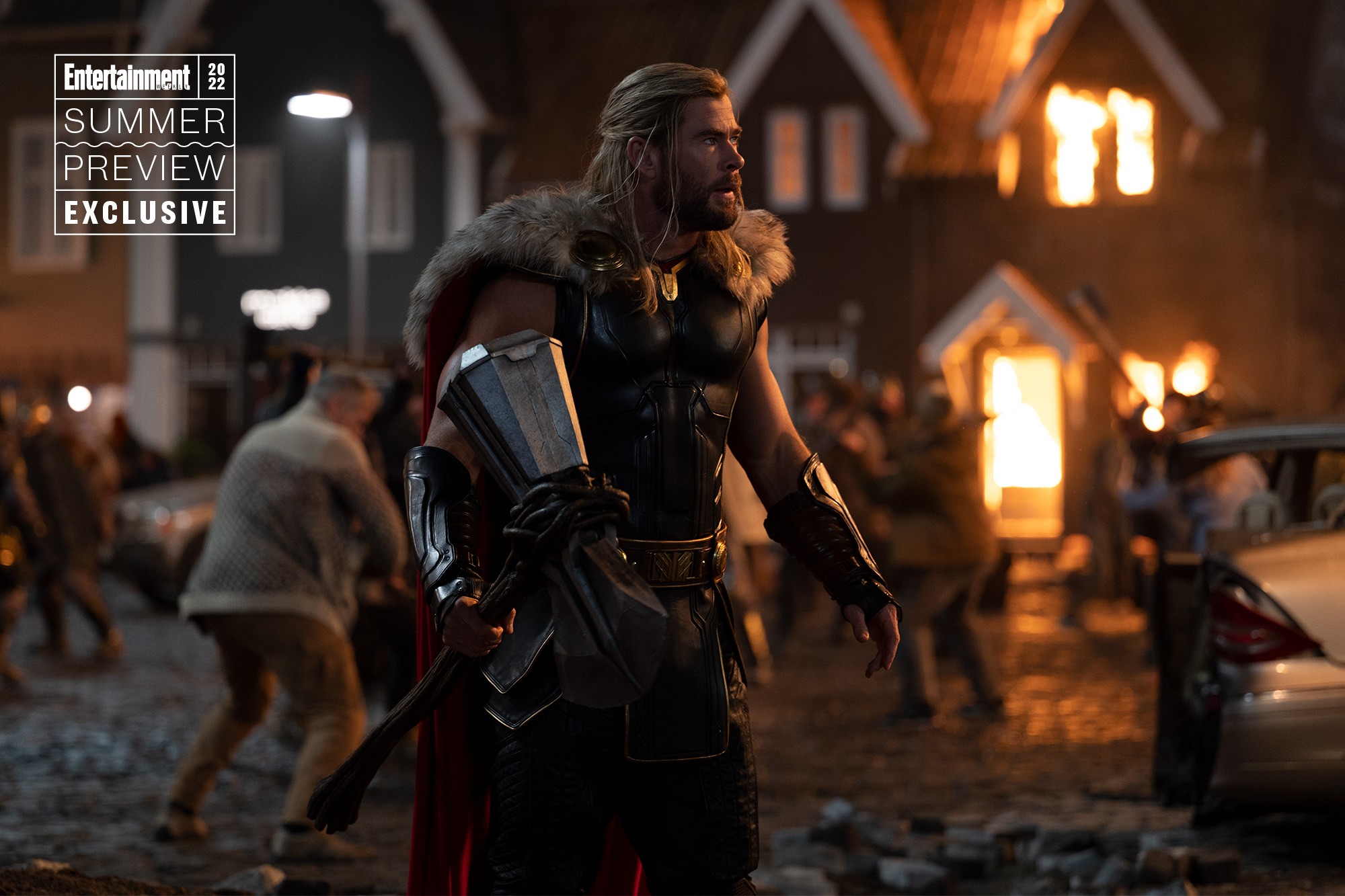 It seems hard to believe, but we are now less than two months away from the release of Thor: Love and Thunder.

Taika Waititi’s new cosmic adventure led by the God of Thunder will bow in theaters on July 8, a prime spot at the summer box office. As part of the lead up to the film, Entertainment Weekly spotlighted the movie in their 2022 Summer Preview, and had the chance to sit down with the co-writer/director of the film. They also posted a new picture from the fourquel (see above).

Waititi helmed the previous Thor entry, Ragnarok, which electrified audiences worldwide back in 2017. Following the tremendous critical and box office success of that film, Marvel Studios signed him for another movie, which was announced to be Love and Thunder back in 2019. Waititi’s intention, however, was to make something completely different from Ragnarok, as he explained:

“What I didn’t want to do is just make Ragnarok again, because that’s been done. I needed to do something more interesting for myself to keep the whole thing ignited and to make sure that I’m feeling creatively stimulated. I thought, What’s the least expected thing with this franchise?”

He went on to explain some of the key differences between both films, going so far as saying that Love and Thunder will be a slightly deeper story than Ragnarok:

“‘Ragnarok’ felt a bit like a party. It was quite festive. This one is still fun, and it’s got moments of being over the top, but thematically, it’s about something a bit deeper than the last film. It’s not a serious film, and it’s not a drama, but we do deal with ideas that I think a lot of humans deal with — universal themes about love and loss and our place in the world. Everyone sort of asks this question in the film: What is your purpose? What is the reason that you’re a hero, and what do you do when you have these powers?”

Thor: Ragnarok is indeed one of the most entertaining and rewatchable movies in the MCU, but at its core, it’s a really traumatic story for Thor. At the time of its release, it could be argued it was the darkest movie Marvel Studios had done despite its many comedic touches. After all, the protagonist lost his father, saw his hammer be destroyed like glass at the hands of her long-lost sister, lost an eye to her, and had to voluntarily sacrifice his homeworld to save his people. Apparently, Love and Thunder will be an even more challenging journey for Thor, as Taika explained:

“It’s sort of like a midlife crisis film, really. That’s the question we ask everyone: Are we doing the right thing, and are we doing all we can in the world? I think right now, while the world is still healing from this pandemic, it’s a good question to ask. It’s like, well, are we doing enough to look after each other and to look after ourselves?”

The movie will also bring back Valkyrie, played by Tessa Thompson, a character Waititi introduced in Ragnarok and who was crowned King of Asgard in Avengers: Endgame. The director said the following about where the character is at, at the beginning of the movie:

“She’s got to do all the things that they never tell you about when you’re supposed to rule the people, which is deal with all of the infrastructure and figure out the economy and have delegates visit from other countries. So, she’s spending a lot of her time not fighting, and all of her new battles have to do with ruling her people.”

The movie will also introduce Christian Bale as Gorr the God Butcher, who, according to the director, will be regarded as one of the best Marvel villains:

“I think personally, he’s probably one of the best villains that’s Marvel’s had in their films. He’s very layered.”

Love and Thunder is also featuring Russell Crowe as Zeus, as we learned last year during production. But this was something very spontaneous, as Waititi explained:

“I consider Russell a friend, and I forget that there are some friends I have who are really incredible at what they do. When I was on set with Russell, I was like, ‘Oh shit, that’s right! You’re Russell Crowe! You’re a really amazing actor!'”

Crowe’s part will admittedly be rather small in the movie, and online speculation has him as one of the first victims of Gorr in the movie; he may use Zeus’ murder as a showcase of his powers. We might learn more sooner rather than later, when the full trailer for Love and Thunder finally shows us Christian Bale’s Gorr the God Butcher in full swing.

Thor: Love and Thunder will debut exclusively in theaters on July 8, 2022.