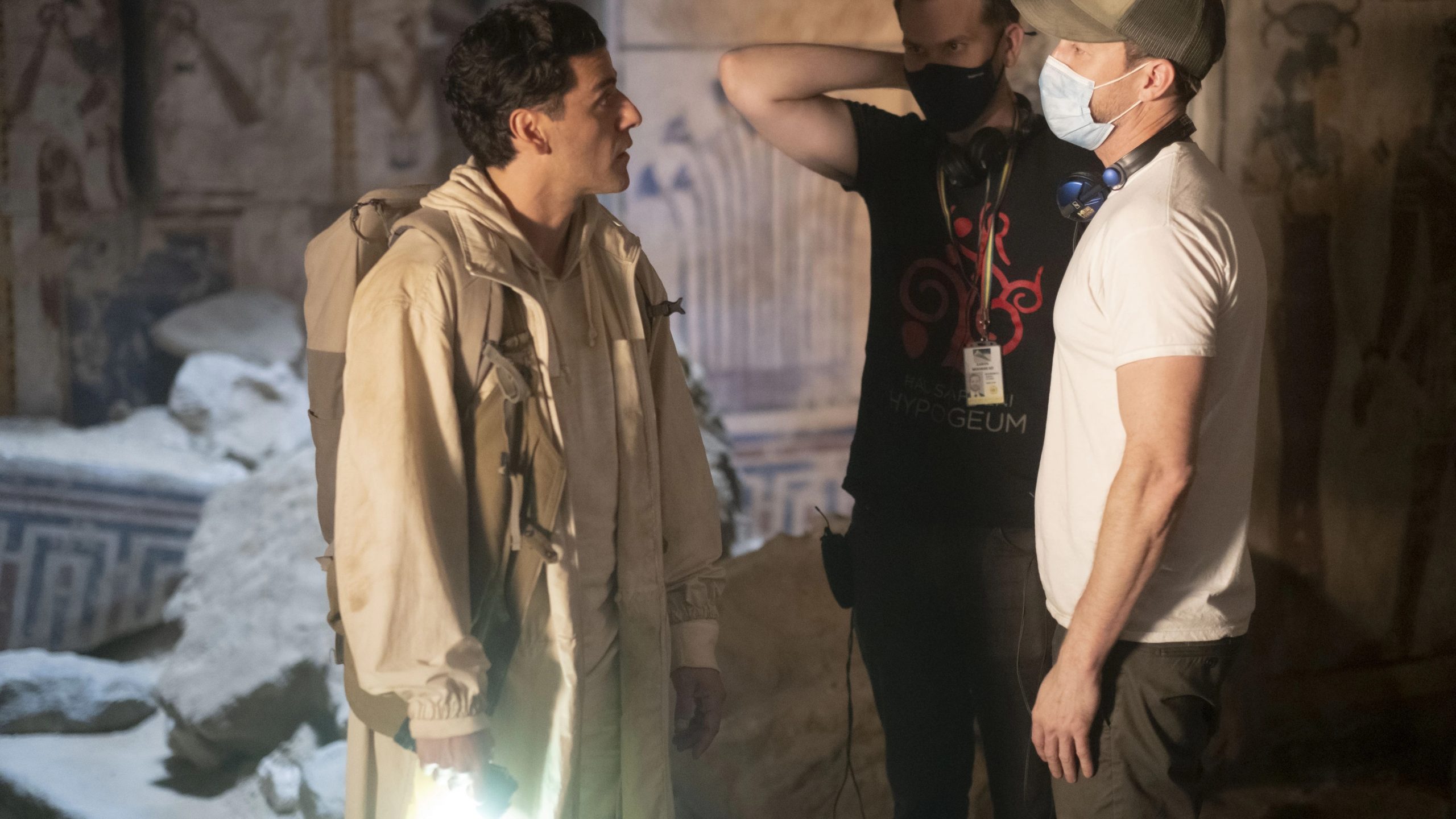 Moon Knight episode 4 is already out, and directors Justin Benson and Aaron Moorhead had a chat with Entertainment Weekly in which they broke down in detail everything that went down in the fourth episode, titled The Tomb.

Moorhead revealed that the inspiration for the ending of episode 4 came from a comic run by Jeff Lemire and Greg Smallwood:

“The end of episode 4 is actually a gift of the script. It came from wanting to do the least expected thing and completely disorient the audience, while also being completely true to the character that we’ve built over four episodes. Also the comic book character: There’s a run of Moon Knight written by Jeff Lemire, and [Greg] Smallwood did the art, and it has a lot of similar feelings and visuals to what happens at the end of episode 4. So we’re really glad to be able to honor the original comics, the ones that we were the most drawn to when we were trying to crack Moon Knight. That’s where the inspiration came from, especially visually and tonally.”

Moorhead also discussed how it was Oscar Isaac who took the lead in the scenes, and the directors were just capturing on camera what he was doing:

“A lot of what we do is chasing what Oscar is doing. We feel like the show is at its absolute best whenever we’re marrying what we’re doing to honoring what Oscar’s doing. I think that’s pretty clear to anyone that watches ‘Moon Knight’. We’ve talked about this scene feeling like it’s underwater, not just because he’s been sedated, but because the entire audience has just been subjected to an entire worldview shift of what this show is. Why is there a weird ‘Indiana Jones’ knockoff movie right in the middle of ‘Moon Knight’?”

He then added the following:

“Not to completely spoil the Lemire run, but at the very end there’s this image that completely lit our hair on fire when we first read it. It’s Marc Spector hugging himself, and he says, ‘Goodbye, Marc.’ It’s as he’s achieving integration and understanding who he is. Now, we’re not at the end of our story here, but we just felt like there’s this antagonism between [Steven and Marc], and they’re starting to learn to work together and gain some mutual respect. So when they first see each other in person, they would instinctually just embrace. That was something we were really leading towards with all the other episodes. We wanted to earn that moment.” 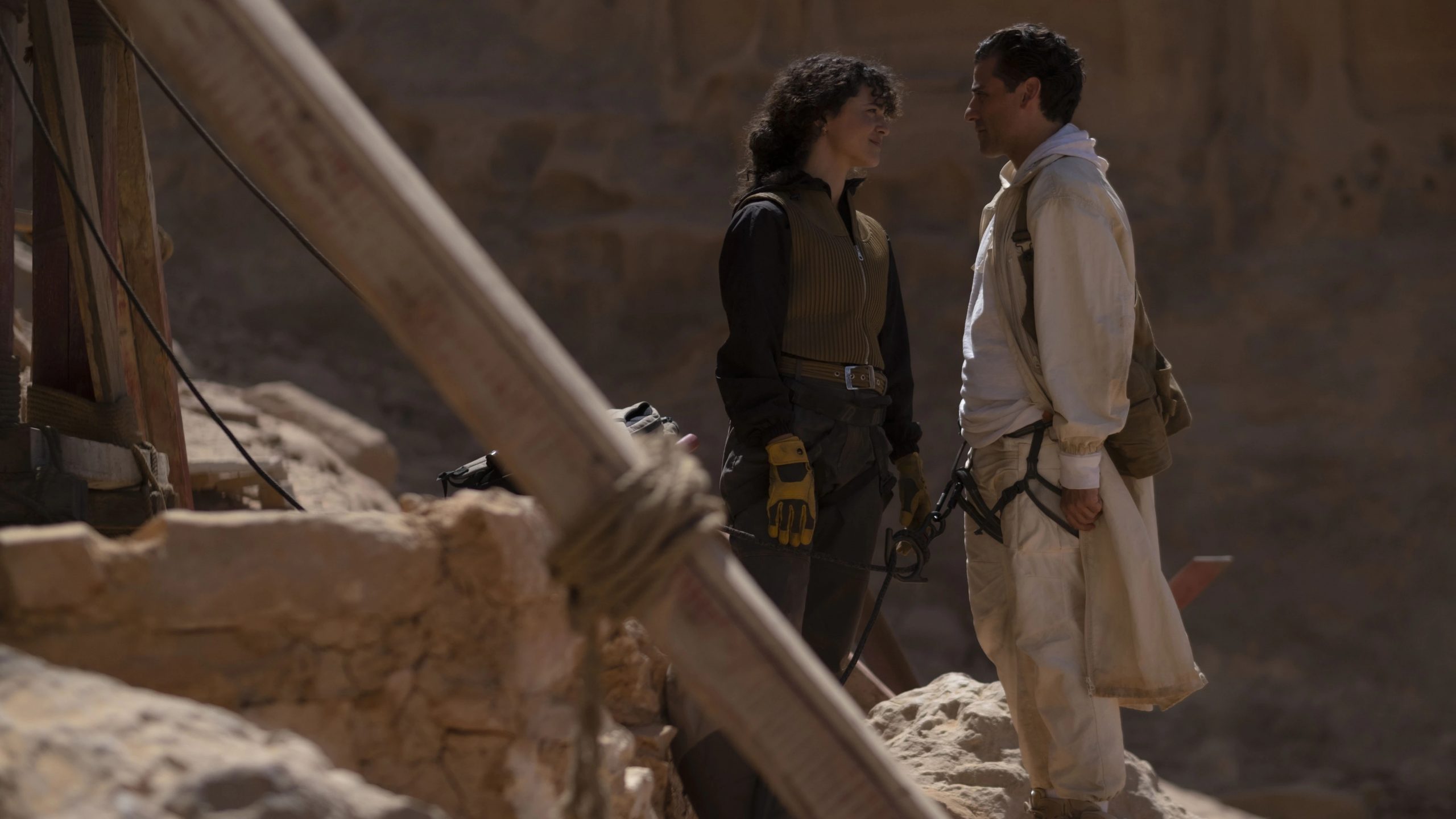 “I remember in the preparation of that scene, Ethan would talk about how he was feeling inspired by Carl Jung — by some of the most famous photographs of him and the pop culture interpretation of who he is, if nothing else. We remember showing up to set and suddenly seeing Ethan in that mustache, with that hair, wearing the glasses, and I just thought what a wild transformation that was from Harrow.

The energy to his acting in that role was impressive — to the point of being exhausting to watch. [Laughs] Watching him do that scene over and over and over with such precision was a very special thing to get to witness.”

Moorhead added the following about how that scene changed while filming, as Oscar Isaac and Ethan Hawke completely embodied their roles and tossed the script out the window:

“He has 99 percent of the dialogue in that scene, and we shot his coverage first on that day. What’s funny is we assumed that because he is doing all the talking, that scene would just kind of be about him, with a few cutaways back to Marc. But once we turned it around on Oscar and saw what he was giving us and figuring out his eyelines, we realized how active it was. There’s this wonderful take where a fly lands on his hand on accident. That’s a real fly! He chased it.

It’s funny because we assumed we were going to be cutting the whole thing around Harrow, but we completely refocused the edit in our heads to be back in Marc’s experience in that moment — because Oscar was giving us so much.” 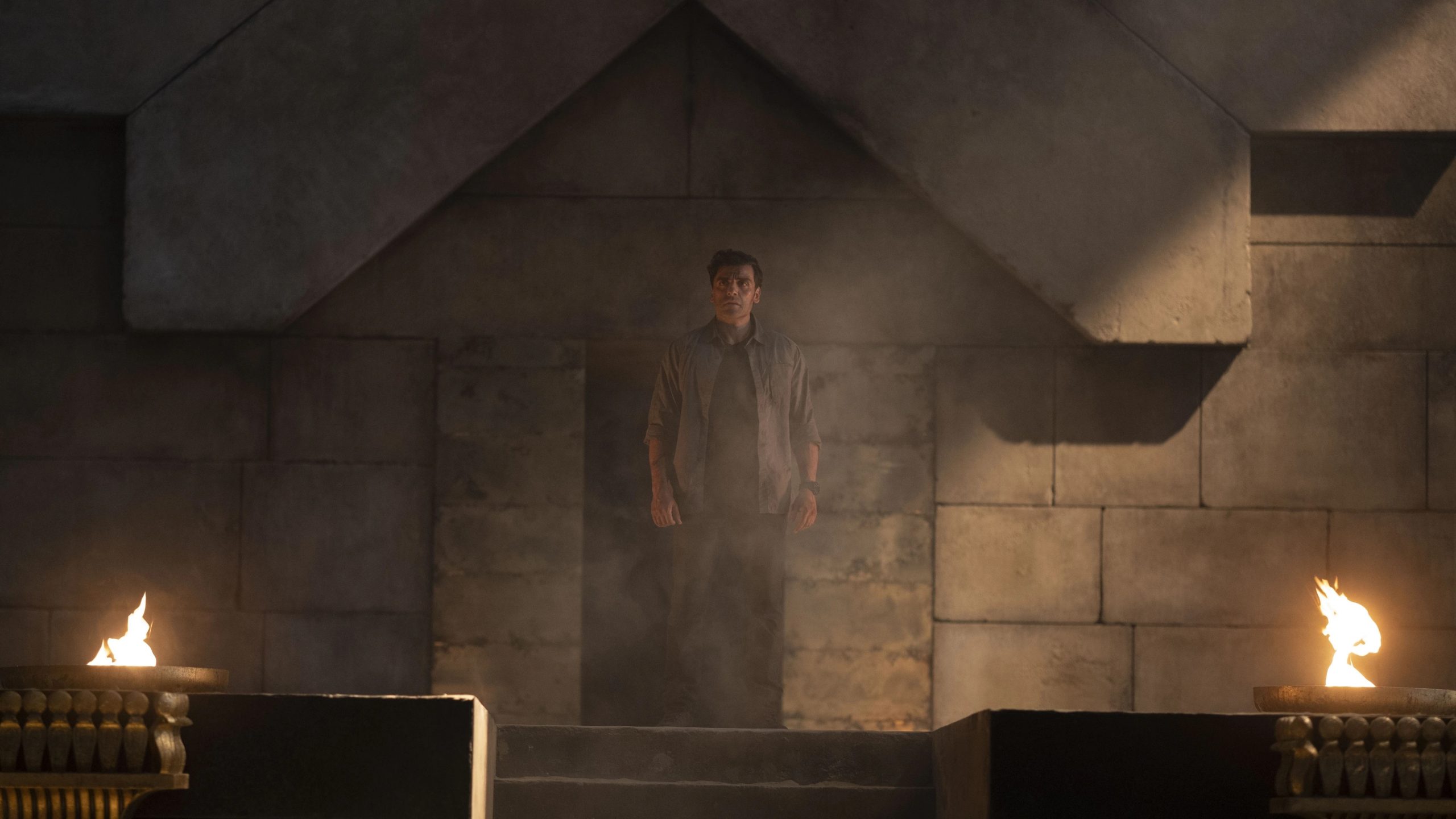 When asked about how they produced the Indiana Jones knockoff, Moorhead said:

“Production on that was really interesting because you’re working on a Marvel show with literally the greatest filmmaking technicians in the world, and now you’re asking everyone to intentionally make something that looks like it was made with toothpicks and papier-mache. That was a very interesting experience. Everyone had a lot of good laughs that morning. Everybody was just having an absolute blast, being as cheesy as we possibly could.”

The directors were then asked about the final shot of the episode, which had a giant hippo deity coming out of a door. Benson broke it down from a technical point of view:

“It’s funny. We only had one or maybe two shots with this [hippo] character. She showed up to set, of course dressed in a goofy greenscreen outfit, and we just tried about two dozen different takes on that scene. We just kind of stood off to the side, and she immediately trusted us and took the direction in stride. Even though we had met only just minutes before, and she just screamed for us every which way.

The interview with the directors ended with a massive tease of what’s to come in the next couple of episodes. Said Moorhead:

“I think if you were surprised by episode 4, get ready to be surprised again by episodes 5 and 6. I know it just sounds like a nice little tag, but I promise you that’s actually the case.”

Moon Knight will air its fifth episode on April 27 and its season finale on May 4, two days before the release of Doctor Strange in the Multiverse of Madness. Make sure to come back for our reviews of those episodes, and if you haven’t already, check out our non-spoiler discussion on the first four episodes here.