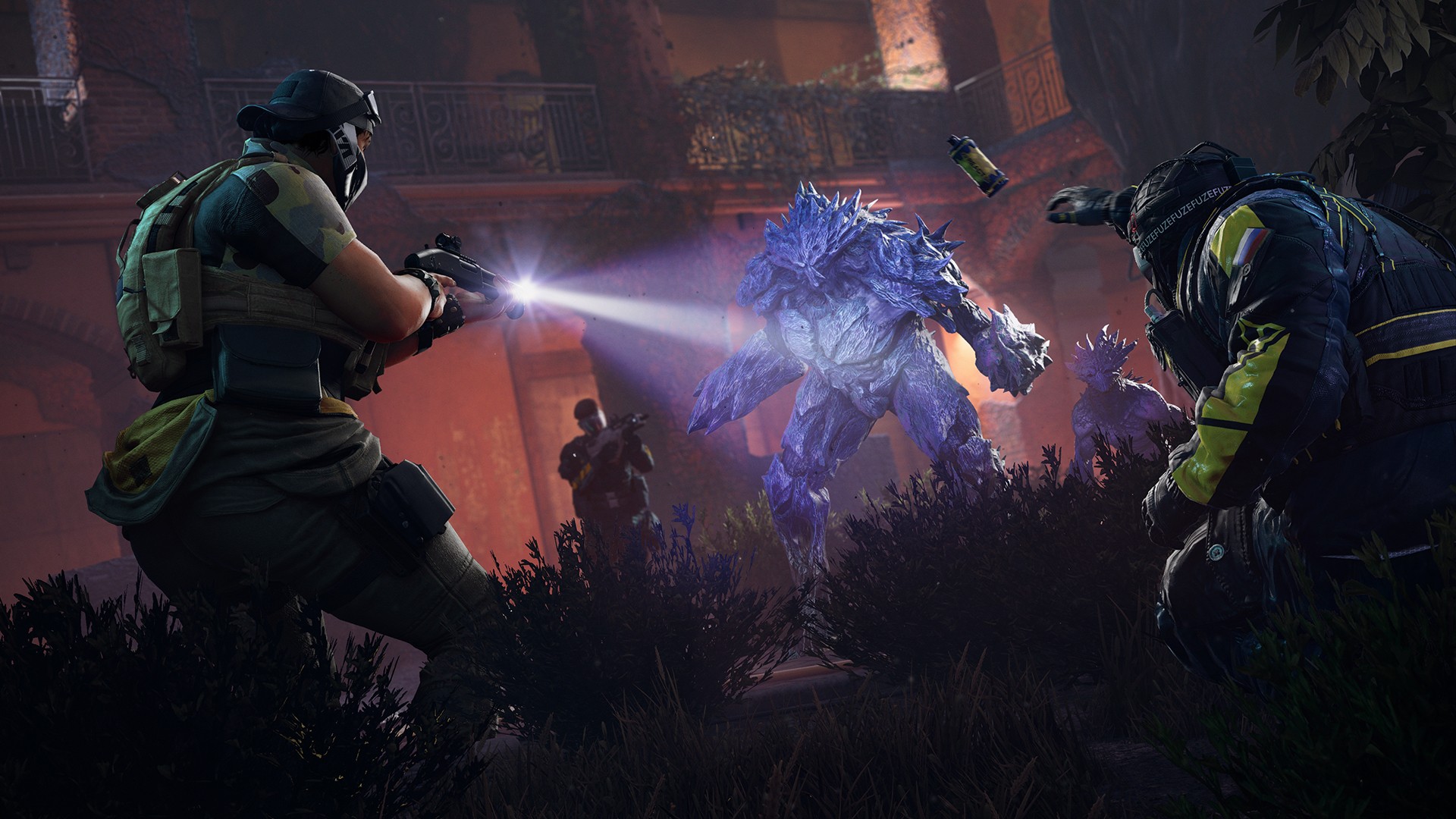 Tom Clancy’s Rainbow Six Extraction tries to translate the high-stakes action of Siege into the zombie subgenre of FPS. Does this mix actually work?

Players and game journalists alike weren’t too impressed by Extraction when it was first revealed under the title Quarantine (changed shortly after the global pandemic started). Yes, Rainbow Six Siege had already deviated from its competitive path and offered a limited-time event about shutting down an alien infestation. This was in 2018, and it appears that ‘Outbreak’ was big enough to warrant a deeper look into the idea of bringing “space zombies” into the Siege formula. Still, the FPS genre is already crowded enough with Left 4 Dead wannabes (now with Back 4 Blood as the rightful heir to the throne), so what could the Rainbow Six take on zombies bring to the table?

Marketing and release plans haven’t been especially good either. For some reason, the original strategy was to release this last fall, extremely close to Turtle Rock Studios’ Back 4 Blood, which is essentially Left 4 Dead 3. Pitting a doubtful R6 spinoff dealing with alien infected against the most-anticipated (in recent memory) big-budget co-op shooter about zombies wasn’t the best of ideas. Thankfully, Extraction‘s launch was delayed into early 2022, and its price point lowered to $39.99 (from full price), plus it’s made a day-one debut on Game Pass both on PC and consoles — all of these late-game choices have given Extraction a chance to fight back. 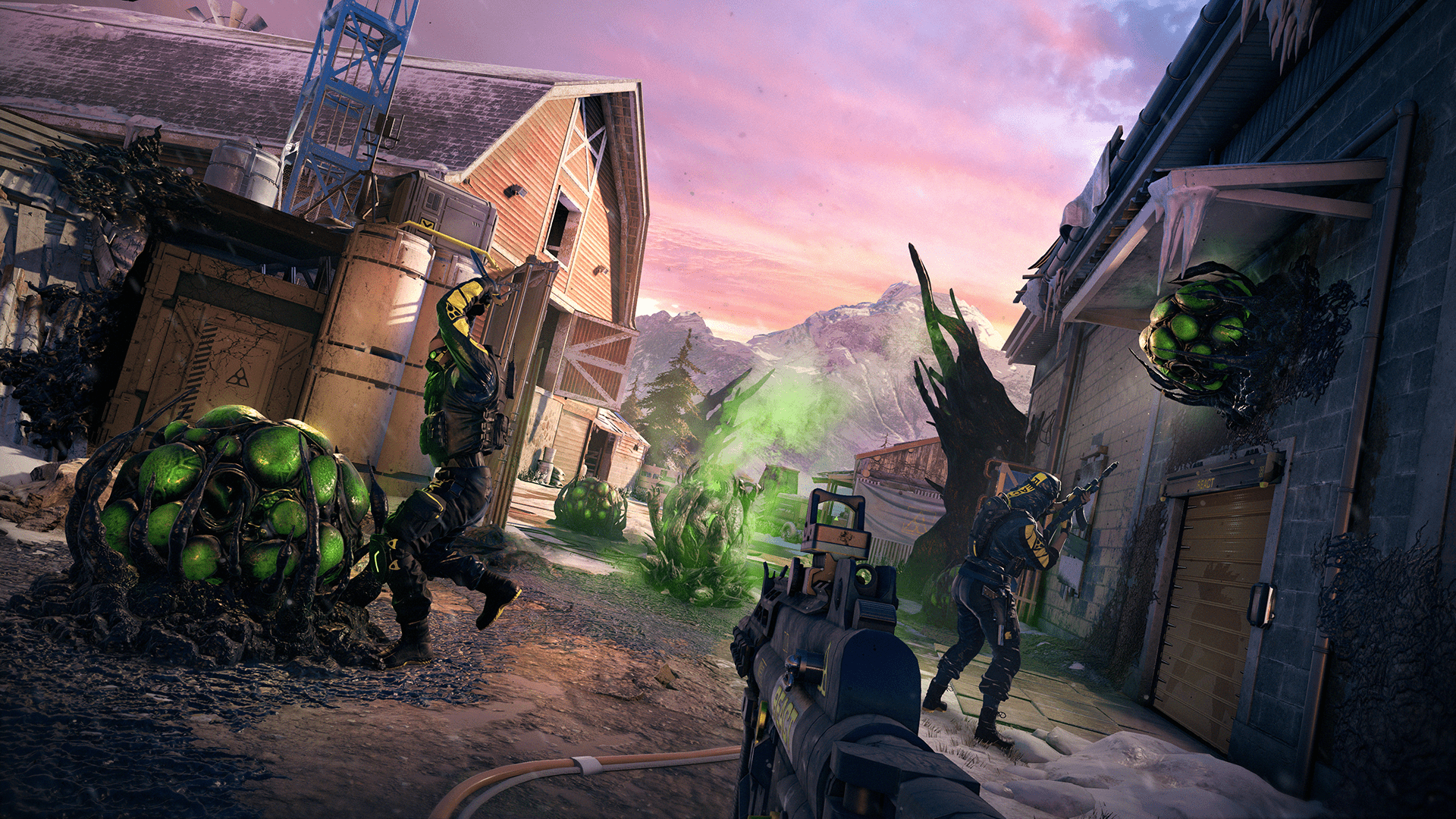 So, how’s the game? Well, it’s surprisingly good. I mean, I believe no one was expecting it to be unsalvageable, but hopes weren’t too high, since nothing in the marketing campaign suggested this was more than a quick cash grab to improve Ubisoft’s numbers until bigger releases arrived. Rainbow Six Extraction successfully manages to both make a case for its existence and push zombie shooters forward. The basics might seem familiar, but it’s an entirely different beast. One that might not be for everyone, mind you, but one worth keeping around.

The official premise reads as follows:

The Chimera parasite that caused an Outbreak in New Mexico has suddenly reappeared across the US, deadlier than ever and spreading rapidly. To prepare for any future threat, the Rainbow Exogenous Analysis & Containment Team (REACT), a highly specialized and outfitted organization was created.​ As a hand-selected REACT Operator, it is your mission to confront the mysterious creatures known as the Archæans.

Anyone familiar with Rainbow Six Siege and its ‘Outbreak’ event will instantly recognize Extraction as a direct sequel to the surprising events that introduced an alien virus and the threat of an invasion of unknown origin. While this game isn’t too concerned with telling a cohesive story, cutscenes both set up and fill the gaps between the missions (spread across a number of locations). If you’re into reading tons of “Rainbow Six meets aliens” lore for some reason, you’ll find plenty of tidbits, logs, and small tales that are unlocked as you progress through the atypical campaign. 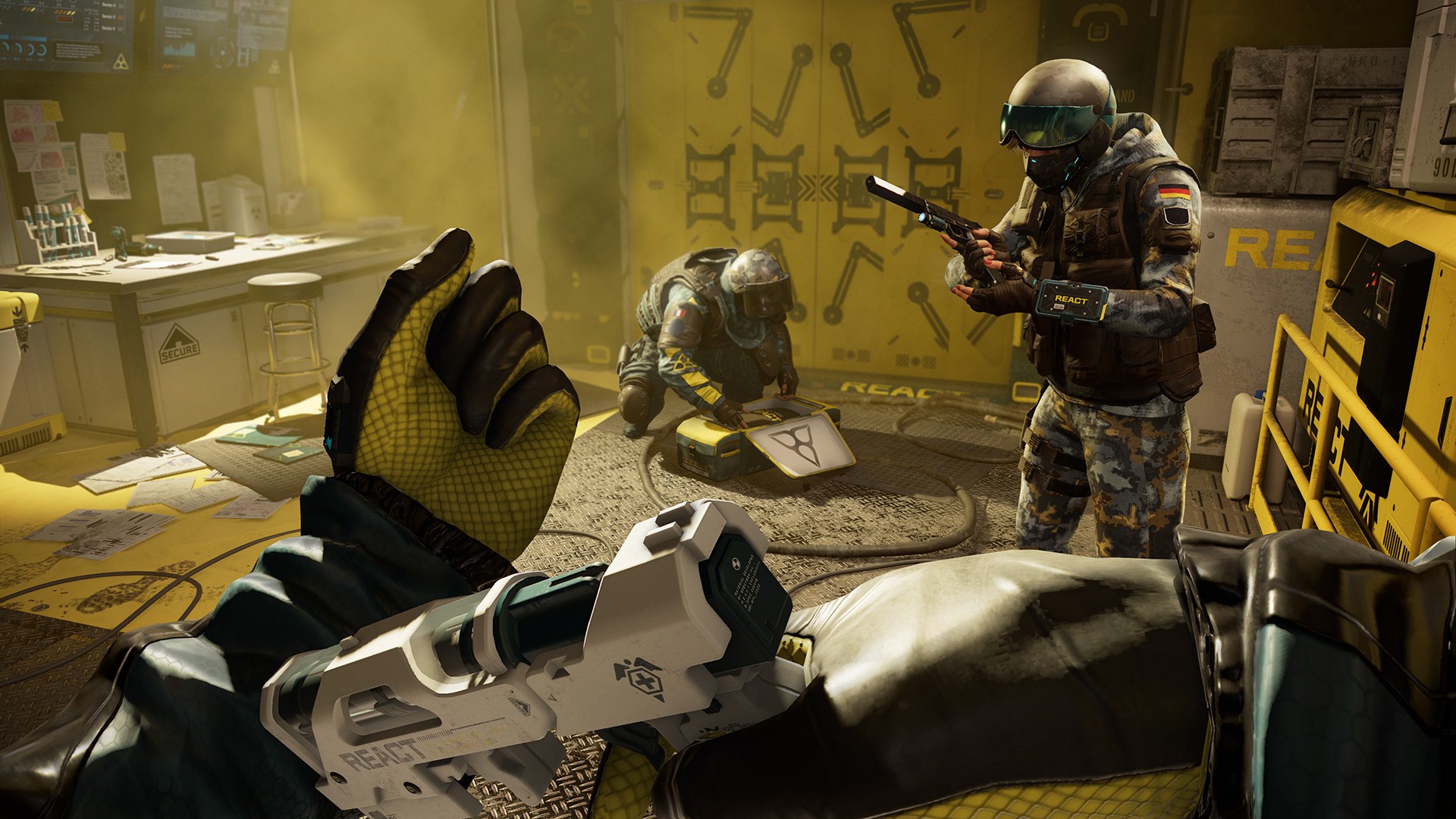 For anyone who hadn’t read about or seen too much of Rainbow Six Extraction, the first big surprise comes in the form of its randomized missions — there are three areas within each act/location, but the game mixes up starting points, objectives, enemy placement, intensity, etc. All of this happens within a definite difficulty that rises as you progress through the campaign of sorts. In practice, this means no two missions/runs are exactly the same, as the randomizer likes to throw curveballs and has enough tools to make the operations unpredictable. This unusual structure is what supports the gameplay loop of doing these missions several times in order to cross tasks off a list and learn more about the Archæans, which, in turn, pushes the narrative forward and levels up operators, the available tech, and the general progression (unlocking new acts, cosmetics, etc).

This is good news for those who wanted a different, more replayable zombie-shooting experience from Extraction, but it might turn off casual players looking to blast through a list of linear missions and shelve the game. It’s not an extremely demanding or time-consuming title by any means, but it’s not a breeze either — bringing in two friends or reliable squadmates is clearly the best way to experience the game, as it’s a much more tactical FPS than its competitors. Moreover, “killed” operators go MIA and have to be rescued in subsequent missions in the same area. Fail to rescue them and they’ll be consumed by the infestation — they’ll “respawn” in your roster, but lose progress and (potentially) levels. As I said, the game ain’t hard to play, but demands to be taken seriously. And some randos online aren’t able to understand that, so expect to rage more than a couple of times after messy situations totally created by uncollaborative teammates.

It’s also great to see well-known Siege operators, with their respective abilities and weapons, make the jump to a whole different experience. In most cases, their gadgets and skills have translated well into Extraction, but some feel like head-scratchers and may need balance passes and/or reworks. Gunplay and movement remain largely the same, as this essentially is a Siege expansion that got too big. It’s happened in the past with other titles (think of the Far Cry spinoffs), and I think that’s okay; Extraction has more than enough meat on its bones to justify the price tag, plus its presence on Game Pass is a big bonus and will allow folks who wouldn’t play it otherwise to check what this is all about. 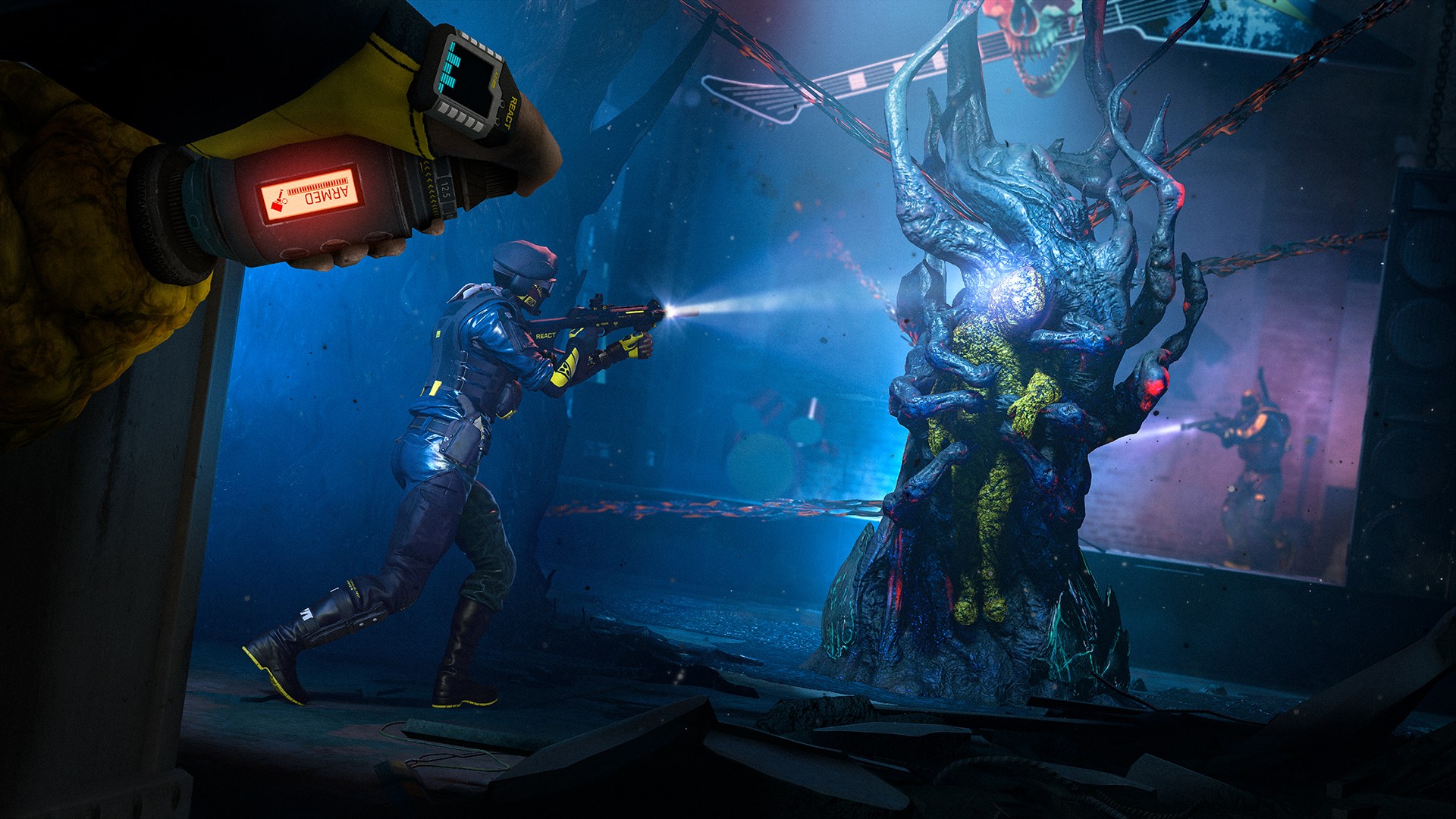 If you think the first couple of hours aren’t too exciting or chaotic, wait until you progress through the locations — Archæans start to evolve in unsuspected ways that force you to rethink entire strategies and make collaboration at all times a must. Being downed during the earlier missions is easy, as even the grunts hit hard, but ranged attacks, teleporting enemies, traps, and the overwhelming hostility of the (living and destructible) environments, among other things, make other zombie-centric FPS feel like school trips. Plus, the slick sound design definitely helps. Although there isn’t much story or plot twists to uncover here, I still recommend going in as blind as possible.

On PS5, the game targets 60 FPS and hits that mark consistently with two different graphical modes: Resolution and High Performance. The former tries to stick to full 4K as much as possible and offers a crisp and clean image, but brief performance drops aren’t out of the question in later stages when action gets too hectic and the dynamic resolution can’t save the day as soon as necessary. High Performance doesn’t aim for 120 FPS, but instead guarantees locked 60 at all times plus better visual settings (not that different) by hovering around 1080p. In most scenarios, gamers with a 4K display will want to go with the Resolution mode, as the clearer picture offers a competitive advantage in long-range engagements and scouting. However, folks who are all about super stable performance 100% of the time may want to choose High Performance. The weird thing here is that Resolution isn’t an option if your display isn’t 4K, which isn’t how every next-gen game I’ve tested so far handles these settings — thanks to downsampling, a higher internal resolution is beneficial to image quality even if the display can’t take full advantage of the original pixel count. 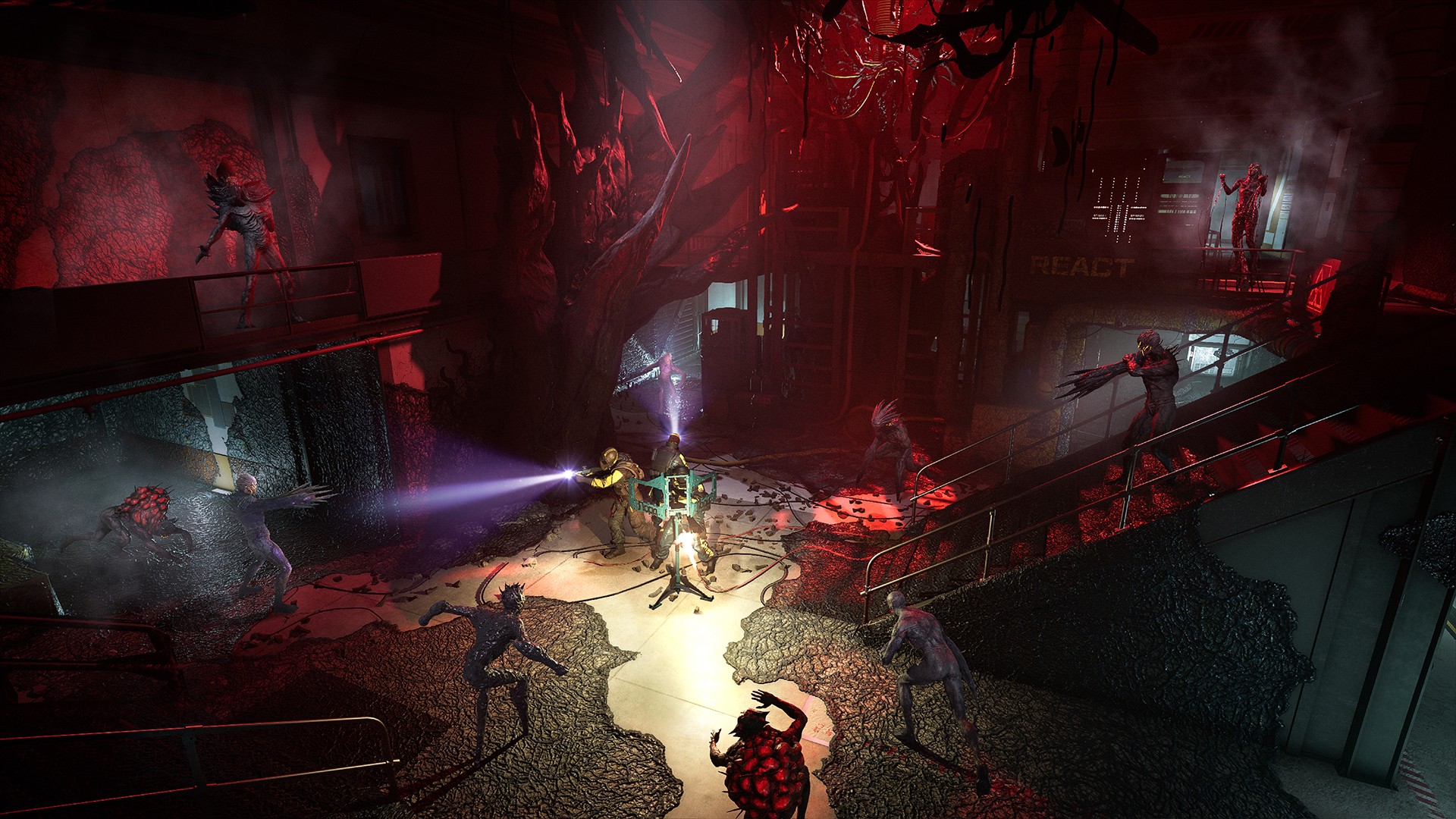 Rainbow Six Extraction is, in my humble opinion, the first big surprise of 2022. It won’t make the “best of 2022” lists nor catch the attention of players who are looking for 100% fresh FPS experiences, but the team at Ubisoft Montreal haven’t crafted yet another derivative co-op title. It’s got a strong identity and offers a thrilling, uncertain experience with every run. Furthermore, plans for free post-launch content (operators, missions, enemies) are already in motion, and it seems like the lower price tag + Game Pass + Buddy Pass strategy is working out fine — the game has already cocooned three million unique players. Hopefully, none of that NFT bullsh-t will touch this game, although that sounds highly unlikely right now. Sad!

Tom Clancy’s Rainbow Six Extraction is now available on PC (through Ubisoft Connect and Epic), PS4/5, and Xbox consoles, plus cloud services Google Stadia and Amazon Luna. On top of that, it hit Game Pass (on Xbox and Windows) as soon as it launched. Cross-play and cross-progression are available across all platforms.

Thanks to Ubisoft for the PS5 review code.