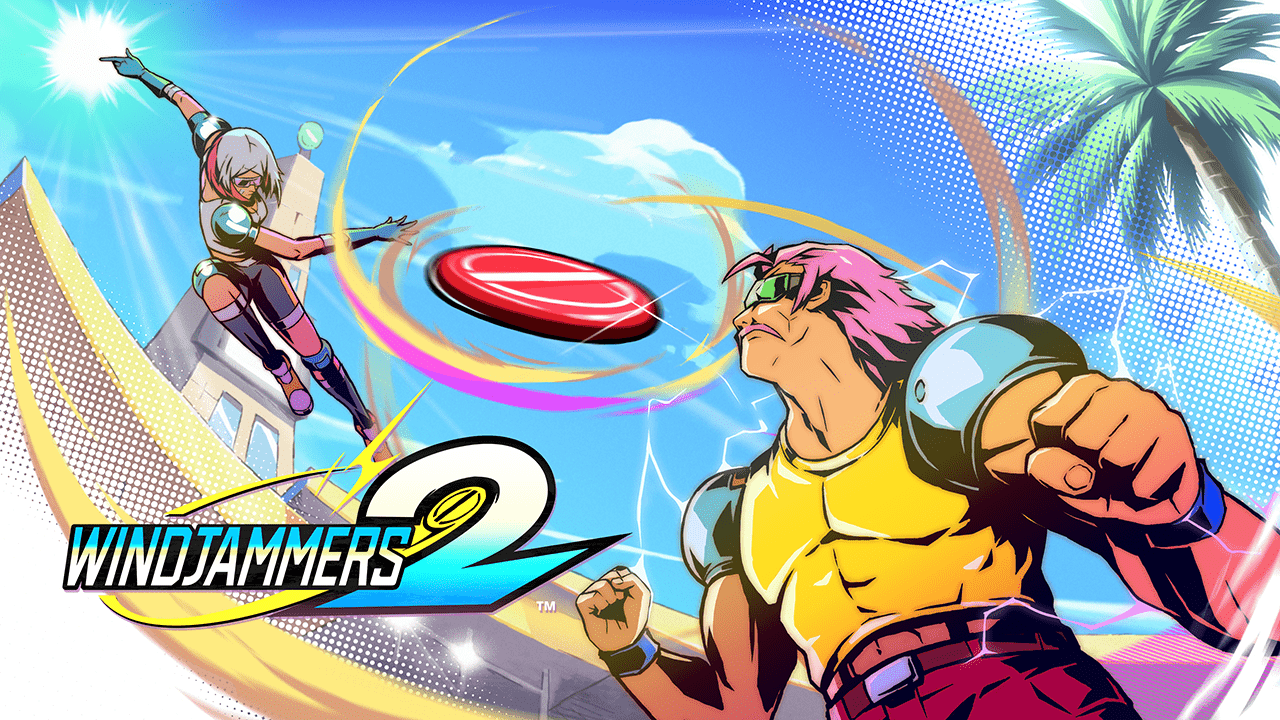 After almost three decades, Windjammers 2 is a reality. But how many new ideas does it actually pack?

French developer and publisher Dotemu is no stranger to handling old IPs and giving them a new lick of paint and re-releases, and sometimes even sequels, such as 2020’s Streets of Rage 4. As a result, everyone expected Windjammers 2 to be a successful revival of the original Neo Geo arcade game from 1994, which Dotemu had ported to modern systems before.

First announced in 2018, Windjammers 2 is a sequel to the fast-paced, frisbee-throwing classic. It looks and plays exactly how you’d expect a modern but 2D Windjammers to look and play. And that’s great, but it also has some huge limitations by design and lacks the will to refresh the formula. And, as polished and fun as this sequel is, it’s hard to imagine where almost four years of development (with several delays) have gone. 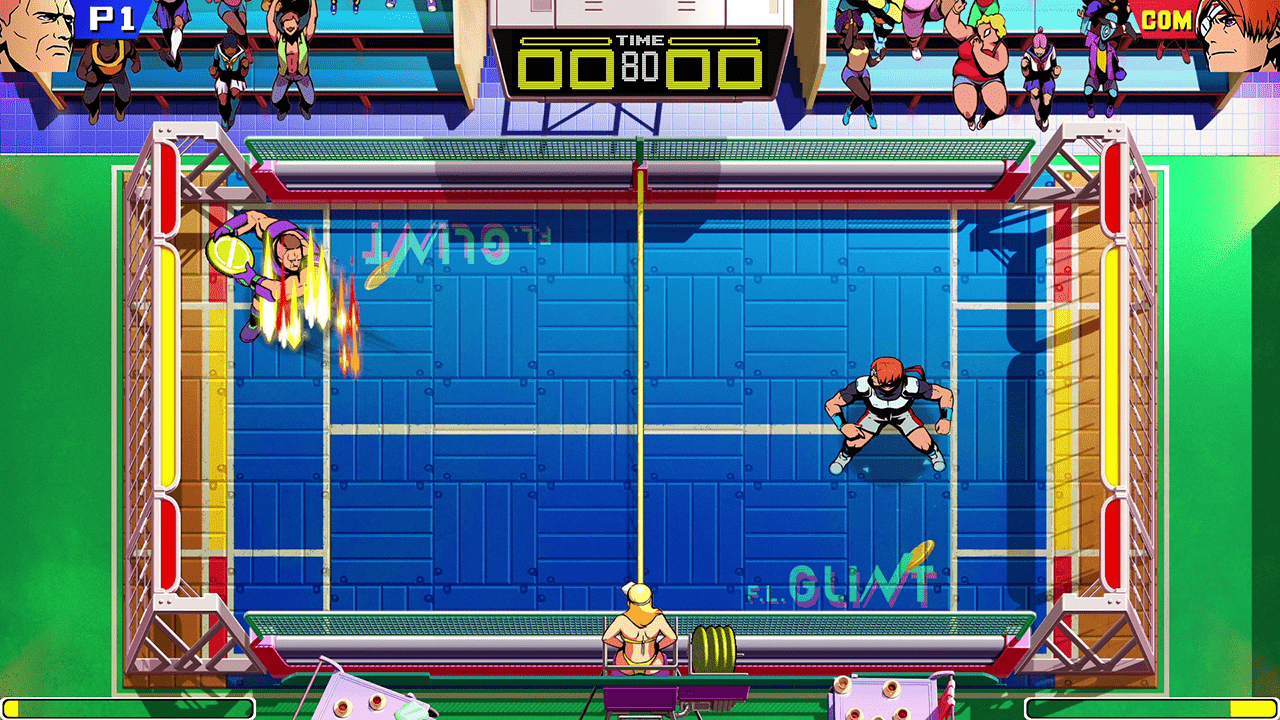 As soon as you boot up the game, you’ll notice it lacks a Tutorial mode, which is weird considering how merciless both AI and human opponents are. Instead, the game (optionally) explains the controls through a handful of pages with drawings; it’s a rudimentary welcome to the game, and most players won’t remember advanced techniques during the first couple of hours just because they read about them — Windjammers 2 is frenetic enough without high-level plays, with standard throws, lobs, slaps, and jumps already working together to deliver an unpredictable rock-paper-scissors of a video game.

Most players will also move on to the Arcade mode right afterwards, only to find out it’s quite barebones and barely tries to offer a sense of progression or tell a story with its ten playable characters — it’s mostly a bunch of increasingly difficult AI matches through a number of rounds, with two credits (extra lives) that can be used to avoid the Game Over screen. Pretty basic stuff, mostly a warmup, although some achievements are linked to this activity, plus two minigames have been included. 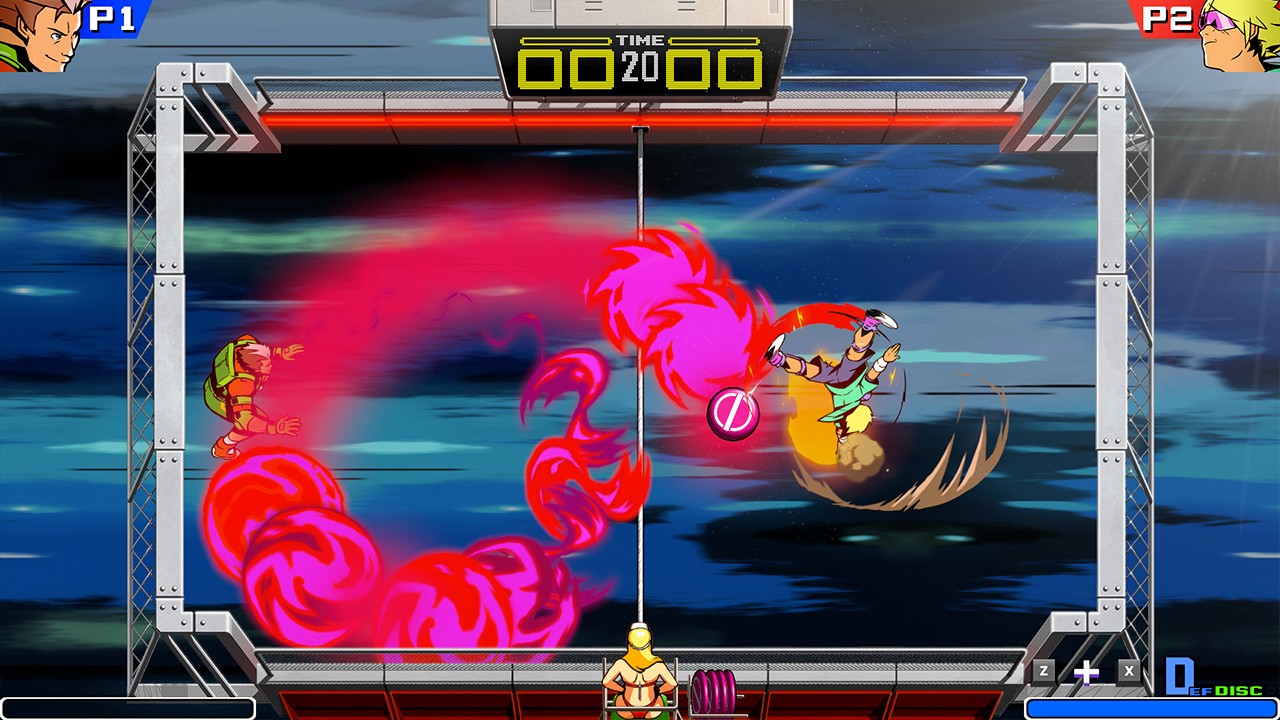 So, the game’s very thin, extremely thin. While the mechanics have been upped and its stylish hand-drawn visuals are too charming to resist, Windjammers 2 is essentially Windjammers 1.5 featuring online play because that’s the bare minimum we expect from a modern competitive game. And yes, that’s where the sequel truly gets to shine. Mind you, there are no surprising modes nor progression (besides ranks) put in place, so the entire experience largely feels like challenging random players and friends at your local arcade back in the 90s. Thankfully, I’m happy to report the netcode holds up — input lag is non-existent or negligible, and the flow between matches is quick and uninterrupted. PlayStation and Nintendo Switch players are bound to feel alone sooner than Xbox and PC disc-throwers though, as those two platforms sadly aren’t part of the cross-play infrastructure. Once the playerbase dies out, it’ll be all about local play with friends or relatives.

And that’s pretty much it. Windjammers 2 is a small game with small ambitions (and a small price tag), and it excels at doing what it needed to do. However, it also feels like a huge missed opportunity to push the IP forward in a meaningful way after 28 years. Even if the core mechanics are perfectly fine in this iteration of the formula, modern gamers who weren’t around to experience the original arcade classic probably won’t stick around for too long, since there are no rewards nor plans to make each win feel like an accomplishment. It’s a blast of retro fun to a fault.

Windjammers 2 is now available on PC (Steam), PS4, Xbox One, and Nintendo Switch. Of course, PS5 and Xbox Series X/S can play the game via backwards compatibility, plus it hit Game Pass (on Xbox and Windows) as soon as it launched.

Thanks to Dotemu and Tinsley PR for the PS4 review code.