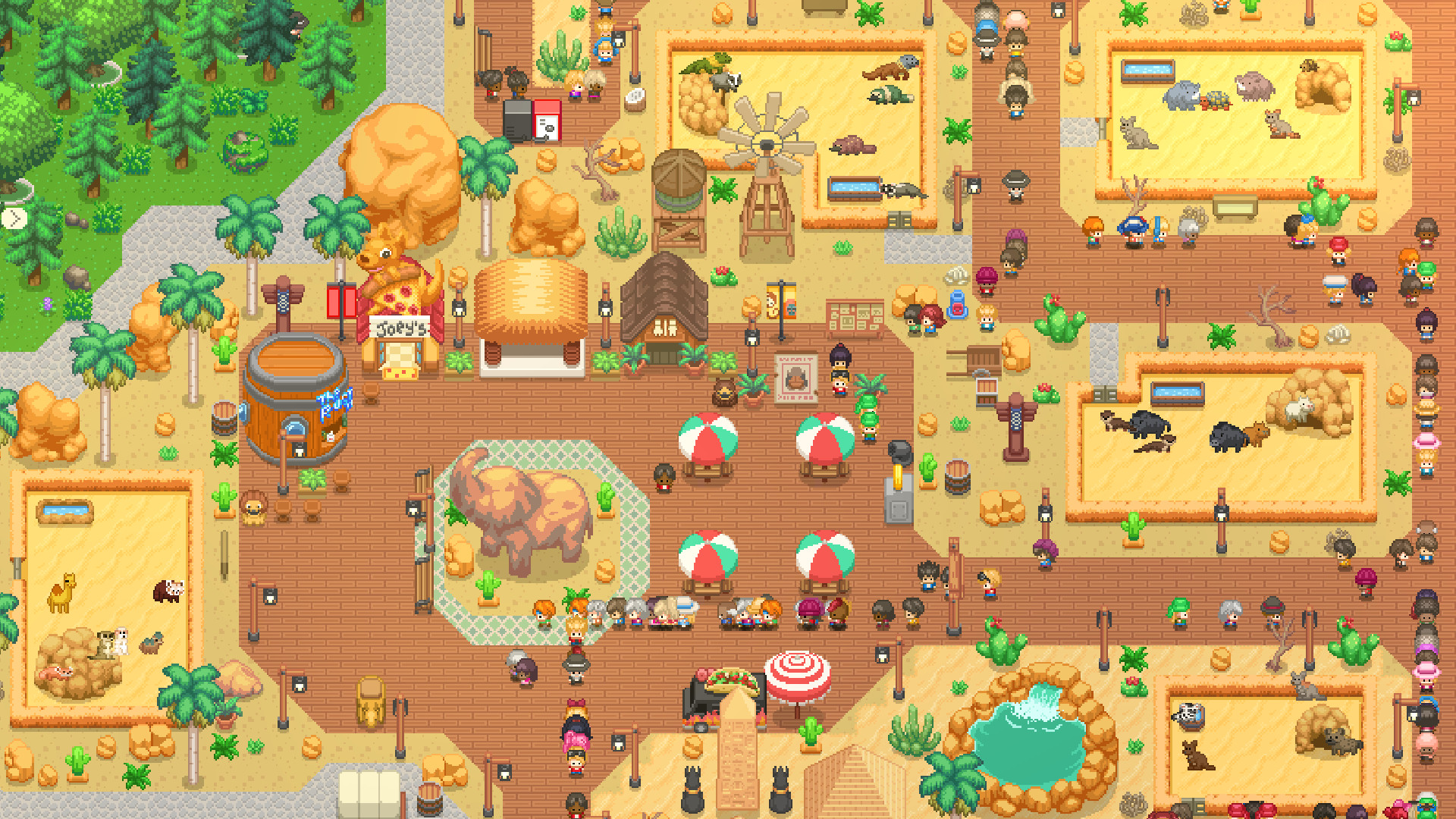 Building up a zoo from scratch hasn’t been this fun in years. Let’s Build a Zoo is largely a nostalgic blast with more than enough ideas of its own to cook up something special.

Indie publisher No More Robots has been around for a while now, slowly but surely catching the attention of PC players with small, off-beat games with strong creative visions. Their strategy has proven to be quite effective, and Let’s Build a Zoo appears to be doing extremely well since it launched in November, with a console version coming later this year too.

First off, let me tell you that I love management sims, especially “tycoon games” such as the RollerCoaster Tycoon series or, more recently, Jurassic World Evolution 2. The creativity and challenges that come with them automatically make my brain ask for more and more. However, not all of these games hit the sweet spot, with many feeling bland or derivative, lacking enough personality to justify the time investment. Thankfully, Let’s Build a Zoo is one of the strongest tycoon games I’ve played in years. 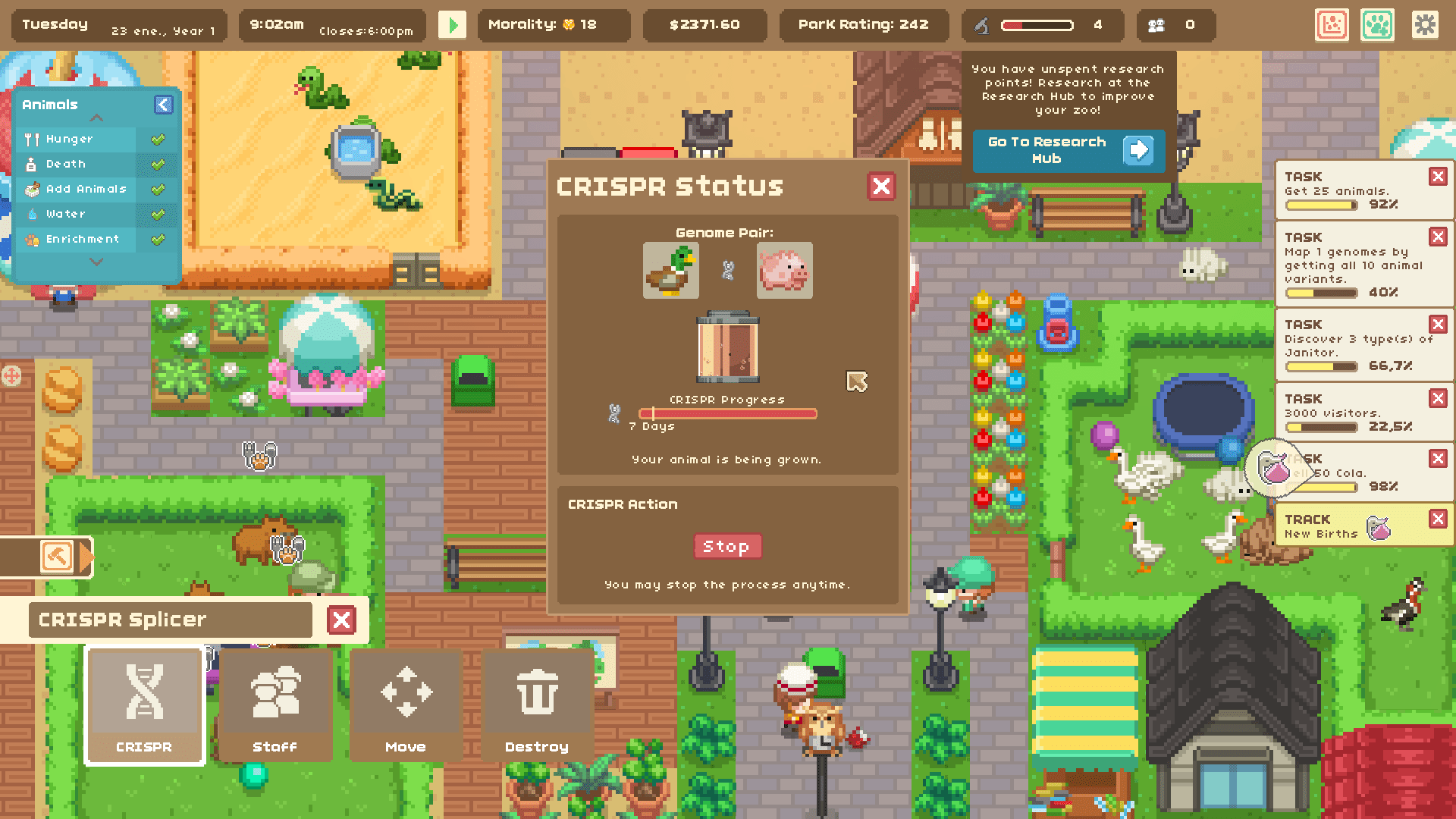 Let’s Build a Zoo‘s main gimmick is the promise of DNA splicing to “stitch together over 300,000 different types of animal.” I wouldn’t say it’s the game’s centerpiece, but it certainly is one of its main attractions. You don’t get to play God as soon as you boot up the game though — playthroughs kick off in a familiar way for management sim aficionados, with an empty plot of land and limited resources. The tutorials are quite extensive, but encourage creativity and are mostly manifested through tasks which help set simple objectives. These “missions” kind of guide the entire “creating a profitable zoo” endeavor — they soon become a welcome addition, as the game’s systems are way deeper than initially expected. I mean, it’s an accessible sim, but don’t let its cute looks deceive you.

Don’t be scared by the previous paragraph either; Let’s Build a Zoo gives players all the freedom and tools needed (sandbox mode included) to come up with the zoo of their dreams and design gorgeous theme parks (seriously, some folks out there are creating insane installations). When it comes to the (regular) animals, you can rescue, trade, or clone them. The first route is the cheapest and easiest, as trading animals with other zoos isn’t as simple as it sounds; they require specific variants of them, but you’re able to maybe grab a new variant yourself this way. This becomes more important as time passes and you’re looking to mix entirely different animals to produce new, weird-looking creatures. Cloning also needs the CRISPR gene-blending tech, but it’s a much speedier (although still costly) process. 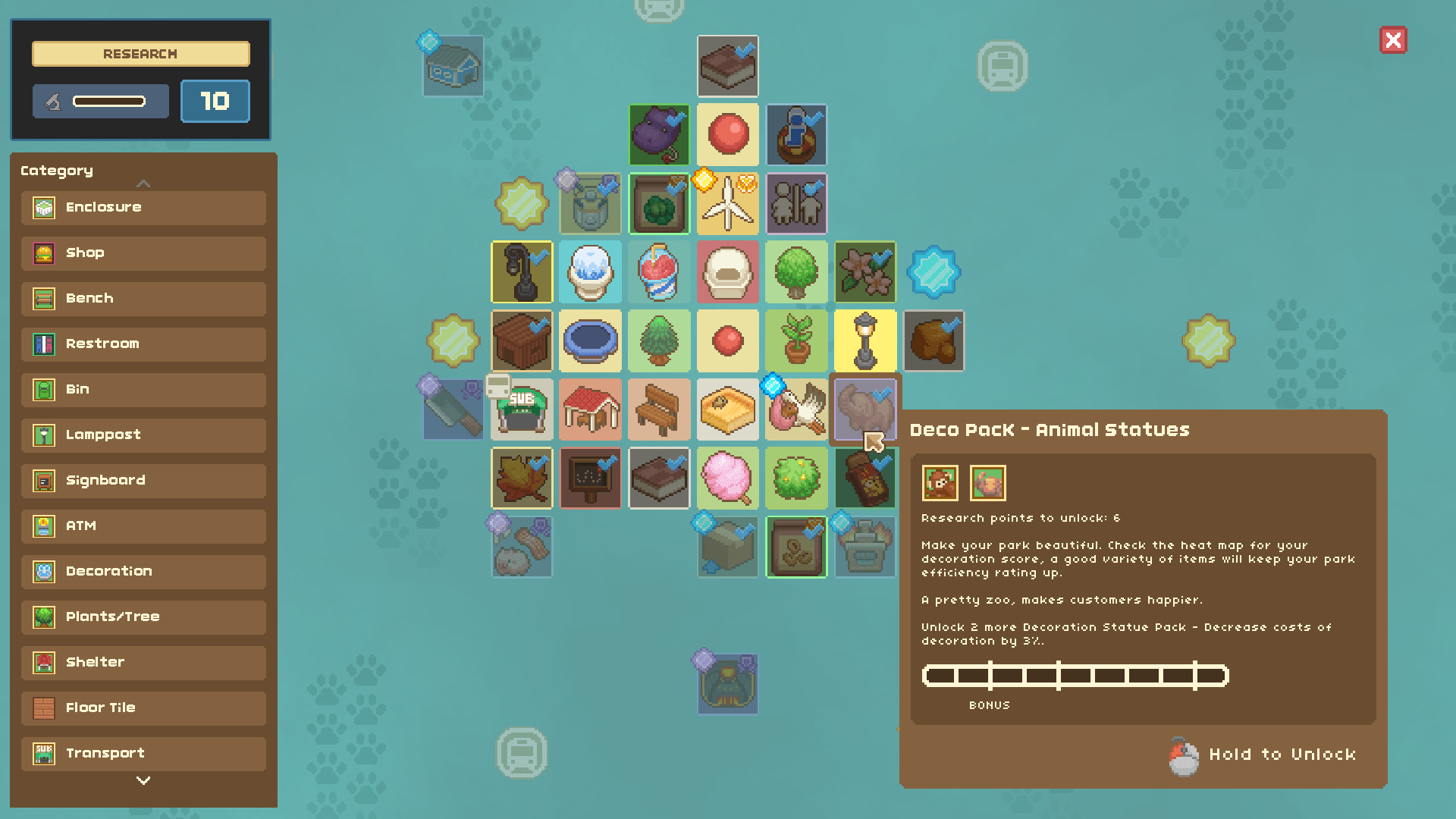 If all of this sounds a bit morally dubious, that’s what developer Springloaded wanted to convey. Let’s Build a Zoo is adorable-looking and as relaxing as you want it to be, but beneath the surface lie a number of important questions which are often posed to the player — shady black market dealers might want to pay handsomely for one of your animals, a crazy scientist may offer the option of adding a robo-lion to your park because science and easy profits, etcetera. There’s even a morality system in place to keep track of your good and bad choices. And there’s no correct nor wrong way to run your zoo; these choices simply open up different possibilities (research, buildings, and more). Let’s Build a Zoo is both deeper and larger than anyone anticipated in the best possible ways, and it’s bound to keep growing with free content updates (already happening) and larger chunks of DLC yet to be revealed.

While the game’s core gameplay loop resembles that of the Zoo Tycoon series over other franchises, its 2D visuals remind me of the original Theme Park, and I adore that visual style. Going retro isn’t just a choice which makes development easier for small indie studios, but also an opportunity to improve upon old-school graphics while honoring them. I feel like some studios don’t really take advantage of choosing 2D for their games, but Springloaded created something really pleasing to the eye that quickly gels together and is perfectly readable even when things get hectic. By the way, the peaceful and uplifting music and sound design help tons as well — Let’s Build a Zoo might get dark often, but it’s a thoroughly cheerful time sitting in front of your computer for more hours than you should. 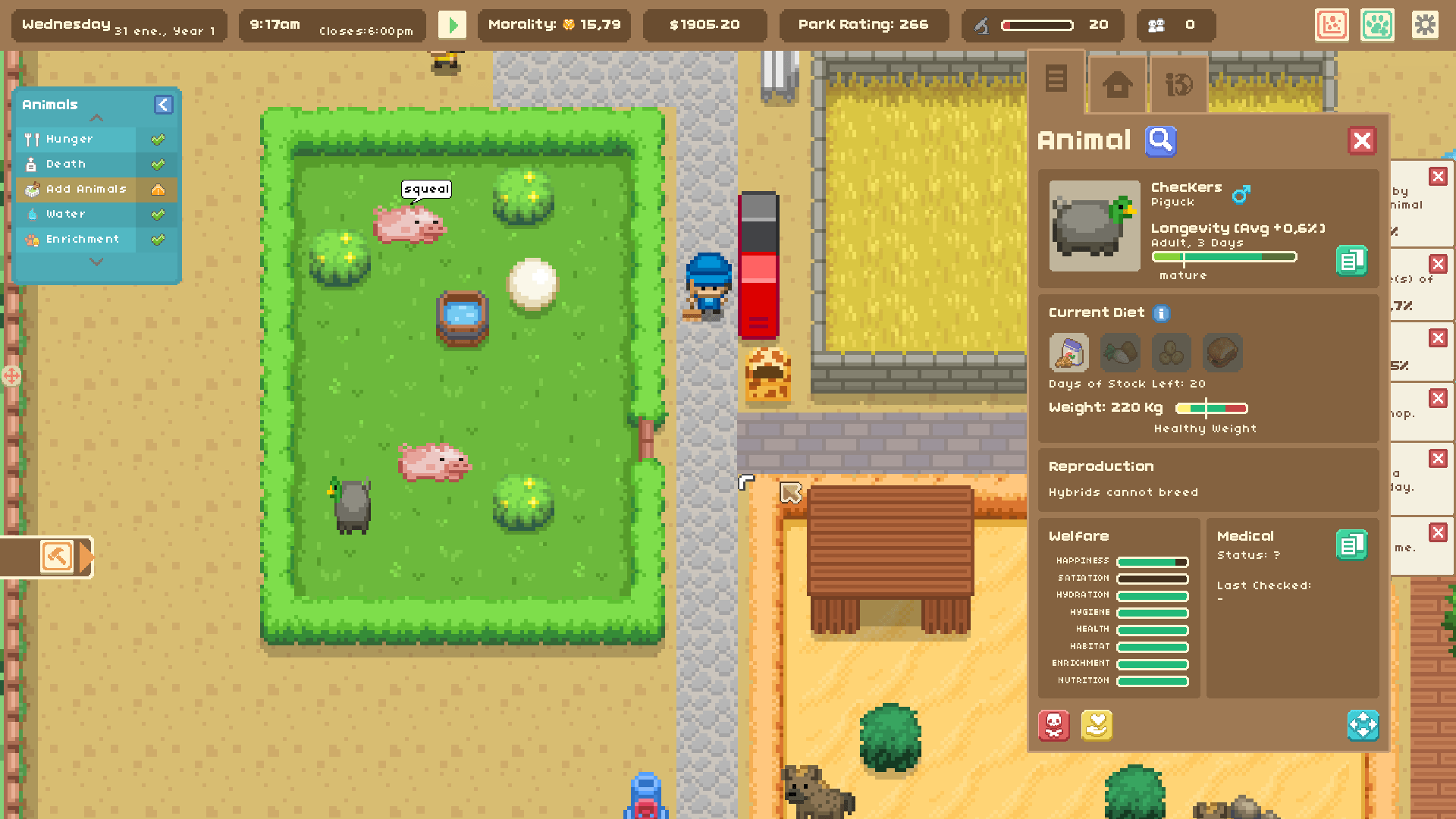 On the not-so-good side of things, I must say the menus-inside-menus could use some work and streamlining. I know where things are at all times, and the game actively gives you directions, but micromanagement can easily become a hassle later on with so many windows that lead to other windows — I wish taking care of my workers and the intricacies of the parks didn’t require as many clicks. Additionally, some parameters sometimes have trouble updating after you’ve changed, for example, an enclosure to meet the animals’ needs. Let’s Build a Zoo is perfectly polished as it stands, but there’s room for improvement here and there.

Thankfully, No More Robots and Springloaded are very much active on social media and the Steam forums, with many small patches hitting right after feedback is received — it’s great to see this degree of fluid communication and transparency, regardless of the size of the game. This gives me great hope for the future of a management sim which already feels better than most of its competition; this is a must-play for anyone into tycoon games and particularly those looking for an alternative to replaying the original Zoo Tycoon over and over again.

Let’s Build a Zoo is available on PC (Steam and Epic), with a console release on all current platforms set to arrive later this year.

Thanks to No More Robots for the review code.