‘Chorus’ Review: Flying Back into the Void 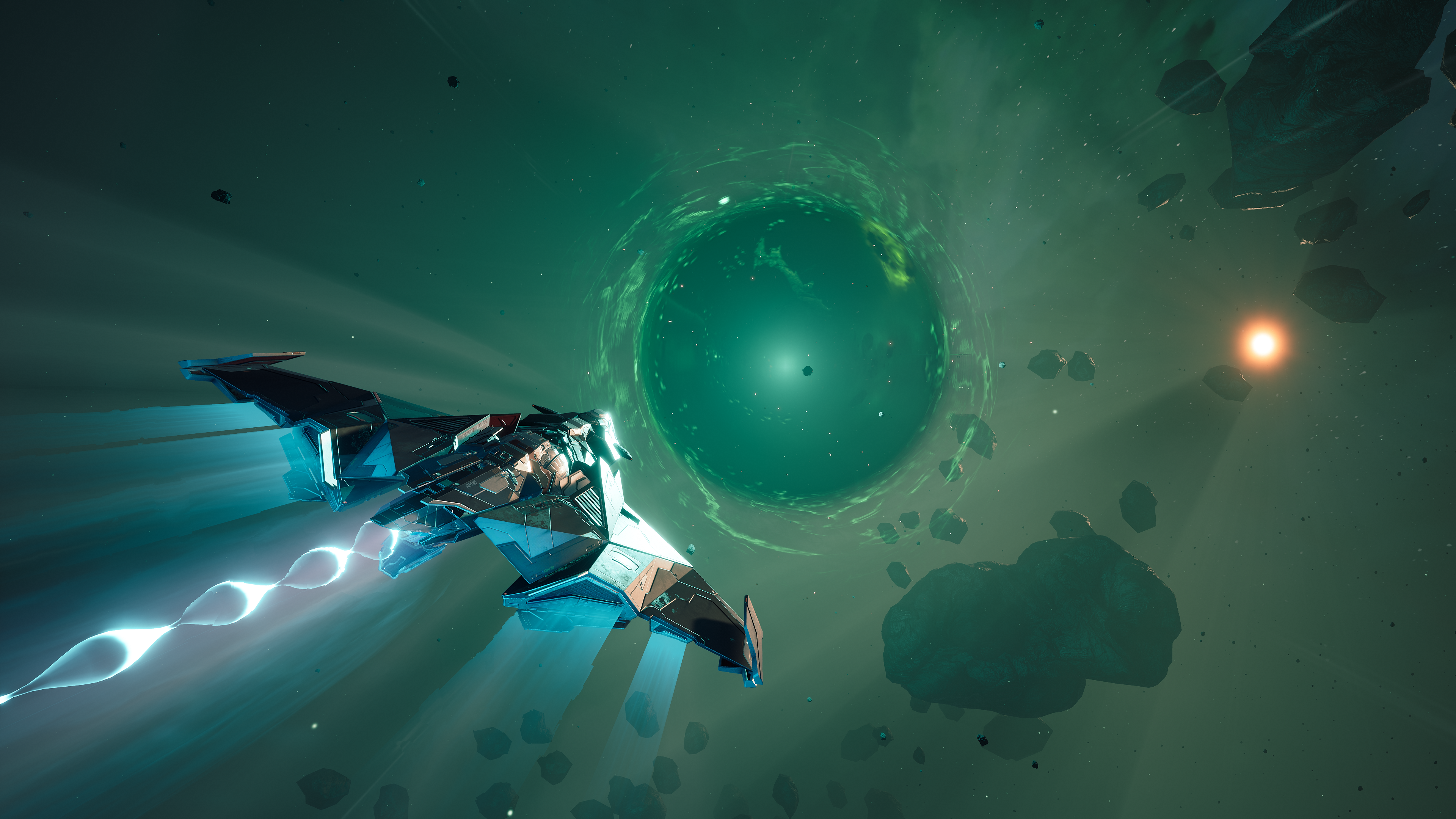 Chorus invites players to finish a fight that endangers the entire galaxy, but this ride is bumpier than anyone anticipated.

Fishlabs, acquired by Koch Media and made part of Deep Silver in 2013, are no strangers to space combat games. However, most of their games have been limited to portable devices, so it was surprising to see them try their luck with a bigger, sprawling original title after a number of sequels, small spinoffs, and Nintendo Switch ports. I can easily see a pitch as interesting as Chorus plowing through their publisher’s defenses, and I’m glad they had the chance to develop it.

Chorus hits the pedal from the get-go and briefly explains the current status of the galaxy: in the far future, humanity is threatened by an oppressive cult called the Circle, led by the mysterious Great Prophet. The twist is that Nara, our superpowered protagonist, was one of the Circle’s main executors, enforcing their beliefs and destroying their enemies. Moreover, she was very close to the Prophet, so leaving all that pain behind and then choosing to push back against the enormous cult is quite an emotional ride for her. Her ship and tool of destruction is Forsaken, a sentient starcraft who holds many secrets. While fresh, the basic premise sounds relatively ordinary, but don’t let it fool you — the plot gets extremely weird in the best possible ways, and Chorus is much more than a run-of-the-mill space shooter. 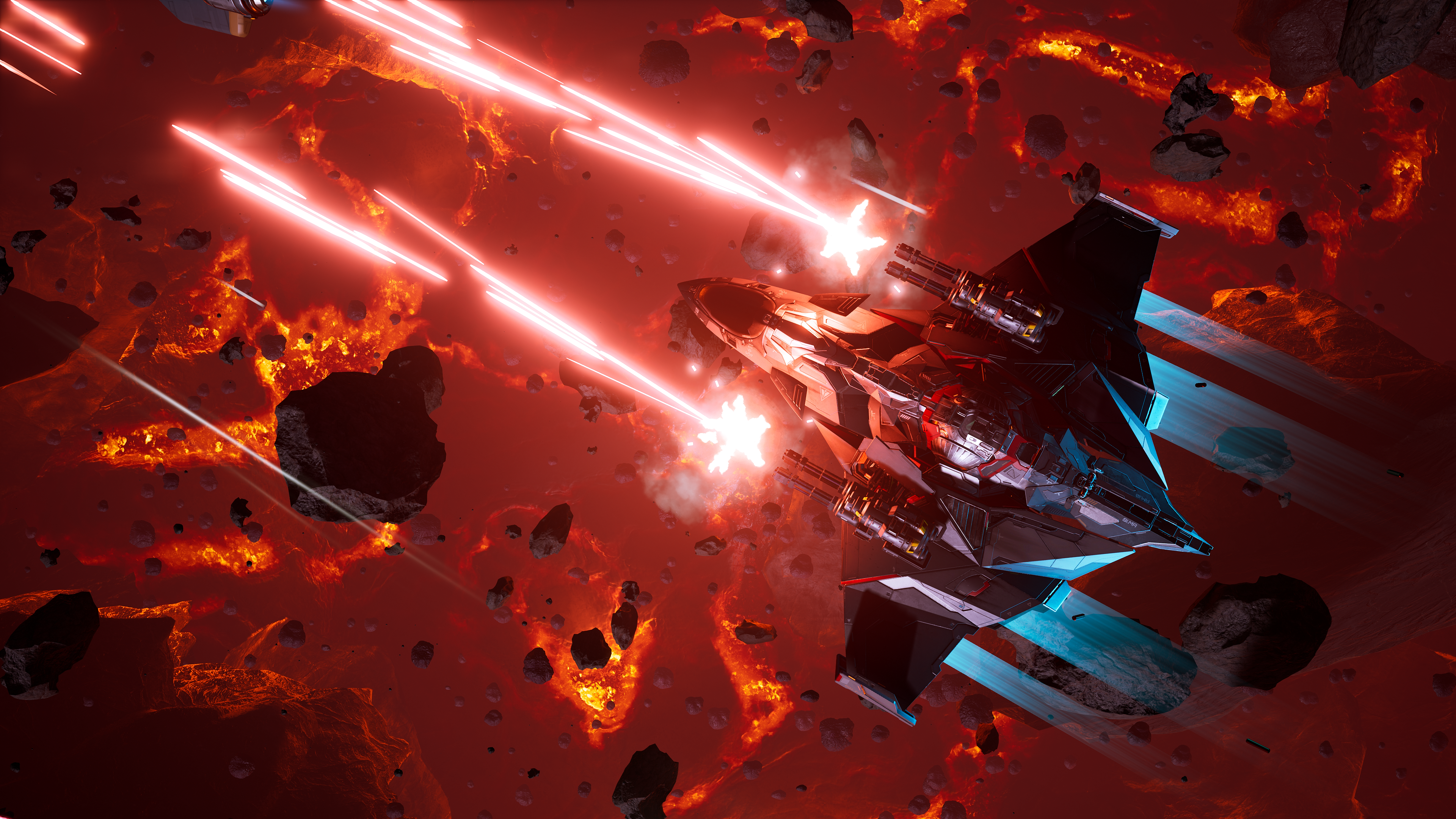 The game is mostly arcade-y, so don’t worry too much about spending hours trying to figure out complex sim-like controls. Forsa is easy to pilot and extremely mobile, and its weapon systems are as straightforward as possible. This approach to making breakneck, heavy space-combat action accessible permeates the whole game — the progression and upgrade mechanics, which also affect Nara, are simple, and the open-world (split in big zones) is welcoming and almost relaxing. Exploration is encouraged, along with side missions, but don’t expect to find maps littered with pointless activities. Having the game’s wide areas feel almost desolate actually adds to the hopeless setting, and the corners of the galaxy that Nara and Forsa visit are often unsettling. As exciting as it is, Chorus is no cheerful adventure.

I was also largely impressed by the script, which appears to be more concerned with delivering an off-beat space adventure full of psychological twists and turns than accommodating the game’s systems and overall structure. It’s refreshing to see a space-combat video game put the story front and center, and I feel like, despite some pacing issues, Chorus tells a story that will stay with me for a while. Without spoiling anything, let’s just say the game goes places and cooks up really cool sci-fi concepts — fans of cosmic horror should be happy with this one, too. I personally thought Chorus unexpectedly borrows a lot from 2005’s Stealth (an obscure sci-fi action flick about a sentient fighter aircraft) and 2019’s Control (Remedy’s latest video game, which gets quite loopy). 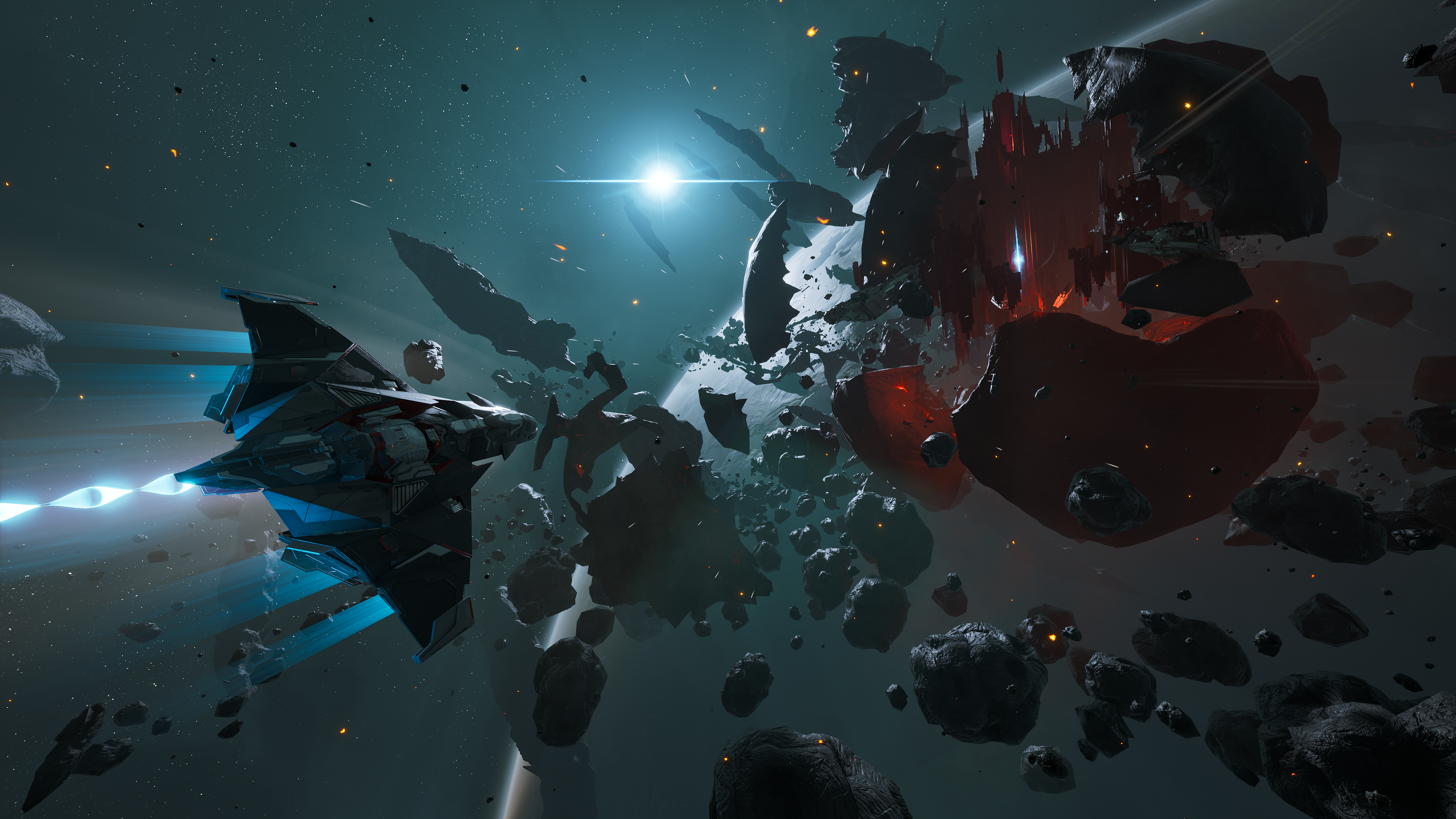 Chorus‘ storytelling efforts aren’t perfect though; some characters fall flat because there isn’t enough space for development outside of Nara and Forsa’s pathos, therefore dramatic moments which are supposed to be sad (cue in sorrowful soundtrack) end up feeling like footnotes. But I don’t think it’s the script’s problem, as the game very clearly worked with a limited budget — its use of cutscenes is limited to Nara’s key (and effective) moments in the story. It’d have been great to have more “downtime cutscenes” that developed other characters’ relationships with Nara, but this iteration of the game relegates almost every interaction to comms chat and lifeless portraits. I don’t think this weakens Chorus‘ strong narrative core, but missed opportunities abound.

It’s also weird to see Fishlabs completely neglect post-campaign content and secondary modes. The gameplay loop and moment-to-moment action are good and could easily sustain co-op, versus, or (at the very least) a horde mode of sorts, yet none of that is found in the game. It bets all its chips on the campaign; cleaning up the maps and fully upgrading Forsa adds roughly 5 hours on top of the expected 10-15 hours of a normal playthrough (which may be less if you’re skilled). I’m glad Chorus doesn’t overstay its welcome, as I feel it finishes right before missions start to become a chore, but it’s disappointing to see all the action the game has to offer end when the credits roll. Furthermore, there are no plans for downloadable content. As it stands, only a Permadeath setting is offered for speedrunners and hardcore gamers, but casual players won’t find bonuses outside the beaten path. 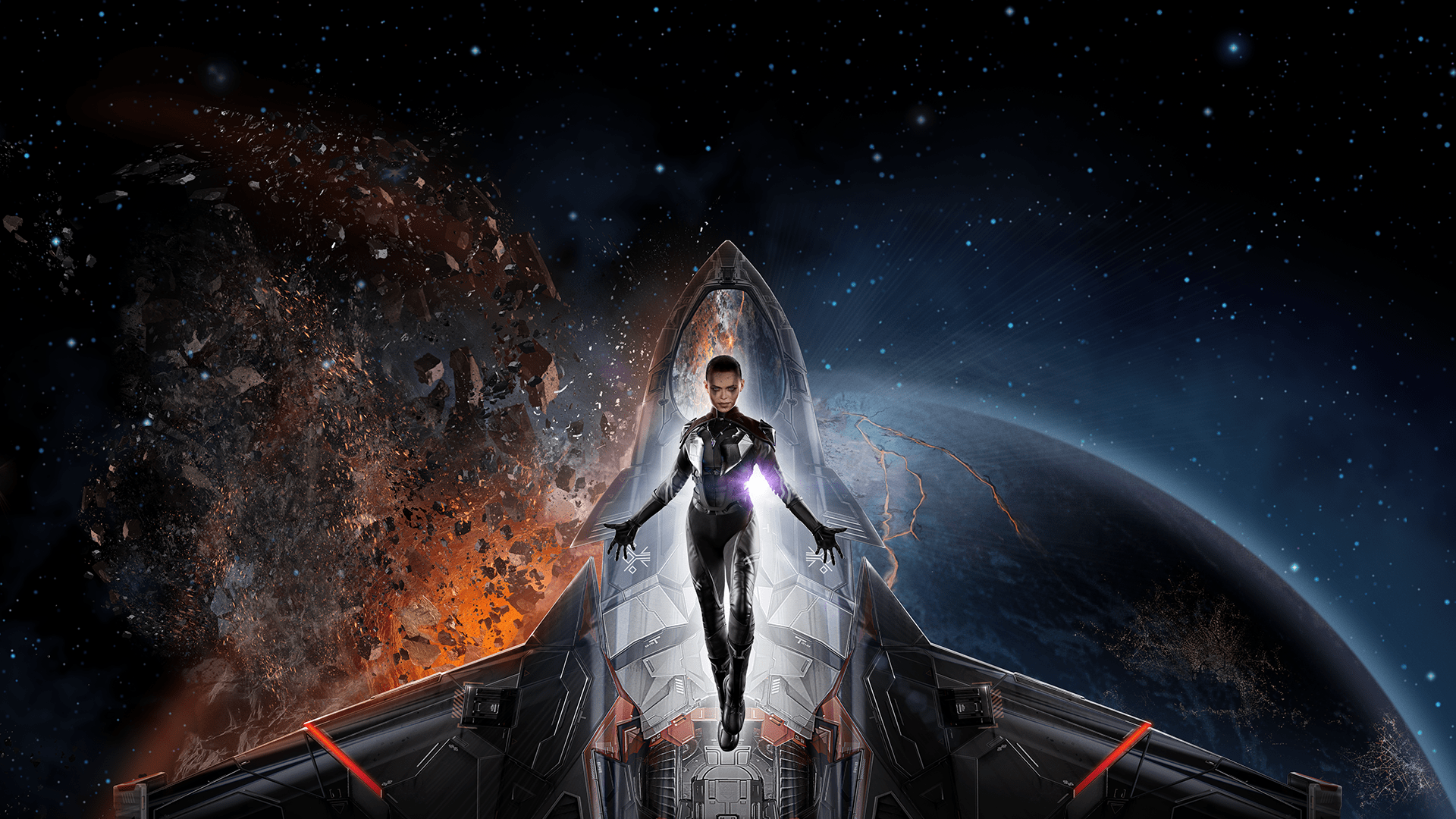 While Chorus isn’t a technical marvel, it sure does look good. I found the art direction be sharp and clear, and the game’s vistas are varied and often daunting — folks who are crazy about imaginative space settings and cool spaceships shouldn’t miss this one. Performance on PS5 is great too; the typical Performance/Quality switch is offered, with the latter locking the game to 30 FPS and amping the resolution to crisp 4K. I highly encourage sticking to Performance mode, since action quickly gets hectic, plus flying around like a shooting star feels amazing at steady 60 FPS. Sound settings are basic here, but more than enough — many recent triple-A titles have thrown plenty of options at me, but frequently struggled to deliver truly clear audio. Both sound effects and original soundtrack pack a punch.

Despite my quibbles with some bits of the narrative and the profound lack of enticing extra content, Chorus had me engaged from start to finish — it feels great to play, looks stellar, and tells a gripping story I wasn’t anticipating. If you can accept its shortcomings, you’ll experience a spacefaring, action-packed ride with a unique voice. Minor bugs related to mission triggers and map markers can pop up, but they aren’t frequent nor important enough to sour the experience, and I fully expect them to be crushed soon after launch; this is one of the most polished medium-sized releases I’ve played this year.

Thanks to Koch Media (publisher) and Tinsley PR for the PS5 review code.