‘Jurassic World Evolution 2’ Review: Life Will Not Be Contained 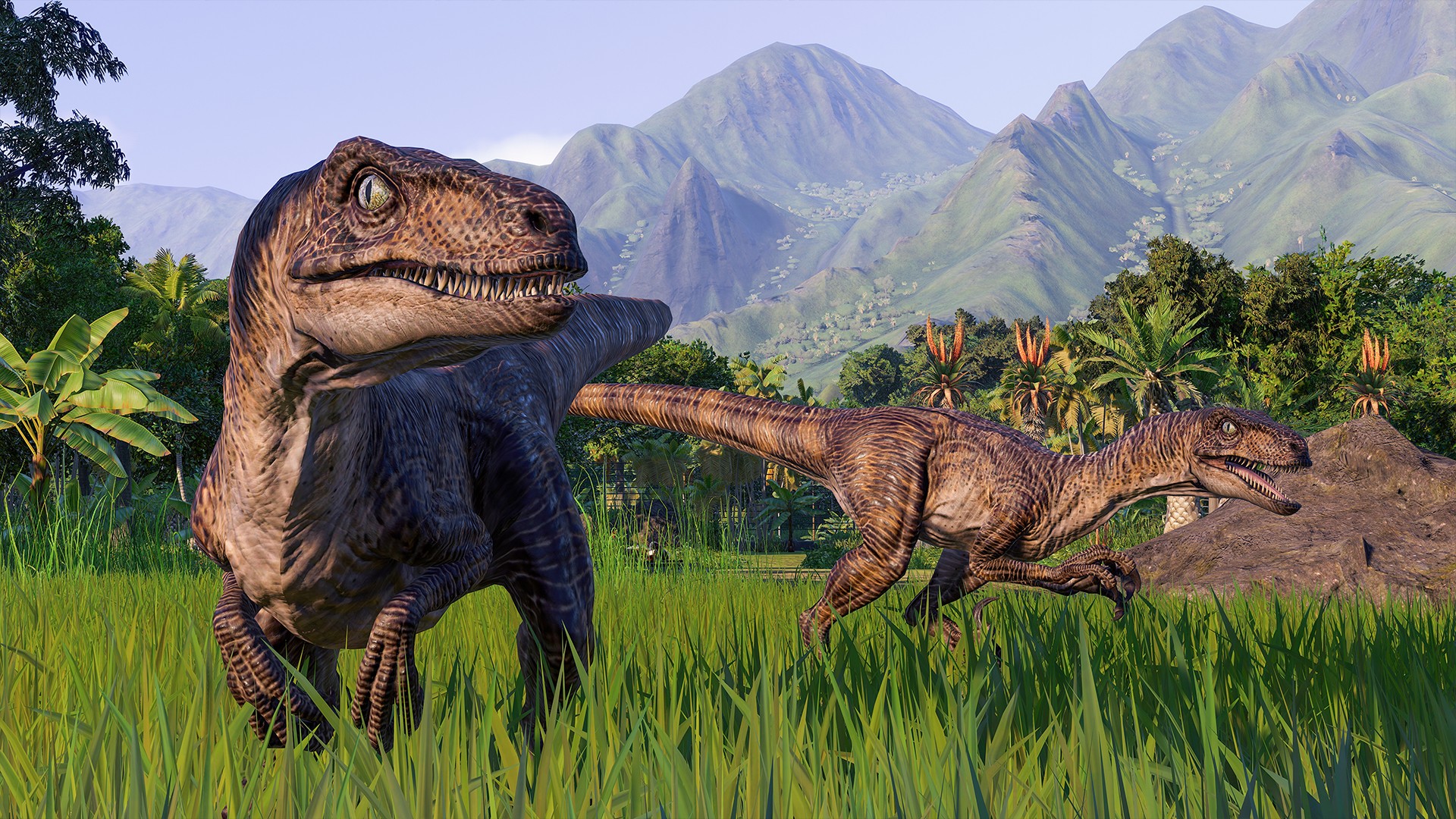 Frontier has spared no expense with Jurassic World Evolution 2, the much-anticipated sequel to 2018’s first dino-sized effort by the veteran studio.

Jurassic fans are hard to please. Trust me, I’m one of them. We don’t get many video games, and when we do, they’re rarely big projects, but rather mobile cash grabs. Of course, we went crazy with the announcement and launch of the first Jurassic World Evolution, especially since it was developed by Frontier, a heavyweight in the realm of simulation games. For the most part, that effort satisfied our dino-loving needs — the game was pretty, the dinosaurs were lively, and it was a clear upgrade from Jurassic Park: Operation Genesis, the 2003 management sim that had been modded to hell and back by diehards for 15 years.

However, Frontier didn’t hit all their targets with the first Evolution. While meaty post-launch updates and some really nice expansions and DLCs added lots of flavor to the formula and overall menu, fans were asking for more customization options and improvements to dino AI and animations. Furthermore, engine limitations blocked the arrival of aquatic creatures and better terraforming tools. A sequel was rumored for the longest time, and it was finally announced earlier this year. We could easily tell Universal and Frontier’s original plan was to release Jurassic World Evolution 2 alongside Jurassic World: Dominion, which got delayed to 2022 late last year. The film is coming out next summer, but the powers that be decided not to miss this upcoming Christmas season. 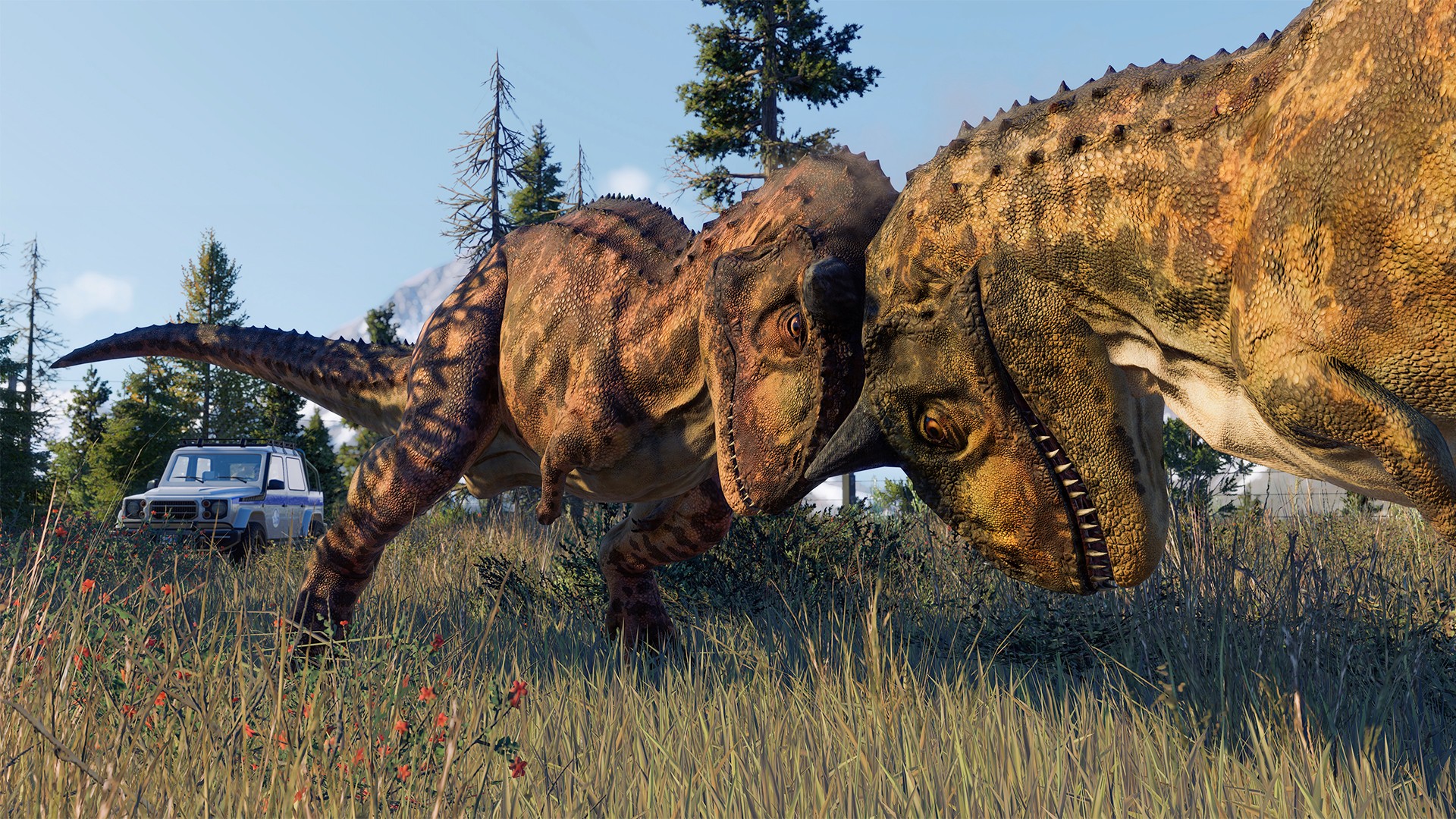 Evolution 2 is an interesting sequel, as it 100% builds upon what its predecessor nailed, but creates new issues for no good reason too. The prehistoric creatures are even more gorgeous this time around, their animations and behavior feel much more believable, sound effects and music are killer, and plenty of nice QoL improvements have been thrown in. On the other hand, the management aspect hasn’t become more interesting, only more cumbersome. You’ll still have plenty of time to kill (even when sped up) between the completion of important tasks, but now you also have to pay attention to who does what — the “scientists system” introduced in Evolution 2 could’ve been engrossing, but it’s just another layer of numbers and clicking through menus. I feel like it could be salvaged in future updates, but right now it’s just annoying and doesn’t feel like the right evolution (pun intended) of the “enterprise” side of the game.

As stated above, dealing with the dinos, pterodactyls, and aquatic reptiles is more interesting — there’s a fair amount of randomness involved in how the animals are created, and that continues throughout their adult life; they can be captured in certain scenarios, too. Players who simply want to relax will face some serious difficulties across modes other than Sandbox, as Jurassic World Evolution 2 feels way more authentic than previous Jurassic management sims in that life always finds a way to screw with your plans. The core experience consistently keeps me on my toes, and finishing certain missions is proving to be quite an adventure. 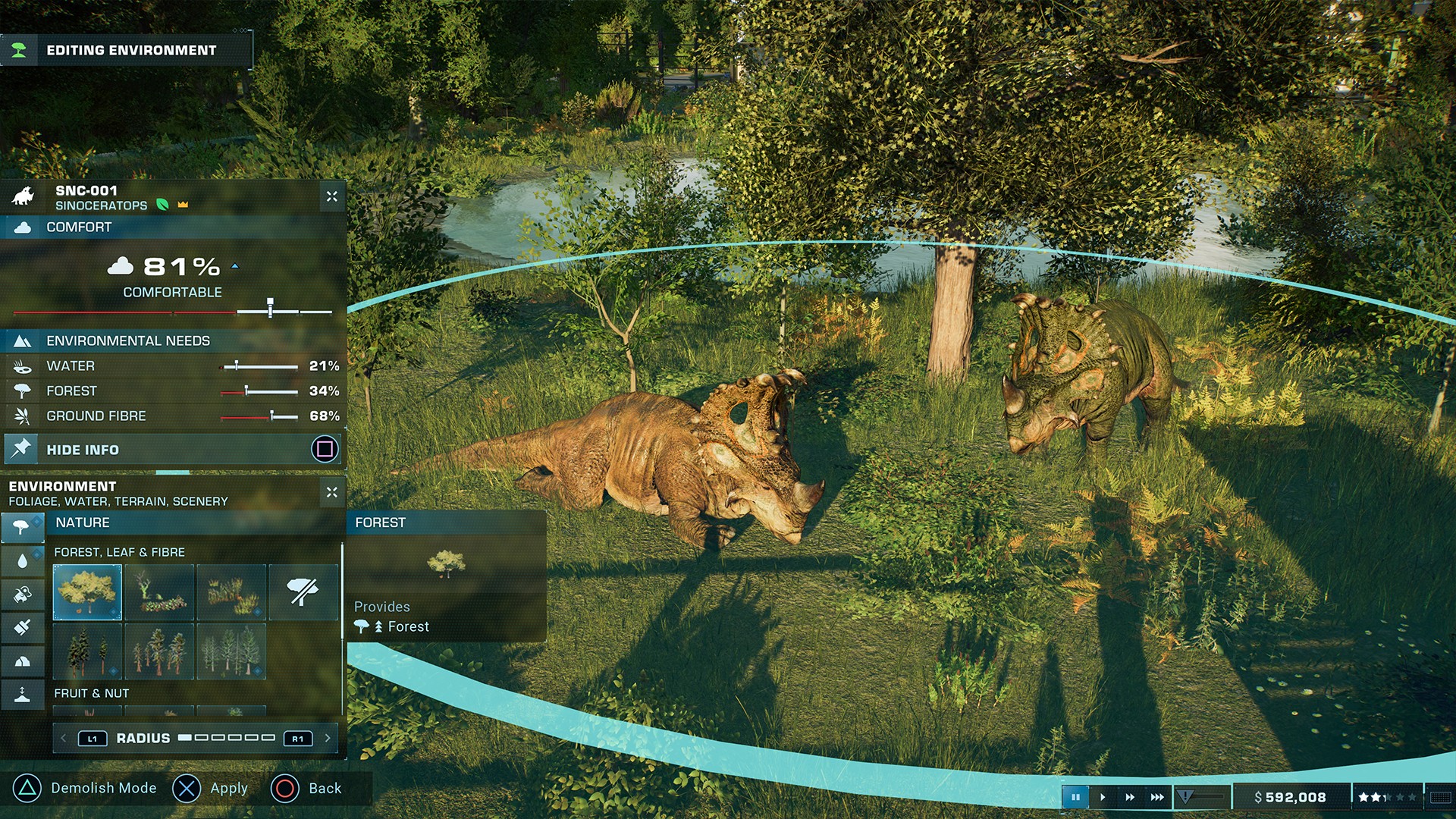 Four different modes are offered at launch: Campaign, Chaos Theory, Challenge Mode, and Sandbox. Don’t trust the first one, as it’s just a masked tutorial that runs for around 4 hours tops; the story picks up right after the events of Jurassic World: Fallen Kingdom, and has Claire Dearing (voiced by Bryce Dallas Howard), Owen Grady, and Ian Malcolm (played by Jeff Goldblum), among other characters, dealing with the consequences of these animals roaming free in the mainland and becoming part of preexisting ecosystems. Campaign is a little non-canon tale which takes players through the very basics of the game and sets the stage for next year’s film.

The meat and potatoes of Jurassic World Evolution 2 is Chaos Theory, a mode that sends players back in time to fix everything that went wrong in all five Jurassic films released so far, which is… a lot. Here, new tutorials, gameplay systems, and tips are thrown around for the longest time, as the game has a lot to teach and offer. Things get serious quickly, and the struggle becomes as real as it can be. Mistakes won’t be tolerated, and Mother Nature will give you more than a couple of headaches even if your T-Rex is “safely” contained. Nonetheless, it’s the game’s most authentic experience, and a glorious love letter to the entire franchise that dares to pose plenty of “what if” questions.

On top of Chaos Theory, players can test their mettle in Challenge Mode, which was around in the first game and presented the biggest trials devs could think of. Things are no different in Evolution 2, and it’s even more varied and unpredictable this time around, with plenty of difficulty options and maps to choose from. The only problem I (and many players) have with Challenge Mode is that it shouldn’t be an obligatory stop for more casual players who simply want to create the Jurassic Park/World of their dreams. I personally enjoy having a list of tasks to complete and juicy rewards waiting for me at the top of the mountain, but the bulk of the game’s amazing roster of prehistoric creatures shouldn’t be locked behind an objective-based mode that feels aimed at a very specific type of player.

Sandbox is exactly the kind of experience many people expect when they buy these games, and delivers plenty of tools, options, and freedom to build up an amazing park in a variety of settings. Hostile situations can be turned off entirely, same for economic woes. Here’s where you can mix-and-match whatever you want however you please. Be sure to take some nice pictures with the great photo mode too! 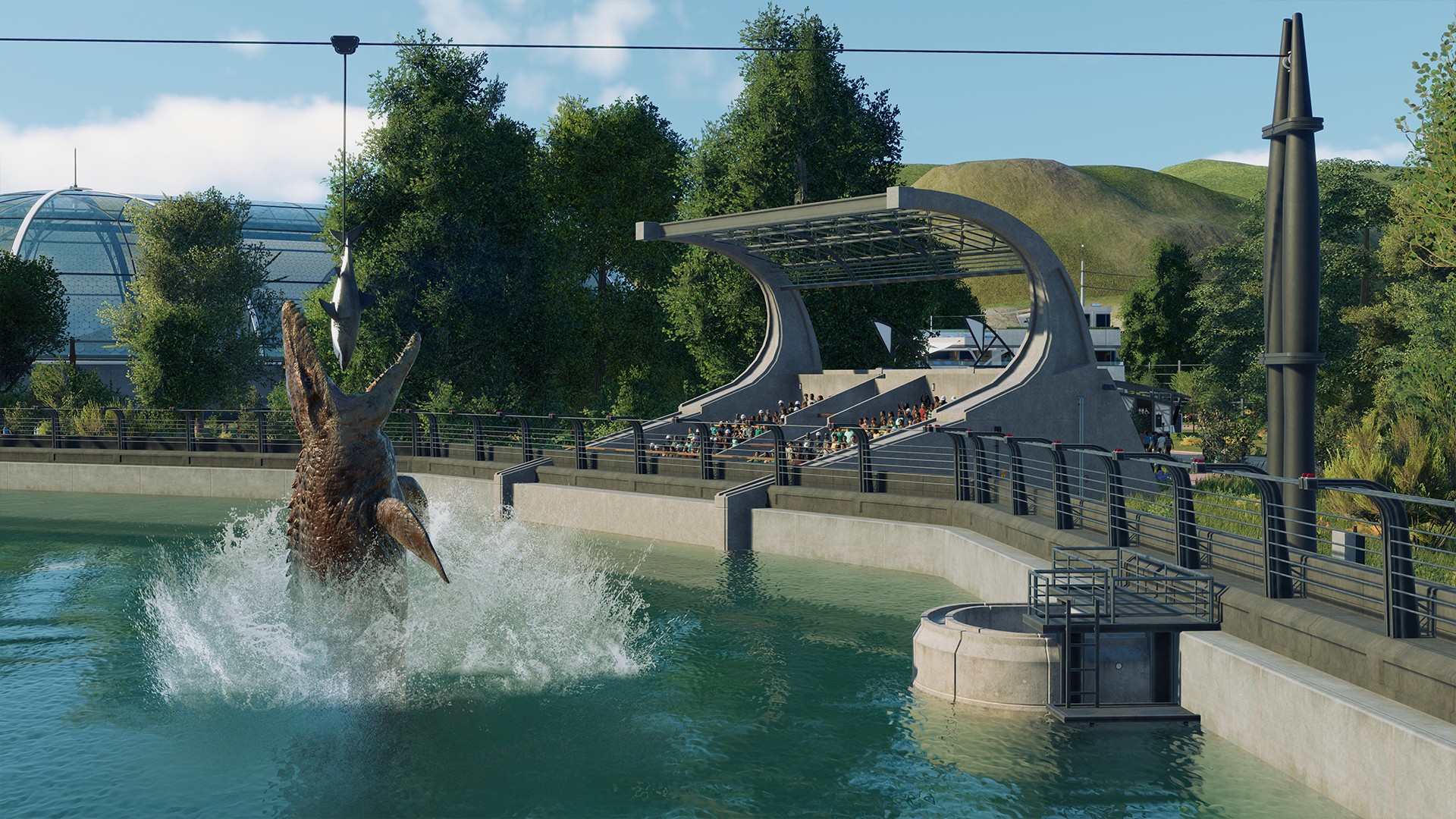 The game does hit 60 FPS regularly on PS5 (the version reviewed) despite players claiming the opposite. After some investigation, it appears that setting the console’s output to 1080p (the resolution I play on) unlocks the framerate. I’m guessing most complaints come from people who (understandably) are using 4K displays. Not having the choice between Quality and Performance inside the game is an odd decision by Frontier, as PS5 titles normally use the system’s Quality/Performance setting as a default, but also have an in-game switch, plus games that lack such settings simply output the best image quality they can, letting the console and display downscale. For now (this might be patched in later), manually set the PS5’s output to 1080p if you want performance over the sharpest visuals available — modern management sims are notoriously heavy on all CPUs, and this one is no exception. My experience with Evolution 2 has been absolutely pleasant and smooth despite the FPS drops, but maybe I’m just used to simulation games eating everything you throw at them.

Controls remain as intuitive and clear as they can be for a strategy game played with a controller. I thought the first game was clearly designed with consoles in mind, so I barely used the mouse + keyboard controls on PC — the transition to PS5 with Evolution 2 was smooth, as most inputs and shortcuts remain the same. The DualSense’s signature haptic feedback and vibration possibilities are scarcely used; you can feel the ground shaking when the bigger dinos are around, but hitting trees with a car causes little to no feedback. It’s like they gave up halfway through, but I guess it’s better than nothing. Maybe keep adding to it via patches? Please?

Jurassic World Evolution 2 squarely delivers on the promise of a bigger and deeper management sim filled to the brim with prehistoric creatures, although not every change is for the better. Moving forward, Frontier should double down on the game’s creative tools and selection of animals and decorations while polishing the rough edges of the “ugly side” of trying to replicate John Hammond’s dream. Challenges are nice, but clunky and repetitive tasks and menus are not. Now, give us Camp Cretaceous content as well.

Jurassic World Evolution 2 is now available on PC (Steam and Epic), PS4/5, and Xbox consoles. The Deluxe edition includes additional prehistoric animals — the upgrade can be bought separately too.

Thanks to Frontier Developments and Maverick PR for the PS5 review code.