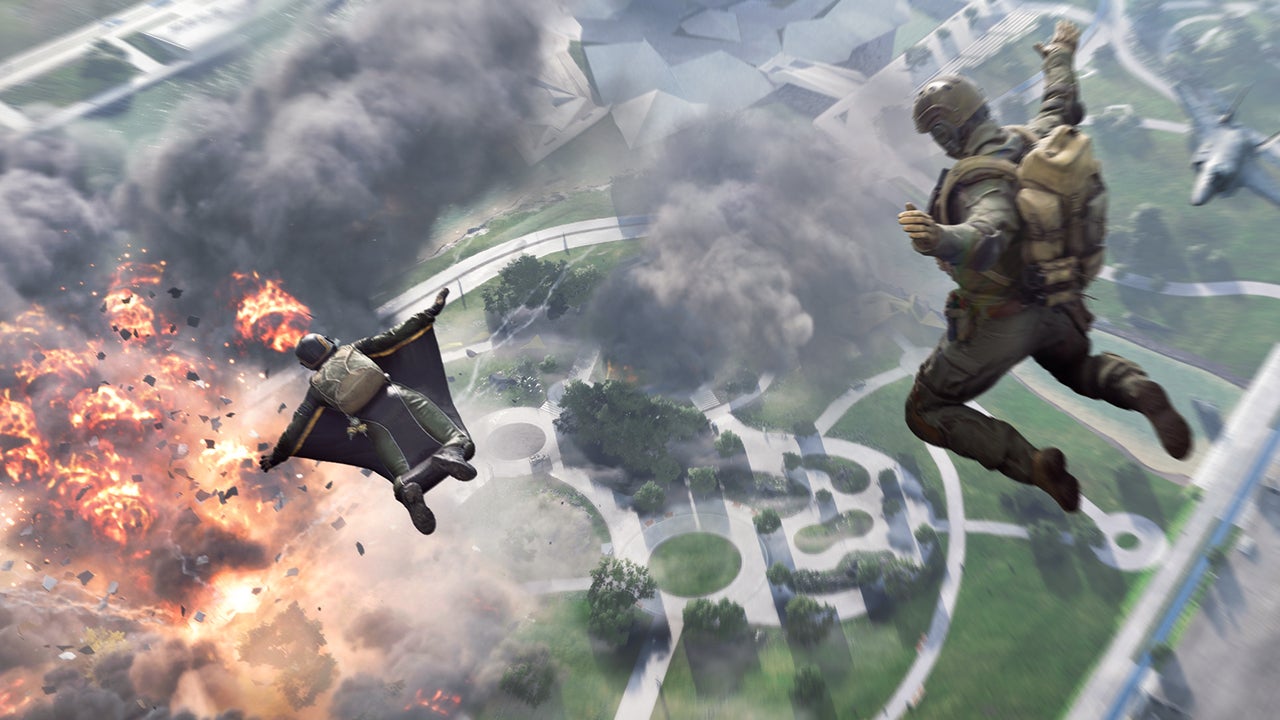 Battlefield 2042 takes the scale of the long-running franchise up a notch and tries to juggle many elements, but does everything click together?

2018’s Battlefield V left a sour taste in veterans’ mouths when post-launch support ended earlier than expected in mid-2020. The core game was good, and will be played for years to come if previous installments are any indication, but everyone agrees that DICE spent way too much time dealing with balance passes and stuff that wasn’t broken in the first place in order to make a small portion of the player base happy. Since EA doesn’t pool nearly as much resources as Activision for the “live service” part of these games, all that tinkering translated into content droughts and an unfocused roadmap that fell way below what was initially promised. With Battlefield 2042, both EA and DICE guaranteed a return to the franchise’s highest point: the BF3/4 era, which hit a perfect balance between competitive FPS gameplay on a massive scale and the series’ sandbox-y identity.

On paper, everything about 2042 sounds great: its setting isn’t modern nor too futuristic, only pushing the action two decades into the future (following the events of BF4, with an intro narrated by the late Michael K. Williams), just enough to set it apart from BF3/4 while retaining the feeling that most diehards claim is the best for Battlefield; it also amplifies large-scale chaos with 128-man matches (64 on last-gen consoles); and a new component called Battlefield Portal brings back remastered content from old games that can be customized and mixed together by players. Additionally, there are neat little changes, such as changing weapon attachments on the go, or clearer progression and customization menus, which were clunky in past Battlefield titles. In many ways, this is DICE’s bravest effort yet, and it mostly pays off, but some design choices feel poorly though out or just plain too conservative after the nice QoL improvements introduced by BF1 and BFV, the latest WWI and WWII entries in the franchise. 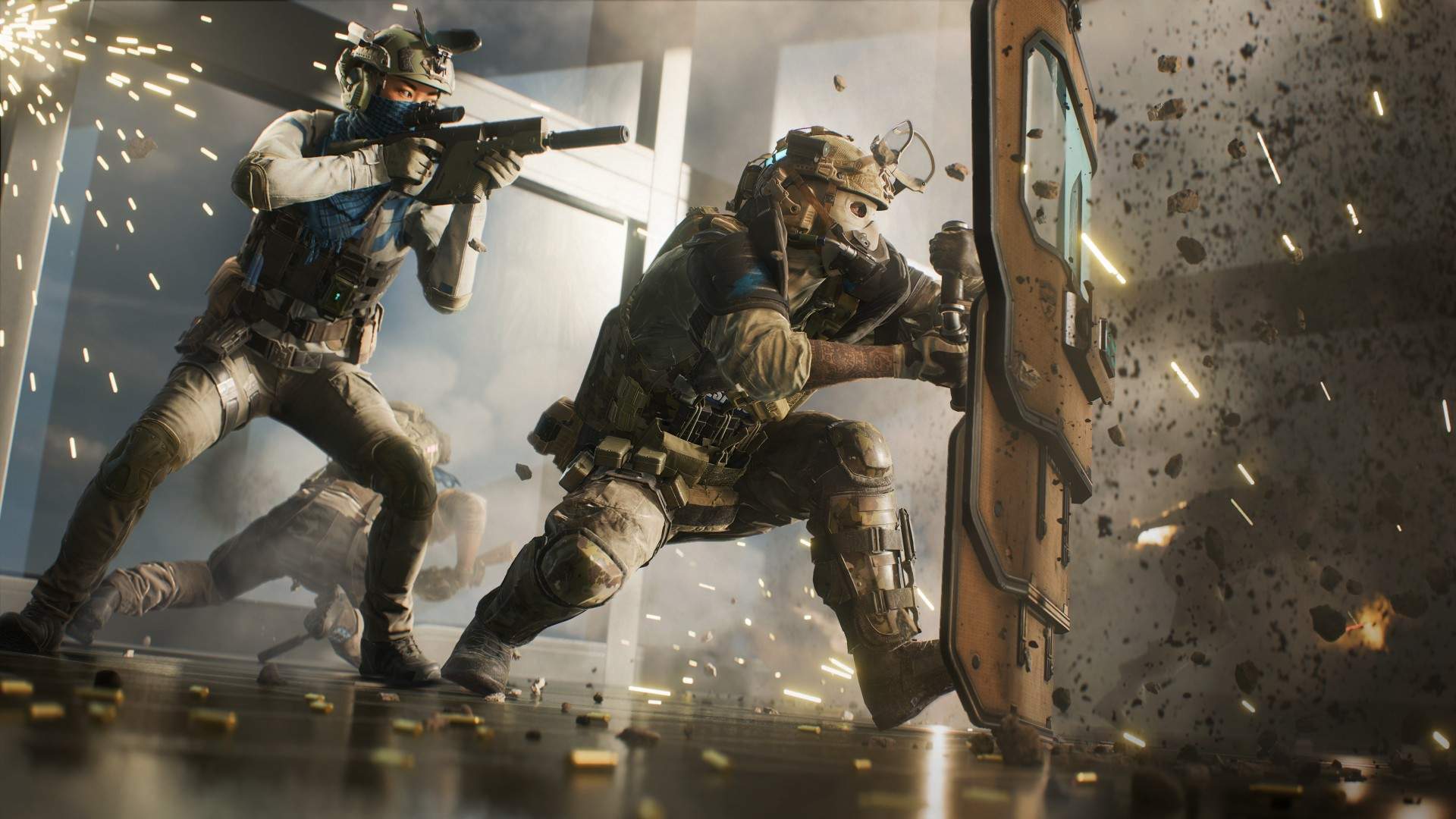 The biggest revision that players will notice from the get-go is the inclusion of Operators, characters with definite identities and backgrounds that pack unique active and passive abilities. They effectively replace the old classes, whose “roles” are kept only in spirit, with all their gadgets spread across the customization menu — DICE wanted to encourage flexibility this time around, but Operators clearly feel like an attempt to vibe with the Rainbow Six and Overwatch crowd. I appreciate the new dimension they bring to squad-building and, above all, using the maps to your advantage, but they also introduce a whole new mess that needs to be balanced out ASAP. At the time of writing, Dozer’s ballistic shield has been disabled because he was a bit too tanky (he literally could tank… tanks). DICE typically doesn’t excel at gun/vehicle balance, and now they’ll also have to deal with this new layer of gameplay. Good luck, I guess.

All-Out Warfare is the main offering in Battlefield 2042 (the single-player story mode has been dropped), and it represents what fans have grown to love over the years: huge maps designed around Conquest and (most recently) Breakthrough. In fact, no other modes are offered at launch for the core experience. DICE basically ignored everything that hasn’t been getting enough attention in recent years, and I can’t blame them. Of course, doubling the player count meant maps needed to be even bigger than usual. And they might be a bit too big… at least for Conquest. Even with 128 players (which can be replaced with AI soldiers) wreaking havoc, the usual flow of matches results in too many people hammering a single sector while smaller squads try to take over other objectives — the maps’ new gargantuan size often isn’t fully utilized, but I also believe this is the players’ fault more than DICE’s, and things could change in the coming weeks, when the community grows accustomed to the new scale and pacing.

Breakthrough fares much better, as its tug-of-war nature limits the action to sectors and groups together both attackers and defenders — my favorite, most intense moments in Battlefield 2042 so far have come from this mode. On top of all that, All-Out Warfare is randomly spiced up with huge tornadoes and other aggressive weather events (yay, climate change) which can reshape entire battles for a while — surprisingly, these dynamic occurrences work as they should (unlike other elements in the game) and create levels of chaos that can’t be found anywhere else. 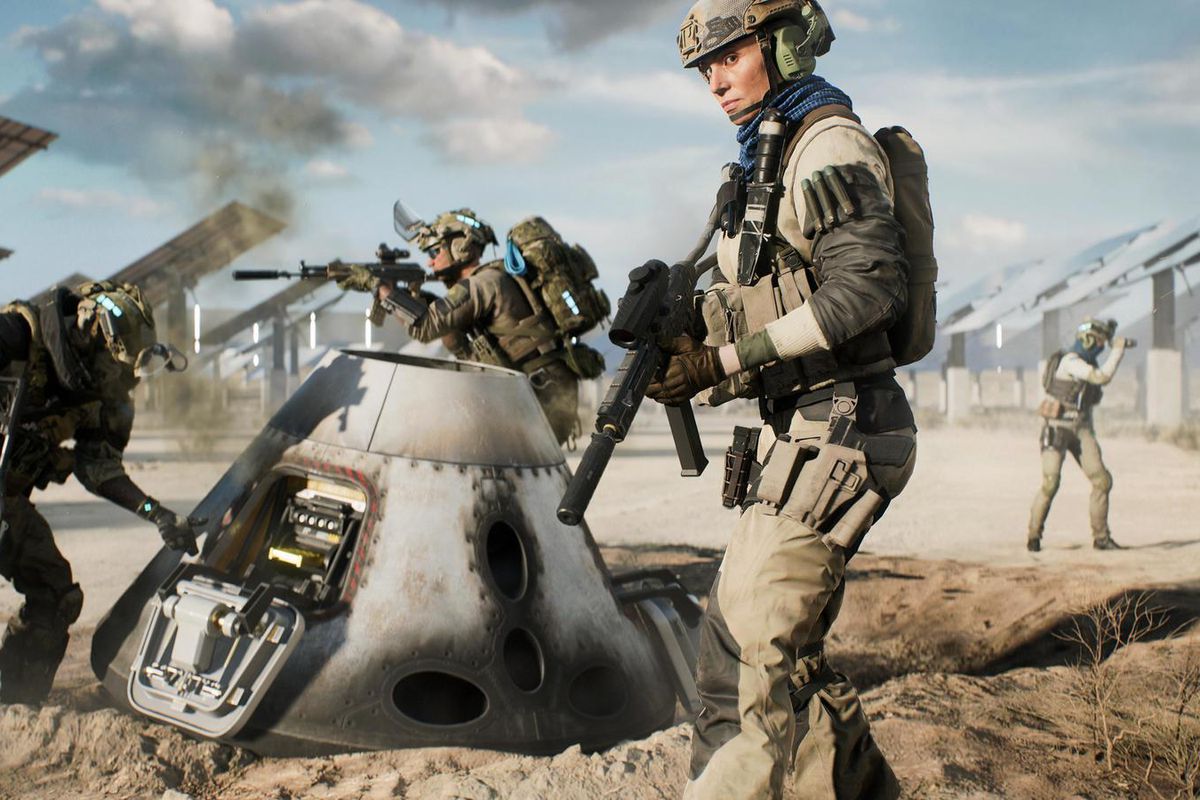 Hazard Zone is DICE’s second attempt cracking the battle royale egg — BFV‘s Firestorm (mostly handled by Criterion Games) was actually solid, but EA refused to make it free-to-play, which in turn made it dead-on-arrival. It’s a focused experience which resembles Escape from Tarkov (you’re tasked with retrieving stuff from a dangerous zone) more than BR games such as Warzone or Apex Legends, but the target audience is the same. All-Out Warfare maps are used for this mode, and that kind of explains their overly massive scale. Operators also make way more sense here than in the core experience. All in all, I feel like Hazard Zone doesn’t really excel at anything. Moreover, the “progression” is kind of unfair for newcomers, as the currency gained from eliminating enemies and successfully extracting data allows good players to start their next game with even more advantages. I’m sure this mode will have its audience for a while, but the devs should rethink some of the core ideas (and maybe make it free-to-play) if the mode wants to survive and remain enticing.

Then there’s Battlefield Portal, which I firmly believe will be many veterans’ favorite part of the Battlefield 2042 package — at launch, content from Battlefield 1942, Bad Company 2, and 3 has been brought back. That includes classic character classes, all weapons and gadgets from their respective games, maps (six so far), rulesets, and old-school gameplay. Of course, all content from Battlefield 2042 is present as well. It’s an impressive sandbox with plenty of settings and customization available to all players, who can create, host, and play custom games as silly as one tank vs. 20 small robots, or a massive knives vs. defibrillators melee. Furthermore, DICE and Ripple Effect (formerly DICE LA) will curate an “official rotation” of the best modes crafted by creators, plus classic experiences lifted straight from the older games, with more Battlefield installments joining the collection later down the line. It appears that post-launch content will put a special emphasis on Portal, so longtime fans can expect plenty of legendary maps (and other pieces of content) to make a comeback looking better than ever. And yes, you can mix all different eras and content; it’s like a giant explosive toybox. 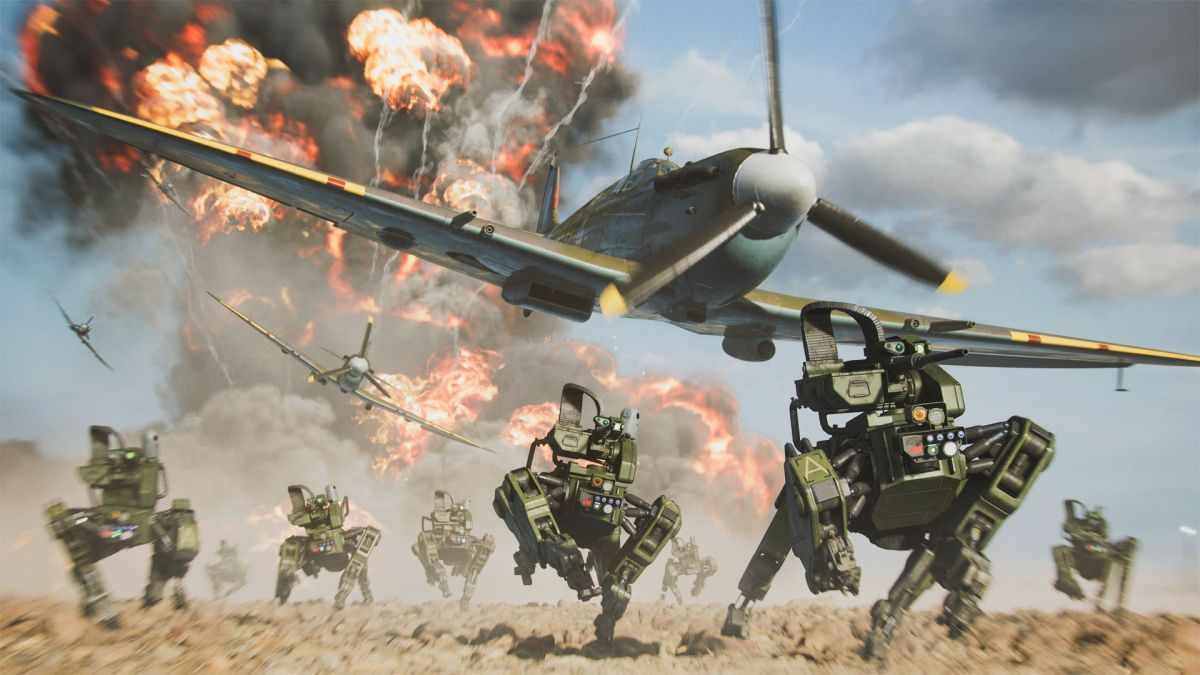 While Xbox Series X/S and PC players are reporting performance and stability problems, my experience with the PS5 version of the game, which targets 4K and 60 FPS (with small but noticeable drops during the most hectic moments), has been smooth so far. And yes, as always expected from DICE, the game looks and sounds stunning — audio mixes can be a bit muffled at times though. After a disastrous open beta, I was expecting the worst regarding performance and graphical issues, but only EA’s servers have been truly acting up during the early access period that started last week. However, plenty of gameplay-related bugs and glitches can be found during a single session — Battlefield 2042 isn’t broken, but it’s lacking polish, weapon buffs, vehicle nerfs, and a big balance pass, so maybe it should’ve dropped next spring instead. Minor annoyances start to pile up, eventually souring part of the fun (a lot) I’m having with this installment. By the way, I wouldn’t worry about the player base too much, as DICE has finally embraced cross-play and cross-progression, with only PS4 and One being left aside (they cannot handle 128 players nor the full maps).

Post-launch content will arrive through four seasons of free content per year, delivering new Operators, maps, weapons, and gadgets to all modes. Battle passes (both free and paid) will add more progression on top of the base game’s, unlocking cosmetic rewards and more challenges for players to tackle. Basically, EA, DICE, and Ripple Effect are sticking closely to what has worked for Respawn’s Apex Legends and Activision’s yearly Call of Duty behemoths. Let’s just hope the “live service” is more focused and constant this time around.

If you can get past the rough edges and wonky servers at launch, this is a recommend for anyone into big military shooters and, particularly, longtime Battlefield fans. Gamers with too much on their plates right now and more casual players should wait a couple of months at least, as it feels like Battlefield 2042 is only just now entering the beta testing period despite hitting the launch button later this week. There’s a great game at its core, and Portal is the best secondary offering the series has put out yet, but we’re facing another Battlefield 4 situation (shaky netcode included) where the product simply needs more time in the oven. I’m also left wondering about some odd decisions such as the removal of BFV‘s mobility improvements or the return to a higher time-to-kill, so I wouldn’t be surprised if DICE rethinks some mechanics moving forward.

Battlefield 2042 is now available on PC (Origin, Steam, and Epic), PS4/5, and Xbox consoles through early access for Gold/Ultimate editions of the game, plus EA Play subscriptions. The official launch date is November 19.

Thanks to EA and fortyseven communications for the PS5 review code.