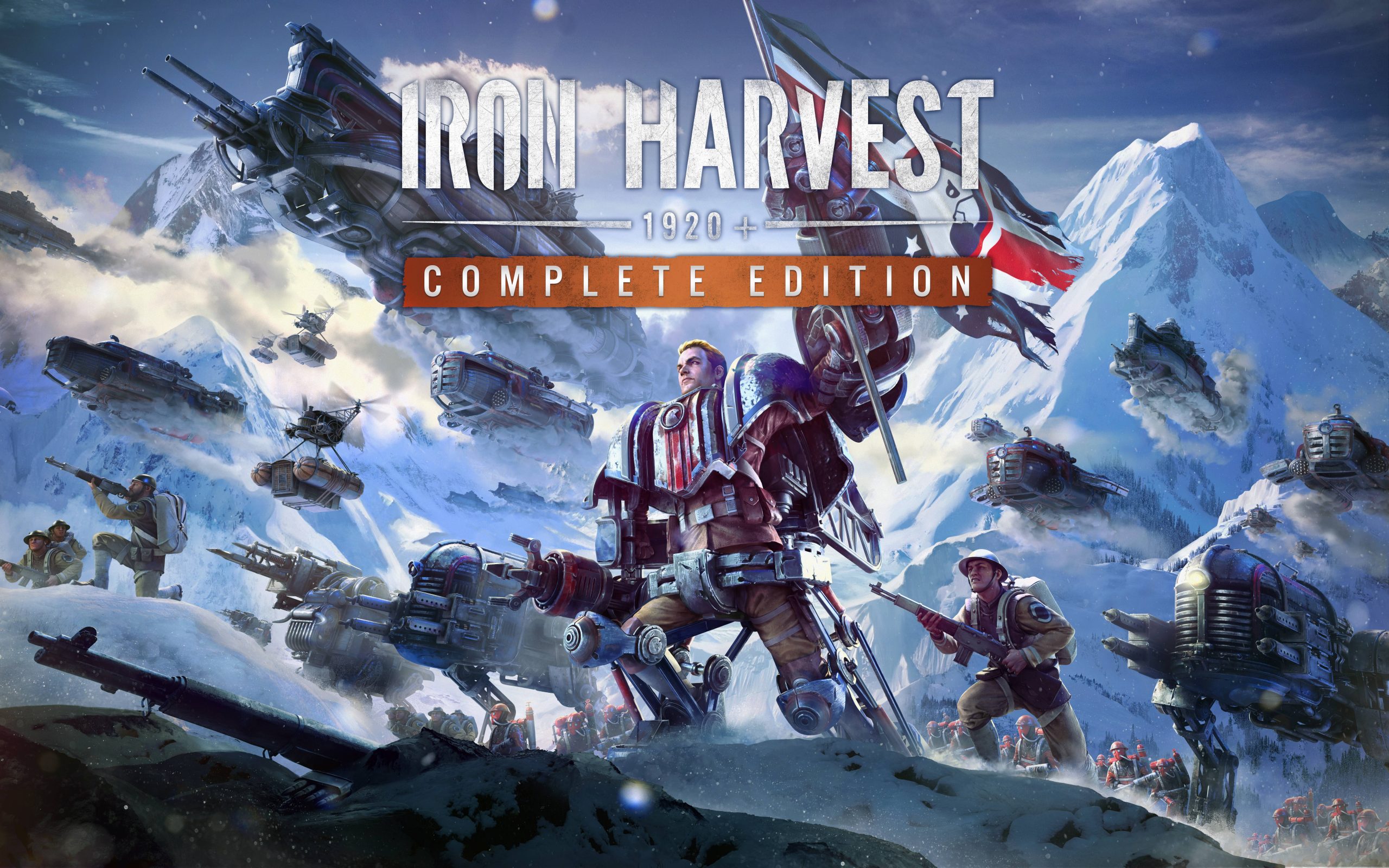 It’s been more than a year since Iron Harvest fully launched on PC, and now it’s bringing war to consoles.

After a highly successful Kickstarter campaign, German video game developer KING Art Games started full-blown development on Iron Harvest, a dream project for the team; the selling point was to bring rudimentary mechs into a post-WWI setting, effectively creating an alternate timeline with abundant possibilities for a real-time strategy title. RTS fanatics gladly welcomed this premise, as the genre had been mostly stagnant ever since Blizzard’s StarCraft II came out in 2010.

Hype surrounding Iron Harvest was high, and both the pre-launch betas and the final release hit remarkable player numbers, yet the reception wasn’t super-positive overall. I personally didn’t vibe nearly as much as I wanted to with the original PC release for a variety of reasons — this year’s port for next-gen consoles, which packs under its “Complete Edition” banner all previous expansion packs and further enhancements, fixes some of the game’s more glaring issues, but also highlights its deep-rooted shortcomings. 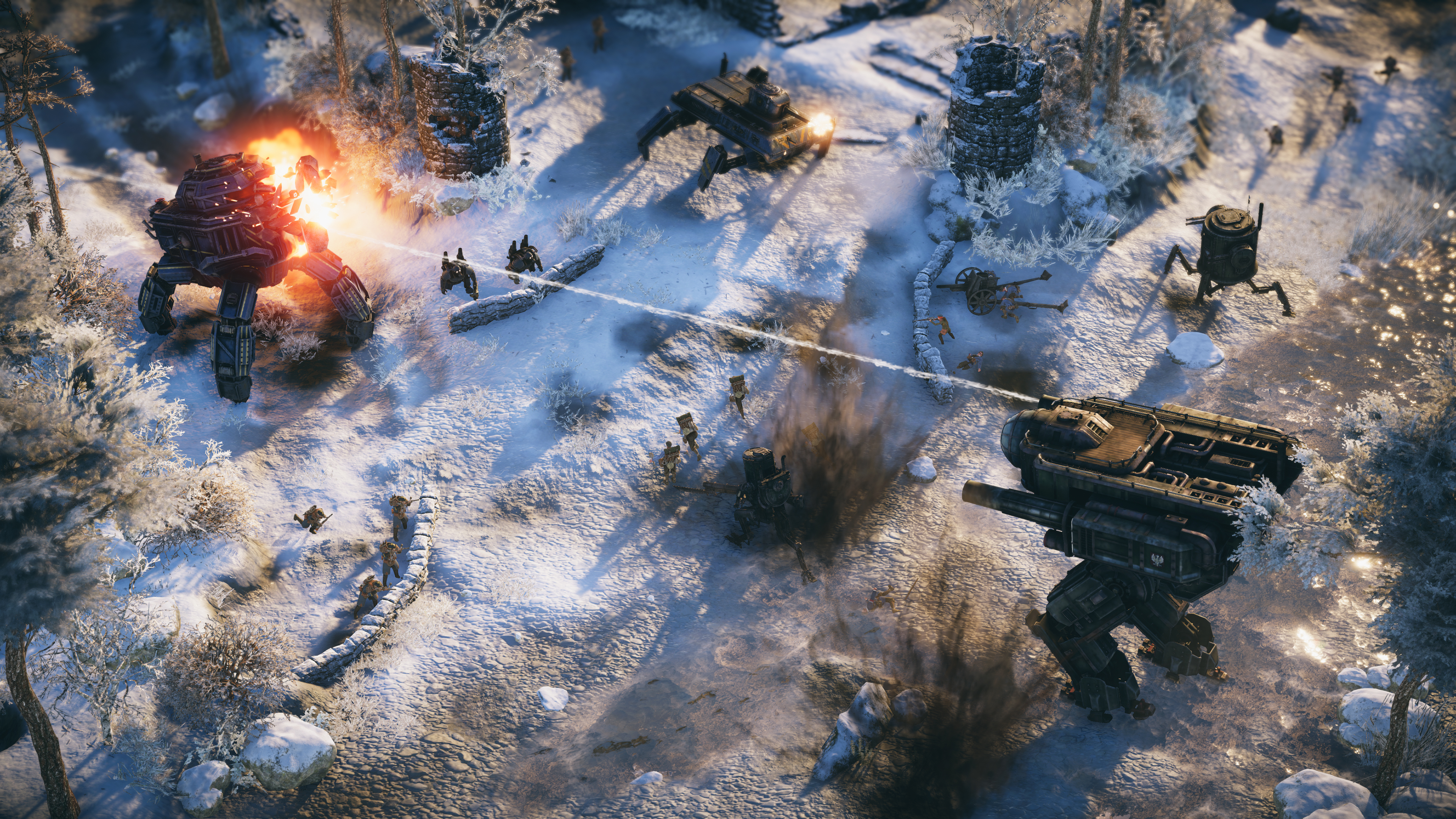 Surprisingly, Iron Harvest takes its storytelling and worldbuilding very seriously — there are three campaigns which hail from the base game, each centered around a different faction in the next Great War the world faces after a brief post-WWI period of scientific and technological innovation. Furthermore, the main characters are well-defined and bring both unique points of view to the story and interesting abilities to the gameplay. The learning curve is also quite smooth; RTS typically throw lots of information at players early on before promptly throwing them to the wolves, but that isn’t a problem here.

I personally recommend beating at least the first campaign before jumping into the multiplayer offering or offline skirmishes, as it’s a well-paced set of missions with enough variety of scenarios to help most players prepare for the ruthless, fast-paced battles that await outside the campaigns. Mind you, the campaigns also get intense, but having clear goals in order to hit the next chapter in an engrossing story definitely helps plow through enemy armies and bases. 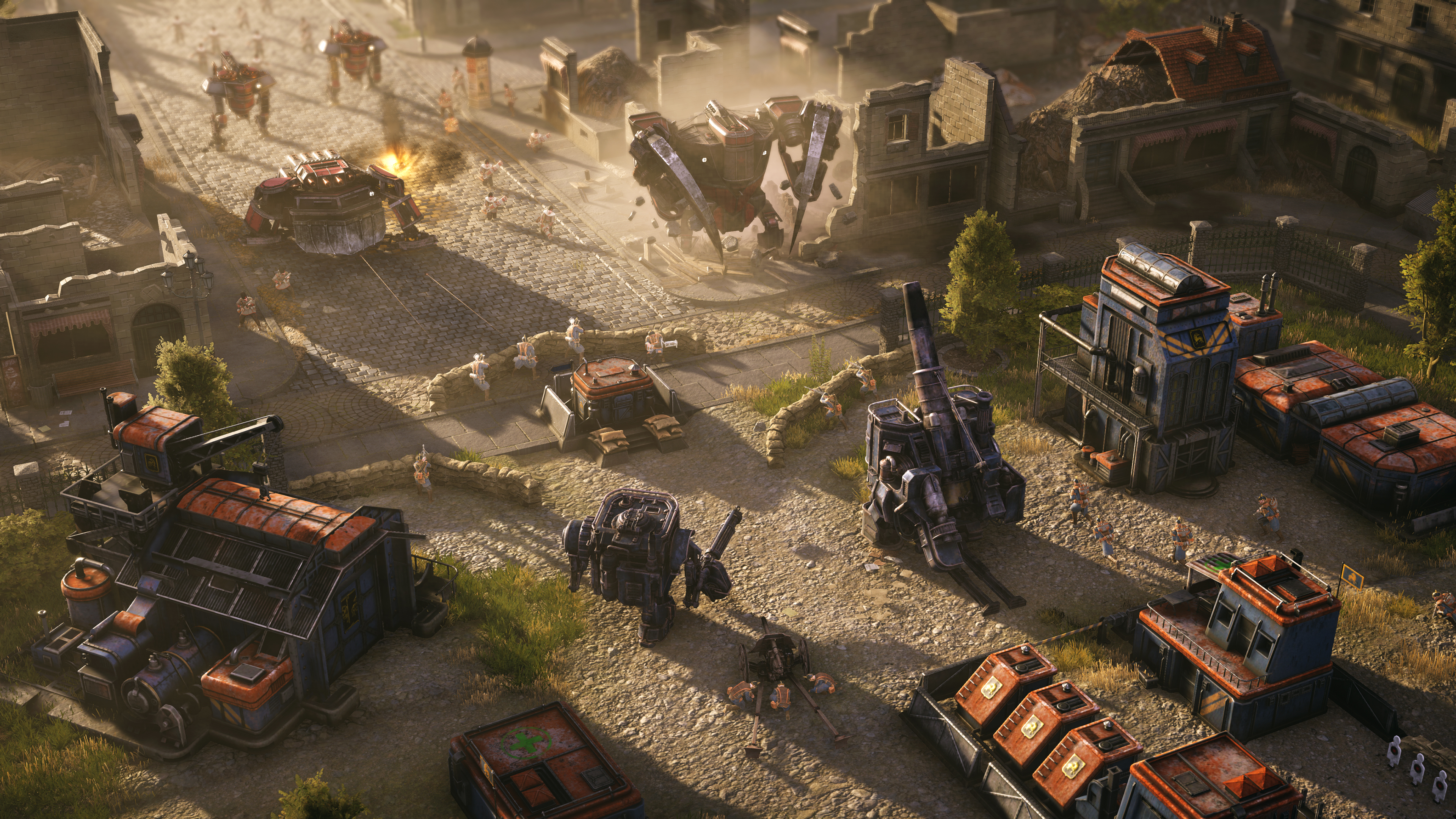 Base-building fanatics won’t find much to love in Iron Harvest, as the game focuses mainly on staying mobile with groups of troops and mechs which evolve over the course of missions/matches and can (and should) take advantage of their surroundings to maximize chances of survival and success. Smartly positioning units and using the environments is as important to achieve victory as optimizing the production of resources and troops — the latter systems aren’t especially deep, but can’t be ignored.

If you need a comparison, I’d say Iron Harvest closely resembles the Company of Heroes titles (Relic Entertainment), which did include a bit of base-building and defending key positions, but asked players to quickly take control of the maps in a “tug of war” of sorts. Likewise, the game reminds me of Relic’s WH40K: Dawn of War (the first one) in many ways, although that title packed a substantial amount of building. One way or another, KING Art Games’ influences are very clear. 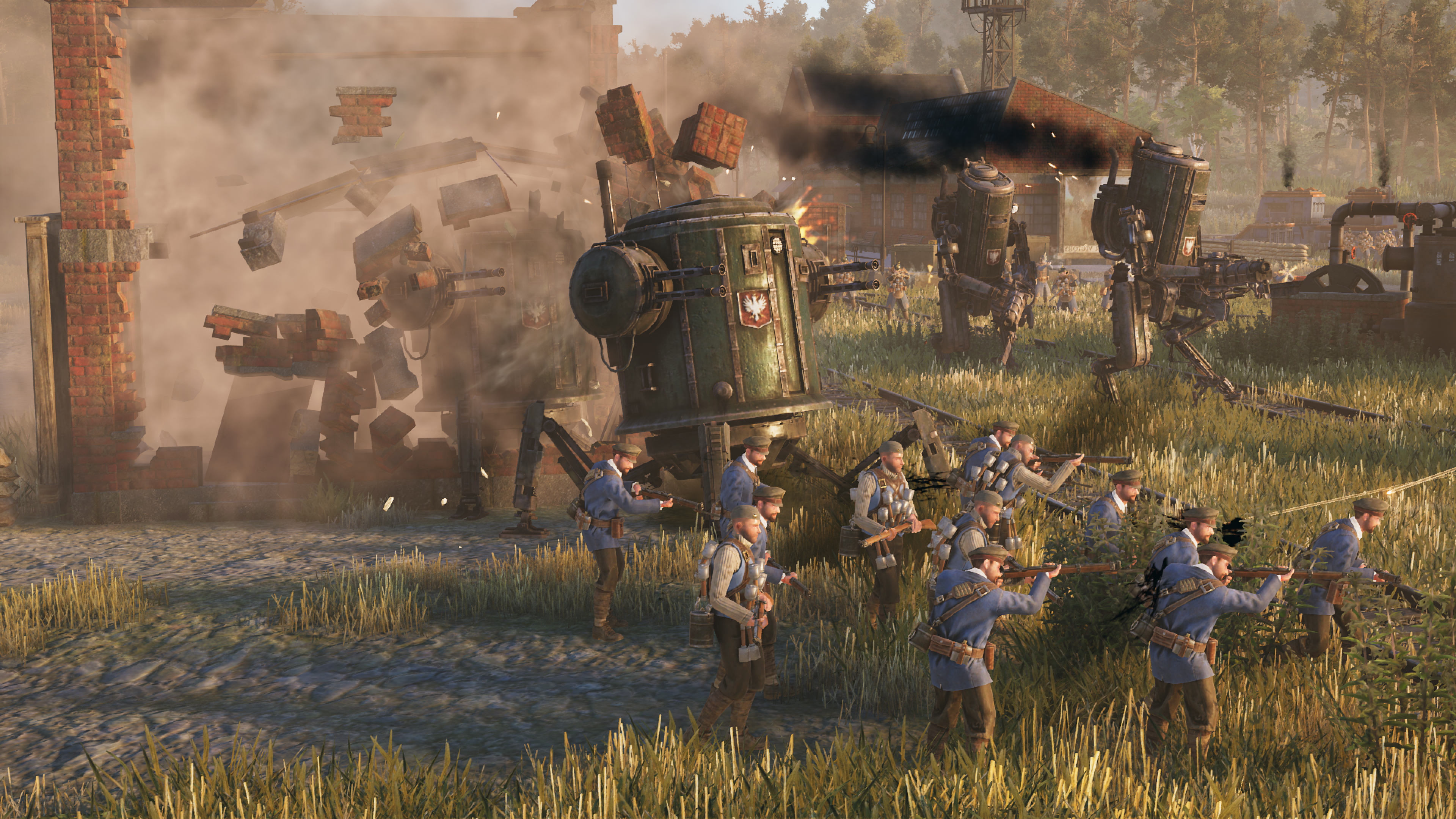 Overall, I’d say that Iron Harvest is fun to play and that its formula is tight enough to provide short bursts of competitive multiplayer thrills. Moreover, the campaigns are solid, and the controls have been adapted surprisingly well for gamepads, though they don’t match the agility of mouse + keyboard on PC. However, even after two solid expansion packs, I believe the game barely scratches the gameplay possibilities this unique setting puts on the table — everything plays like it would in Company of Heroes or Dawn of War, and the inclusion of mechs doesn’t shake things up significantly. On top of that, focusing on mech production in multiplayer matches isn’t the safest way to victory, and rushing with cheaper human units usually yields better results than saving up to build a terrifying (and slower) mechanical army. And that kind of undermines the main appeal of Iron Harvest, doesn’t it?

Secondly, the port for next-gen consoles isn’t very good and feels barebones; PS5 and Xbox Series X/S are able to run the game smoothly, and load times are barely noticeable, yet the game’s engine clearly hasn’t been tinkered with nearly enough to truly take advantage of the newest hardware — frames can seemingly hit the magical 60 number, but FPS are quickly brought down when changing the camera angle and leaving the default isometric view. I think it has something to do with the game barely using LOD techniques (if at all), since players are normally supposed to be looking at a fraction of the entire map from a top-down view. Iffy performance was already a problem with the PC version (the game doesn’t even look that good), and of course that has been brought over with little to no adjustments made; different Quality/Performance modes aren’t offered either, which is disappointing and puts this port way below other recent medium-sized releases, let alone triple-A titles. 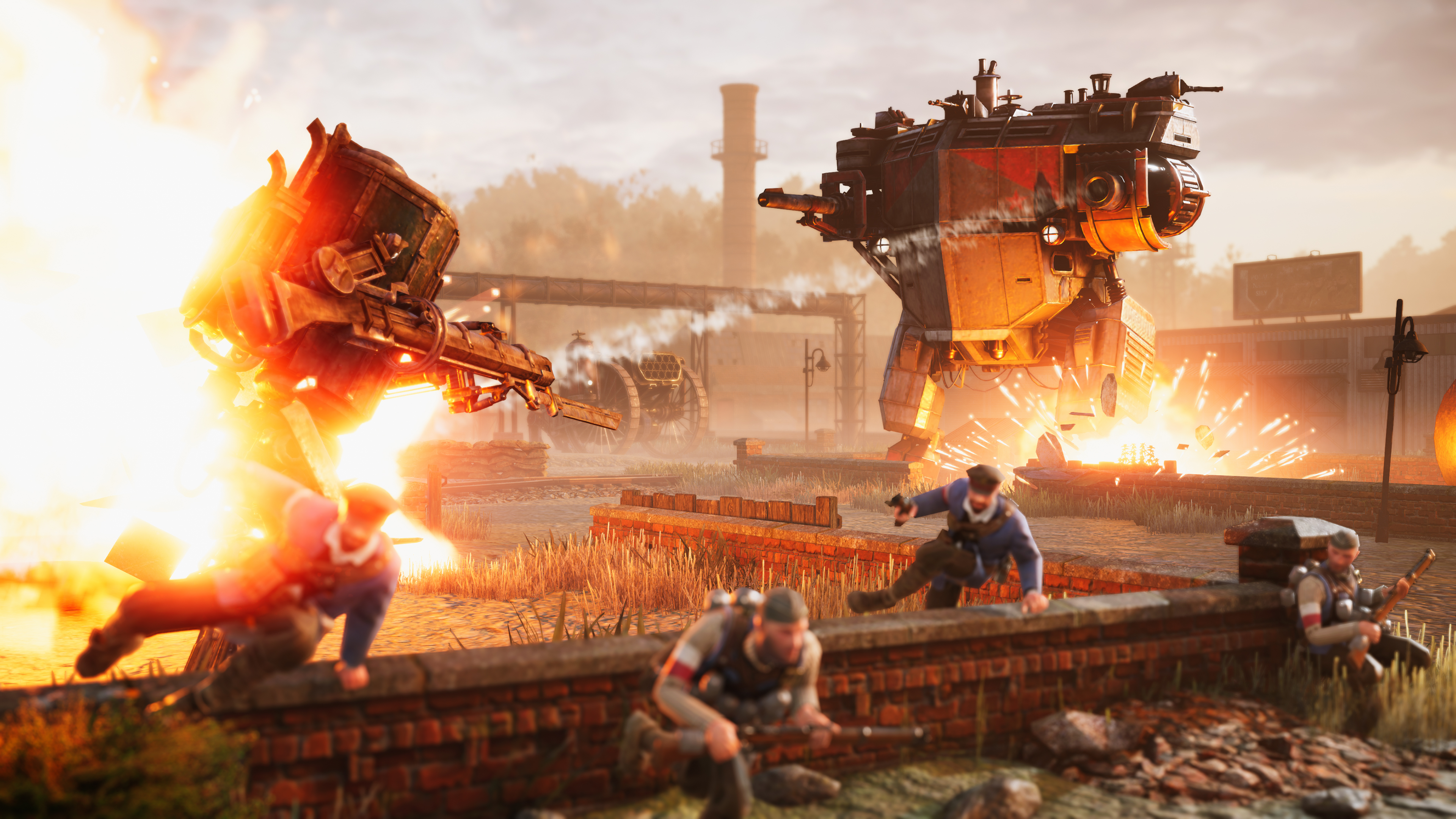 All in all, Iron Harvest 1920+ Complete Edition packs more than enough content and gritty RTS fun to please console gamers who were longing for a competitive strategy title. More importantly, the game plays surprisingly well with a controller (a feature that will arrive on PC soon), and has a fair amount of unlockables to show off while facing against other players online. Sadly, the port itself feels undercooked, and some conflicts within the game’s essential philosophy and gameplay mechanics remain predictably unresolved, as reworking those elements would mean starting from scratch with a sequel. My personal recommendation is not to treat Iron Harvest like a real-time strategy heavyweight, because it’s clearly content with simply offering a different playground of destruction.

Iron Harvest 1920+ Complete Edition is now available on PC (Steam, GOG, and Epic), PS5, and Xbox Series X/S. PS4 and Xbox One ports are planned, but haven’t locked a release date yet.

Thanks to Prime Matter and Tinsley PR for the PS5 review code.