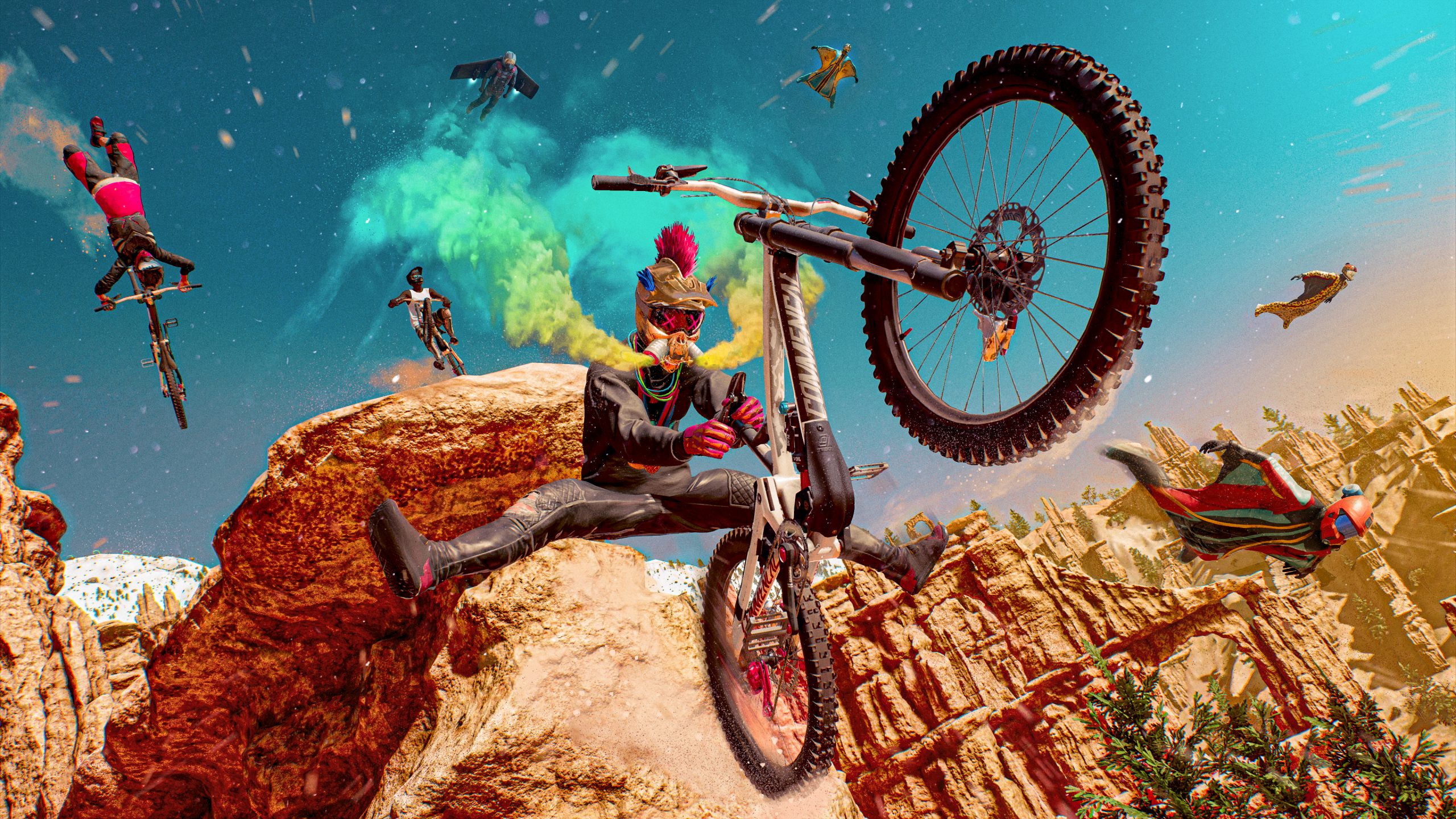 Riders Republic is one of the year’s most off-beat major game releases, and we’re glad to report it’s extremely fun too.

There was a time when extreme sports video games made a killing and arrived on a yearly basis. I was never too big on them (or sports in general), but they always felt like refreshing breaks from action and strategy games, my jam during childhood years. SSX and Tony Hawk titles? Good stuff despite the fact I didn’t care for the real-life sports they replicated.

In 2016, Ubisoft tried their luck with Steep, a title focusing on the most famous extreme sports that could be practiced in a snowy setting: skiing, snowboarding, paragliding, and wingsuits. It did well with critics and fanatics of this type of games, but a lackluster marketing campaign and a steep learning curve (pun intended) completely shot the game’s future down. Its post-launch support was solid, but fundamental changes were needed in order to make a sequel or spiritual successor of sorts more accessible. Well, Riders Republic completely erases that problem. 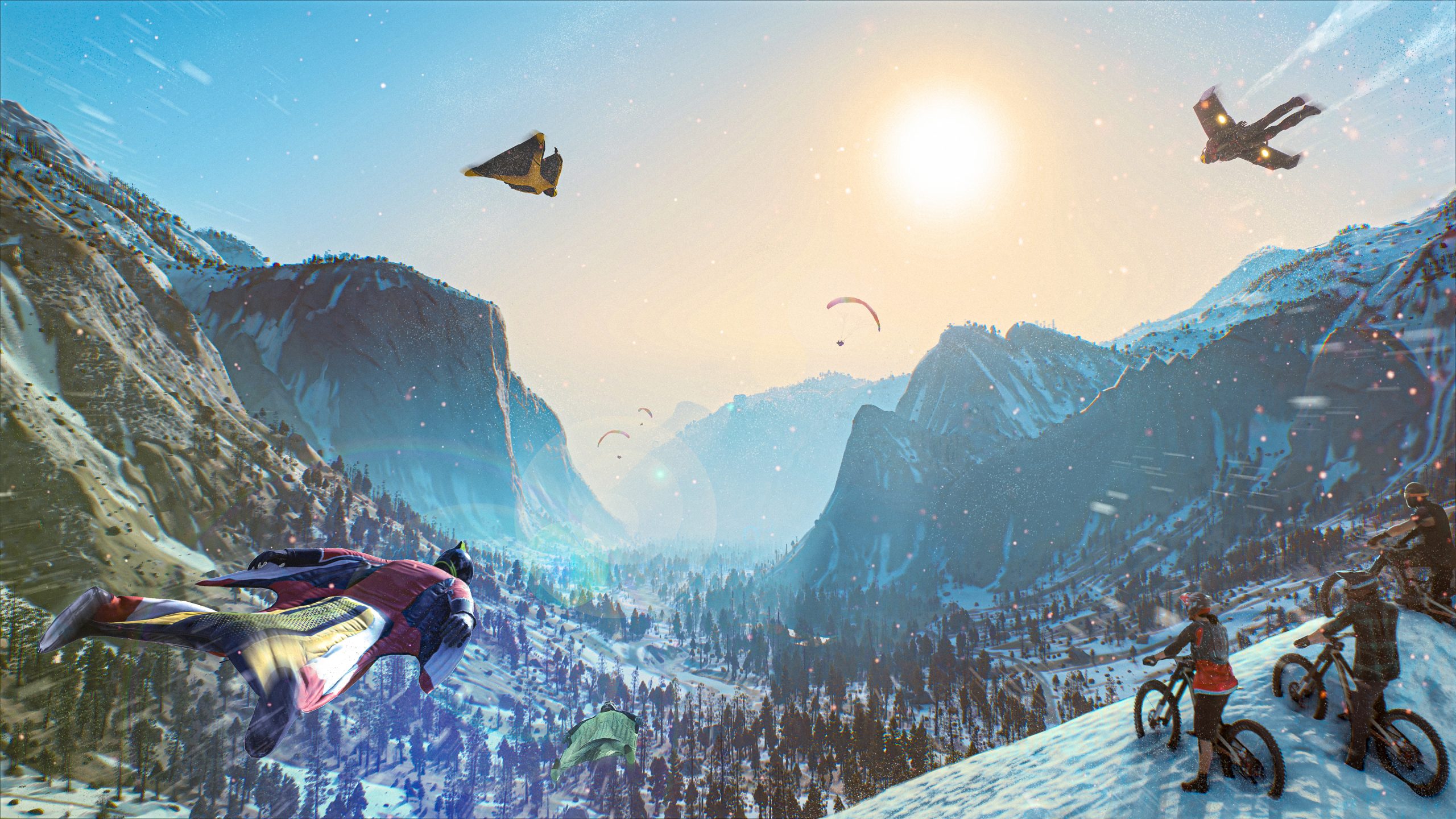 Ubisoft hit the ground running last year with the announcement trailer of Riders Republic, which was fast, colorful, and exciting. Even people who weren’t into sports games felt attracted by its promise of a massive playground and a truckload of different activities. Fast-forward to October 2021, and tons of players are checking out the game thanks a meaty open beta in August and a generous early “open” access week ahead of the October 28 launch. The game’s biggest success so far is letting casual players know it exists. Thankfully, it’s also pretty damn good.

Riders Republic main objective is to make everyone have tons of fun. It’s a really straightforward and accessible experience that doesn’t hide its biggest weapons for too long, and lets players know early on that it’s chock-full of cool gameplay ideas and an absurd amount of content. One of my biggest gripes with the open beta was that the game held my hand for too long and funneled me through two or three hours of specific races and trials; that isn’t problem in the final release, which still provides plenty of information and teaches players everything they need to know before setting them loose, but hits the brakes soon and lets everyone do their thing before becoming tiresome.

This time around, the group of Ubisoft studios behind the project took explicit inspiration from the Forza Horizon racing games (not developed nor published by Ubisoft), which offer deep, authentic experiences and open worlds that feel very welcoming at the same time. The user interfaces, menus, and overall structure are all there; Riders Republic proudly wears its influences on its sleeve, and I’m glad it does so. Moving around the gorgeous natural environments of the Republic always feels smooth and breezy, and it’s always-online world (also populated with countless ghosts that mimic real players) makes the overall experience feel truly alive and full of unique possibilities.

Much like in the Forza Horizon titles, progression is non-linear but constant. Each sports career (bike races, bike tricks, snow races, snow tricks, air sports) has its own structure, evolution, and set of races/trials/events, but they all count towards a unified advance through the Republic’s leagues and ranks. On top of that, online seasons (against other players), sponsors, and regular ranked modes add even more grinding and progression. And you’ll be unlocking new equipment and rewards at every corner — Riders Republic feels anything but barebones. Post-launch plans are looking solid too, with paid passes only offering additional cosmetics and early access to playable content that will be free for everyone. By the way, in-game currency is abundant through regular play, and there’s always something cool to pick up in the game’s rotating store. 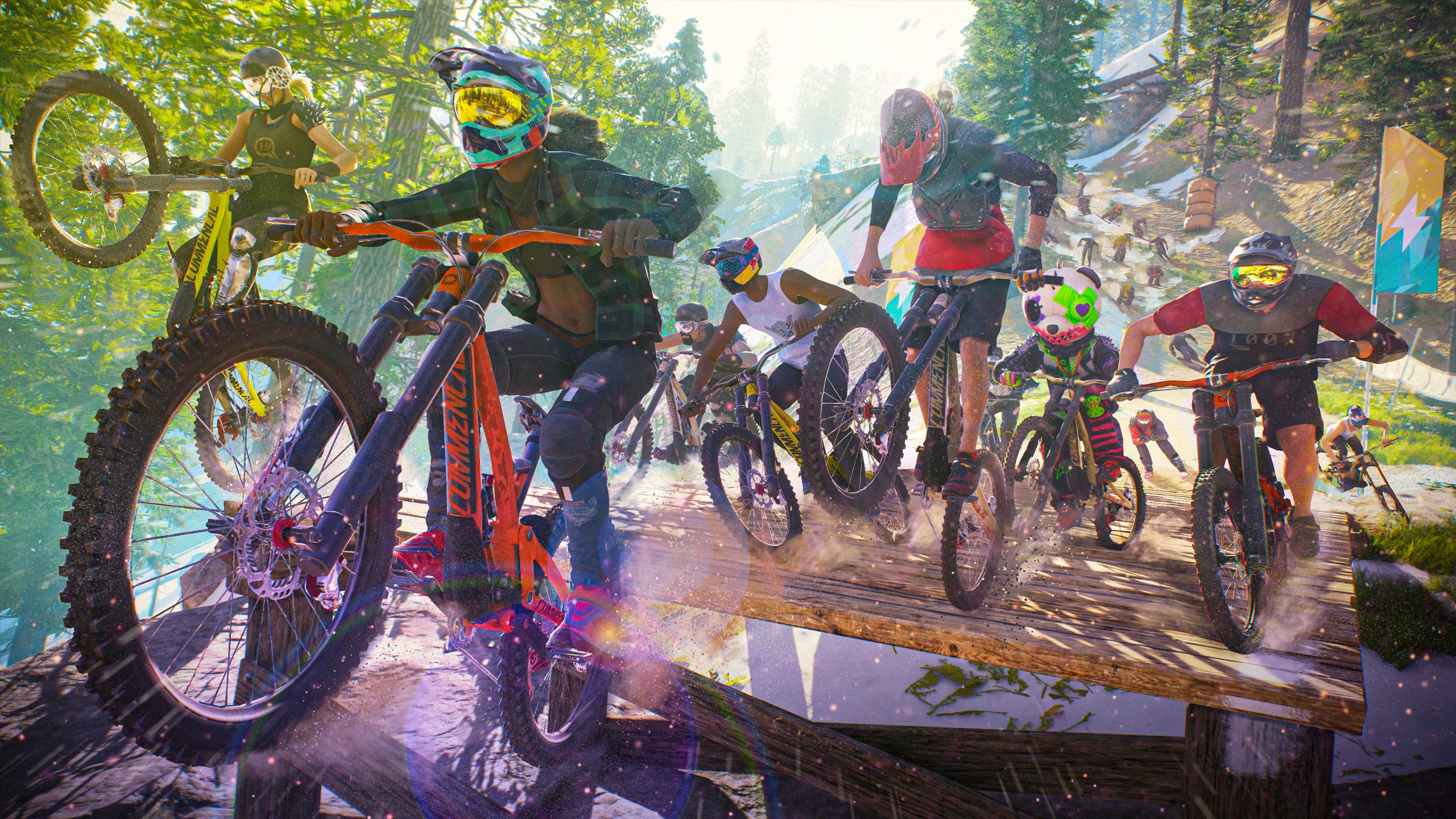 With such a wide selection of sports (which could grow even bigger in the future), one has to wonder whether all of them are equally enjoyable. Well, in my humble opinion, they all feel fleshed out and unique, and the most surprising thing is they even play well together. Oh yeah, multi-round Mass Races (of up to 64 players) consist of more than one sport and are easily Riders Republic‘s standout activity. There’s nothing out there like them right now.

The controls are easy to pick up, too. The hardcore crowd may claim the game’s too undemanding, but devs thought of that and threw in a fair amount of customization options so every player can adjust their experience. Moreover, playing on higher difficulties and/or using more complex schemes for the controls and tricks yields better XP rewards, and crosses some challenges off the list — Riders Republic actively encourages riders to get better and try to overcome obstacles, but the entry bar is low, and that may very well be its path to widespread success.

For the most part, movement feels weighty and exists in the vast zone between “realistic simulation” and “completely arcade.” Couple that with the excellent first-person view (which I highly recommend), and you’ll be fully immersed in no time. Movement in extreme sports video games has rarely felt more fun and fluid — a “Zen Mode” completely devoid of races and trials can be accessed through the main menu as well. Simply exploring the Republic and taking some pictures can be as rewarding as climbing up the ranks.

The biggest turn-off, albeit one that can be easily ignored, is how terribly hard the game tries to be hip and rad. You know, this is a problem that affects countless triple-A game releases nowadays — humongous companies telling its customers how down-to-earth and cool they are through aesthetic and narrative choices which too often come off as insincere and cringy. Riders Republic is sadly deep-fried in that stuff, and its characters (and their incessant ramblings) feel like parents trying to connect with their offsprings by putting random expressions together, acting cool, and then failing miserably. You cannot get rid of many dialogues through certain trials and events, but you can certainly skip numerous cutscenes that won’t unpack anything which tutorials and pop-ups don’t. Trust me, it’s for the best. 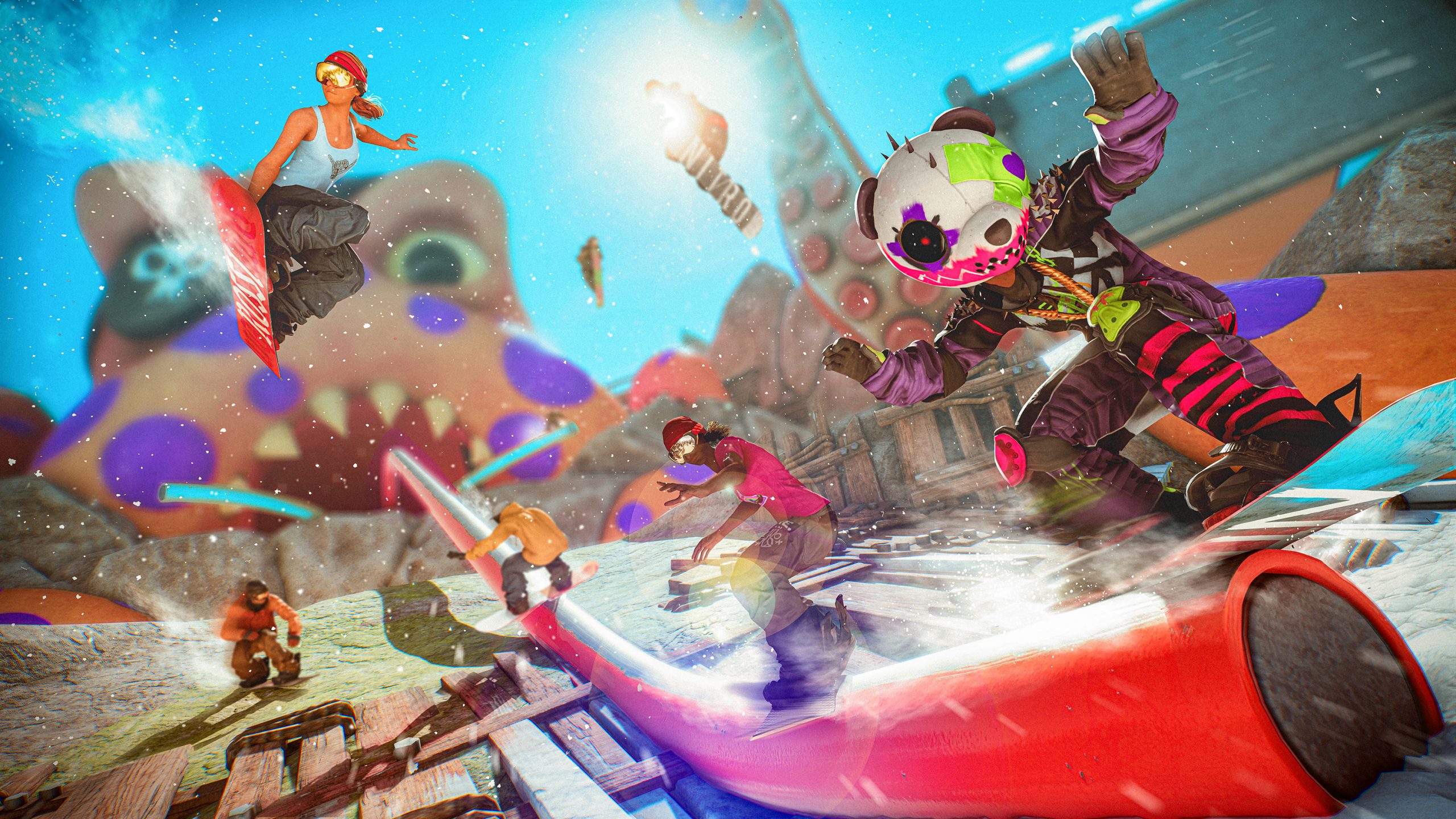 The overall presentation doesn’t feel next-gen (because it’s not a next-gen title), but Riders Republic‘s massive open world contains some of the most beautiful natural locales I’ve seen in a video game. A clear and striking art direction makes the game pleasing to look at and (more importantly) readable at high speeds. The sound design also gets the job done, but more essential to the experience is the collection of original songs (the team 100% knew what subgenres to pick from) that instantly brought me back to the 2000s golden age of extreme sports games.

Performance on my modest gaming PC (by 2021 standards) was solid, running the game on Ultra settings at 1080p with a 30 FPS cap that feels smoother than many titles at 60 FPS. I landed exactly on the Recommended requirements for 1080/30, which are pretty tame. Newer hardware easily crushes Riders Republic at higher framerates and/or 2K/4K resolutions, and so do the next-gen consoles. PS4 and One versions have been released as well, but they’re not optimal according to Ubisoft (huh) and have to work with smaller player counts. That being said, all platforms (including Stadia and Luna) can play together thanks to a very robust cross-play foundation — it’s been one of the smoothest online-heavy launches I’ve experienced recently. Furthermore, cross-progression is also available thanks to Ubisoft’s own infrastructure.

It appears that Riders Republic is resonating with gamers in a bigger way than Steep ever did, and I’m glad that’s the case, as I strongly believe it’s one of the freshest triple-A releases we’ve had in a while, especially if we consider how hard Ubisoft is leaning on already established IPs at the moment. Let’s hope the Republic lives on for a few years.

Thanks to Ubisoft for the PC review code.