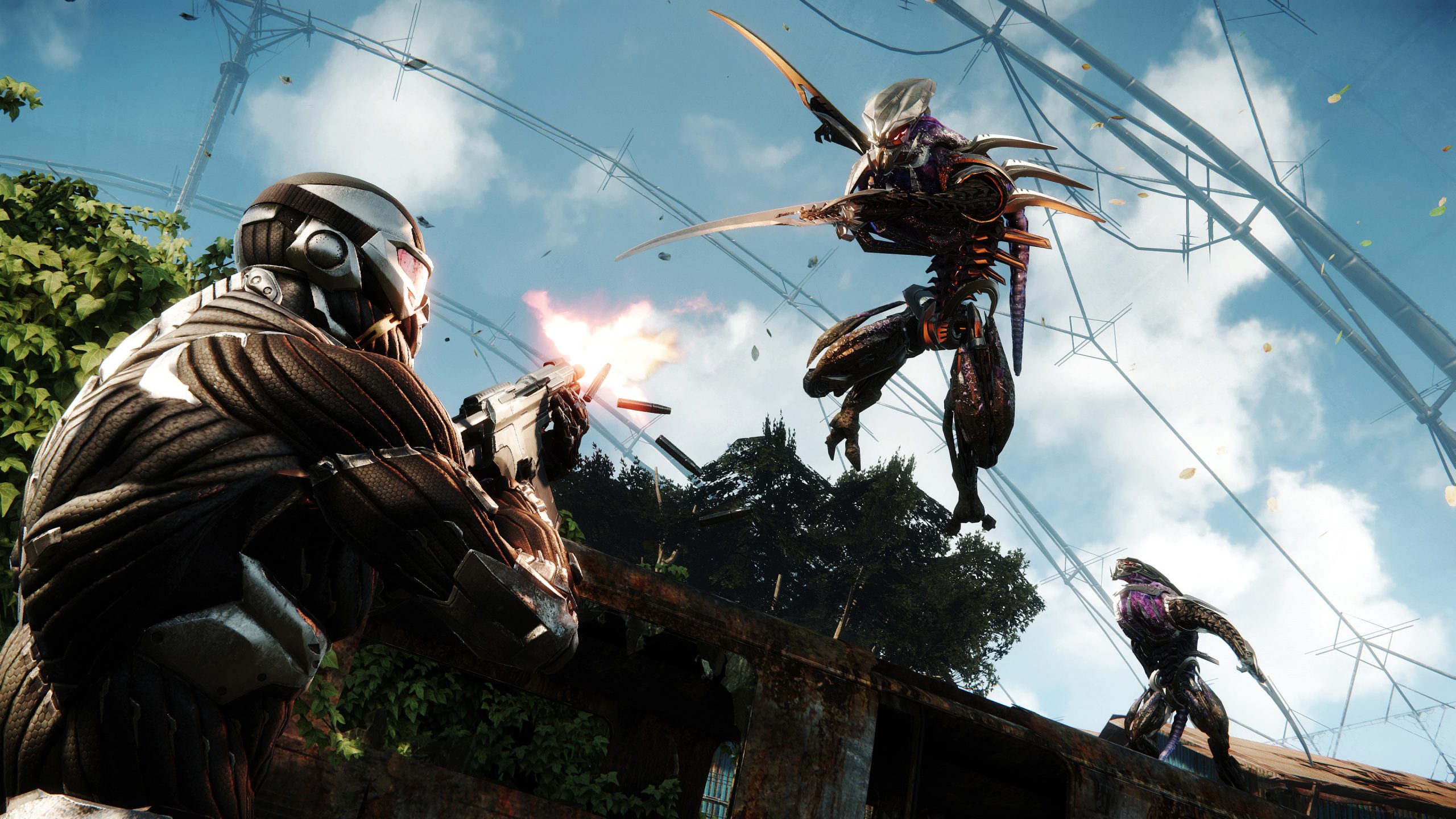 Your opportunity to smoothly blast through all three Crysis games is here.

Originally released in 2007 by Electronic Arts, Crysis was an insurmountable achievement in graphics technology. It was light years ahead of anything on PC and set a new benchmark that hardware took a while to truly figure out — running it wasn’t especially hard, but running it at the highest settings at 1080p or above was another story. Even with powerful hardware that could bruteforce through it, the original game has proven to be a tough nut to crack for years, since it was optimized for single-threaded CPU processing, which means the super-awesome processors that are common nowadays still have trouble milking Crytek’s almost 15-year-old version of the CryEngine tech.

These issues persisted in last year’s Crysis Remastered, developed by Saber Interactive, the folks behind surprise hit World War Z, Quake Champions, and several ports/remasters. They had the experience to deliver a nice-looking and smooth upgrade, yet that remaster, which largely remains the same in this Remastered Trilogy, is greatly limited by the fact it’s based on the ancient PS3/360 ports of the game. The overall experience is good, especially on next-gen consoles, which can go above the performance and maximum resolution found in the PS4/One families, but you can tell the code and renderer needed a finer rework in order to deliver more stable framerates and visuals which come close to the top tier graphical settings of Crysis on PC. 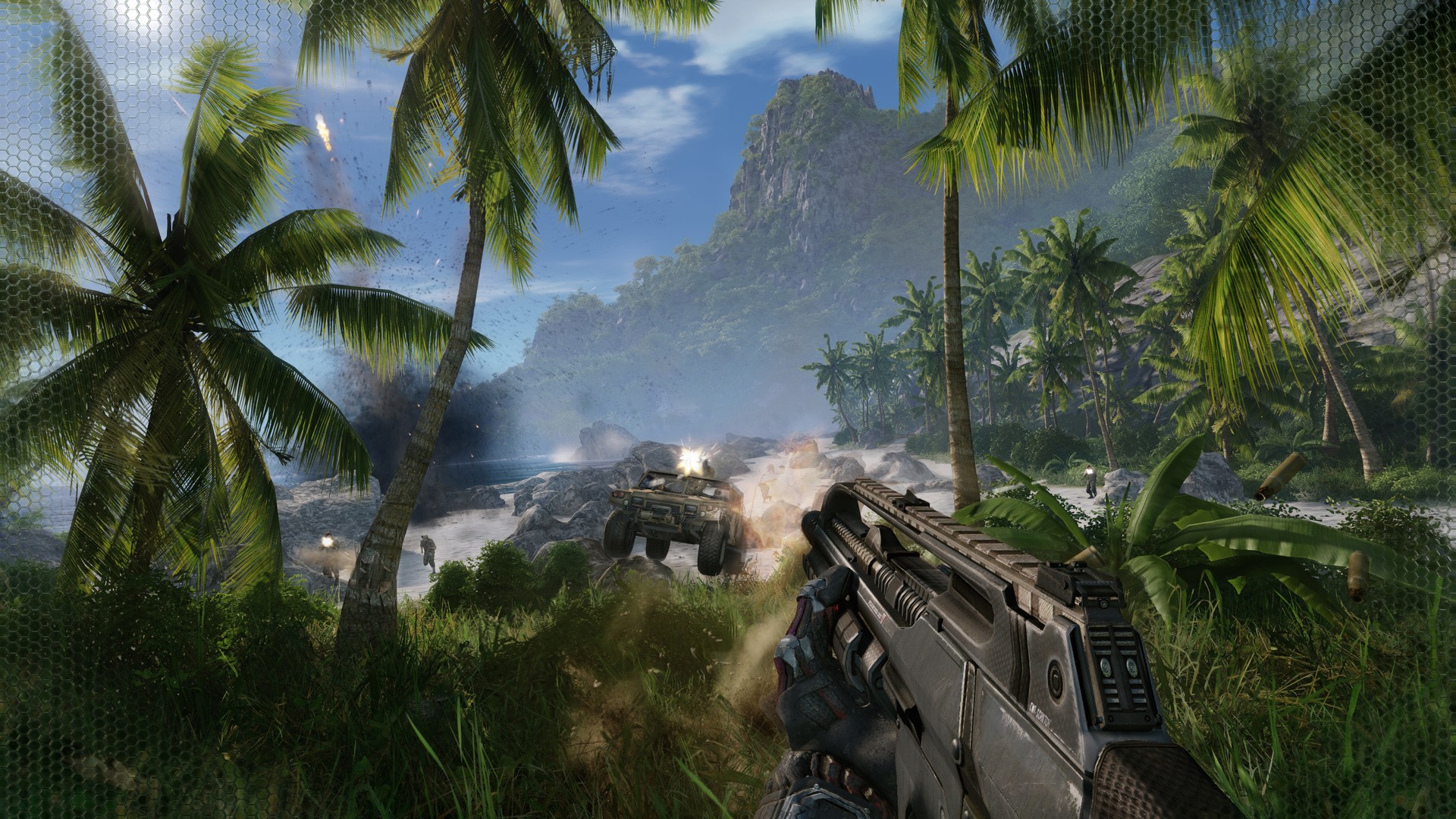 As stated above: Crysis Remastered runs well enough and looks as close as possible to the original PC release’s Ultra settings, but it doesn’t quite get there because it doesn’t come from that version, and anyone with extensive experience with the original Crysis can tell. For some odd reason (well, budget, actually), the PC version of Remastered is pretty much the same as the console builds despite the addition of graphical enhancements which weren’t there originally (such as ambient occlusion or improved light rays), resulting in a disappointing rehash of a game modders had pushed far above its vanilla limits for years.

This review was done on the PS4 version of the game played on PS5 (there’s no native next-gen release), and I’m going to focus on the console side of things. In that case, Crysis Remastered is arguably the best way to experience the original entry so far. Let’s say you’ve got a rig powerful enough to run the original at 1080p or above, but don’t want to bother with tweaking settings or facing compatibility issues with modern operating systems. This release, which has received a few adjustments since 2020, has you covered. Even on last-gen consoles, it manages to lock mostly stable framerates while maintaining a nice level of visual fidelity. On PS5, all three graphical modes (Quality for more res, Performance for more frames, and Ray Tracing) stay locked at 60 FPS most of the time, with some occasional, and seemingly unavoidable, dips that are tied to limitations of the engine/code in AI-heavy sections. You can also expect the resolution, which is dynamic, to stay above 1080p in most cases, at least on next-gen hardware.

Aside from the aforementioned framerate dips which will plague this game forever, the small but abrupt two/three-second stutters while loading new areas or saving checkpoints (very common in older games) are still there, but have nothing to do with performance problems. Just a heads up. Beyond that, the enemy AI feels a bit off — even on Normal difficulty, they appear to be highly aware of your position from long distances as soon as you’re out of cover or exit the nanosuit’s Cloak mode. It’s often frustrating if you’ve played through the original release, as the enemies exhibit a behavior closer to that of Delta (highest) difficulty, making firefights extremely tough when they shouldn’t be.

As for the plot, here’s a rundown for those blindly walking into Crysis‘ deadly island: North Korean forces take control of the Lingshan Islands in 2020 (d’oh), and a team of archaeologists working there send out a distress signal, saying the Koreans are unearthing something terrible. A special unit of nanosuit-wearing commandos (supersoldiers, basically) are quickly dispatched by the United States — their mission is to rescue the scientists and uncover what the Koreans are toying with. Things quickly spin out of control, as they might be a little too late to stop them from waking an ancient threat that could endanger the entire world. I’ve always felt it’s a memorable mix of sci-fi and McTiernan-ish old-school action with a good amount of Michael Bay thrown in, and the levels get progressively crazier and remain impressive almost 15 years later. On top of that, the nanosuit offers a set of superhuman enhancements which many subsequent shooters have failed to replicate — it kicks ass and makes the game’s sandbox even more fun. 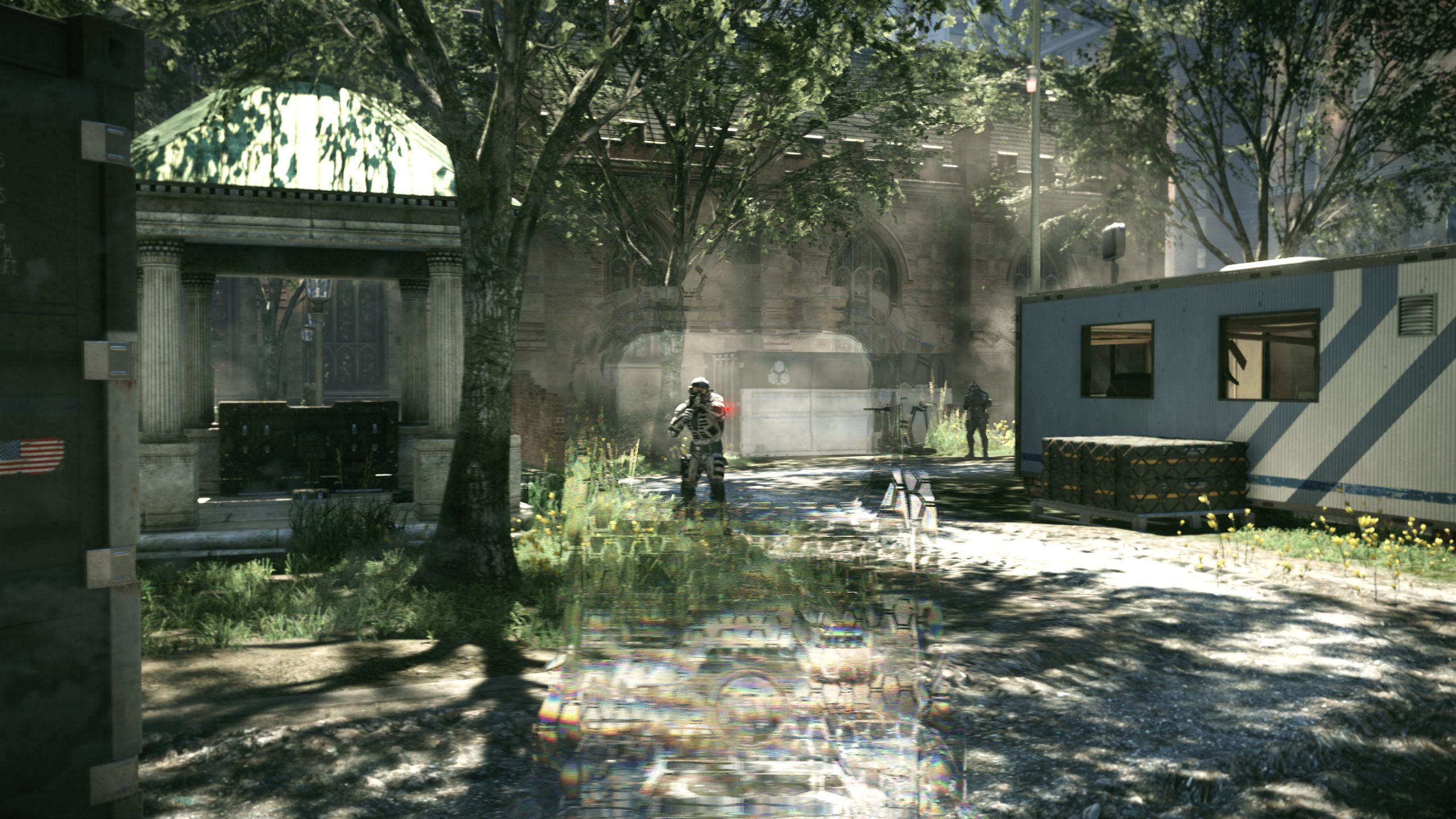 Crysis 2 arrived in 2011 and, while it didn’t leave a mark nearly as big as the original game’s, found enough success and critical acclaim. While the CryEngine tech had evolved since 2007, Crytek cut back on scale and moved the action to a way less sandbox-y New York City. The first Crysis‘ biggest strength is how open most of its levels were, especially during the first half of the game — the scale of the island was massive even if it wasn’t a full open-world experience. The graphical fidelity alone was a problem if Crytek wanted to bring the newborn franchise to consoles, and the sheer size of Crysis made things even worse — it later got a mediocre console port regardless. That’s why Crysis 2 opted for a more linear experience with wide levels that never are too big. All of its gameplay roots are there, and the nanosuit’s abilities kept evolving, but the game was kind of doomed to feel like a step back from its predecessor. Still, I fully believe it’s a good shooter with great art direction (Crytek always delivers on that front) and really impressive production values.

The big thing about Crysis 2 Remastered (and the third one too) is that, unlike Crysis Remastered, it’s been built using the original PC version of the game. That means the optimizations and improvements are much more solid and noticeable, especially if you never experienced it outside the dreadful PS3/360 ports, which ran really badly in spite of the sacrifices made. This time around, Crysis 2 and 3 are smooth as butter, running locked at 60 FPS 99% of the time and exhibiting a much higher visual fidelity than the original PC version as well, with great upscaling and new antialiasing techniques thrown in for good measure. This is the result of both the games’ more restrained nature and coming from the best version available previously.

The plot of the sequel takes place in 2023, three years after the events of the original game. Despite some retcons regarding the aliens’ appearance and their tech, it’s pretty much a straight sequel that doesn’t play out as fans thought it would. I personally always preferred what the original was going for, but I’m guessing they wanted to both avoid a typical alien invasion plot and get the opportunity to play with a setting as interesting for a game as NY. Plus… new human enemies on American soil because evil organization. This ride isn’t as memorable as the first one, but it gets the job done. 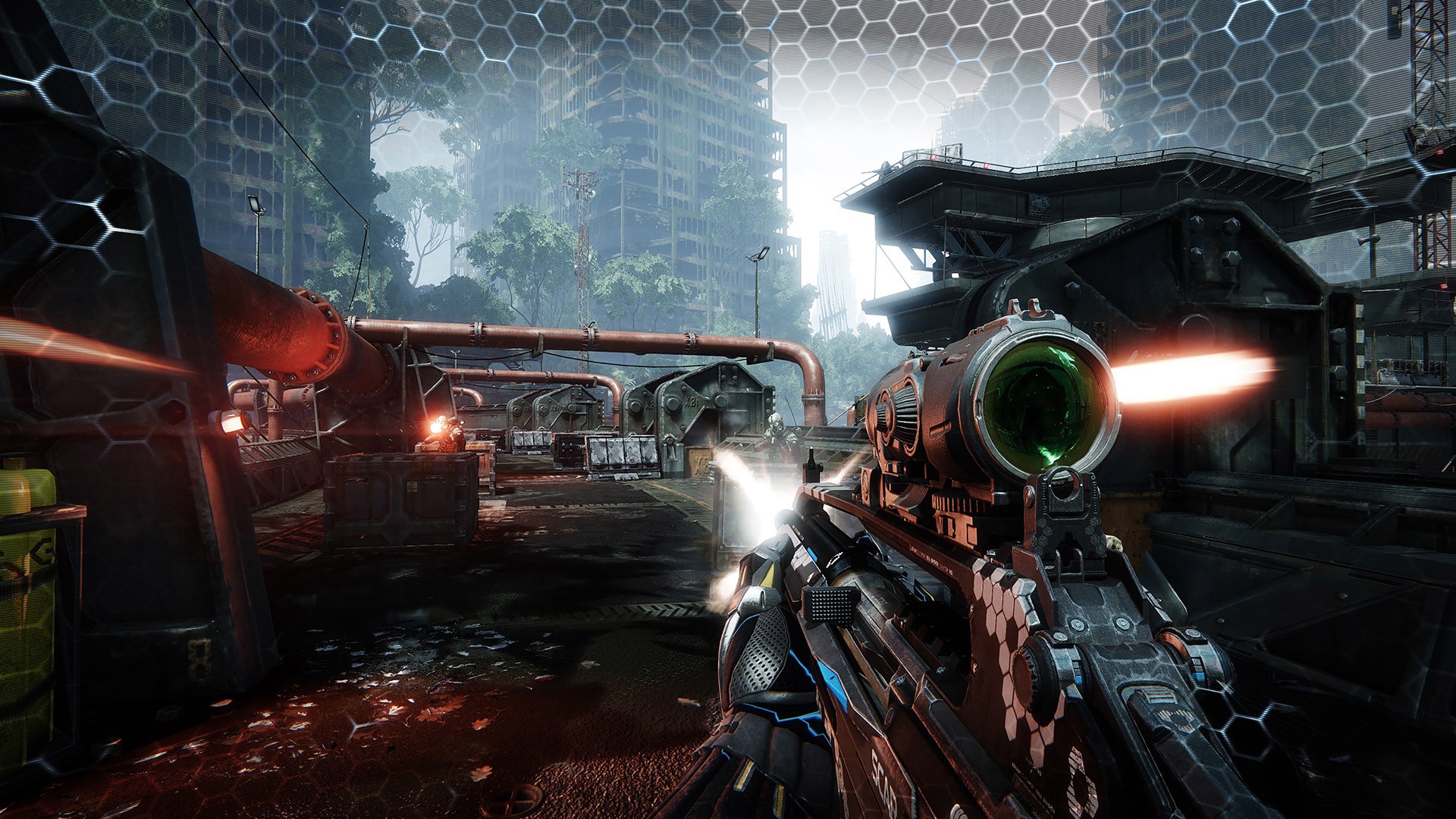 Crysis 3 (2013) pushed the tech even further, delivering another benchmark that has been used for years despite its optimizations for newer hardware and the not-as-big-as-the-original scale. The 2013 release is still a looker, and Crytek’s art department going absolutely crazy with a post-apocalyptic NY in the year 2047 (yeah, a lot has happened) paid off big time; the time jump allowed the developers to come up with a number of locales and gameplay ideas that actually feel like natural progression for the franchise. It’s also worth mentioning that the story recovered some concepts from the original game and tried to make it all fit together more nicely after the major departure that was Crysis 2. Gameplay-wise, the nanosuit got more upgrades than ever, and the customization systems for weapons became larger too. Plus, you get a futuristic bow — bows are always awesome in video games, it’s an unwritten rule.

It’s odd to see Crysis 3 Remastered pack graphical settings on consoles which aren’t available for Crysis 2, since they were developed together and following the same process, unlike the first one’s upgrade. If I had to guess, I’d say it comes down to the engine’s differences between games. Another important bit of information is that 2 and 3 do not offer ray tracing, and instead opt to use “screen space reflections” to simulate those visuals, since they don’t tax the hardware as much. The implementation of ray tracing in Crysis Remastered isn’t especially good despite the minor performance impact, so I think I’m okay with the devs aiming to deliver a smooth experience first and foremost if these old versions of the CryEngine don’t play well with the fanciest graphics tech of 2021. 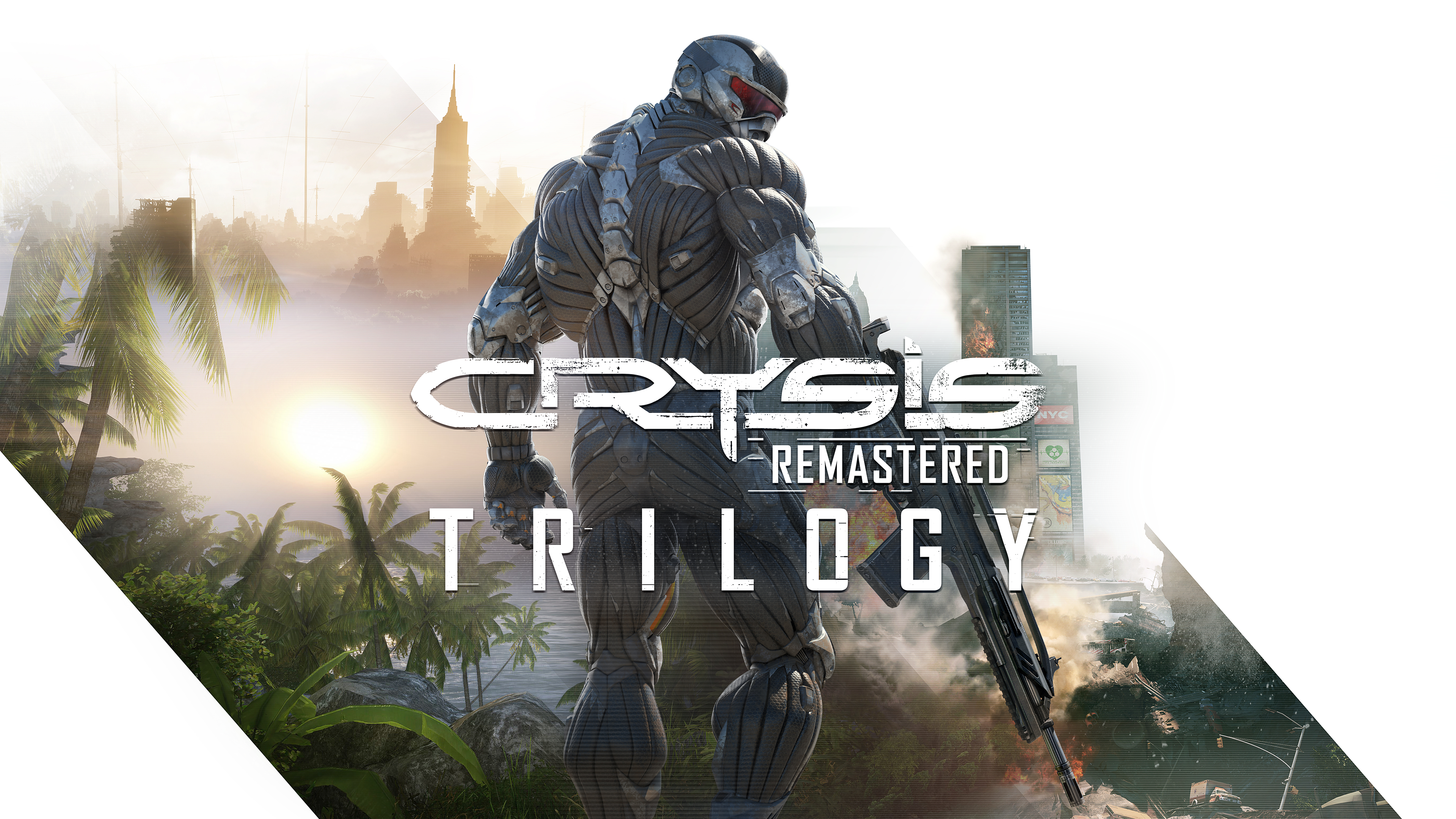 All in all, I had tons of fun revisiting these three games on PS5, and I think there has never been an easier, more straightforward way to experience them without technical hiccups. The upgrades are uneven, and I wish they had reworked the original game’s tech in the same game they did the sequels, plus some graphical glitches and AI oddities still persist (Crytek and Saber claim many will be fixed soon), but this is a good package for veteran and new players alike. PC gamers who have spent years improving the Crysis trilogy on their own might not find a lot to love here, but consoles have never had it better. Now I’d like a remaster of 2008’s Crysis Warhead, please. Forget about Crysis Wars and the undercooked multiplayer modes. That was a terribly underrated spinoff that deserves better.

Crysis Remastered Trilogy is now available on PC (Epic, only the first game on Steam for now), PS4/5, Xbox consoles, and Nintendo Switch for a recommended price of $49.99. Note that the Switch version is wildly different from the console/PC builds and isn’t represented by this review.

Thanks to Crytek for the PS4 review code (played on PS5).