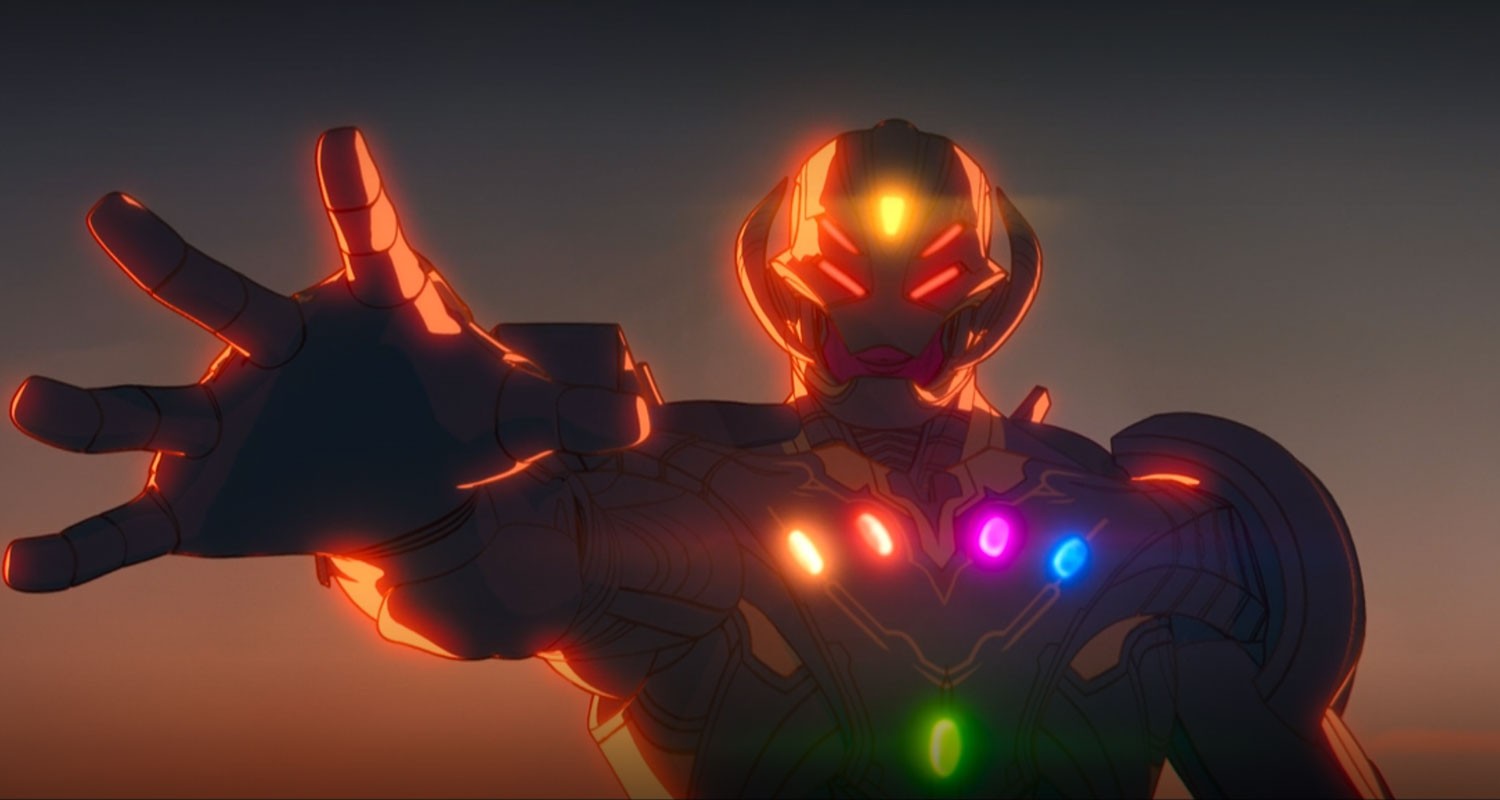 After a fun and light hearted affair last week, Marvel’s What If…? returns with a dark post-apocalyptic adventure that reaches an important point in the season.

It wouldn’t be inaccurate to state that Ultron is one of the MCU’s more underwhelming villains. He was the poster bot of Marvel’s villain problem at the time, just the latest in a number of one-and-done villains who were unable to leave a significant impact on audiences. Sure, you could sort of understand his motives, but by human standards, he was yet another psychotic villain who went about his goals in the wrong way. The Age of Ultron that comics fans might have expected never came to pass in the movie itself.

So it says a lot that What If…?‘s greatest achievement this week was demonstrating just how dangerous a villain Ultron could be. This week’s “what if” moment comes when Ultron succeeds in uploading his consciousness to the vibranium Mind Stone-enhanced body that we know to become Vision. It seems that doing so enables him to kill all the Avengers except for Black Widow and Hawkeye, and enact his genocidal plan.

It should be noted that the voice of Ultron is not reprised by James Spader, who was presumably too busy working on the latest season of The Blacklist, but resident Marvel impressionist Ross Marquand was hired to voice the character instead after impressing with his work portraying Hugo Weaving’s Red Skull in Avengers: Infinity War and Endgame. You can just about tell that it’s not Spader voicing the character, but Marquand does a good job overall.

It doesn’t take long before the episode and Ultron’s ambition stretches beyond Earth, delivering some long-awaited moments that threaten the multiverse. Not every dramatic moment lands (one character’s fate feels particularly shallow), but on the whole, it is a dramatic and entertaining episode.

It seemed we were in for an episode like any other as it opens with Black Widow and Hawkeye fighting against Ultron’s army, giving apocalyptic vibes as we see what the Age of Ultron actually looks like. For all of Ultron’s talk of evolution, all we see here is destruction in the aftermath of his extinction-level event.

The pair’s adventures on Earth help to keep the episode grounded, as Toby Jones makes a very welcome return as Arnim Zola. I never would have expected Zola AI to be the key to saving the multiverse, but you have to admire the writing team’s creativity. His banter with Clint and Natasha is pretty fun, as you’d expect from a hero and villain pairing. Unfortunately, the episode shows a surprising lack of creativity in its handling of Hawkeye. 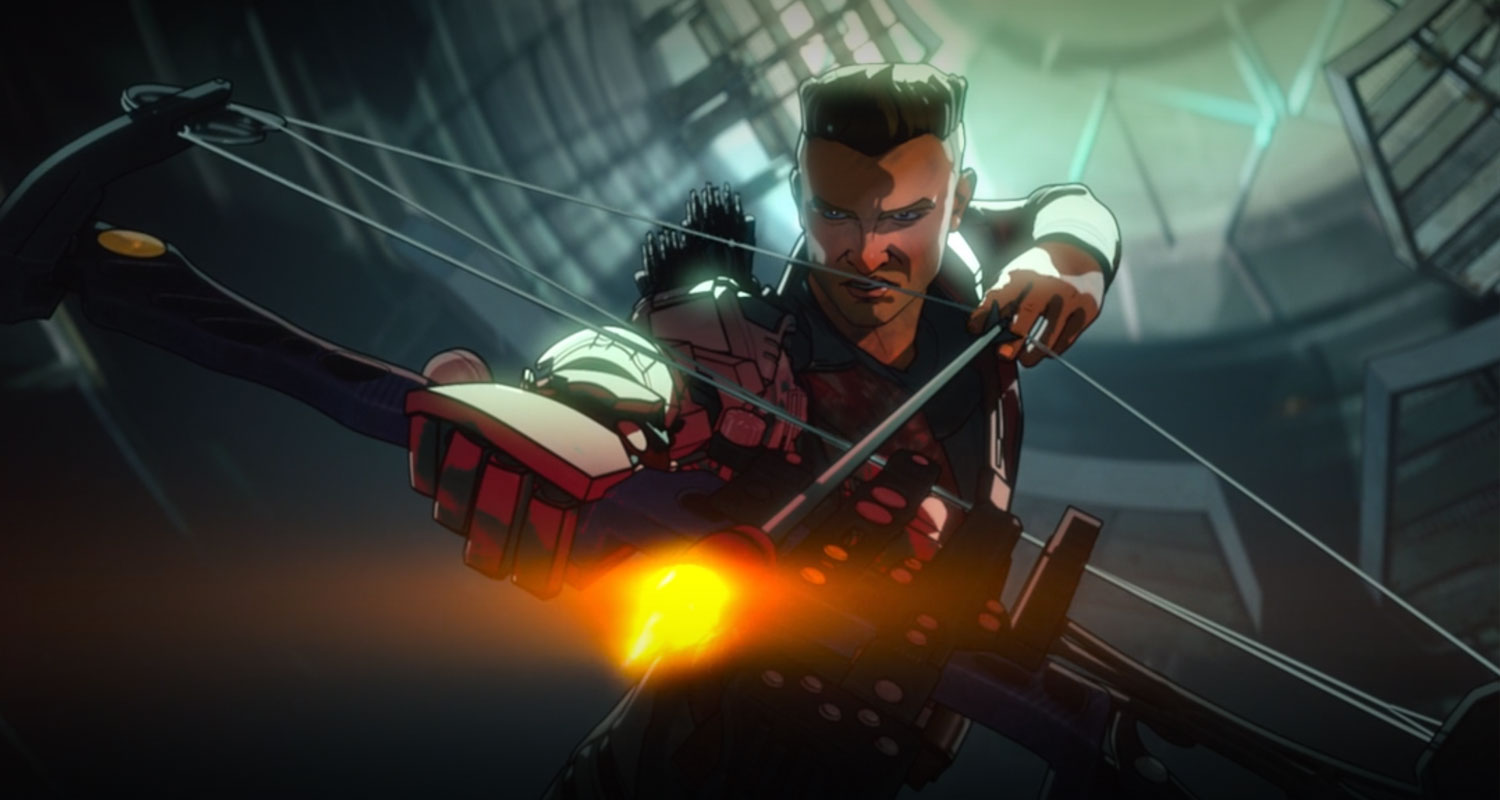 It’s easy to buy a Hawkeye fatigued by losing to Ultron, feeling that the odds are stacked too far against them in a world without the Avengers. The scene where The Watcher begs him to look a little bit harder is fantastic. Jeffrey Wright acts as a conduit for the viewer in that moment as we can see that Clint is so close to finding the answer they’re searching for.

When Natasha finds the file they’re looking for, that should be the pick-me-up Barton needs to carry on fighting. But a few minutes later when they try to escape the HYDRA base, the writers drudge up his fatigue once more when the problem had already been solved.

This is seemingly because they wanted a big sacrifice before Natasha got away with the key to defeating Ultron. Unfortunately, everything about it felt wrong. Hawkeye gave up way too easily, when it would have been quite simple for the two of them to survive together.

Instead, the episode decided to reverse Natasha’s big death scene from Avengers: Endgame, with her holding Clint’s hand this time as he dangled above an abyss. Not only was it difficult to buy this sacrifice, but it brings back memories of a scene that is still highly controversial for most Black Widow fans. It didn’t work for me, and I imagine a lot of people will be similarly disappointed. 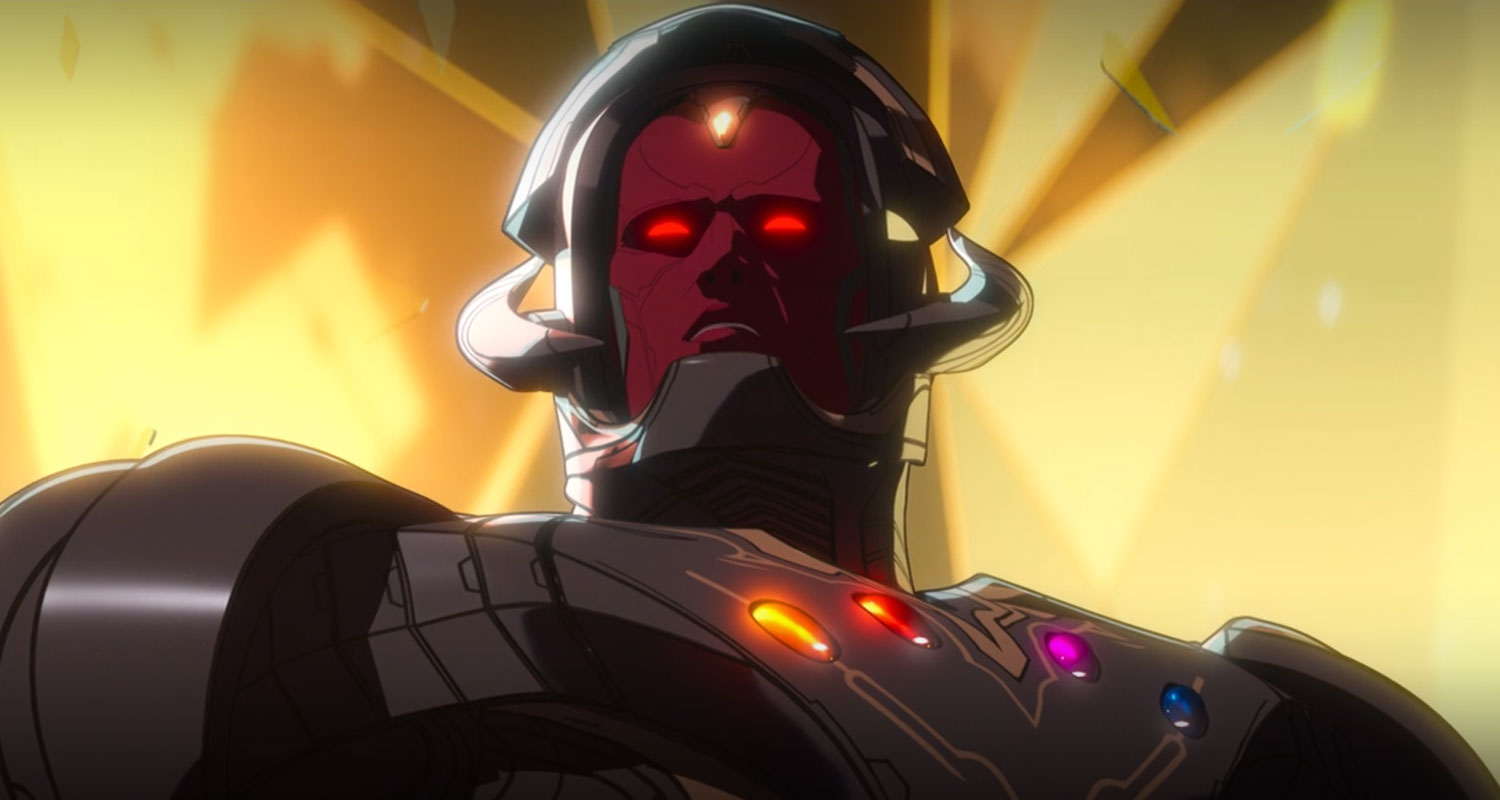 The episode’s biggest moments come in Ultron’s journey and his confrontation with The Watcher. It’s slightly amusing, if not shocking to watch him slice Thanos in half with one blast of the Mind Stone beam (making you appreciate just how powerful Vision was) and it’s the first big demonstration of just how unstoppable he would have been if the Avengers hadn’t stolen his vibranium body in Age of Ultron.

We then see him create an entire army with the Infinity Stones (using an “infinity suit” more closely resembling his comic body, rather than an infinity gauntlet) and lay waste to the rest of his universe, conquering multiple worlds that we’ve seen in the MCU, from Asgard to The Sovereign (where the Guardians of the Galaxy get obliterated during their opening fight in Guardians of the Galaxy Vol. 2) and Sakaar. Even Ego can’t handle the power of Ultron with the infinity stones and an infinite army, which makes you wonder how the variant of him from episode 2 fits into the finale. 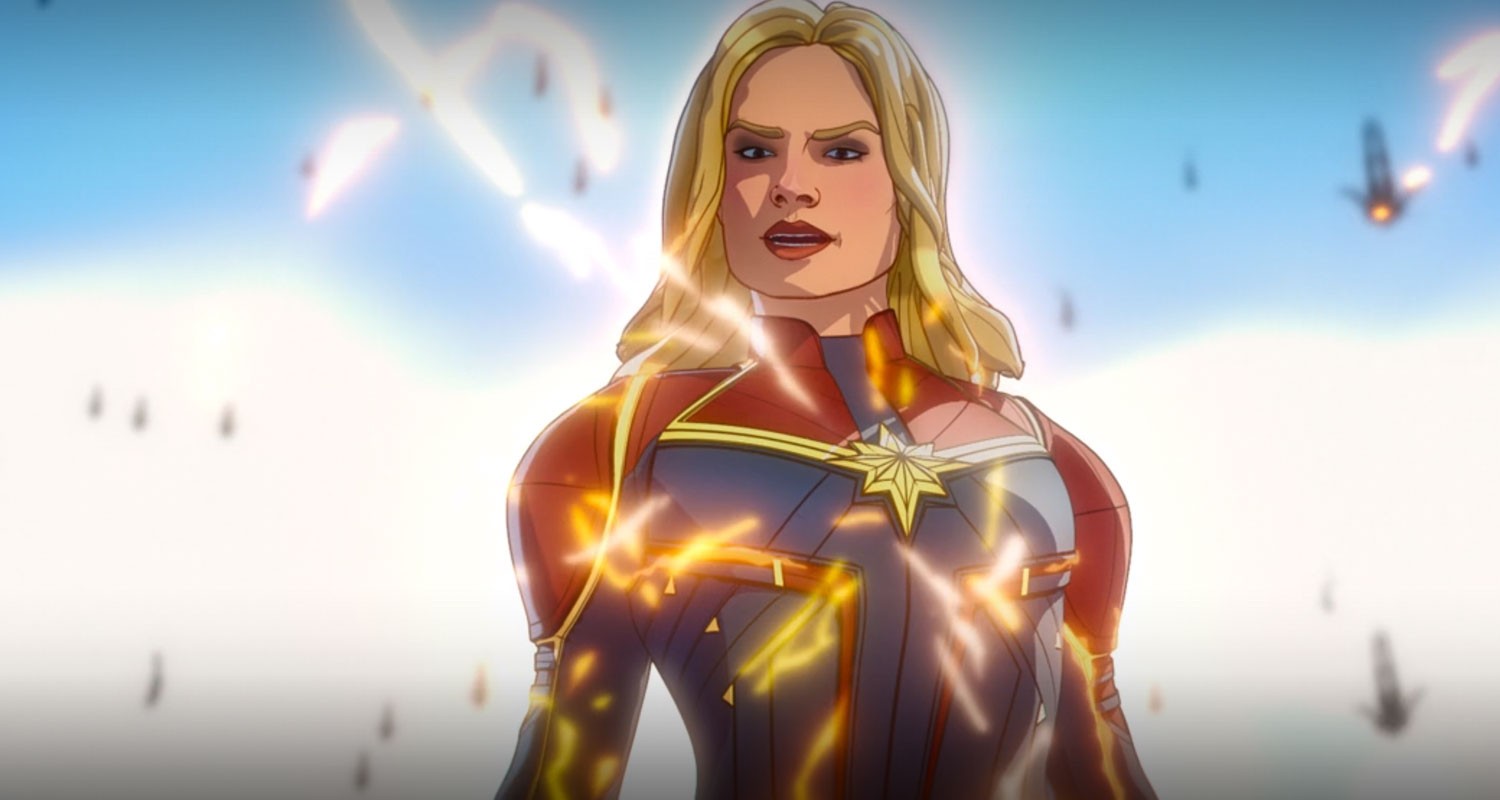 It looks like Captain Marvel might come to the rescue when he attacks Xandar, using her Space Stone powers to push Ultron down to the planet’s core. Unfortunately, it’s quickly clear that even she is no match as Ultron simply destroys the planet and those in its star cluster, a blast that she cannot survive.

We are briefly presented with an interesting situation, as The Watcher notes that with every world in his universe conquered, he became a machine without a purpose to fulfill. This would have been an interesting concept to watch unfold, as Ultron was already considered crazy by human standards. It’s almost a shame that the story pivots a way from such a premise, when we see that Ultron can now hear The Watcher’s narration thanks to the Infinity Stones, just as Doctor Strange could hear and speak with him back in episode 4 thanks to his magical skills.

This saw Ultron become the main threat of the What If…? series. Once he became aware of The Watcher, the Infinity Stones allowed him to access The Watcher’s multiverse nexus. We’re treated to an entertaining reality-hopping battle, as we see Jeffrey Wright’s character is a match for a being with all Infinity Stones. During this fight, we get a very interesting line where Ultron expresses his disdain for the The Watcher, judging the god-like being for observing countless moments of suffering across multiple universes and doing nothing to help. 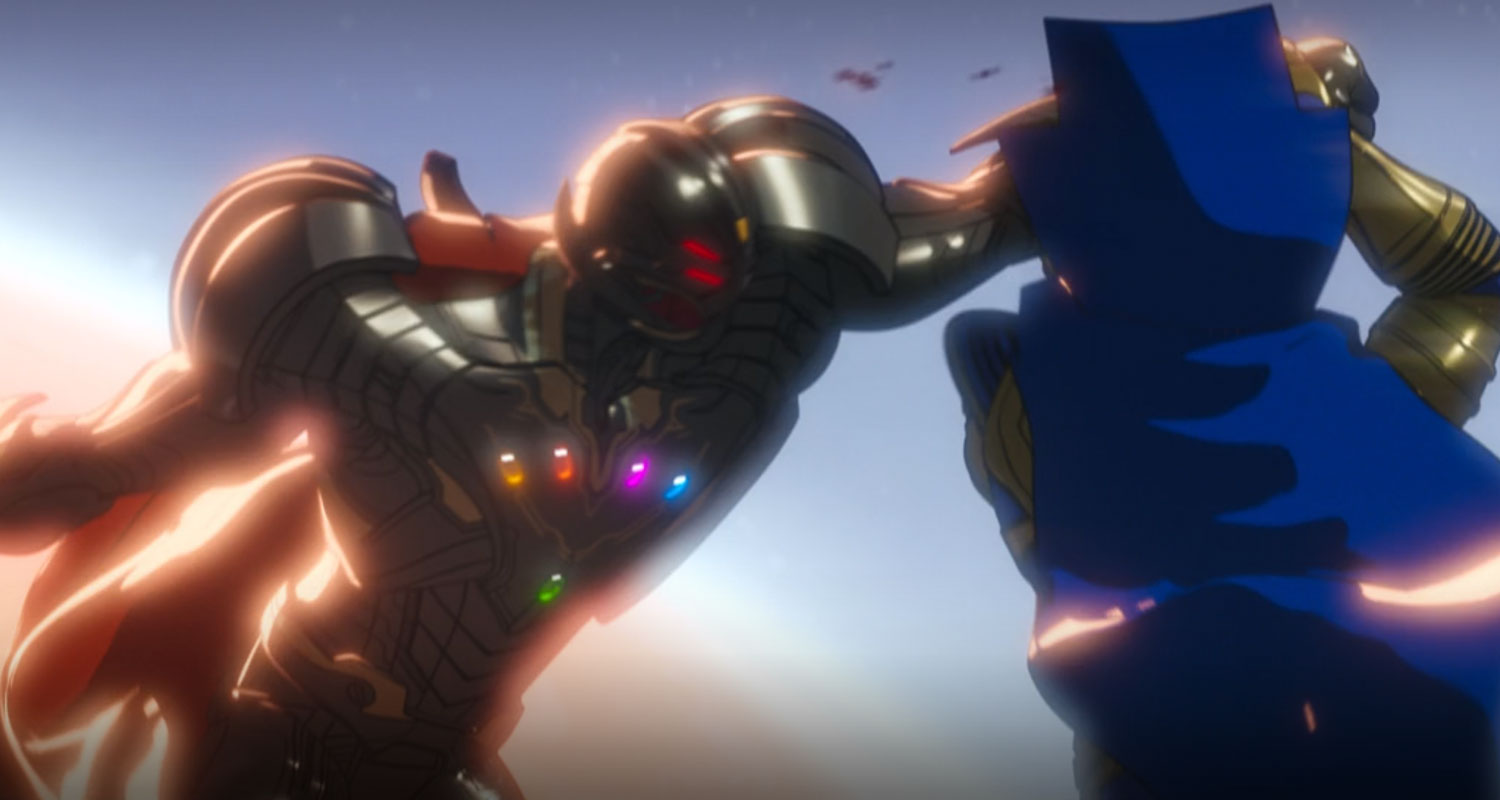 In that moment, it’s hard to disagree with the sentiment and it’s an important reminder that The Watcher is not inherently a heroic character, though the restraint not to meddle with reality is admirable. Unfortunately, that moment is cut short as Ultron’s arrogance returns, as we are reminded what his vision of peace entails.

The following journey through multiple universes is a visual treat, and we seem to get a Galactus easter egg as Ultron devours an entire universe at one point. This is followed by a very enjoyable setting as The Watcher lands in a universe where Steve Rogers becomes the President of the United States, before Ultron punches through various other realities and locations. In the end, our narrator is forced to flee to Doctor Strange’s (this variant is called “Strange Supreme” in the credits) pocket universe from episode 4. 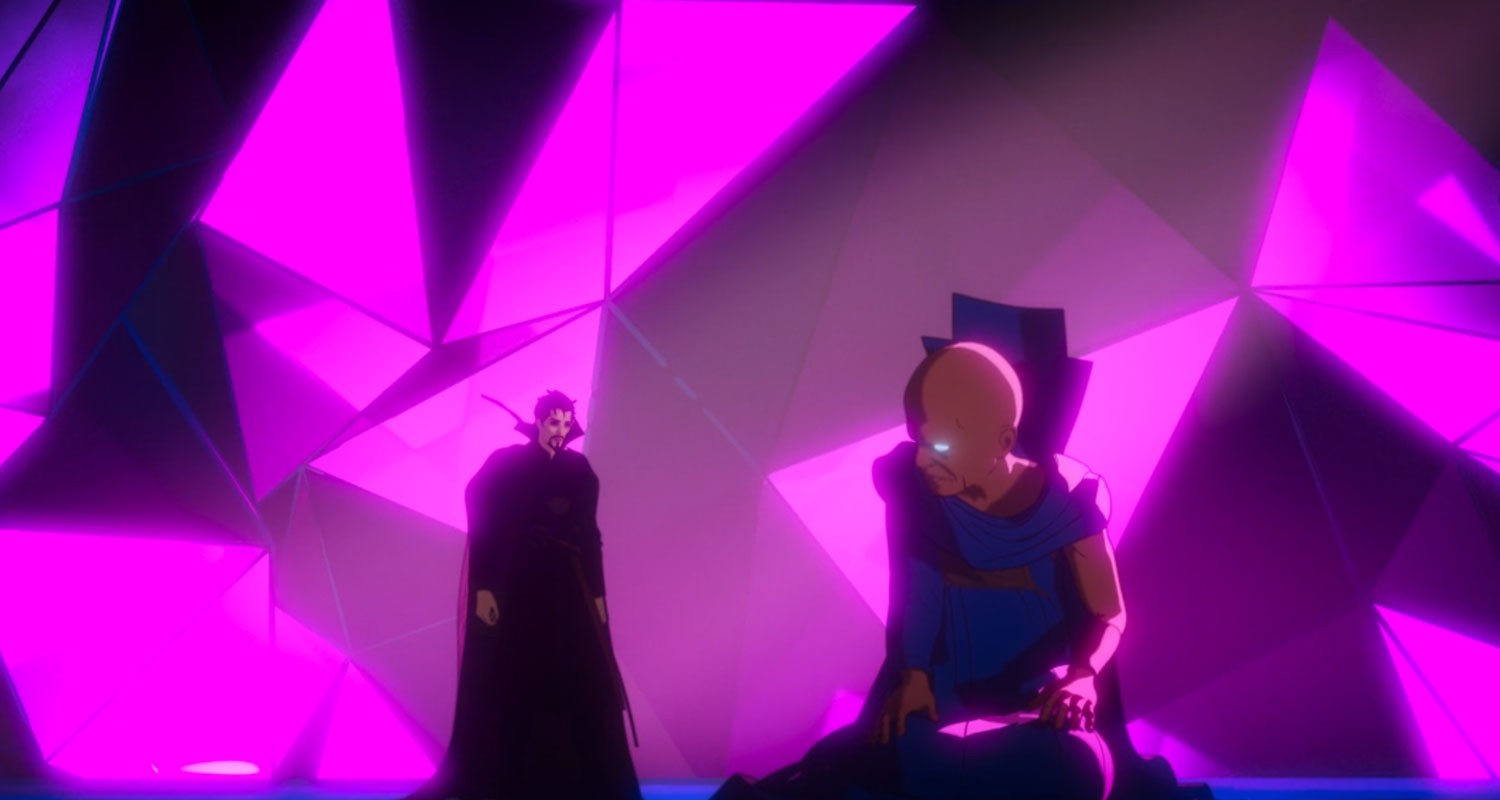 Fans have been wondering what it will take for The Watcher to finally break his oath and meddle in the multiverse, and in this episode we finally get our answer as Doctor Strange finally persuades The Watcher to intervene before the entire multiverse is lost. It’s a tantalizing set up for the finale, which will presumably see The Watcher and Strange assemble a team of heroes from the previous stories to defeat Ultron.

The Watcher and Ultron conflict is up there with some of the best moments of the series, but unfortunately the lacklustre writing for Hawkeye weighed down the episode’s B-storyline. Hopefully the finale will stick the landing, as it promises to be the most action-packed episode of What If…? yet.