‘Clid the Snail’ Review: This Gastropod Has the Charm, but Not the Moves 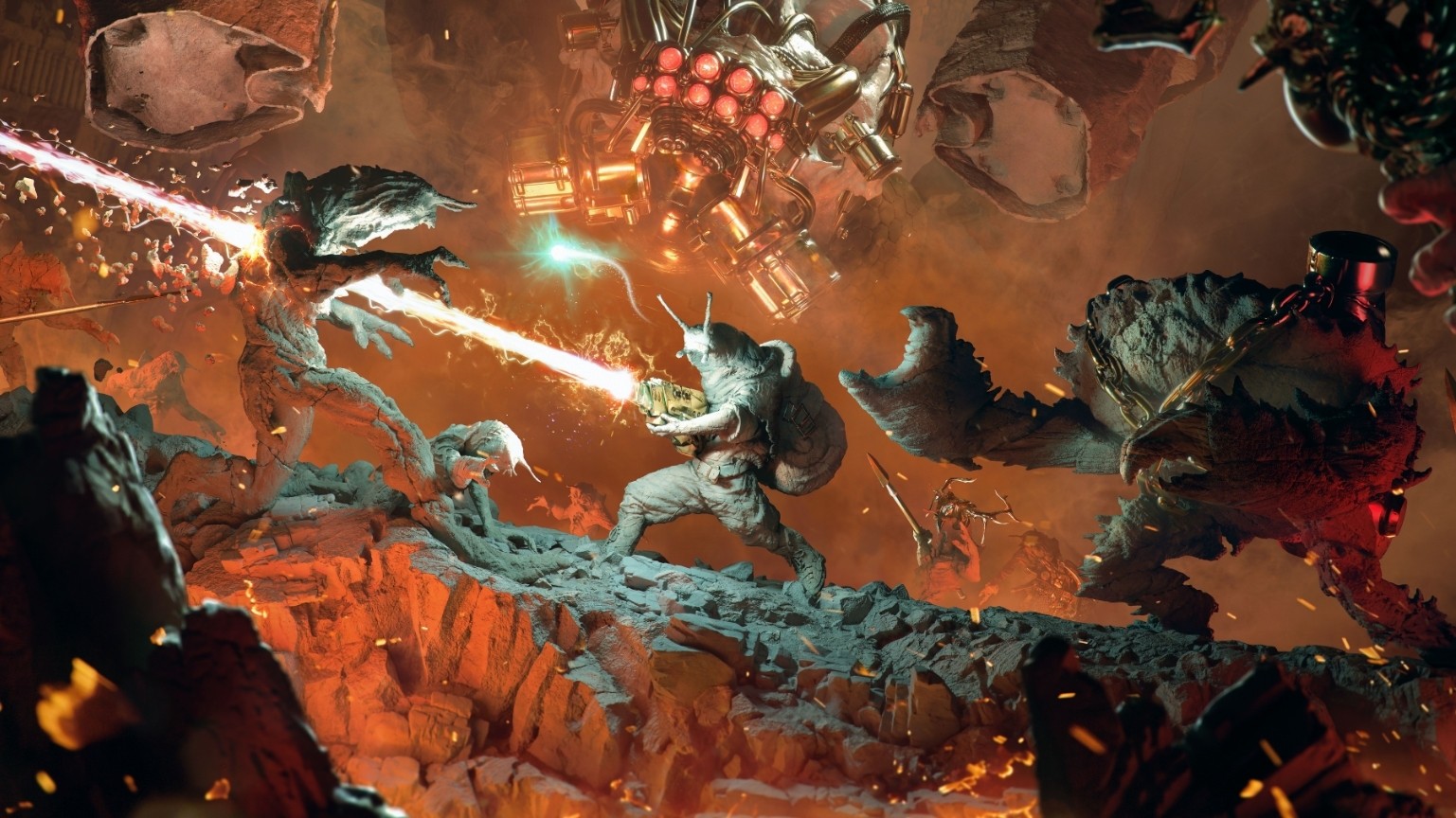 Clid the Snail must be one of the dooziest games of 2021, but how much firepower does it really pack?

Madrid-based, five-man indie studio Weird Beluga (fitting name) set out to develop this oddball top-down shooter right after winning “Best Game” and “Best Art” at 2019’s PlayStation Talents Awards. At that point, Clid the Snail was just a demo which had been born from a game jam. Two years later, it’s one of the most talked-about indie releases of the year.

The reality is that Clid ain’t a weird game at all. It plays fairly straightforward and never strays too far from the genre’s roots, which is actually a smart decision for an up-and-coming small indie studio with limited resources. Surprisingly, the game’s visuals are quite solid, bolstered by amazing art direction and quite inventive character designs. You can tell it’s a passion project that oozes charm.

The story isn’t complex either. Clid is a potty-mouthed snail who likes to shoot bad guys in the face and venture outside his town. This is a problem because snails are typically very chill and never partake in conflicts. After a few adventures beyond the city walls, his cohabitants decide he’s a menace that draws too much attention to them (there’s a war of sorts raging outside), so they banish him. And this isn’t a spoiler at all, just the first few minutes of the game. It’s a story about found family and making a stand against evil when nobody wants to. As I said, quite basic stuff, but it clicks together and has a solid pacing. 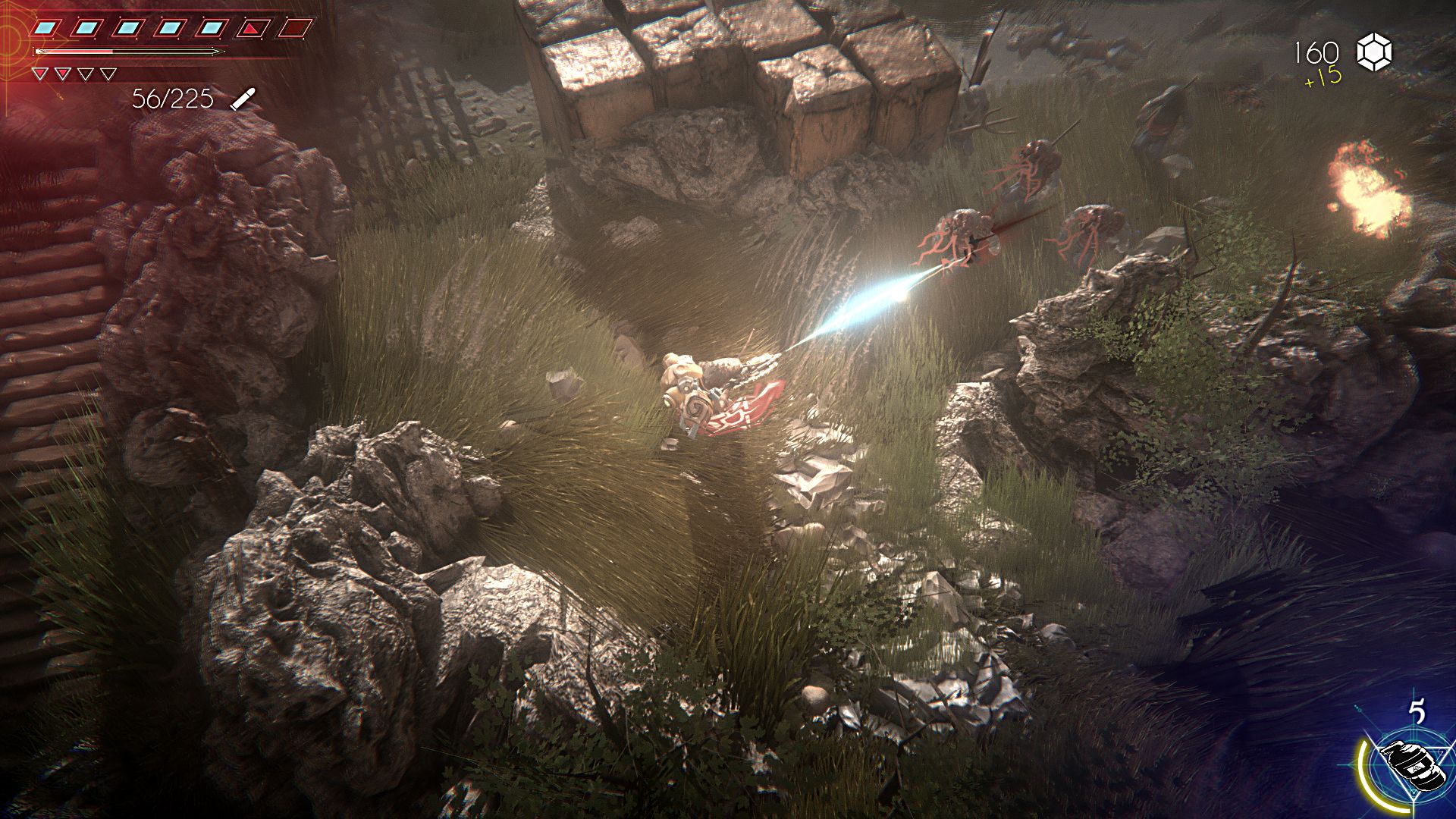 The game’s biggest strength, aside from its art direction, is the colorful cast of characters that surround Clid, who’s already a distinct unexpected hero that many times feels like Han Solo but gastropod. There are lots of small animals-turned-warriors in Clid the Snail, and many designs take advantage of the idea that supports the world constructed by Weird Beluga: what if humans disappeared and critters kept evolving to replace us? The game never really pays a lot of attention to Earth’s past or how the humans disappeared, but their remains and what they left behind can be found all over. It’s a Mad Max kind of scenario, but with animals rebuilding civilization and declaring war on each other. And yes, guns are a thing.

This brings us to the roster of enemies, spearheaded by slugs that have become a plague which is slowly taking over the continent — this is what prompts Clid to venture into the wild and disobey the elder snails (yes, they have beards). Enemy variety, gameplay-wise, isn’t very good. You see, that wouldn’t be a problem if the encounters were exciting, but most of them feel like a chore, with zombie-like melee adversaries that throw themselves at the player in a straight line, or meatier goons that simply are bullet (or laser) sponges. The gameplay’s highest points come from some arenas which manage to shake things up with shield-carrying gladiators and other “elite” enemies, plus there are some interesting boss fights that feel adequately old-school. 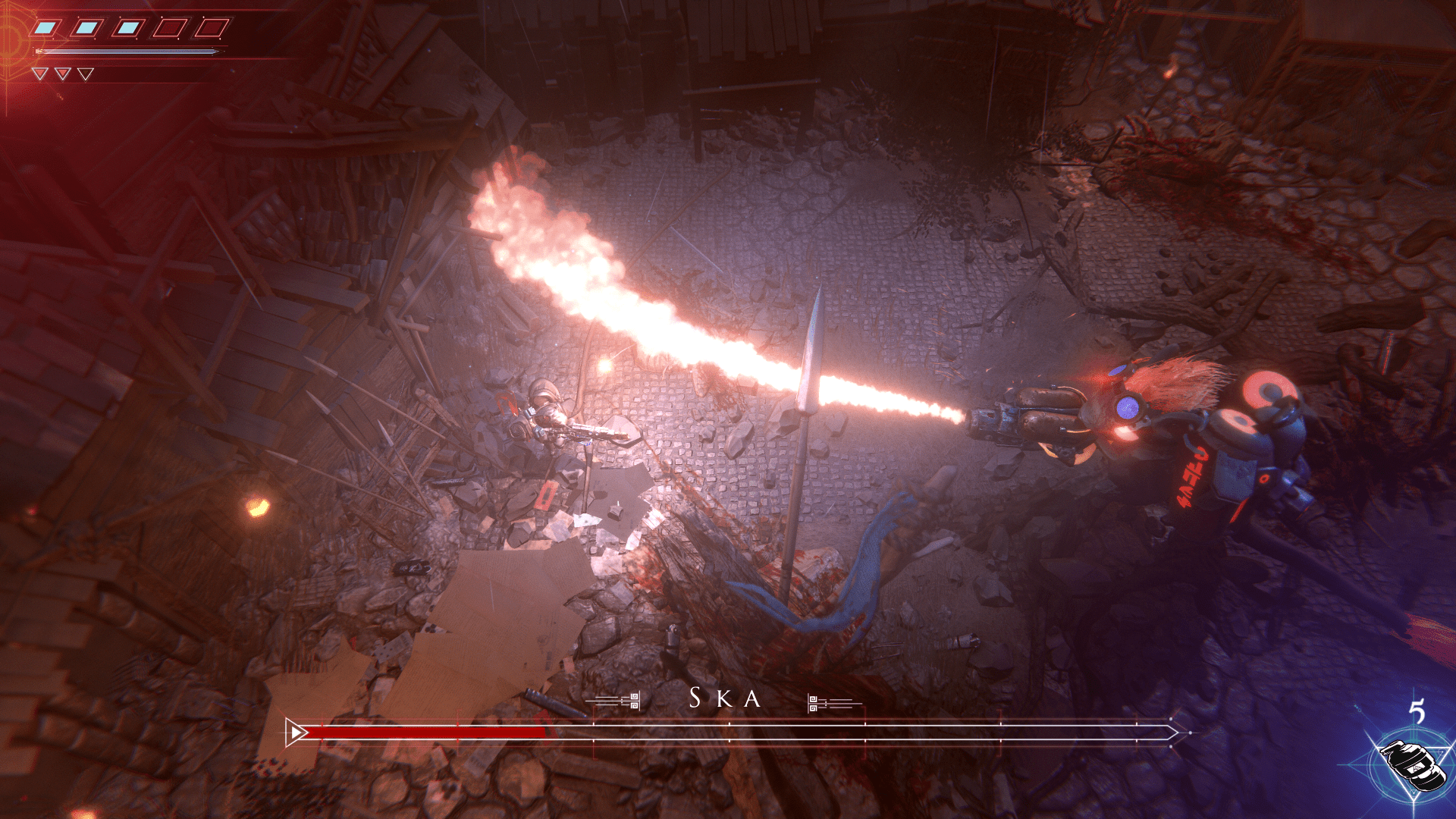 Clid himself isn’t much more graceful either. I liked that Weird Beluga went for quality over quantity with the snail’s arsenal, and the progression is well-paced enough, yet the action never gets hectic or fast enough to allow the gore-soaked shooting to truly shine. Furthermore, Clid’s movements and evasive maneuvers feel ironically sluggish — dodge rolls more often than not feel pointless, as the invincibility frames are janky at best. A couple of hours in, I was looking for bottlenecks wherever possible — taking advantage of enemies’ dumb AI proved to be more effective than playing the game the way it’s supposed to be played. That’s a big problem. As I said before, the arenas and boss fights are much better designed than the more linear sections of the levels. Puzzles scattered throughout the journey also add some variety, although they’re never too intricate nor rewarding.

While level and enemy design feel inconsistent, the world itself is lush, dark, and, more importantly, different. At times, Clid the Snail feels like a top-down shooter riff on the Oddworld franchise; I love strolling through completely bonkers worlds full of human-like features, objects, and places, yet devoid of… humans. If the game gave me a solid reason to push forward, it was its world and the characters that inhabited it. The adventure doesn’t overstay its welcome either, and that works in its favor. That’s both good and bad; I really appreciate indie games that know when to end, but the fact I felt relieved when the credits rolled means I didn’t have much fun playing through this one. 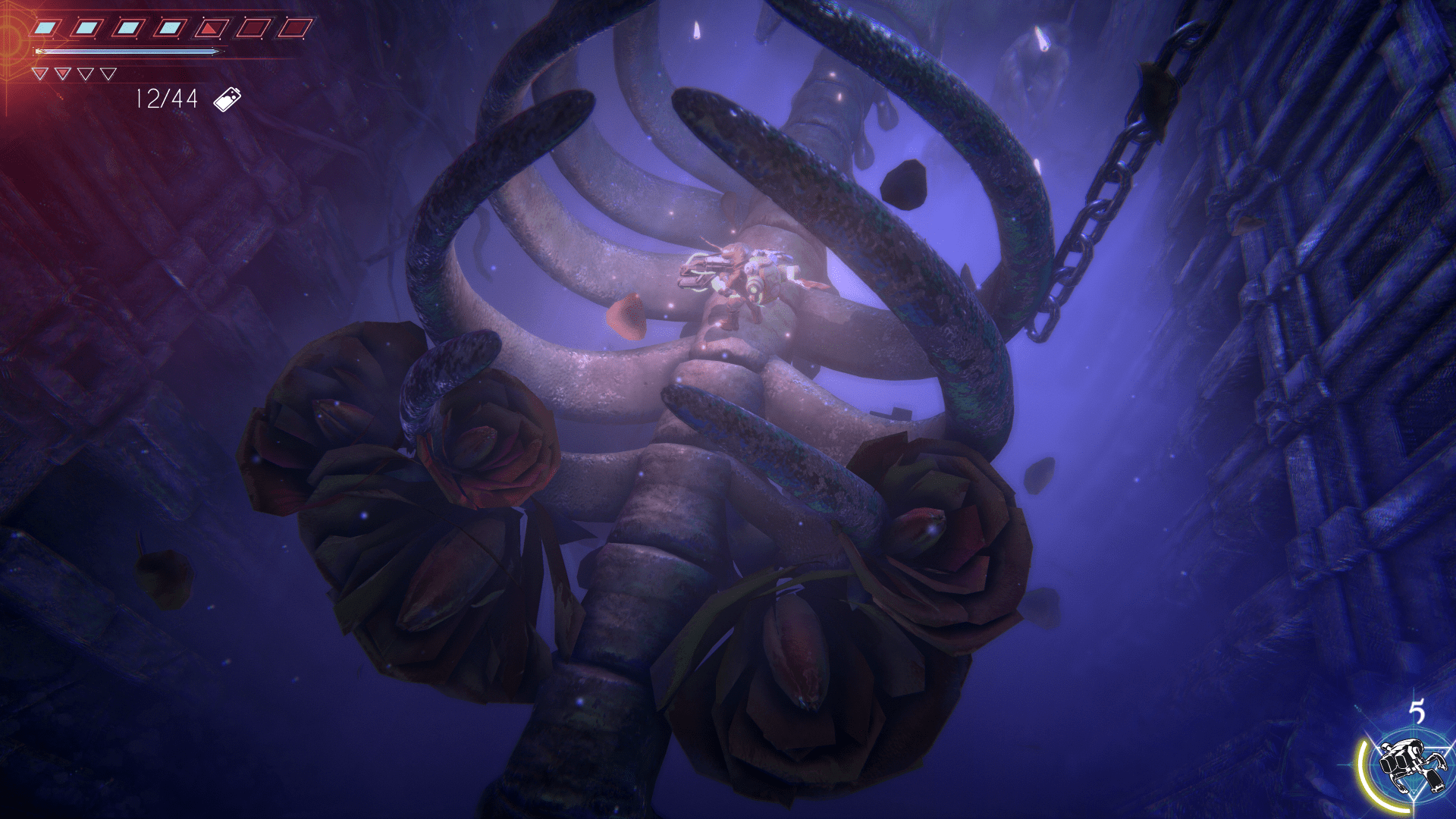 Clid the Snail also contains a very metal soundtrack that works in conjunction with more peaceful bits of music that often feel repetitive, since they sometimes keep playing over and over despite changes of scenery. I like how the music sounds, but I wasn’t on board with the mixing and transitions, which most of the time felt either too sudden or random. Sound effects are more harmonious, ranging from subtle nature sounds to messy splashing and unpleasant grunts; they help sell the overall tone, which swings between beautiful and hellish with relative ease.

I can’t finish this review without talking about the ugly, bloom-heavy filter that constantly covers the screen and brings the game’s visuals way down for no good reason. Other reviewers have described it “as if a snail had left mucus all over the screen.” It’s very sad to see the remarkable art direction and character designs be partially trashed with an excess of muddy post-processing effects. Performance on PS4 isn’t very good either in spite of Clid not being a graphical marvel — framerate often goes below the 30 FPS target in peaceful situations, so I’m guessing these problems are tied to unoptimized assets and effects in areas which are slightly busier than others. As expected, PS5 does perfectly fine due to its raw power.

There’s an inherent charm to Weird Beluga’s twisted, nature-reclaimed post-apocalypse, and its heart is definitely in the right place, but Clid the Snail never clicks together as a top-down shooter or a breezy adventure. I fully believe there’s a solid game buried underneath all the rubble, and some of its problems could be reworked with extensive patches, though I’m not sure the studio is willing to stay put and fix these issues instead of pushing forward with a new project, as the game’s been a moderate success so far.

I’d personally like to return to this world… in a much better game. This time around, I advise you to look for a better twin-stick shooter (there’s plenty of them lying around) unless you’re really into the “war of the gastropods” premise. Adding insult to injury, like 90% of the progress-related trophies didn’t unlock during my playthrough for some strange reason — I think this isn’t a widespread problem though.

Clid the Snail is now available on PS4/5 for a recommended price of $19.99. It’s arriving on PC as well later this year.

Thanks to Koch Media (publisher) and Tinsley PR for the review code.