‘Scenes From a Marriage’ Episode 1 Review — ‘Innocence and Panic’ 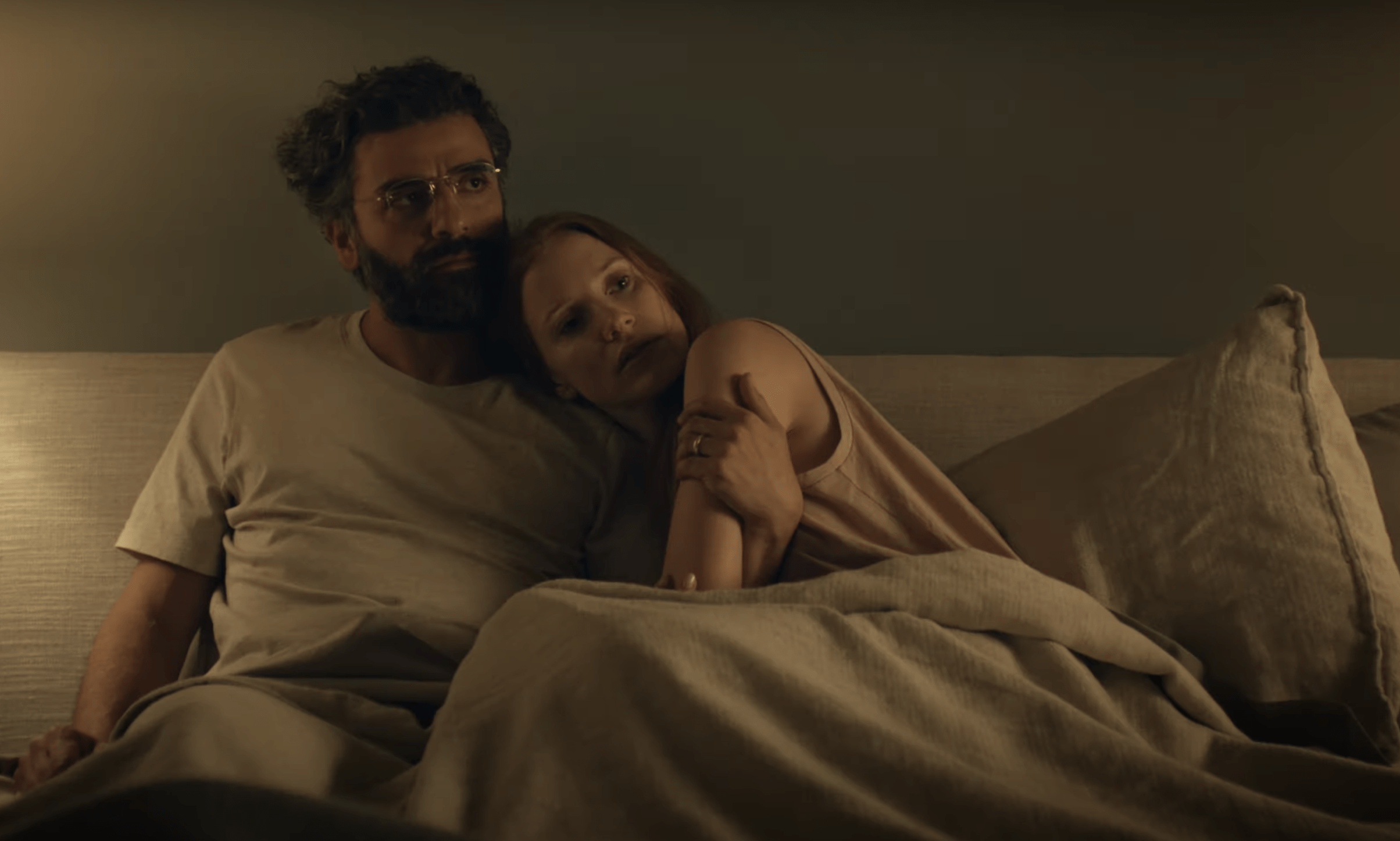 The first episode of the new version of Scenes From a Marriage is now available on HBO Max.

The series, from Hagai Levi, is a remake of the 1973 six-episode series from Swedish director Ingmar Bergman. Indeed, the first episode from the American version takes the same title as the first episode of the Swedish series, and is pretty much the definition of a remake.

Oscar Isaac and Jessica Chastain star as Jonathan and Mira, respectively, a married couple living in today’s world, struggling to find the definition of what a successful marriage is, as well as fighting with their own beliefs and how their thoughts and desires may or may not clash with their partners. Innocence and Panic, the first episode, is almost an English translation of the first episode of Bergman’s Scenes From a Marriage, with a few updates. And almost all of them reflect how much couples and married life have changed over the past forty years. An instance in which the current social climate is showcased, at the very beginning of the show, is when both characters are asked to give the pronouns they’d wish to be referred by. But that is just the tip of the iceberg. 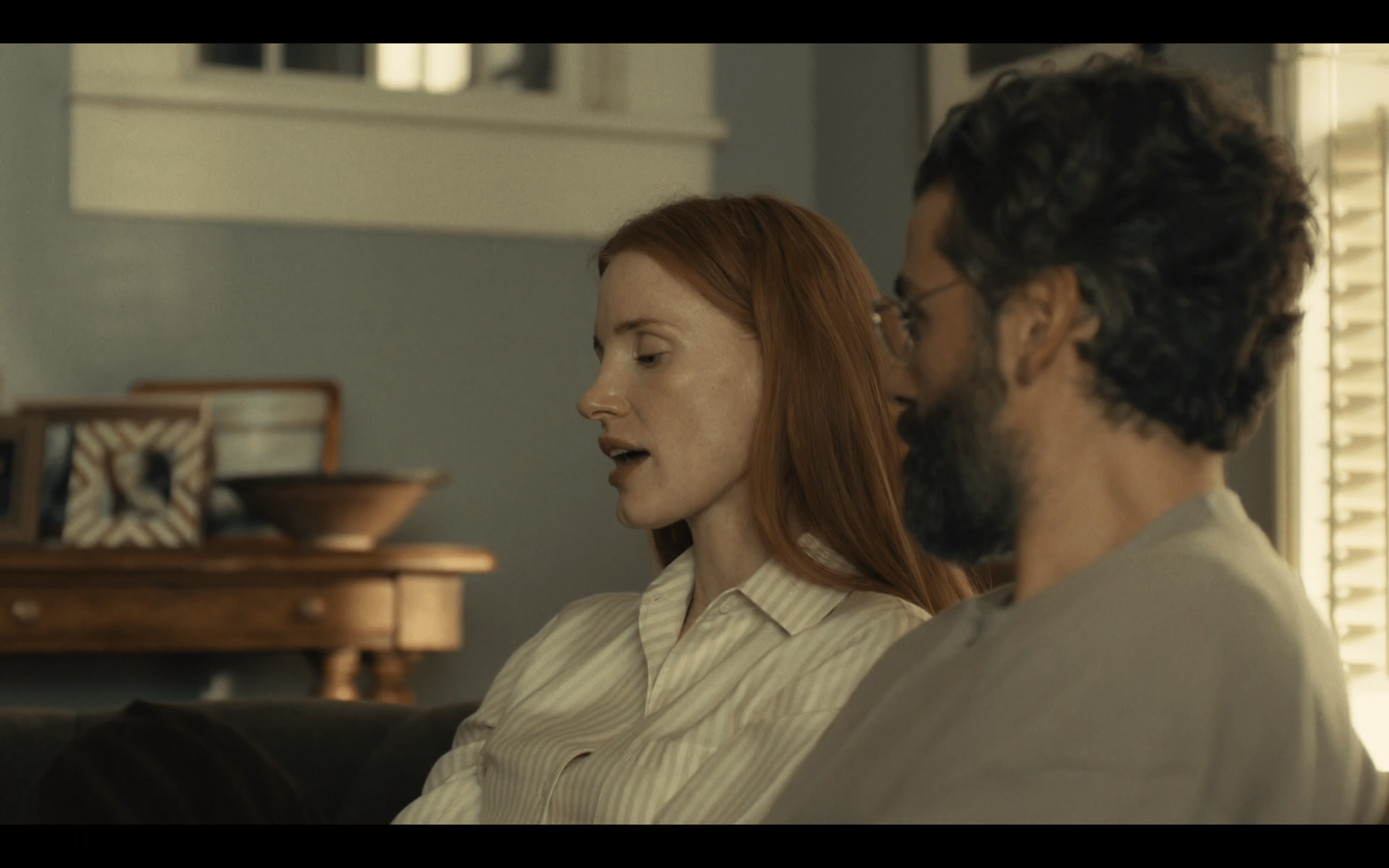 The series had a very interesting opening. In the first minute of the episode, the camera follows Jessica Chastain from behind as she enters a set, surrounded by people in masks. Your first thought as a viewer is that her character might work on film or television production, and the show is set during the COVID-19 era. But as she enters the set, she is handed a ring, the camera frames her up, the color correction is introduced, a clapperboard marks the beginning of a scene, the director shows “Action!” and the series officially begins. It is an interesting blend between the behind-the-scenes and what happens in the episode that Bergman already played with in the 1970s, although he did it by narrating the credits, not showing the main actress as herself and immediately after, as the character. The credits are not narrated in the HBO Max version.

Besides that, the episode follows the same bits as the previous version. We are not here to talk about the comparisons between both versions, though the differences themselves tell a story on their own, showing us how much writing, filmmaking, and society, in general, have changed these past few decades. Even the conception of love, which is the main question that Bergman asked the audience with his show, is brought up here the same way, but within a very different context. 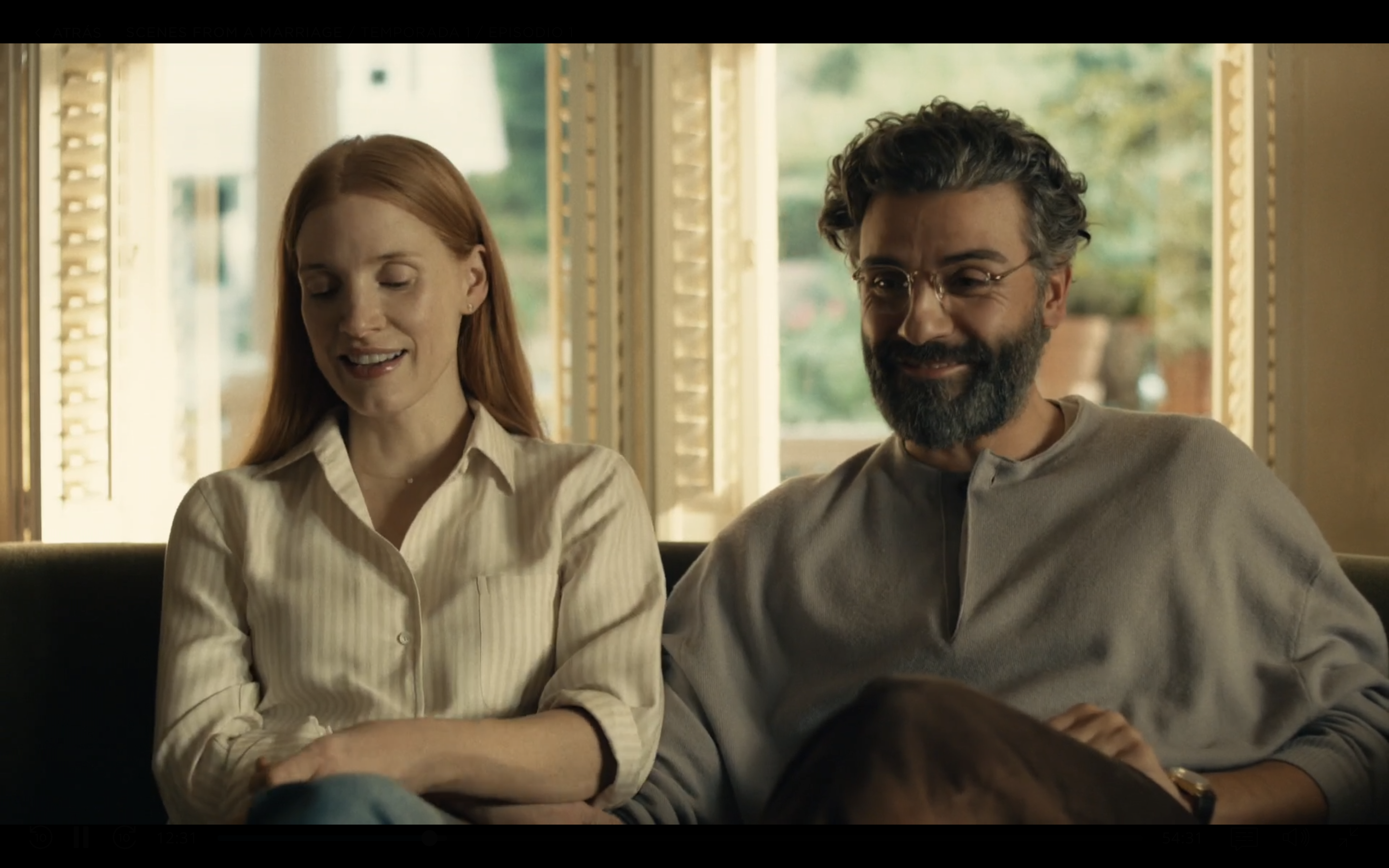 This episode is basically three main sequences and an epilogue. Four scenes from a marriage. The first sequence is an interview between the couple and a Ph.D. student (played by Sunita Mani) writing her thesis on modern marriage, with the premise that heterosexual couples where the woman is the main provider of the family are more successful in general, according to Isaac’s character. He is a philosophy professor, and as such, tends to look over some of the stuff that is brought up in the interview very excruciatingly. While many people would be satisfied with the question “What makes your marriage so successful?” and would get back with stuff like “We love each other so much,” he goes a step further and asks what does successful mean. While this moment also played out in the original series, this time around is done to accentuate the nature of his character.

At the same time, there is something else going on. Mira, Chastain’s character, is quite absent from the interview. Hints are dropped here and there that she did not want to participate, and her attention is more focused somewhere else. In fact, we don’t open the scene with the couple on the couch, but with Mira in the bathroom upstairs checking her phone, something she does again during the interview. 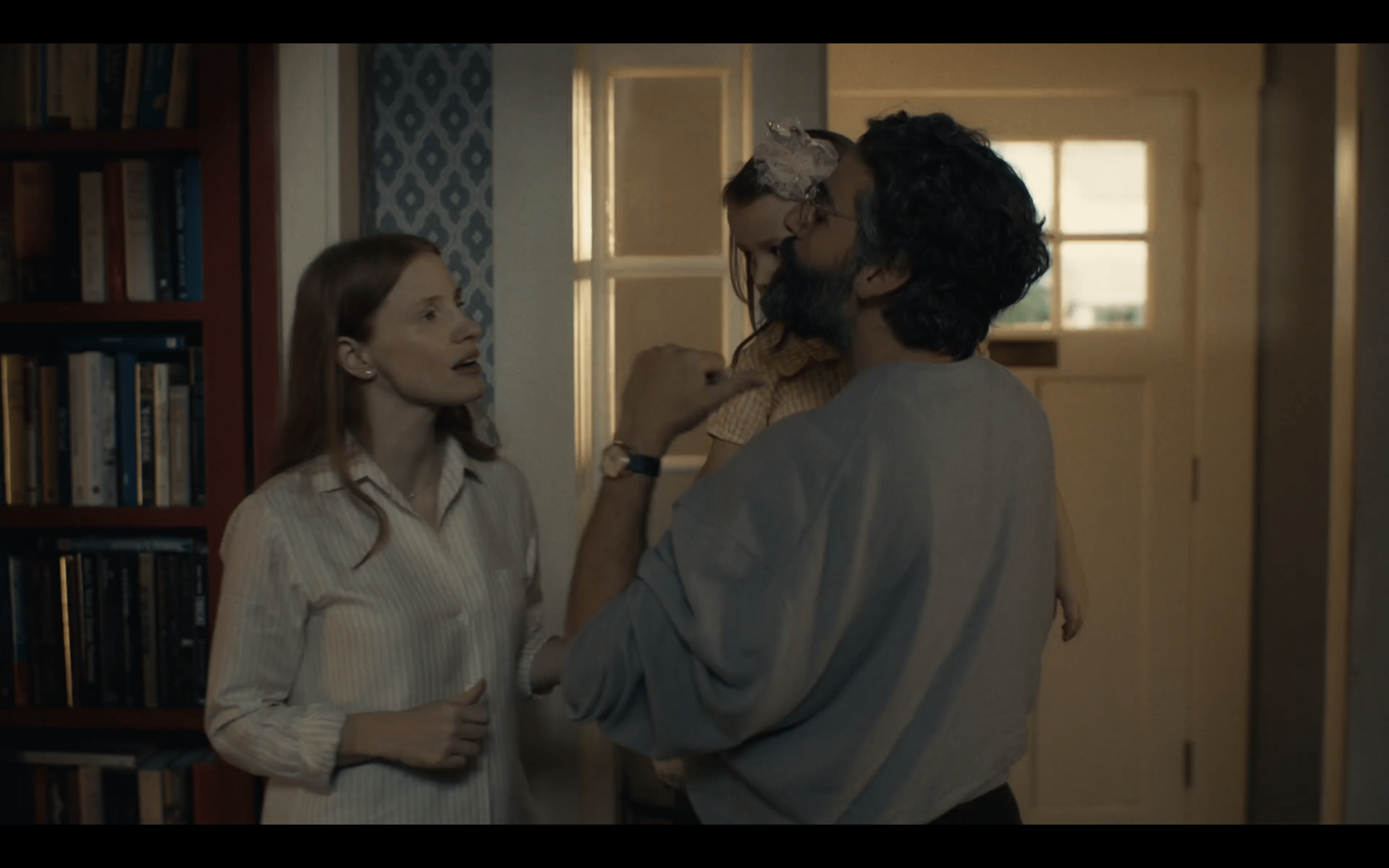 This scene plays very differently before and after we see the rest of the episode. When watching it for the first time, it almost seems like Chastain was forced there by a controlling husband who won’t even let her finish when she’s asked about her pronouns. He always takes the initiative, whether it’s because Chastain tells him to with a distant smile, or because he does it by himself. However, later in the episode, we learn exactly what happened there, and when reflecting back, it is amazing to see how much equilibrium there is between both parts.

During the first half of the interview, both characters are always shown sit on the sofa, sharing an equal amount of the screen. There are barely any close-ups, and when there are, the other character always appears in the background. The second half of the interview is done almost exclusively through close-ups, but both characters have almost an equal amount of them, and the other character is still on the frame, though out of focus. There are even moments in which the focus changes between one character and the other without changing the camera angle. Dialogue-wise, we understand why Jonathan usually takes the lead, and why Mira’s mind is somewhere else. 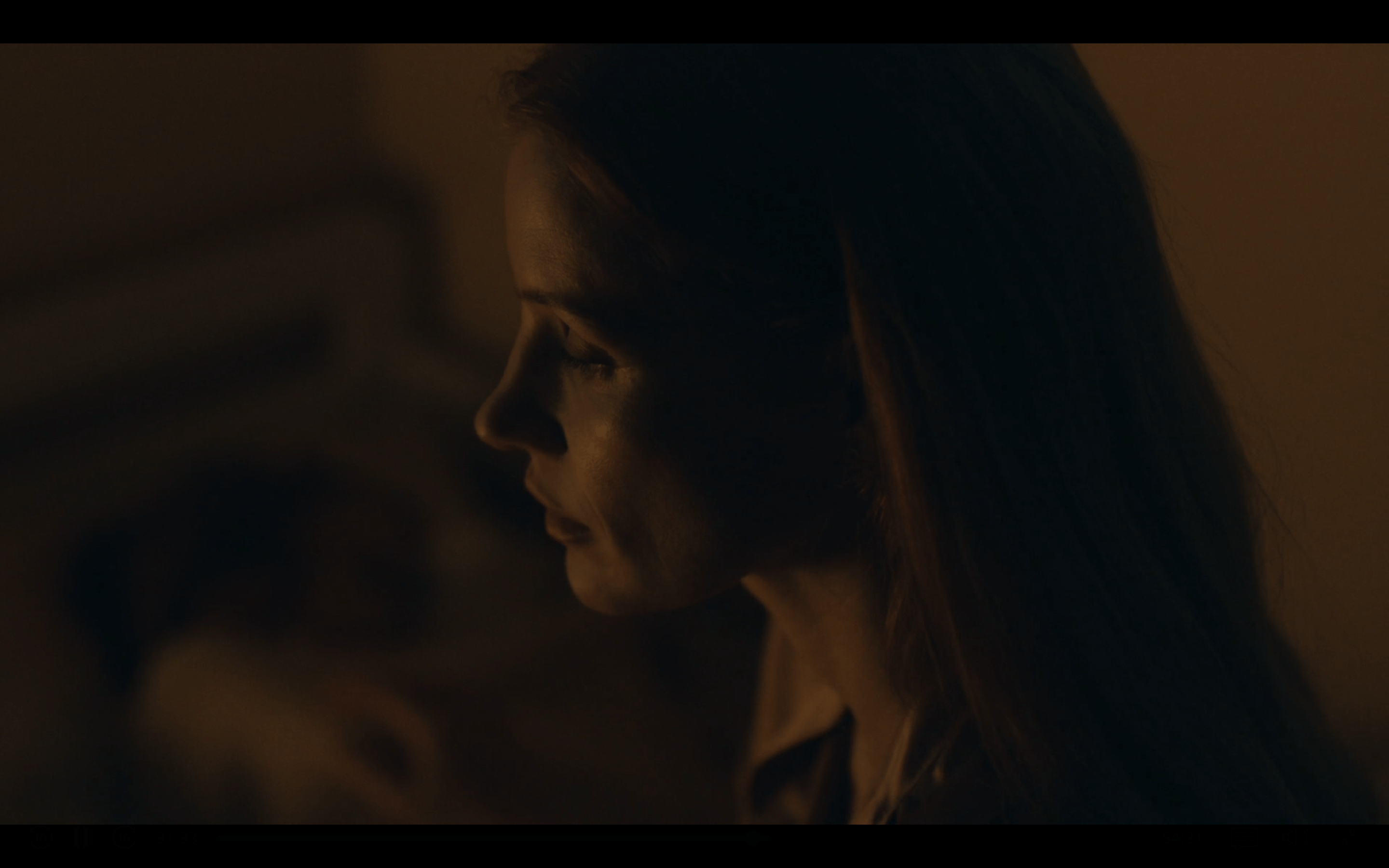 The second extended sequence of the episode is a dinner between Mira and Jonathan, and two friends of theirs, also a couple. However, there is something unique about them — they are polyamorous. Corey Stoll plays the husband, while Nicole Beharie plays the wife. They started having an open relationship as a way to cope with Stoll’s infidelity, and now the table has turned on him, as he now has to deal with his wife breaking up with her boyfriend/lover, whom she was in love with.

Beharie is extremely depressed, and her husband not showing any support on something they both agreed would support each other, doesn’t help. But in general, asks both the viewer and our main characters a lot of questions about what it means to love someone, about fidelity to loved ones, searching for happiness, and even how to cope with a situation you initiated but now evolved into something you didn’t expect. 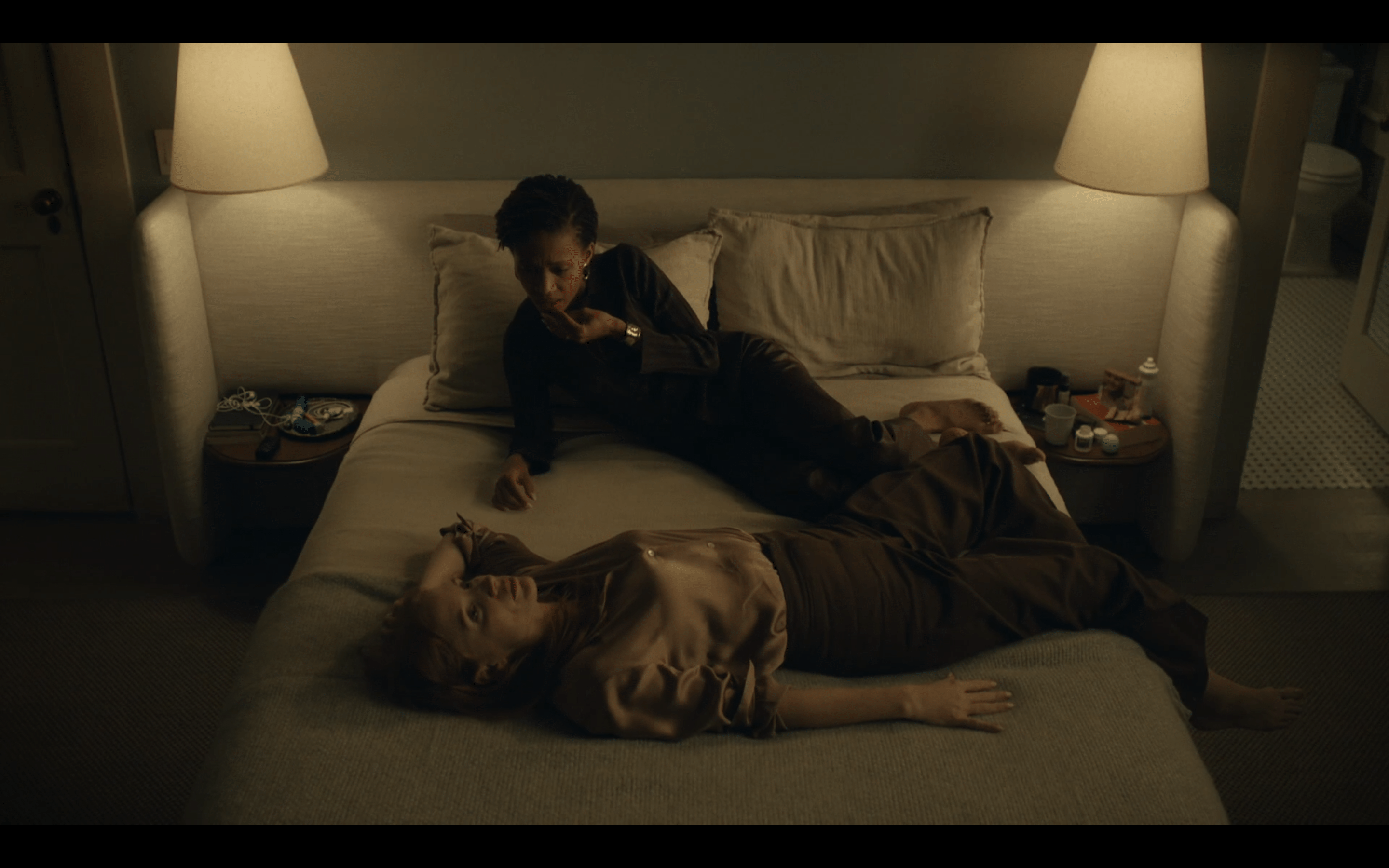 The acting displayed here is something else, from every player involved, though the peak level of acting from both Isaac and Chastain doesn’t arrive until the next scene. The last sequence of the episode is a long conversation between Chastain and Isaac in bed, and it is exquisite to watch. The dialogue is top-notch, and their performances couldn’t feel less rehearsed, and more real. It plays out similarly to Bergman’s scene from 1973, though the characters are quite different. Isaac, while still being an intellectual, is less of a robot than Erland Josephson’s character, and unlike in Bergman’s Scenes From a Marriage, we here understand exactly what Isaac feels, every step of the way.

And Mira is no less. When I say that in Bergman’s show it was harder to understand the male perspective in that scene, I don’t mean that as something negative about the show, but rather an observation. Here, they decided to play it out differently, and it worked too, just in a different manner. However, the female perspective was pretty much the same in both versions, and Chastain played it beautifully. 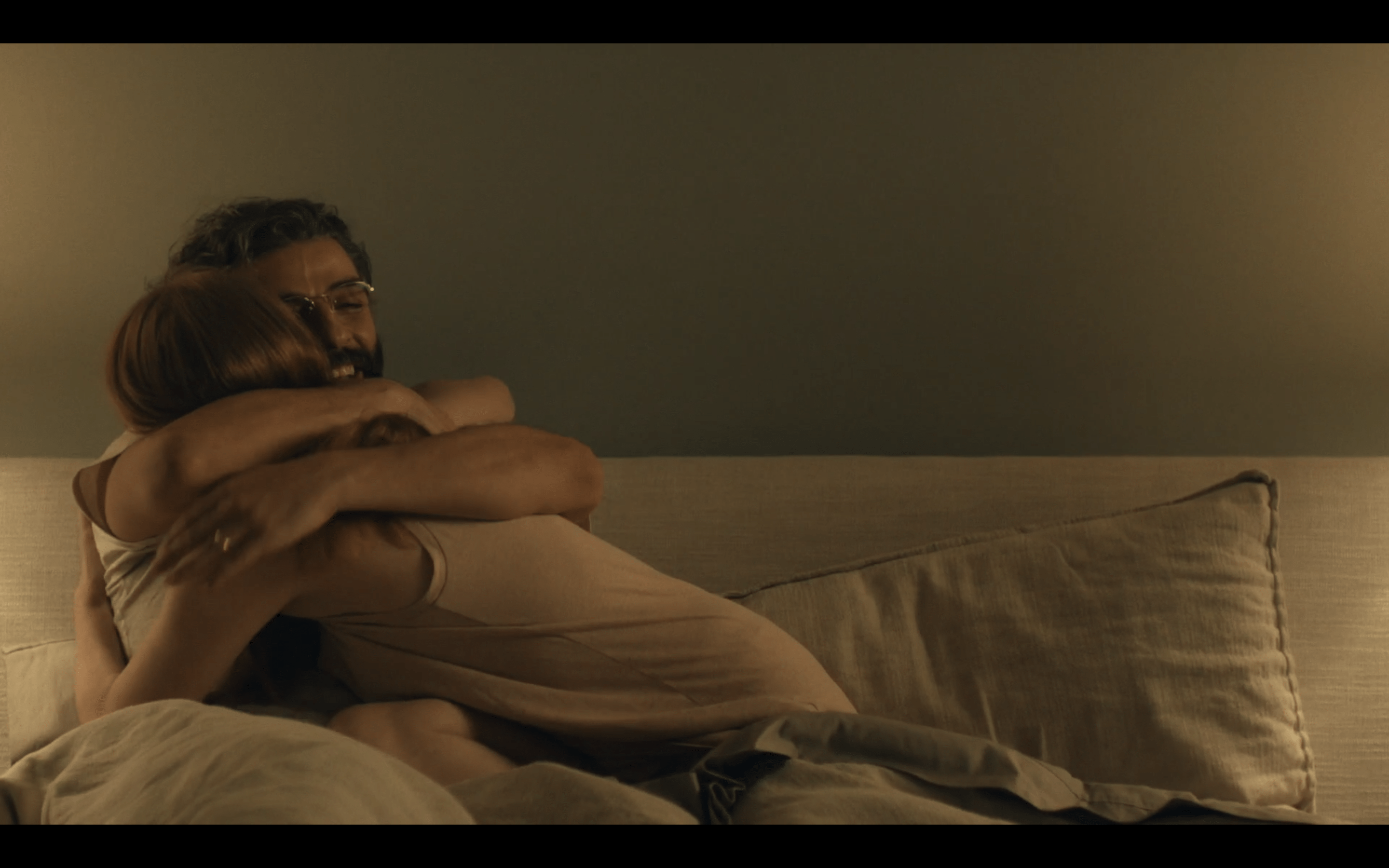 The scene has a payoff, the epilogue of the episode, which couldn’t have been more perfect. Because this is a bit more spoilerific, I’ll just say that I didn’t expect it to be as good as it turned out to be. Both characters are as human as they’ve ever been, and they have the most human reactions. None of them are the bad guys here. There is no abusive partner, no controlling member of the relationship. It is two humans trying to cope with a terrible choice and its consequences.

The first episode of Scenes From a Marriage was fantastic. It was a great remake of a great show, but it still managed to feel fresh and nuanced. I will be looking forward to next week’s episode, as well as discussing it here. See you next Monday!