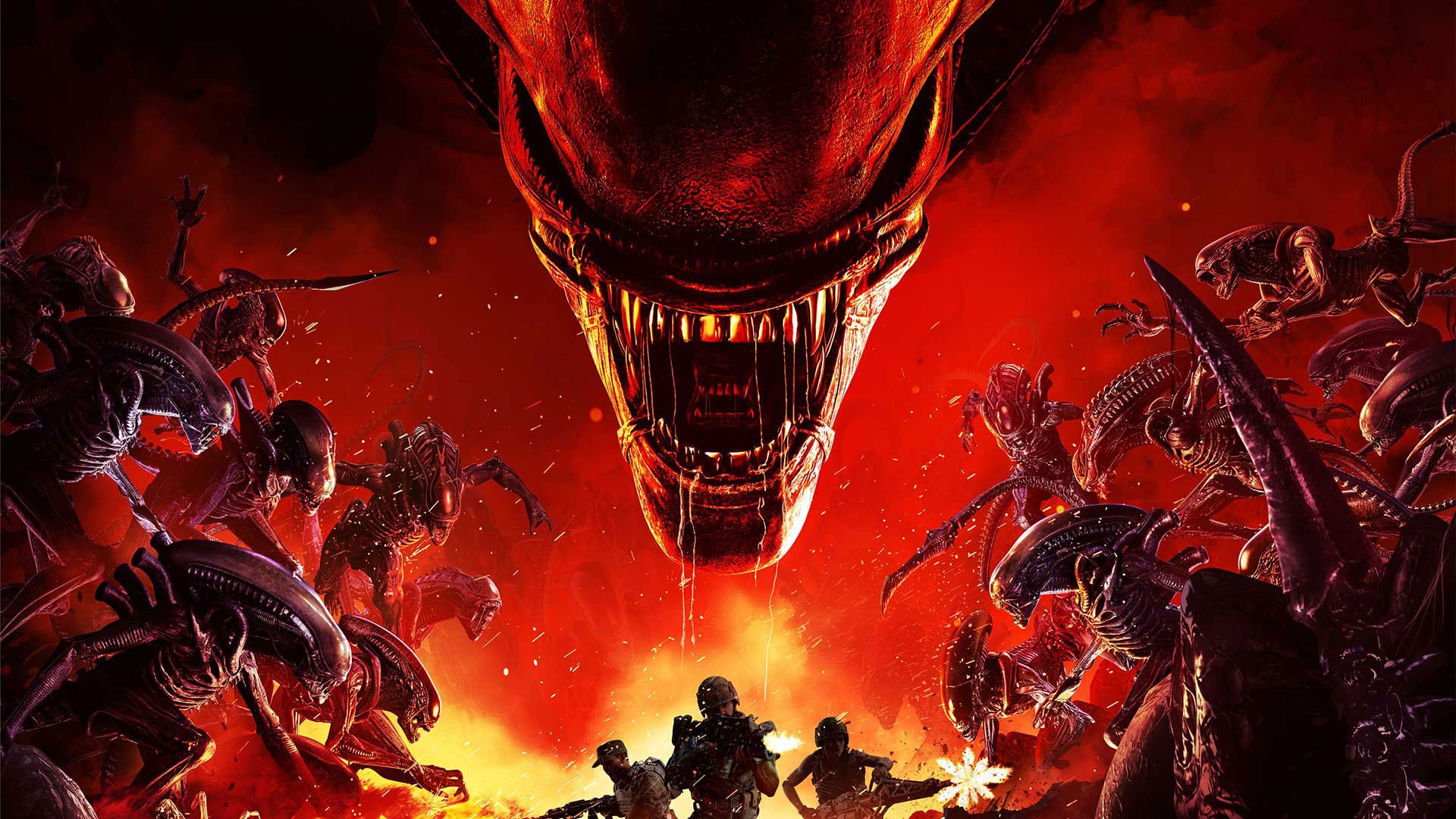 Aliens: Fireteam Elite pits three marines after massive hordes of xenomorphs, and it’s every bit as stressful as it sounds.

The Alien franchise refuses to go into hibernation despite the many shakeups that happened at 20th Century Fox in recent years. It’s simply too attractive and offers too many possibilities for films, TV, comic books, and video games. Disney, the new owner of Fox (no longer called that) and its assets, has said as much; Noah Hawley’s TV series for Hulu could be moving into production in 2022, more films have been promised, Marvel is now knee-deep into the universe, and Fireteam Elite has just hit consoles and PC. The xenomorphs aren’t going anywhere.

First announced earlier this year (and after many rumors), Cold Iron’s Aliens: Fireteam Elite is all about gunning down countless swarms of the nightmarish aliens. The game’s biggest influence is clearly James Cameron’s 1986 sequel to the first Alien — there are no slayer-in-space vibes here, just a huge army of xenos that have taken over LV-895 and a refinery station orbiting the planet. You can defend yourself and mow down more aliens than you can count. But maybe there are too many…

In many ways, Fireteam Elite feels like “what if the first incursion by the Colonial Marines in Aliens went right and wasn’t a massive failure.” The group of soldiers we follow aboard the USS Endeavor know their enemies and how to handle them. That doesn’t make their (your) mission any easier, but it’s nice to see the USCM, first introduced in Cameron’s film, actually know and be prepared for what they’re up against. After all, the game’s story is set 23 years after the three original films — Ripley is now dead, but Weyland-Yutani learned a lot about the xenomorphs over the course of those films. Of course they’re looking for them everywhere now. This premise has been explored countless times outside the films, and it always ends up badly for most involved, but here, the plot is linked to the entire Alien mythos. Boy, was I pleasantly surprised by that.

It’d have been extremely easy to play the same notes all over again and stick closely to Aliens‘ tone and pacing, but Cold Iron chose to go all in and tie it all together — I don’t want to spoil any reveals, but Prometheus and Alien: Covenant fans will be very happy, and those who didn’t fully connect with Ridley Scott’s most recent attempts might even come to terms with many of the concepts introduced by those divisive installments. 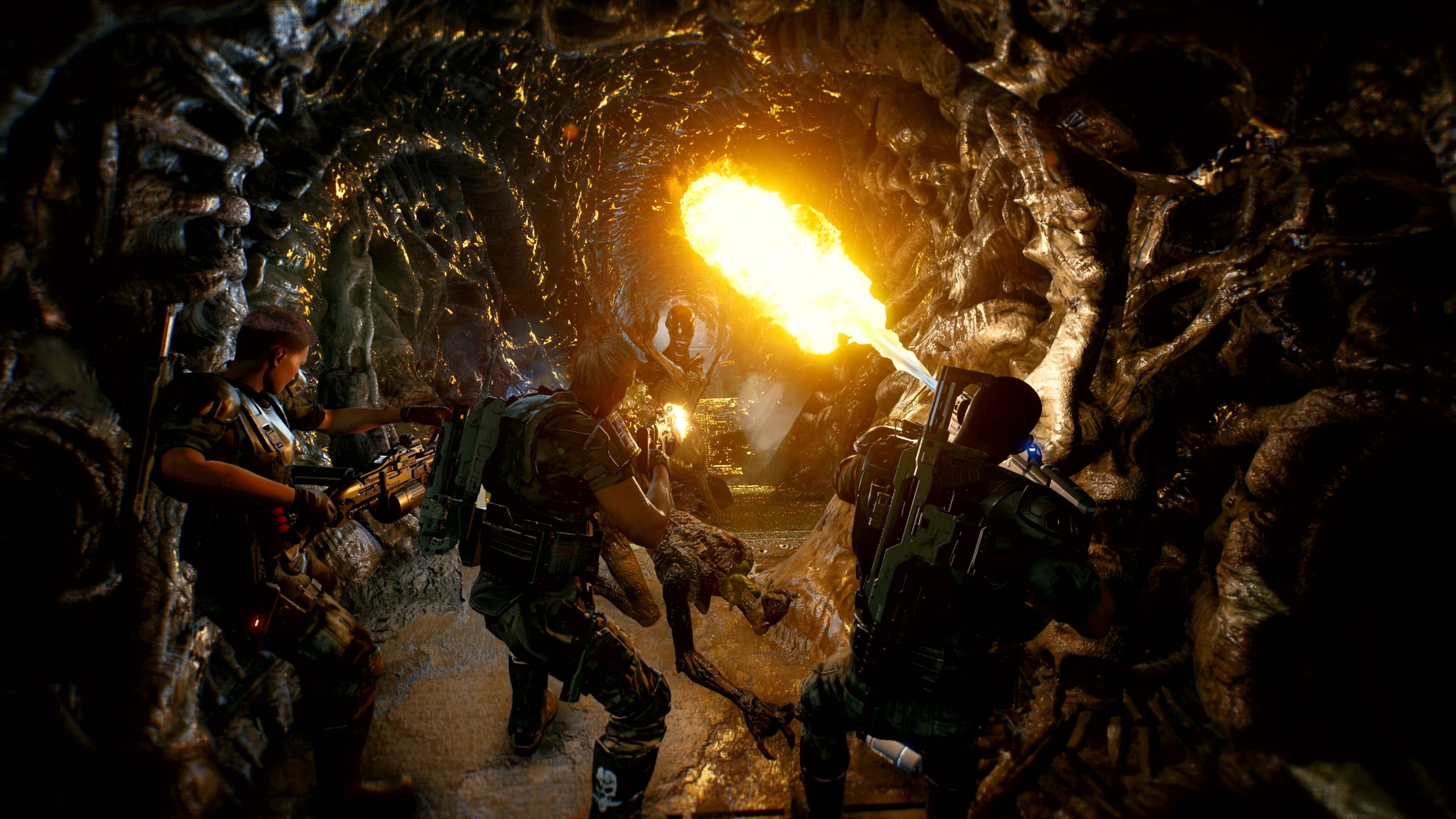 Gameplay is fairly straightforward: the game’s a third-person shooter with basic movement and cover mechanics. Besides your two main weapons and a backup firearm with infinite ammo, each class has two active abilities, such as firing a salvo of rockets or deploying a portable health station. Right now, there are six classes available in the game: Gunner (standard soldier), Demolisher (can carry heavy weapons, packs artillery), Technician (all about turrets and traps), Doctor (the name says everything), Recon (offers support and buffs/debuffs, unlocked once you first beat the game), and Phalanx (close-quarters fighter that uses a riot shield, introduced in Season 1 for free). I’ve personally stuck with the Demolisher class for the duration of my pre-review game time, as I freakin’ love the M56 smartgun.

Each class has its own progression and can be upgraded, and the same goes for all the weapons — the selection is wide (with more coming), and they can be customized and improved. Moreover, there are pickups and consumables which are found scattered throughout the levels and can be bought in the ship’s store (no microtransactions, it takes in-game currency). I was pleasantly surprised by how robust the game’s progression and customization systems are — it never goes overboard, as it’s a co-op shooter without a lot of variation after all, but it’s packing enough options (with more on the way) to keep things fresh for a while. “Challenge cards” also make things interesting and can alter in big ways another run through a mission you already know. For those who want to get their asses kicked, difficulty levels go waaay up too. I had some hard times in Standard if my companions weren’t too bright, so I can only imagine what’s going on three levels above that. 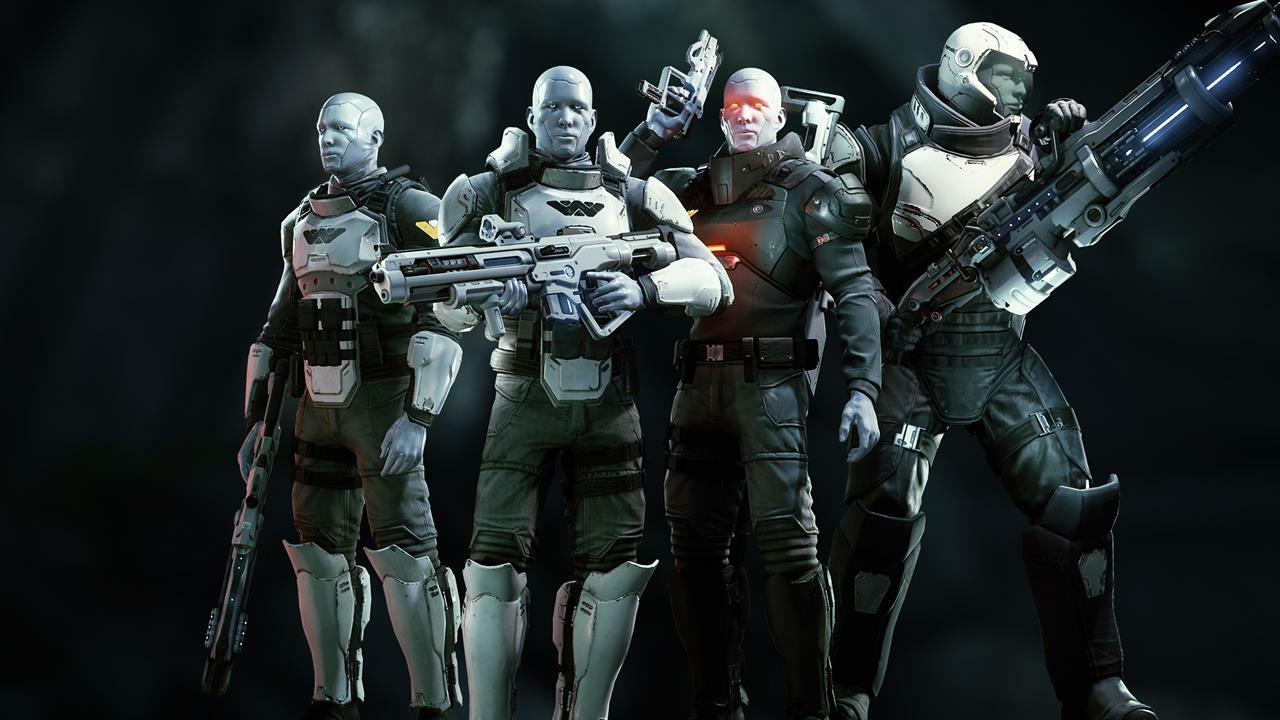 Surprisingly, the enemy variety is vast as well. Asides from the regular xenos, drones, and warriors (all of which have been featured in the films), Cold Iron designed quite a few “evolutions” of the aliens that make things a lot harder for the three-man squads (made up by two other players or bots). Fireteam Elite borrows quite a bit from other “horde shooters” such as Left 4 Dead or Killing Floor; special enemies are there to break the pacing and impede players from getting too comfortable. Beyond that, hostile WY synthetics are present in some missions. I won’t spoil why they’re there, but it was great to see the folks from Cold Iron borrowing some designs and ideas from Creative Assembly’s Alien: Isolation, a completely different game that nonetheless was another amazing addition to the franchise. Things also get very weird in Act 3, and there are some insane surprises stored in there for diehard fans.

Speaking of the missions themselves… The levels look amazing, and I cannot applaud enough the work done by the level designers and artists, but the gameplay flow is a little too samey. Granted, this is one of the subgenre’s weakest points by definition, but other games managed to be smarter about the replayability of their maps. Here, as I mentioned before, the progression and card systems do a lot of heavy lifting, since the missions rarely stray too far from “go to point A and then B, set up defenses, clear a massive horde.” Some maps are so different visually and geographically that they almost manage to break that feeling of repetition though. I wish Cold Iron had introduced some unique set pieces or alternative paths — slightly randomized enemy placement and measly loot aren’t enough in the long run. The post-launch support (all of the playable content will be free) is looking good, but the game’s gonna need new missions and/or game modes (a PvP mode wouldn’t be hard to implement) ASAP. This is an AA release and not a massive project (its price tag reflects that), but even the biggest fans will quickly move on if the backbone of the experience stays rigid.

I found the sound effects and the overall mix to be top tier as well. Plenty of them have been directly lifted from the films, but the new additions (mostly for new guns and xenos) “click” together and don’t stick out. The Alien universe has very distinct looks and sounds, and I’m glad they managed to expand on everything without messing with the overall aesthetic and mood. In the same way, the original soundtrack by Austin Wintory is a great evolution of James Horner’s music for Aliens that often sounds surprisingly drummy and Predator-ish. It’s not a continuist musical work at all, yet it plays nicely with this new take on the material. 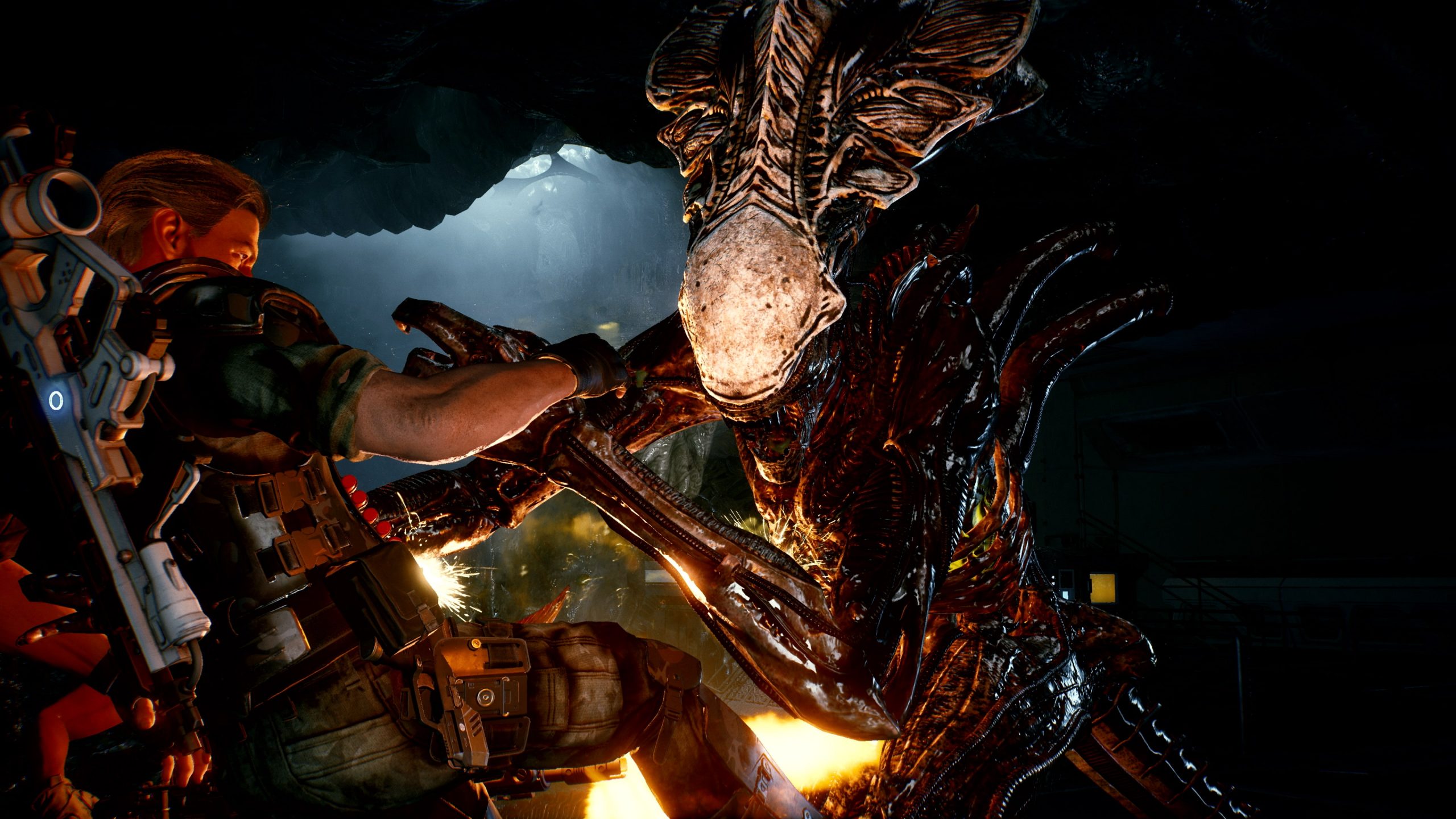 As you can probably tell, I really like this game from a fan’s perspective. It’s a love letter to the Alien franchise as a whole. While the 1986 sequel marked the IP forever across media with its treatment of xenomorphs as an overwhelming insect-like species which can quickly consume an entire planet, some of the ideas introduced by newer entries were too good to ignore. Somehow, Cold Iron weaved it all together and even included xenos which are sneaky and tough one-to-one adversaries. It also feels like the definitive Colonial Marines experience most of the time, deleting every bad memory of Gearbox’s 2013 mess of a game. That being said, I couldn’t ignore some extremely serious technical issues…

Aliens: Fireteam Elite has released on the new consoles as well as last-gen hardware. But performance is all over the place on PS4 and Xbox One systems. I’m making the jump to PS5 soon (if I can get my hands on one, that is), and we didn’t receive a PC code for review purposes, so this review has been done with the PS4 version of the game. And it’s not been a smooth experience at all. Some of the game’s overall jumpiness is clearly tied to online servers that have been overwhelmed since it released in late August — that can be fixed. But last-gen consoles, at least the base iterations, weren’t 100% prepared for this game.

Fireteam Elite is not a looker despite its excellent art direction, but it clearly puts a lot of stress on the CPU and, especially, the old HDDs used by PS4 and Xbox One; stutters are too frequent, and some small sections brought the framerate to single digits — I’m guessing the latter issues can be patched and have to do with crappy code, as the framerate is bearable most of the time. But other stuff isn’t going away. I highly recommend waiting for a deep sale on older consoles, or maybe jumping on the game if you’re a big fan who’s making a hardware upgrade soon. PC gamers should be good to go as long as they meet the recommended requirements. Cross-play isn’t a thing here either, and that’s a big L at this point in time; the game will match together players from the same family of platforms though — the next-gen upgrade is free as well, so you’re getting the best possible version of the game even if you own a last-gen copy.

If you’re into horde shooters and/or consider yourself to be a big Aliens fan with access to a beefy PC or current-gen hardware, this is an easy recommend. Otherwise, maybe hold off and see where it gets after some patches, but keep in mind it wasn’t built with 2013 hardware in mind. Aliens: Fireteam Elite doesn’t go to new places as a co-op shooter, but what you’ll find inside is exactly what the cover advertises. And that’s more than enough sometimes.

Aliens: Fireteam Elite is now available on PC (Steam), PS4/5, and Xbox systems for a recommended price of $39.99 (with some good discounts happening already).

Thanks to Cold Iron, Focus Entertainment (publisher), and Tara Bruno PR for the review code.