‘The Forgotten City’ Review: Against Time and Divinity

The Forgotten City welcomes anyone seeking refuge, but all that glitters is not gold.

Among the onslaught of indie titles hitting this summer, Modern Storyteller’s The Forgotten City aims to make curious players hit the brakes for a bit and spend some time wandering around a mysterious Roman city and getting to know its inhabitants. The game is a remake of the massively popular 2015 mod of the same name for The Elder Scrolls V: Skyrim. It has been built from the ground up with Unreal Engine 4 over the last four-and-a-half years, plus the three years it took Nick Pearce (head of the studio) to create the original mod, and special attention has been paid to the human characters, who are fully animated and voiced, and the veracity of the Roman setting.

Modern Storyteller is now a three-person studio with external collaborators, and this game is their true first step into the world of indie games. However, the project has received lots of support thanks to the success of the Skyrim mod that started it all — it even won a National Writers Guild Award in Australia in 2016. This allowed Pearce and his newfound colleagues to transition to full-time development. 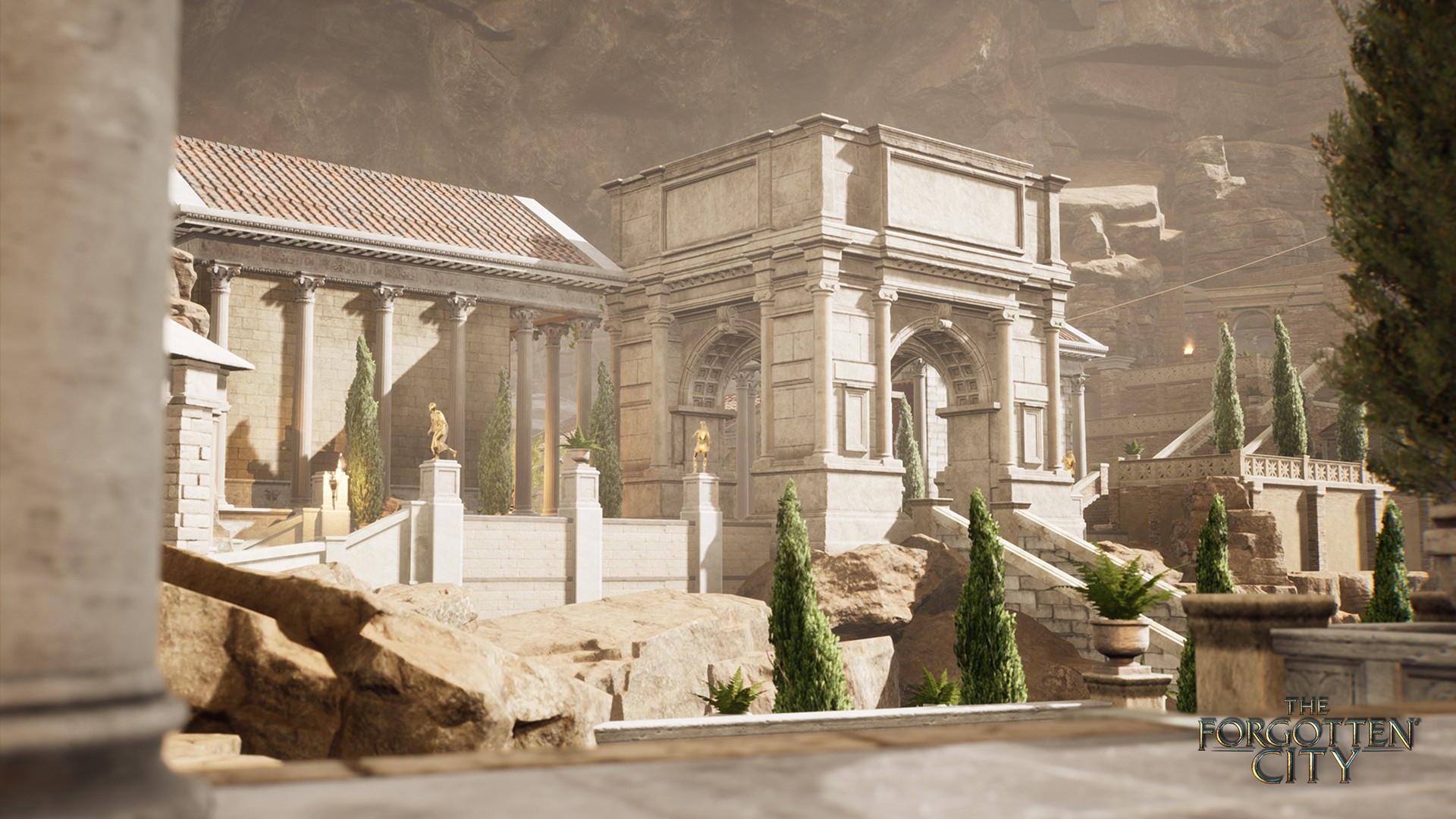 The Forgotten City is captivating from the get-go: after being awoken near a river by a mysterious woman, players must venture into a cave system and find some old ruins and an enigmatic portal which sends them back in time to that same spot during Roman times. Of course, the principal objective throughout the game is to escape the city and return to your era, but things quickly get very complicated — an unknown Golden Rule created by the gods governs the city, and a simple sin could doom its entire population. If that happens, the portal from whence you came reopens, but it’s only a pathway to relive the same day over and over again. Escaping this city requires resolving the mystery behind this divine rule and (maybe) saving the people who live there.

Combat isn’t a big element in this game, and is limited to sections of gameplay which feel strategic and never too tense. The Forgotten City is all about human interactions and exploration, jotting down small notes and looking to fix problems which can help fix bigger problems. Much like the titular city, which is wonderfully designed, the inhabitants are all connected in many ways. Getting to know them in depth (for better or worse) is the key to solving the riddle that threatens everyone.

In many ways, the game plays like a whodunit. Only that person hasn’t done it… yet. And you don’t know what they did to anger the gods. The fact you’re there trying to fix that situation means someone did it. As a result, you know the Golden Rule, which turns all people in the city into golden statues if broken, is not BS. Some of the folks living there in Roman times believe this legend, but others don’t and therefore want to change things. That’s the first problem… and kinda feels like a ticking bomb waiting to blow up. There are many ways to approach all this, but taking advantage of the loops and the stuff that you’ll learn (and find) is pretty much the bread and butter of the main quest. 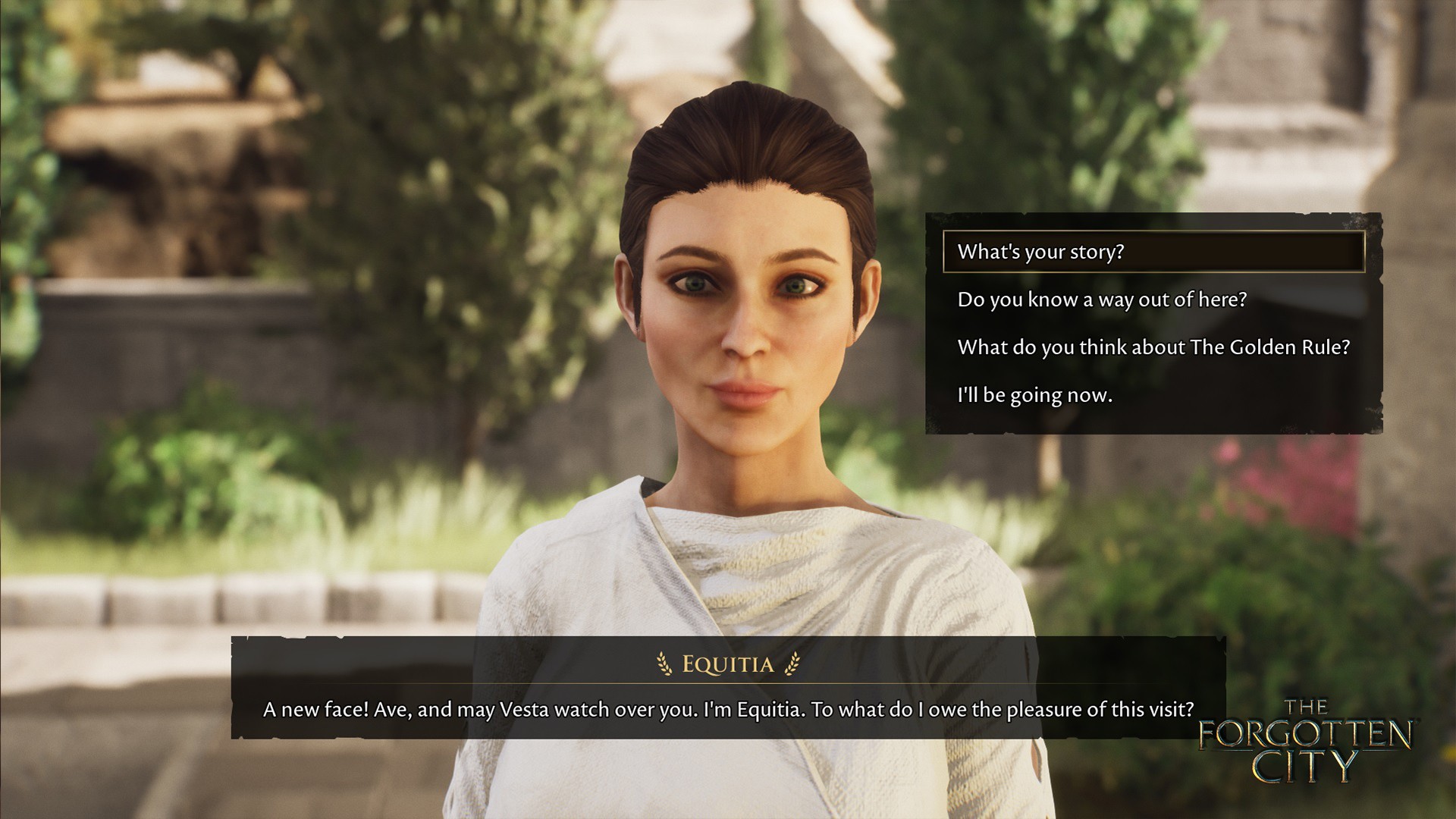 Time loops could (in theory) easily be exploited, and The Forgotten City fully acknowledges that. In more than one occasion, finishing a secondary quest involves resetting time and/or playing upon the characters’ obliviousness to what happened in another timeline. In the same way, you can quickly become rich by taking money from the same chest repeatedly (for example). While the story is finely threaded, the game rewards getting creative and often requires players to think outside the box. It’s an impressive feat in game design (and writing) that has been wonderfully remade for veterans and newcomers alike.

I also grew quite attached to most of the city’s inhabitants over the course of my playthrough thanks to the solid facial animations and wonderful voice acting. The Forgotten City is no triple-A release and doesn’t run for more than nine or ten hours if you’re a completionist, but it packs an impressive level of ambition and overall polish. This becomes even more apparent during its final strides, especially if you pursue the game’s true ending (out of four possible ones), which will probably make your head spin and feels like a must-achieve if you want a real conclusion with an added emotional punch to the face. 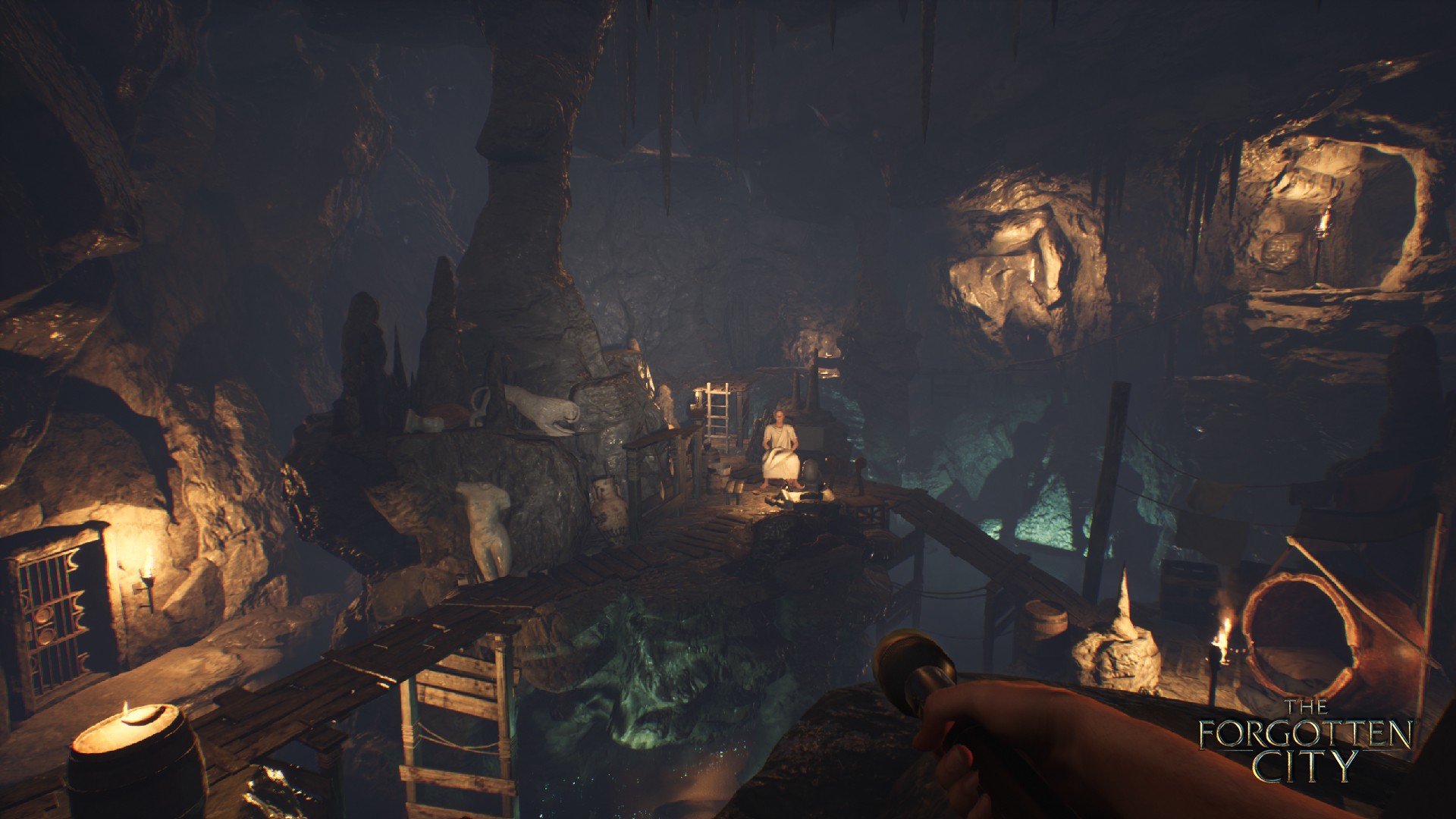 I could go on and on rambling about some of the game’s amazing characters (Galerius, my man) and original soundtrack, or maybe detail its more exploration-heavy bits, but I feel like being more specific would automatically take value away from the experience. You should go in as blind as possible (and with a lot of curiosity) in order to get the most out of The Forgotten City.

There are some movement-related janks and small graphical glitches that should get sorted out soon, and this definitely isn’t a game for everyone, but it’s an easy recommend for any gamer (casual or hardcore) looking for a nice change of pace with one of the most interesting and well-written interactive stories in recent memory. I reviewed a PC copy of the game, and performance was fine in most situations on a computer which is far from the current top tier hardware; I can’t speak about the performance and stability in the console versions, but the review build for PC felt solid enough and never crashed on me.