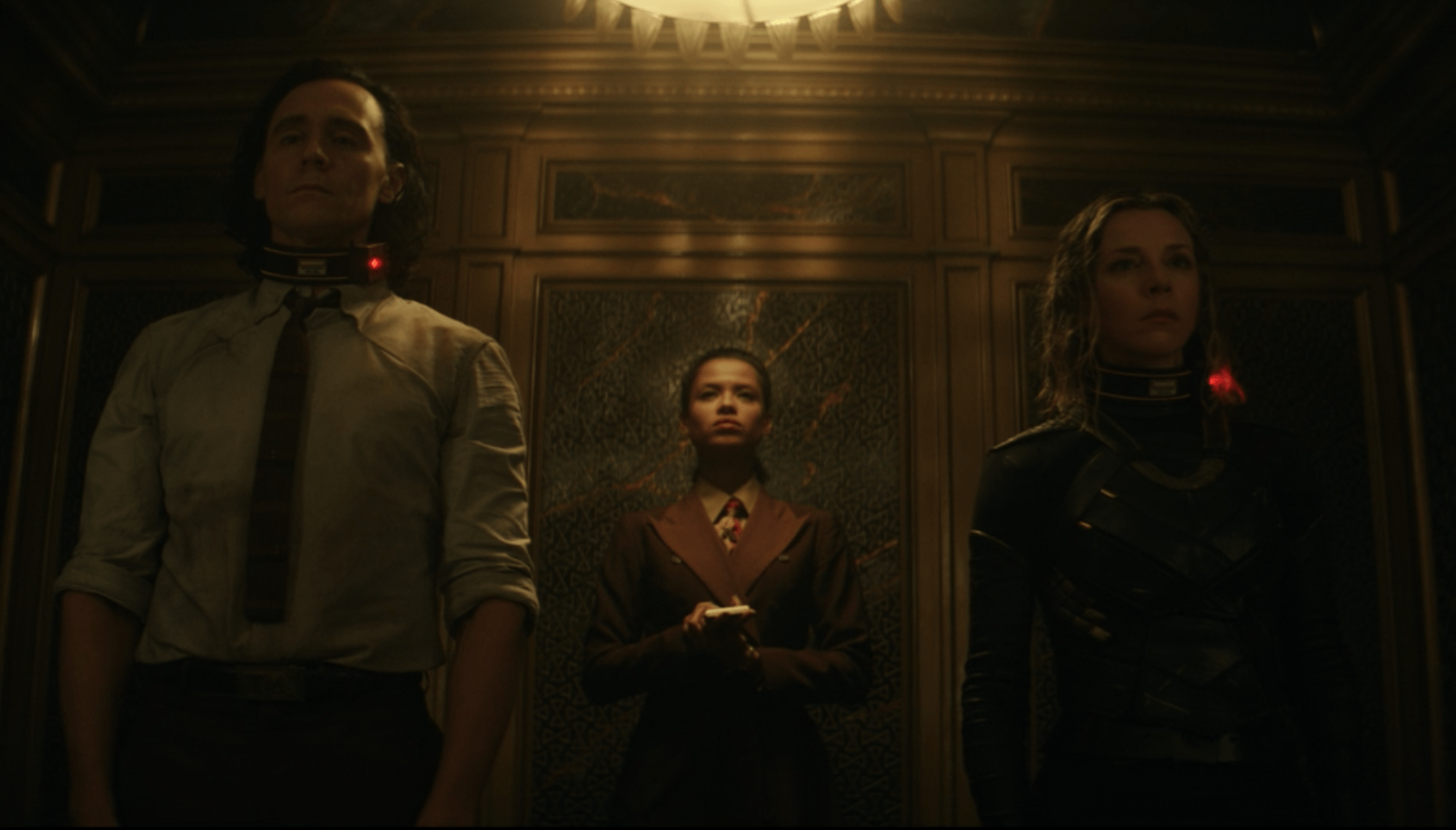 After a character-driven, if not slightly underwhelming third episode, Loki returned with a bang this week in The Nexus Event.

The Nexus Event was far more story driven than Lamentis, advancing the plot forward in ways that I didn’t think would happen until the next episode. There were some big moments and reveals in this episode, some working better than others, and the stakes were upped in a big way.

This episode also benefitted from the return of all the main characters who were missing last week, with Owen Wilson’s Agent Mobius and Gugu Mbatha-Raw’s Ravonna Renslayer enjoying some of the most fascinating scenes and big dramatic moments of the series so far. It all culminated in a cliffhanger even greater than the one we were left with in The Variant, plus a juicy post-credits scene.

Not all of the personal developments between characters worked that well, though. The season’s short length of six episodes means that some of the romantic and platonic relationships feel a bit rushed and unearned. Thankfully, they don’t overshadow the episode’s bigger moments, and The Nexus Event ends up being the best episode of Loki so far. 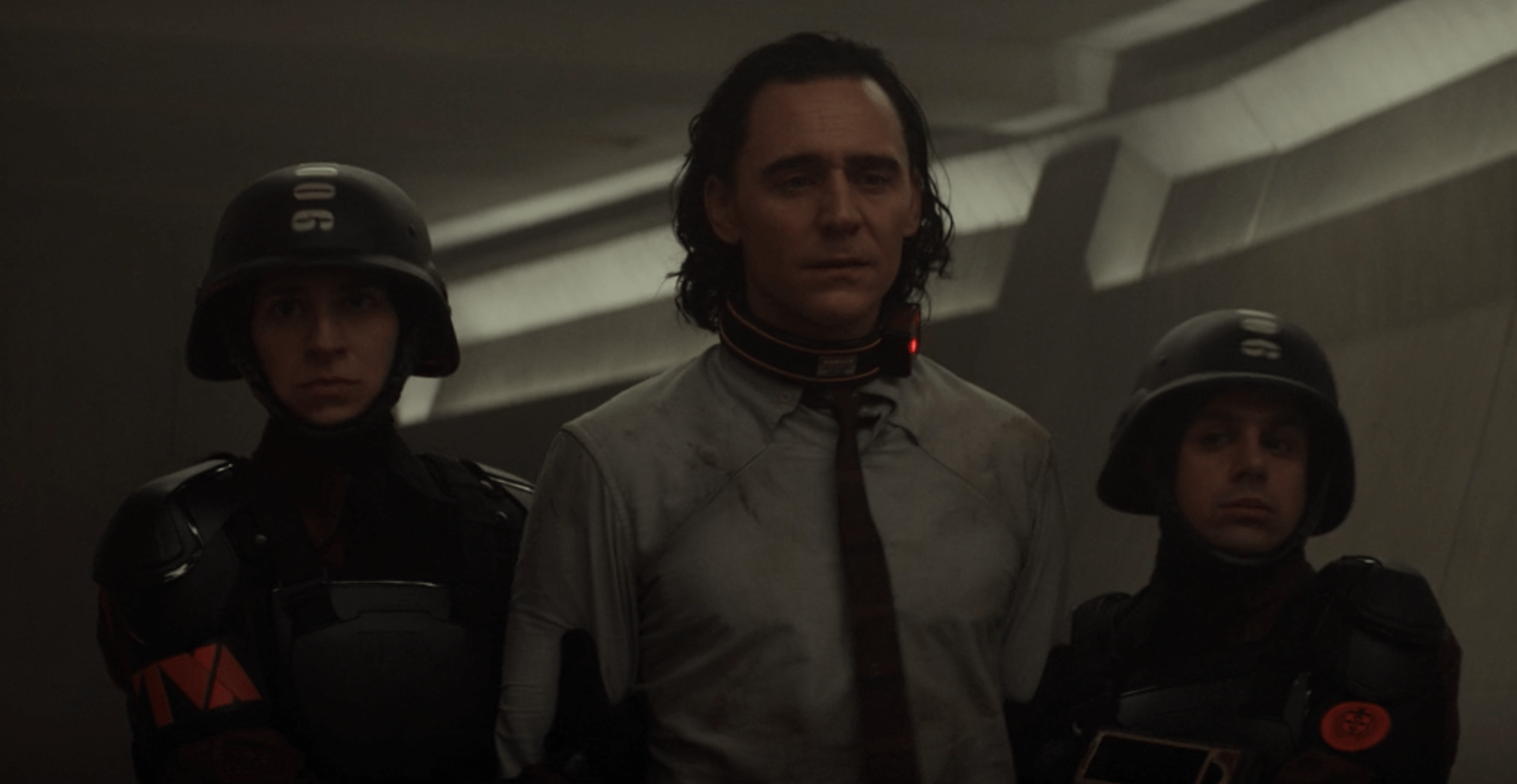 The episode started off with a glimpse of the Time Keepers, appropriately setting the tone for an installment full of big moments. That the Time Keepers seemed to be real almost felt like a reveal in itself, as it had seemed that the series was getting ready to reveal that Ravonna had been lying about their existence all along. Of course, that did end up being partly the case with the reveal that the Time Keepers were merely one-note androids acting out their programming.

It seems clear that this is why Ravonna was so determined not to let anyone meet them; it wouldn’t have been long before someone questioned their authenticity. It does seem odd that she would bother bringing Loki and Sylvie to them though, unless someone else was speaking through them. Anyone familiar with Ravonna’s comic history can hazard a guess at who that might be… 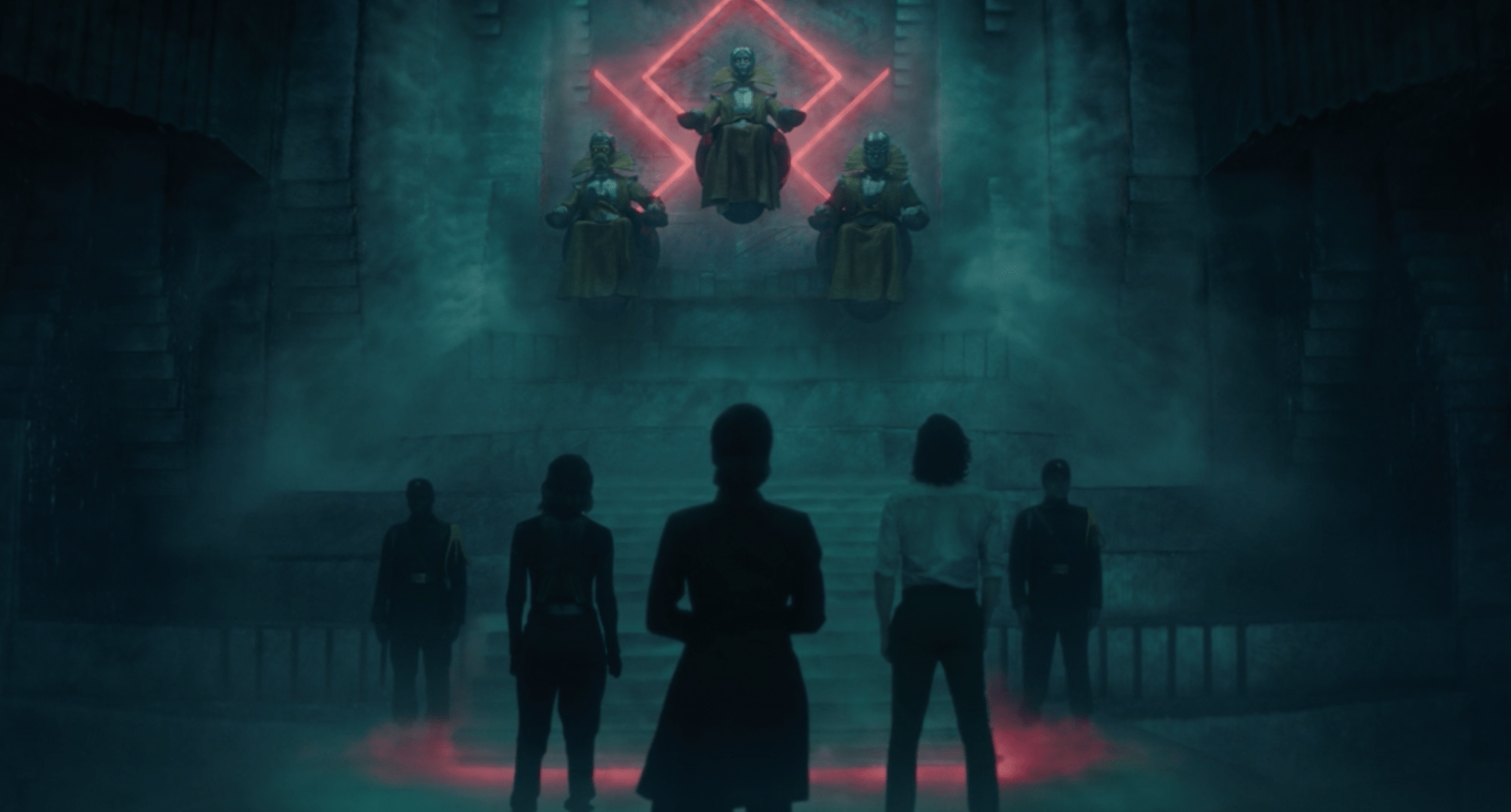 In a flashback to Asgard in another timeline, it was revealed that Sylvie’s only crime seemed to be simply existing. She asked Ravonna later what caused the nexus event that deemed her worth executing. Renslayer smugly claimed she couldn’t remember, but it seems likely that the Time Keepers (or whoever controls them) were trying to prune all the different Lokis of the multiverse, deciding that the one played by Tom Hiddleston should be the “one true Loki.” I suspect that reveal is coming next episode when Ravonna spills the beans to Sylvie.

Speaking of Sylvie, let’s talk about her blossoming relationship with Loki. They shared a tender moment as they both awaited their imminent death on Lamentis-1, and I have to say that I didn’t see Loki falling for her. For all their bickering, I thought they were merely reluctant allies and would only become friends at most. The heavy implication that Loki has developed romantic feelings for her feels a tad rushed, given that it didn’t come across that way in the previous episode. We can put that down to this season’s short runtime, forcing relationships to develop at an unnatural pace. 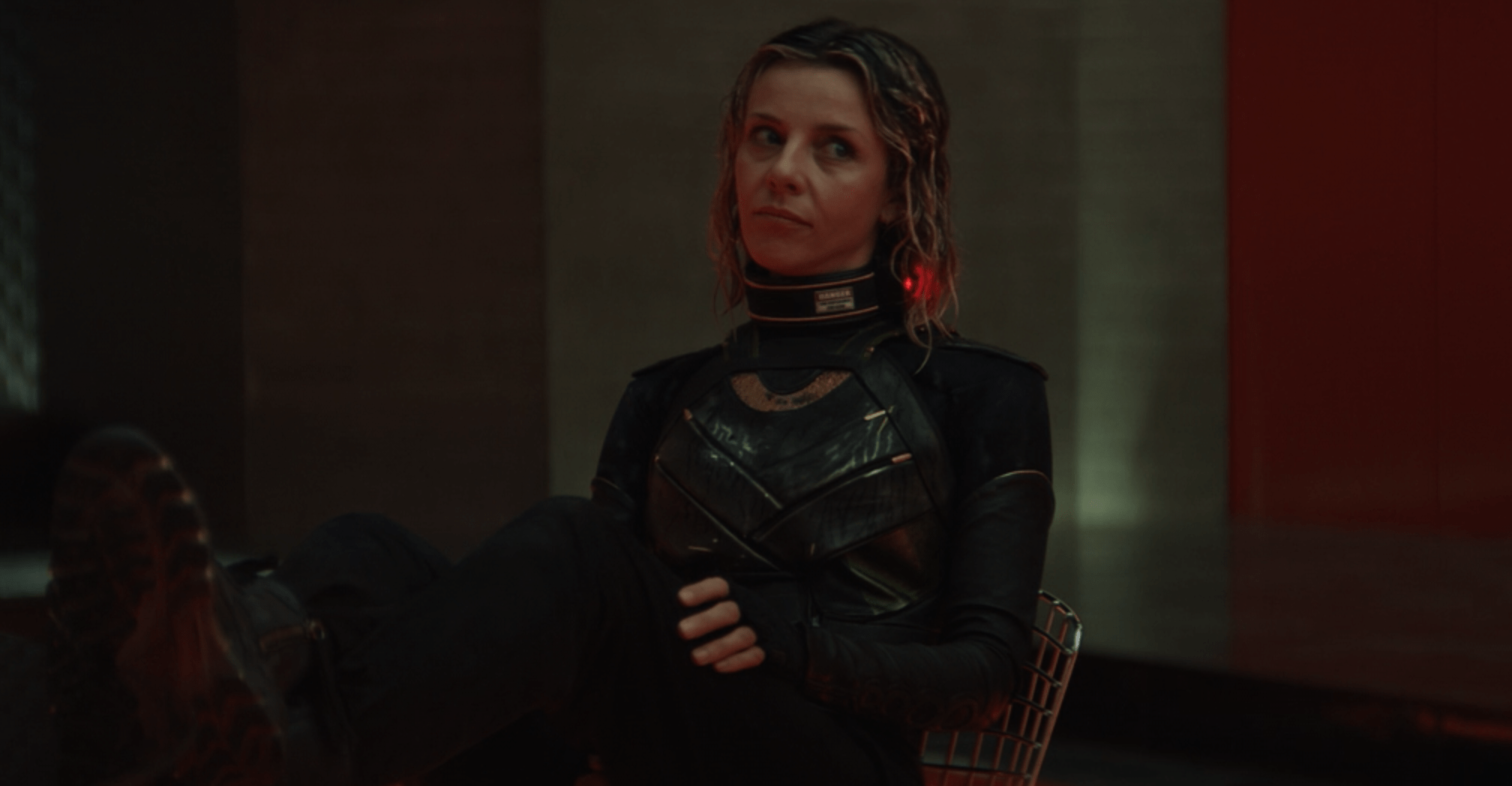 However, it is wonderful that the first character we see Loki fall for in the MCU is literally himself. He admits in this episode that he is a narcissist, and this romantic development is the most narcissistic thing he could do. It’s not clear if Sylvie feels the same way though; she looked vaguely terrified that he might actually lean in to kiss her later in the episode, suggesting that Loki’s love might be unrequited.

Thankfully, the two of them are rescued/captured by the TVA, and we get the welcome return of Agent Mobius, who promptly gets to work interrogating Loki after being denied the opportunity to speak to Sylvie. This is when the episode starts to build gradually towards its climactic final act. Mobius finds it odd that Ravonna refuses to let him speak to the variant he’s been hunting for so long, as she hides behind the Time Keepers and concerns for his safety as an excuse. 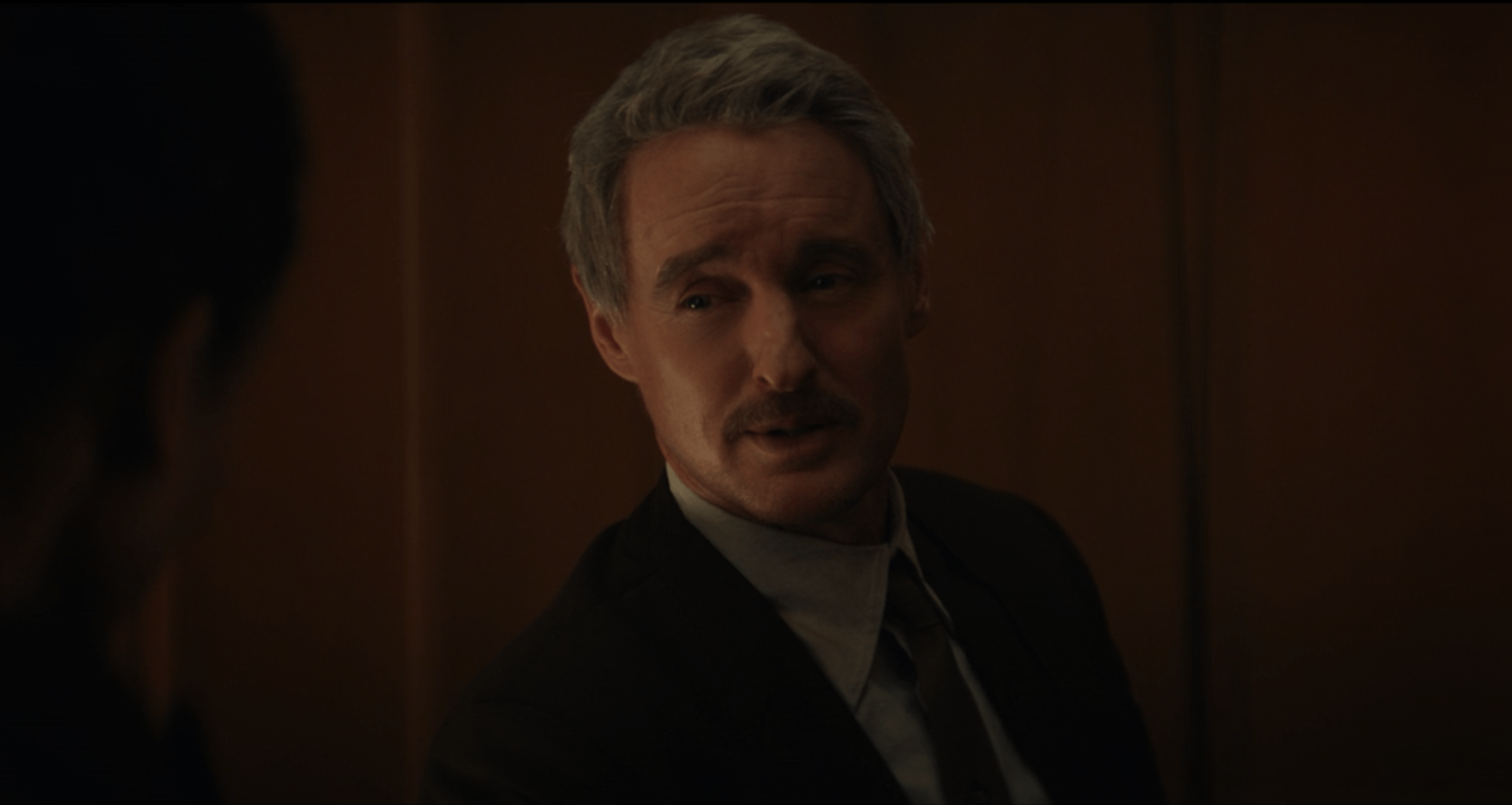 As soon as Ravonna tells Mobius that Hunter C-20 is dead, something immediately feels off, and he knows it. Her excuses and explanations don’t track and immediately trigger red flags in his head. Unfortunately, he’s also a pretty bad liar himself, as his hasty exit from Ravonna’s office after switching devices immediately makes her suspicious.

Meanwhile, Loki’s time loop torture chamber was a lot of fun. The initial reveal of Lady Sif was surprising, and it was a fun cameo. I expected her appearance to explain where she had been all this time since she was last seen in Thor: The Dark World (not counting her Agents of SHIELD appearances), but she was merely a construct from Loki’s memories, meant to cause nothing but endless physical and emotional pain. 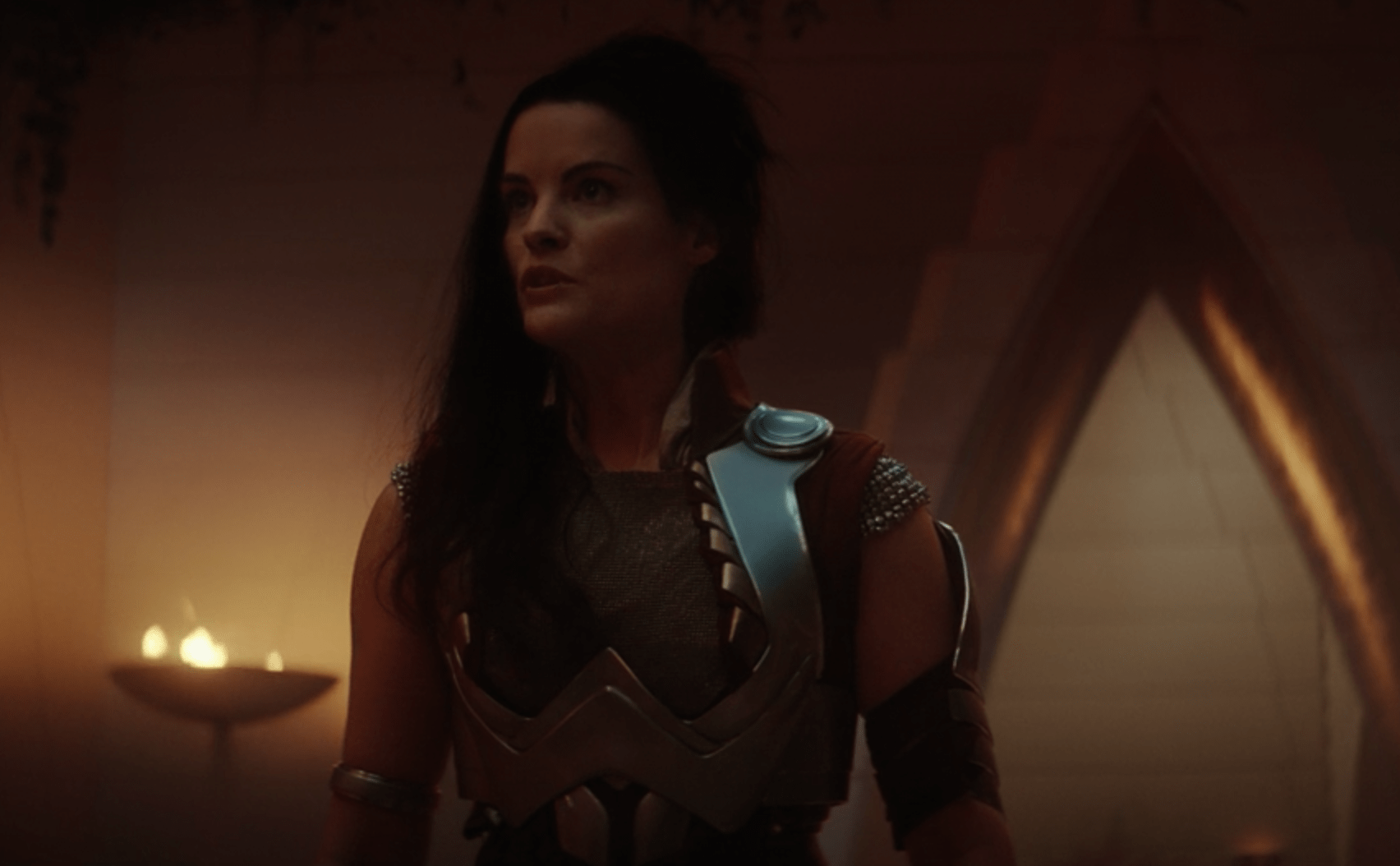 This is initially played for laughs, and I’m glad Tom Hiddleston didn’t ham up the slapstick quite as much as he could have. Though it was definitely amusing to see him get kneed in the crotch, plus his honest admission that he cut Sif’s hair because it was funny provided a genuine moment of brevity that felt fitting with his character. It eventually gave way to a moment of genuine emotion, as Loki reaches a dark place and admits that he is a narcissistic attention seeker. Lady Sif then twists the knife, tapping into his worst fears — that he will never be loved, which is of course what causes this behaviour.

This also leads to a great moment between him and Mobius, whose relationship jumps up a couple of notches too far this episode as well. Mobius begins the episode predictably furious that Loki ran off with Sylvie, believing that he had been working with her all along. When Loki tries to tell him that all TVA agents are variants, he understandably doesn’t believe him. Thankfully, enough doubts creep into his mind; his following conversation with Ravonna makes him incredibly suspicious, and he eventually believes the god of mischief after all. 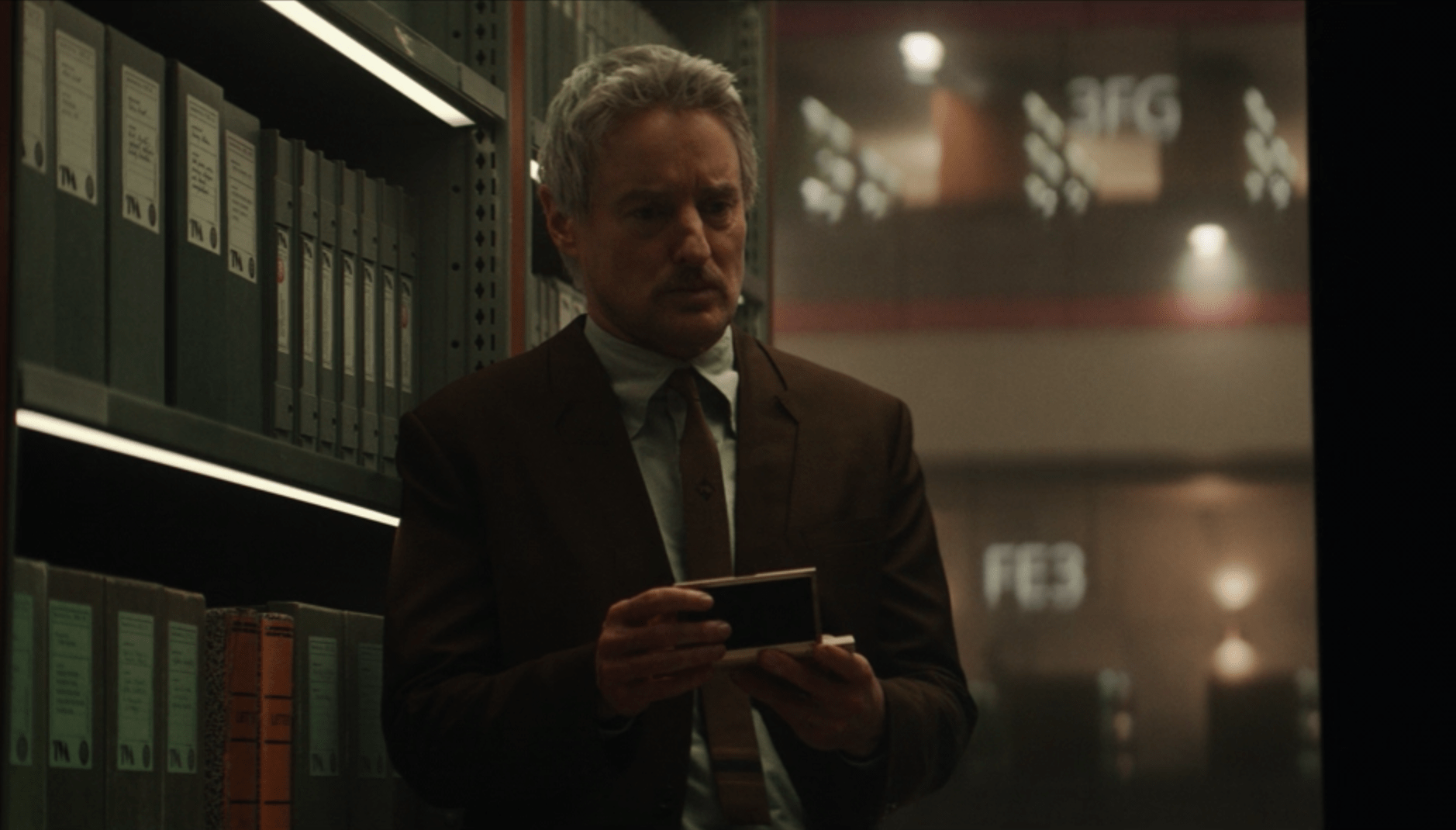 After a bit of detective work and discovering evidence that Ravonna is indeed lying to him, he finds Loki and bestows some kindness on him. He reassures him that he doesn’t deserve to be alone, and he can be anything he wants, even a good guy.

We already know this of course, but it’s nice that this Loki variant gets to hear it for himself. In his life, that’s probably the nicest thing anyone has ever said to him. It again feels a bit rushed when Loki calls Mobius a friend afterwards, but you can almost understand it in this context. 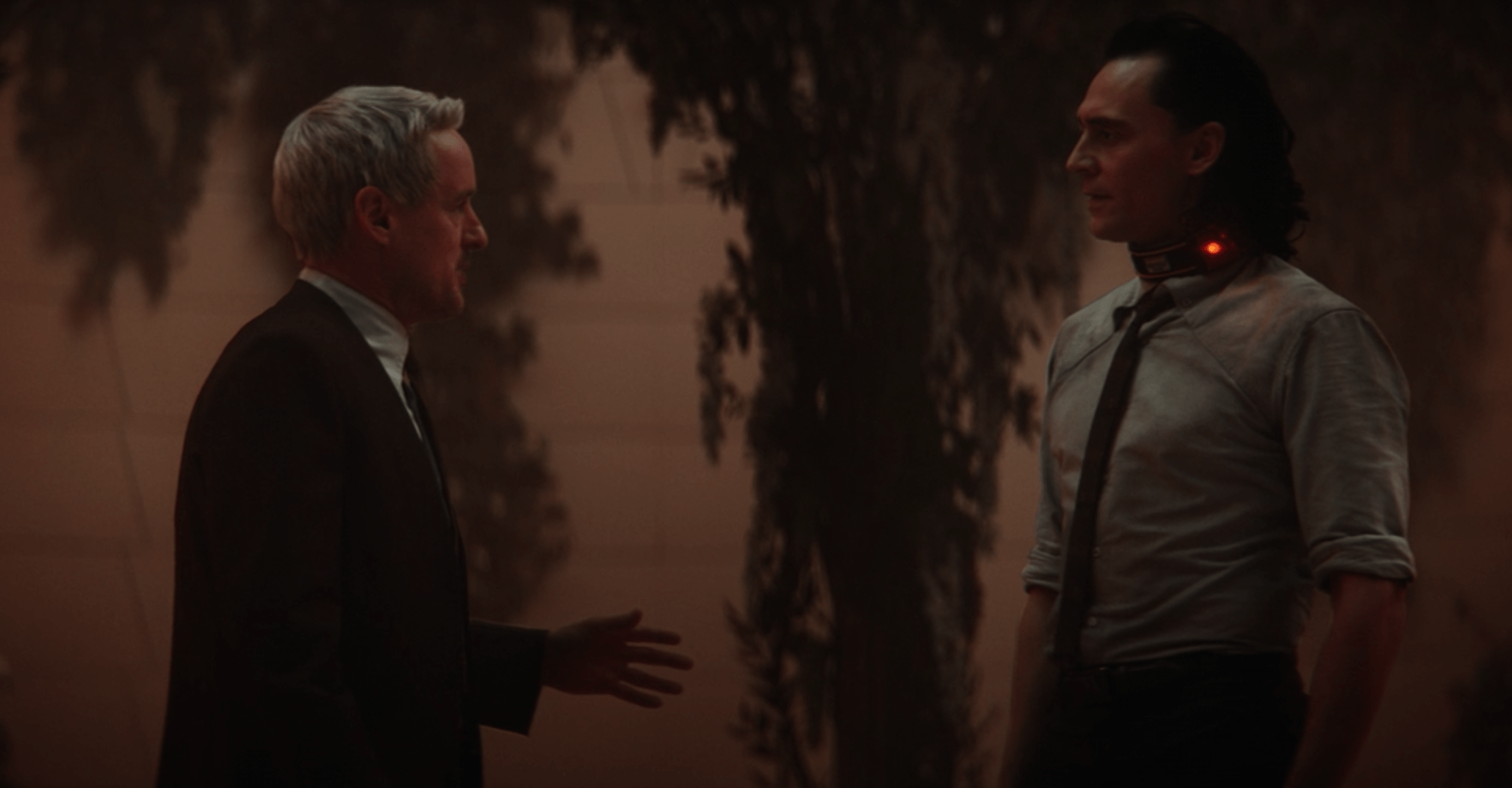 This all happens right before the two of them are confronted by Ravonna and a squad of TVA hunters. Owen Wilson knocks an inspirational speech out the park, and Mobius’ apparent disintegration is shocking at first — a death that feels right out of the Game of Thrones playbook for its unpredictability.

However, this show is not that brutal and, if anything, it showed its hand too soon. My mind had already started to race about what this meant and where Mobius might have gone if he wasn’t dead way before Loki’s disintegration at the end of the episode, which I’m sure wasn’t director Kate Herron’s intention. 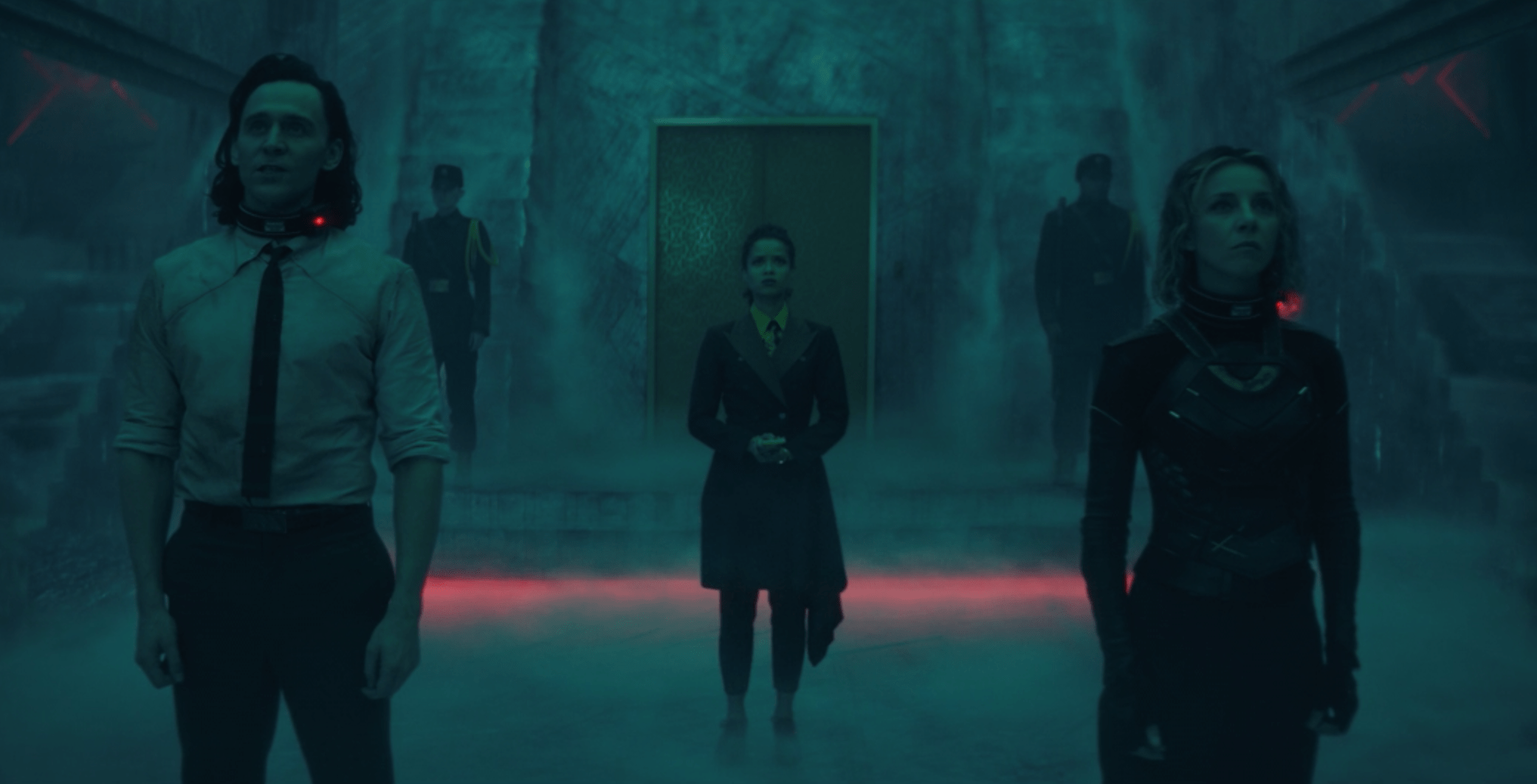 The big fight between Loki, Sylvie, Ravonna, and the hunters was exciting, worthy of a Marvel production. It ended in Loki’s disintegration, which was almost immediately robbed of any intended dramatic effect. Considering Tom Hiddleston still has two more episodes of his own show to star in, it all-but-confirmed he and Mobius did not die.

The pairing of Sylvie and Ravonna was enthralling, though it did once again fall into the familiar trope of pitting the two female characters against each other. At least this time it felt like a natural confrontation. It will be interesting to see Sylvie’s interrogation of Ravonna next week, where hopefully we’ll learn who is the power behind the Time Keepers once and for all.

Then, the episode gave us our first post-credits scene of the season, one episode earlier than WandaVision and The Falcon and The Winter Soldier. We saw Loki wake up in a post-apocalyptic New York City, immediately confirming our suspicions. It left us a tantalizing final shot of three other variant Lokis: a child Loki, a black Loki wielding an alternate version of Mjolnir, and an old Loki played by Richard E. Grant in full comic-accurate costume. Also: gator Loki because why not. It’s an absolutely bonkers note to end the episode on.

I should also mention Hunter B-15, who got her own redemptive moment after Sylvie’s enchantment in Roxxcart brought back her old memories. Her redemptive journey is in full swing after her tearful moment outside Roxxcart, and she got a great entrance before freeing Loki and Sylvie from their constraints. It will be interesting to see what role she plays in the rest of the series, starting with Ravonna’s interrogation next week.

It seems that the next episode of Loki is going to get even weirder, and I can’t wait to see Tom Hiddleston interact with more variants as we learn more about what happens to everyone “disintegrated” by the TVA. The Nexus Event kicked the series back into gear following a surprisingly low stakes interlude last week, and I can’t wait to see what episode five has in store.