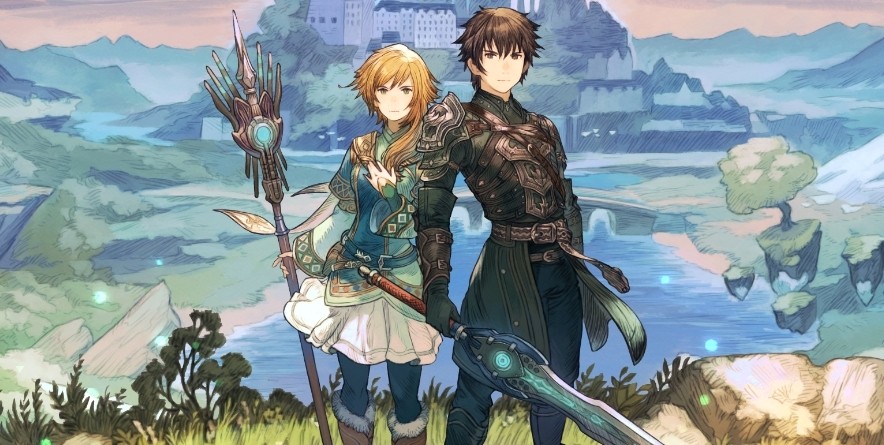 While die-hard fans of JRPGs wait for the next mainline Final Fantasy and Dragon Quest installments, Midgar Studio aims to make a splash with Edge of Eternity.

I’ve never been a big fan of JRPGs. I believe they tend to overstay its welcome with meaningless battles and repetitive grinds that extend the duration of games which would otherwise move at a reasonable pace. While western RPGs typically offer several options to progress and flexible structures which accommodate different playstyles, JPRGs are designed most of the time to be played in a certain, strict way (even though they can be broken too); levels, stats, and other systems are just numbers that must be boosted up in order to get over a progression wall. Their success normally depends on the quality of their dense worlds and the characters that players spend tens of hours with. Of course, some Japanese developers have tried to break the mold and expand in new directions, something which I applaud. However, the gap between Western and Eastern RPG players appears to be bigger with every passing year.

France-based team Midgar Studio (you can quickly tell they grew up on Final Fantasy) aimed to recover some of the arguably lost magic of the JPRGs many of us were exposed to in the 90s. Back then, epic but whimsical fantasy adventures were the way to go with these games. As gamers grew up, so did the genre, which nowadays mostly caters to teenagers and adults who are into anime and/or “mature” fantasy. In recent years, we’ve seen some valiant efforts to go back (at least tonally) to those simpler stories, but they feel like a niche at this point. On the other hand, gameplay is all over the place, with some devs going back to static turn-based systems and others trying to shake things up with hybrid turns or action-RPG battles. Midgar Studio wanted Edge of Eternity to feel classic yet a bit more engrossing with a combat system that marries together traditional turns and tile-based tactics.

I should mention that the only turn-based RPG systems which I genuinely enjoy at this stage are the ones that are strategic and require you to move characters around and take advantage of the scenery. That’s why I was interested in what Edge of Eternity was bringing to the table. Pokémon can still get away with traditional turns due to its inherent charm, but I’m also hoping for a substantial gameplay upgrade for the mainline series soon. 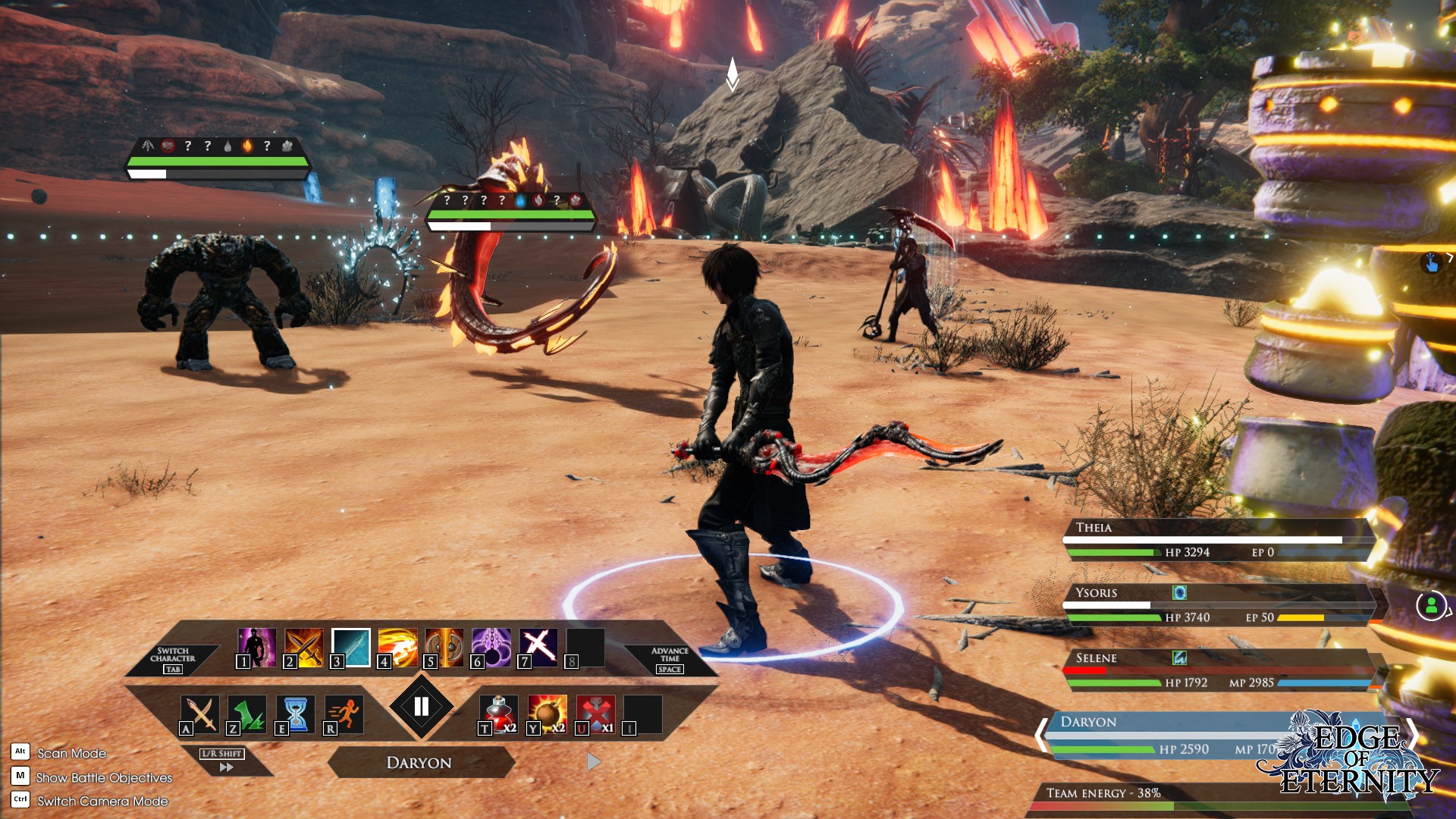 On the surface, Edge of Eternity looks like a modern-ish Final Fantasy game, and it certainly behaves like one when you’re out of combat (more on that later). During battles, turns are the game’s backbone, but the order in which actions are executed changes constantly due to “progress bars” that dictate how long it takes for each character to be ready to do something; this also applies to enemies, and some of them can even boost the bars’ speed — this makes some situations quickly go from “everything’s under control here” to “oh, they’ve wiped half of this guy’s HP between two of his actions.” Tread carefully and play with your positioning. Actions cost either nothing or MP, which can be regained in traditional RPG fashion with potions and some abilities.

Beyond the usual RPG fare, the tactical element is meager, but cannot be overlooked, as some enemies are basically unbeatable if you don’t move around their advanced moves, which affect specific tiles. Make no mistake though; this ain’t XCOM, and these mechanics are just another thin layer on top of a largely accessible JPRG. For the most part, battles will take place in spaces which don’t have a geography that you can actively play with. That being said, crystals (it’s not a true JPRG if there aren’t magic gems) and siege weapons offer additional tactical possibilities that might be key to defeating tougher opponents.

The leveling up system is straightforward too, and applies to both characters and weapons. This linear progression opens slots in which you can put crystals of varying rarities — they can be crafted and improved as well, like regular equipment and materials. There aren’t massive amounts of weapons, pieces of clothing/armor, or abilities to be found here. Instead, most of what you obtain is either useful or good for crafting. While in the game’s lush and highly-detailed open-world, you’re free to look in every nook and cranny for loot, which is often linked to secondary fetch quests, a genre-wide issue that Edge of Eternity is sadly unable to avoid. More surprising are some tile-based puzzles that feel refreshing and are peppered throughout the maps. 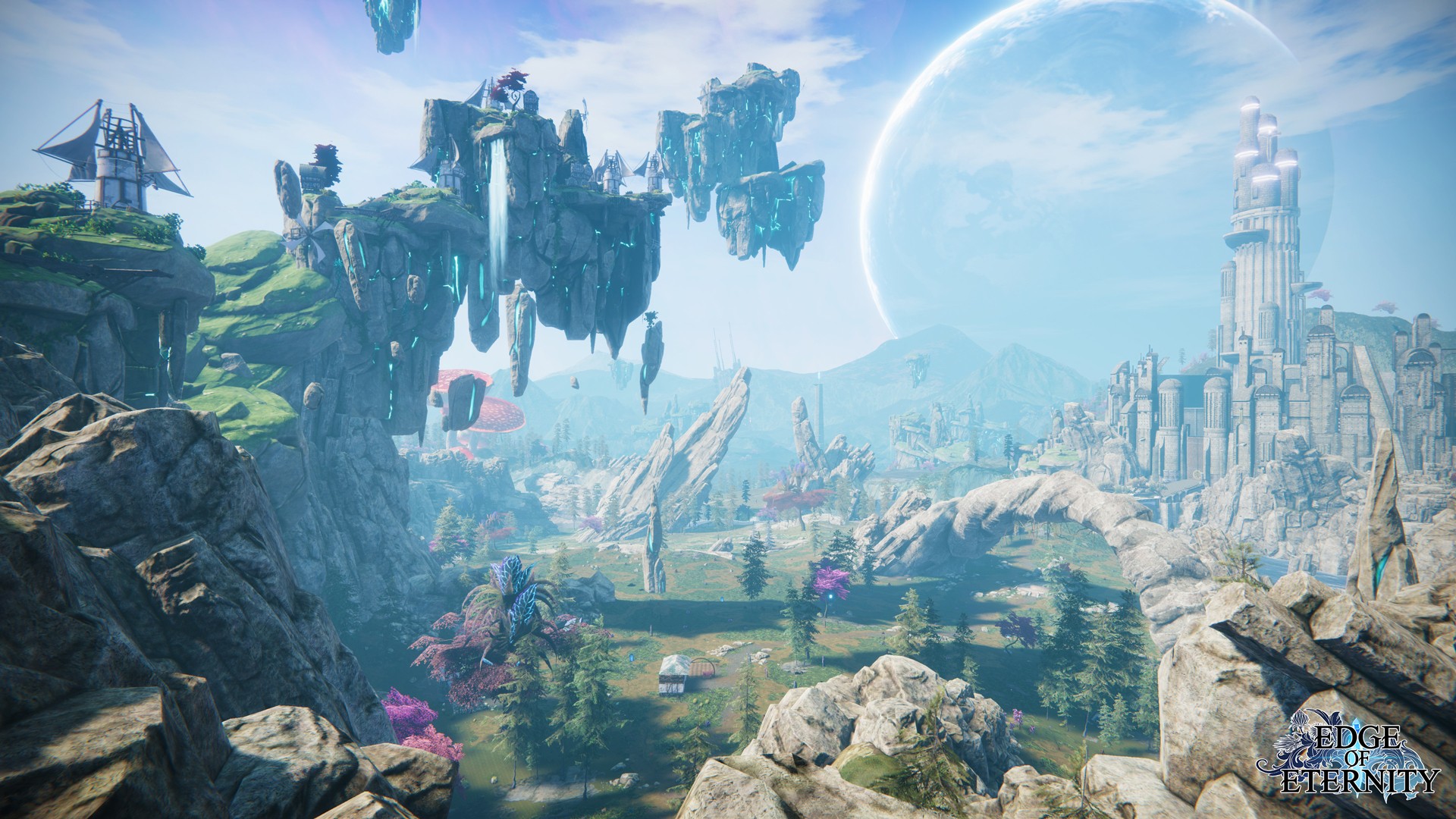 As I mentioned before, Midgar Studio chose to tell a story which is easy to follow and doesn’t throw copious amounts of exposition at the player; JRPGs often make their narrative overly complicated and twisty without any real gains, and spend the first few hours flooding the screen with walls of text and monologues. Thankfully, this doesn’t apply to all modern JPRGs, and Edge of Eternity goes back to its nostalgic roots — two siblings, Daryon and Selene, set out on a journey to cure the Corrosion, an alien infection that threatens both their mother and the world of Heryon as a whole. The premise is simple, and the game doesn’t like to meander around despite some well-executed twists and sidetracking; without getting into details, it’s also an explicitly sci-fi fantasy epic that mixes some really interesting concepts and raises the stakes at a steady pace. I’ve been really impressed by how well-defined the main characters are, too. Again, the lack of sluggish, cringy monologues is welcome, but the chemistry between Daryon and Selene — a troubled warrior and an optimistic priestess — consistently energizes the plot. This also extends to the roster of secondary characters, which also exemplifies the “quality over quantity” approach to the game’s storytelling.

Perhaps the most impressive thing about Edge of Eternity is how good it looks 90% of the time and how vast it is. Needless to say, it’s still a JRPG and not an expansive western open-world RPG such as Skyrim. In spite of this, what Midgar Studio’s small team accomplished here is amazing — the world is exuberant and filled with little details, and the (densely crowded) cities, while static and old-fashioned, are full of personality and liveliness. I can only imagine how much time these good folks needed to work on so many assets and intricate maps with their limited resources. The downside is that the characters’ faces look “samey” and a bit too rigid most of the time, and many of the animations are janky at best; you can tell the project was maybe a bit too big for such a small studio. 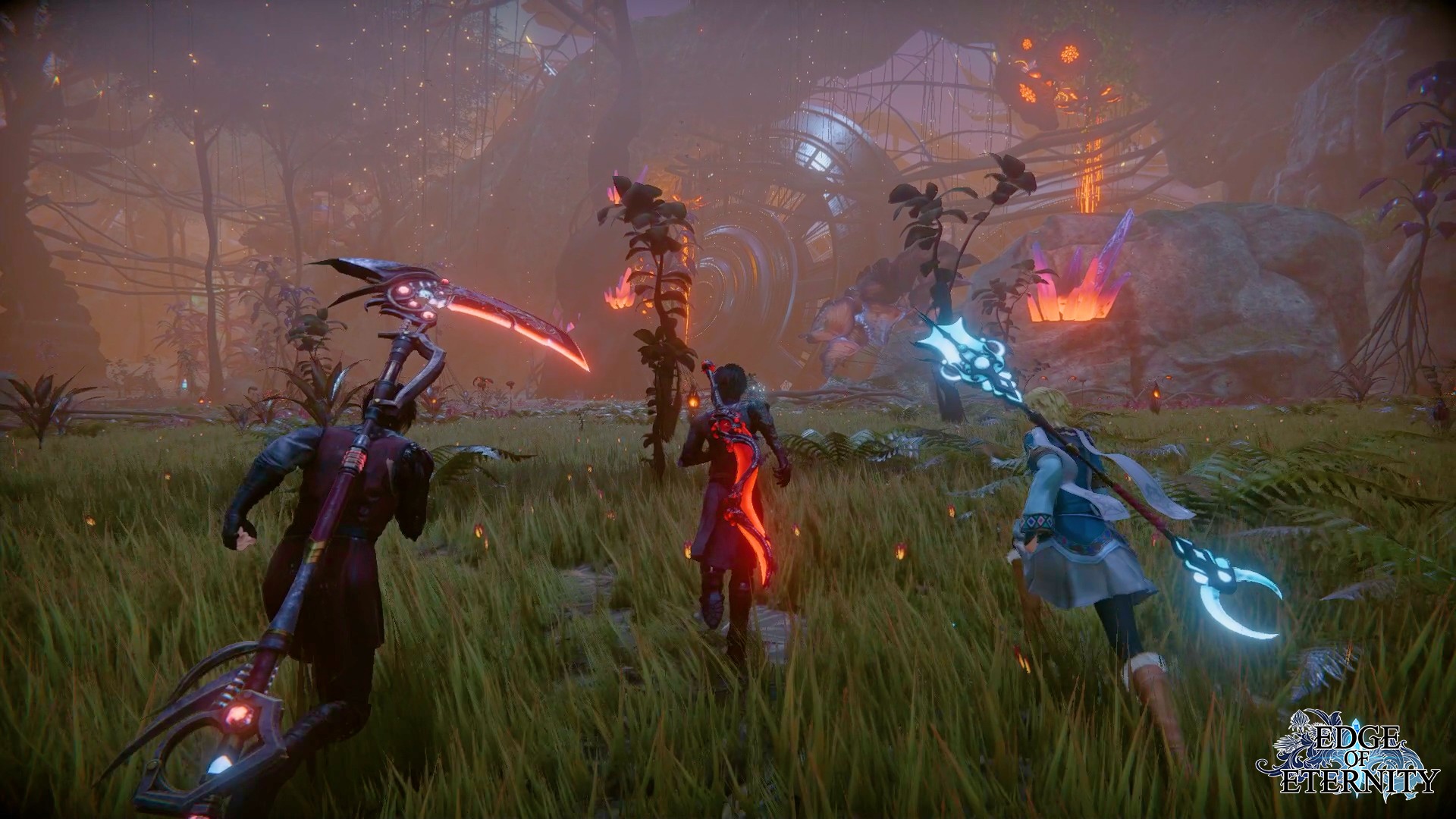 The original soundtrack is expectedly nothing short of excellent, as it was composed and conducted by JRPG veteran Yasunori Mitsuda (Xenogears, Chrono Trigger) alongside newcomer Cédric Menendez. It feels classical yet grand and modern, and clearly conveys where Midgar Studio’s heart was when they decided to make this game. Surprisingly, the voice acting is quite good as well, and covers way more dialogue than some triple-A classic JPRGs (unimportant interactions are text-only almost always).

Edge of Eternity has spent a lot of time in early access, and this full release feels solid enough. Some noticeable bugs and imperfections remain, and the performance could be much better, but it’s launched in a better state than many recent big-name titles. I get the impression that Midgar Studio knew exactly who they were making the game for every step of the way. I personally would have liked a braver take on the genre gameplay-wise, and I don’t know whether I’ll stick around for too long, but JPRG die-hards will surely have lots of fun with this. While the “eurojank” feeling is strong with this one, and the devs often bit more than they could chew, its charm and determination cannot be overlooked. Also: big rideable cat-things and chonky chicks!

Edge of Eternity is now available on Steam, Epic, and GOG for $29.99. It will supposedly hit unspecified consoles later this year (Q4 2021).