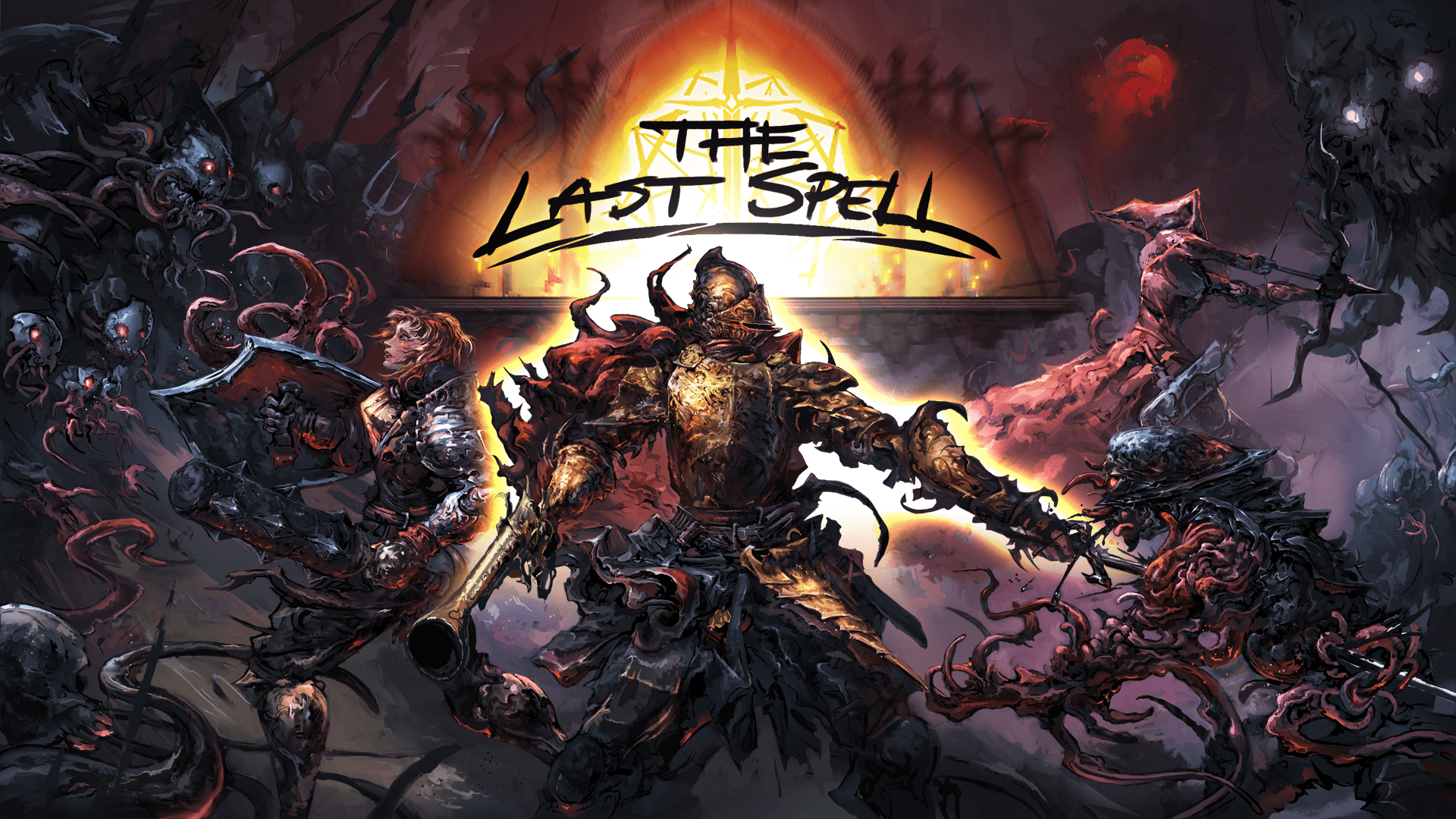 The Last Spell hit early access on Steam yesterday. Here are my thoughts after nine hours of abomination-slaying and losing all hope.

Dark fantasy is hotter than ever right now. After Dark Souls took the world by storm in 2011 and unintentionally created one of the richest modern action-RPG subgenres, lots of studios, both big and small, rushed to work on games which embraced a more somber take on fantastic worlds and characters. Almost ten years later, we are still playing titles that double down on grimdark settings filled with magic and horror.

The Last Spell aims to bring some of that sensibility into the tactical RPG genre; much of its striking in-game aesthetic harkens back to 2014’s Hero Siege, which also pitted a group of heroes against evil hordes, but was played in real-time, and DNA from Darkest Dungeon, a massively successful turn-based, hard-as-nails dungeon crawler, is all over the place. The folks at French studio Ishtar Games kept these influences close to their chests, and I’m inclined to say things have worked out for them.

After decades of war, and in a desperate move to end it all, the mages provoked the Cataclysm: “massive balls of pure magic obliterated nearly everything.” Shortly afterwards, a strange mist covered the world, turning everyone into monsters and other creatures of the dark. Now only a few havens keep up the fight against the hordes of bloodthirsty monsters that come out at night. A few strained heroes protect the walls night after night, until a handful of mages are able to cast “The Last Spell” and fix their mistake by banishing all magic from the world and (hopefully) saving those who remain untouched by the Mist. 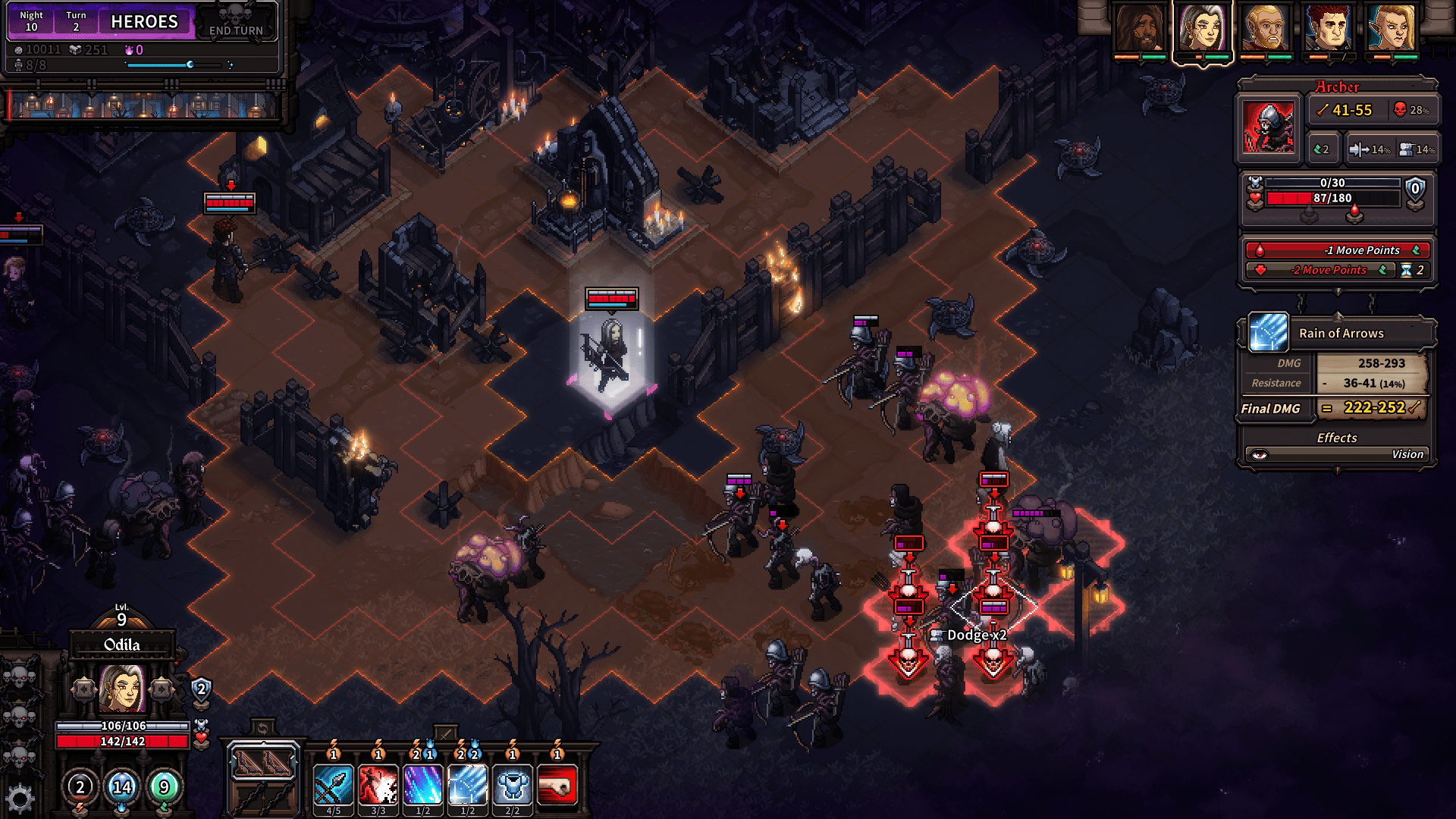 As you can see in the screenshot above, the game utilizes an isometric view which defines its tile-based tactical combat. It largely feels like Darkest Dungeon meets XCOM, except the enemies are coming for the heroes, who only need to hold them back night after night. During the day, the crumbling town can be upgraded, repaired, and prepared for the next onslaught. Like many titles with roguelike elements, the management aspect is a balancing act that asks players to make some tough choices; specializing and going for certain “builds” works better in the long run than trying to do and build everything at once. This also applies to the heroes themselves, who level up in traditional RPG fashion, gain new perks, and can be customized with new, more powerful items.

Two main currencies are used in the game: gold and building materials. They can be salvaged from the ruins in the map, making room for new and useful buildings in the process, but they are also awarded in varying amounts depending on your level of success defending the haven each night. While having solid defenses (which can and will be destroyed) quickly becomes key to survival, gold does a lot in this game; it allows you to buy new equipment and trinkets, construct new buildings, and upgrade existing ones. Without getting into details, I strongly recommend choosing very carefully where you put your hard-earned money. 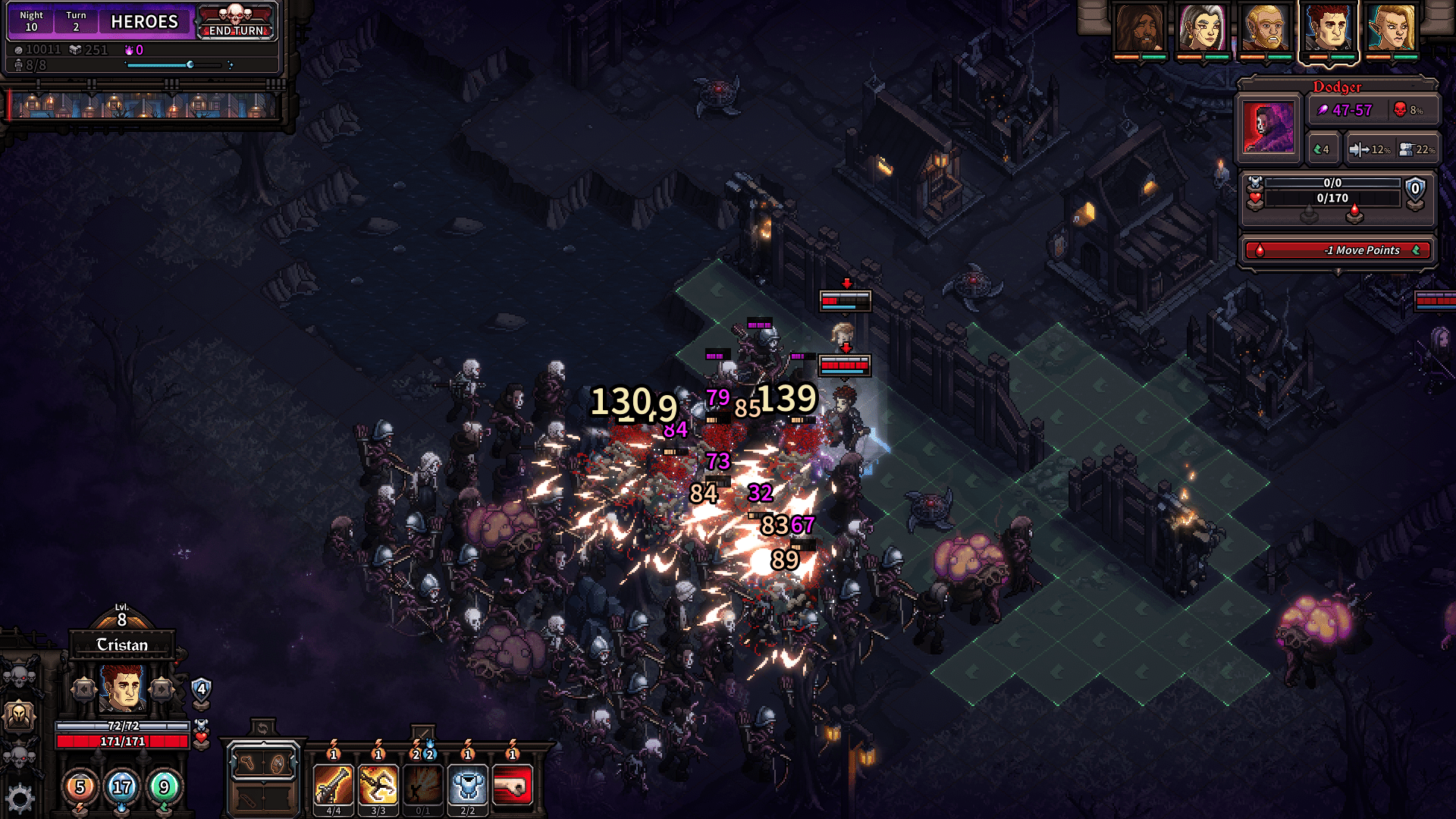 The combat itself, which takes place after the management and preparation phases, is quite straightforward, although that doesn’t make it any less strategic. Heroes, who are randomly generated in each run and stick to classic fantasy archetypes, can move through a number of tiles every turn, but combat-related actions don’t cost movement points. Instead, combat utilizes action points and/or mana. Action and movement points regenerate with each new turn, but mana doesn’t, so abilities that consume mana need to be used thoughtfully. Mana can be restored with potions during the combat phase, or with mana wells (a type of building) and other effects during the subsequent management phase… if you survive.

Abilities and attacks work in conjunction with the usual “rolls” common to any and every RPG. Stats can be improved through character progression and items (plus buffs and debuffs). You know, the usual stuff. When you target enemies, you can easily see who and what (buildings can be damaged) will be affected by the chosen actions, so give them some thought in order to obliterate the seemingly endless horde and break the undead.

Of course, The Last Spell eventually throws more enemies at you than you can handle, and the first few runs are doomed to fail miserably. The game’s tacit narrative works around this and makes good use of your failures to propel the (thin) plot forward; the first time the haven falls, you meet two mysterious and ethereal god-like entities that want to help you across different iterations of the same events. Basically, this is the “meta” portion of the game, where a couple of permanent progression systems keep track of your advances and reward you with upgrades that stick around forever, making each run easier than the last. In due course, one of the many realities where this calamity has taken place will succeed… or at least that’s the plan. As I mentioned before when analyzing titles with roguelike elements, a sense of constant and permanent progression is a must for these games, especially if they’re not arcadey. Fear not, your time is never wasted in The Last Spell. 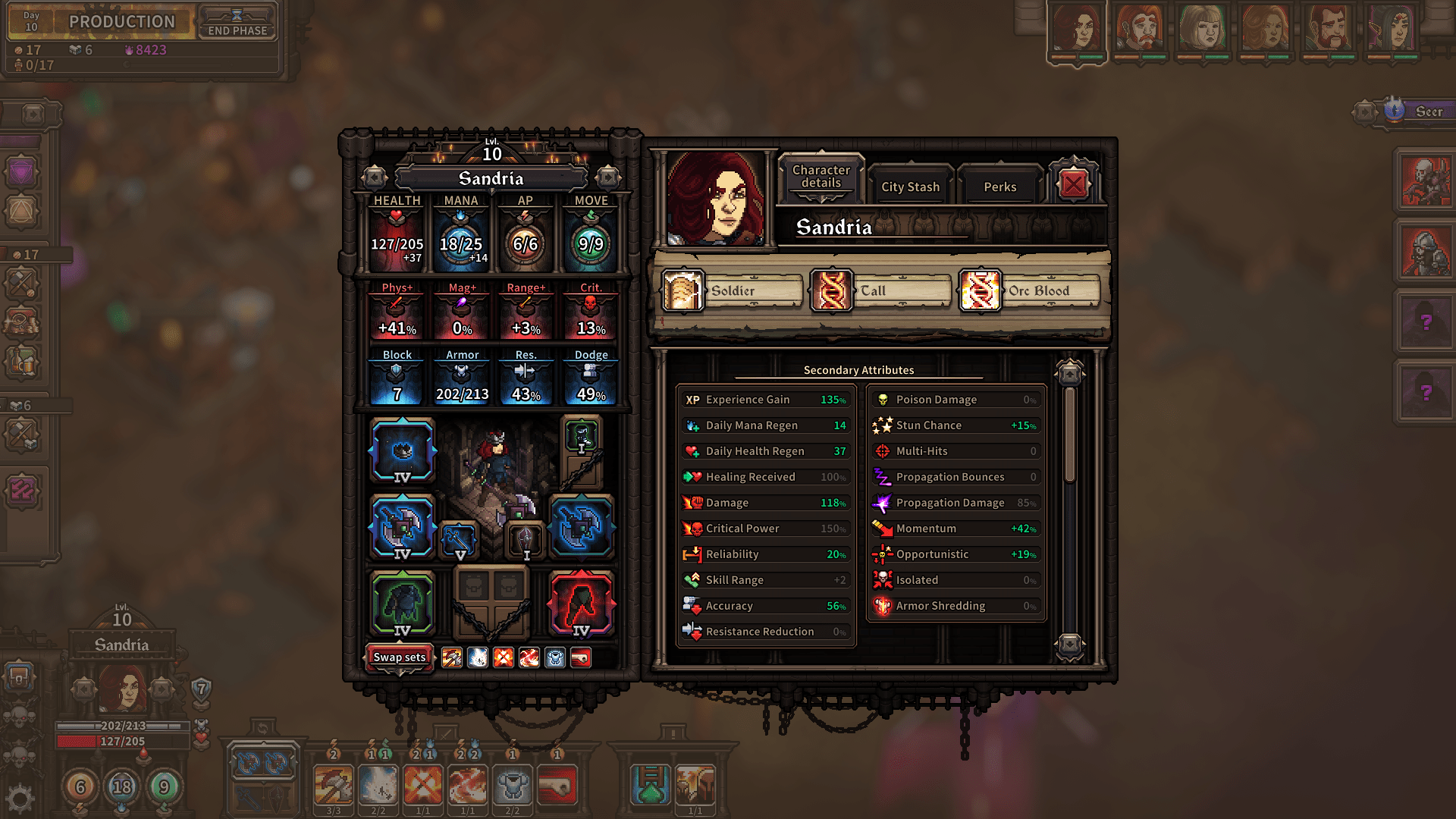 Without a doubt, Ishtar Games’ little project packs the metalest, most hardcore soundtrack I’ve heard since last year’s DOOM Eternal. Sometimes the music by The Algorithm might be a bit too much for a turn-based game, but it consistently makes The Last Spell feel like a nail-biting last stand against a dark army of immense power. Most of the sound effects are quite punchy and give the game an extra edge, too. Still, there’s room for improvement here, and I’m sure the audio will evolve throughout the early access period.

The pixel art is mostly great as well; enemy types can be easily differentiated, and the game has a distinct visual personality. However, I believe the human characters could use a little “glowup,” as they’re not nearly as good as the rest of the visuals. Specifically, the portraits feel like they belong to another, more amateurish title. Again, feed the devs enough feedback and things are likely to change. They claim to be very much open to suggestions of all kinds, and the studio has a fair amount of experience by now.

As it stands, The Last Spell is big and polished enough to give it a sincere recommendation. It also feels sufficiently “complete,” as we can make it to the eleventh night, defeat the current big boss, and step into additional runs with modifiers. The amount of unlockable content is sizeable too. That being said, this is only the beginning, as explained by a rather lengthy pre-release blog post by the Ishtar team. Conversely, the CPU performance, while not bad, is a bit iffy for such a discreet game, putting more strain on my system than many modern triple-A 3D games, so let’s hope they don’t forget about optimization in the coming months.

The Last Spell is now available on Steam with a launch -10% discount off its $19.99 price.

Thanks to The Arcade Crew (publisher) and Tinsley PR for the review code.