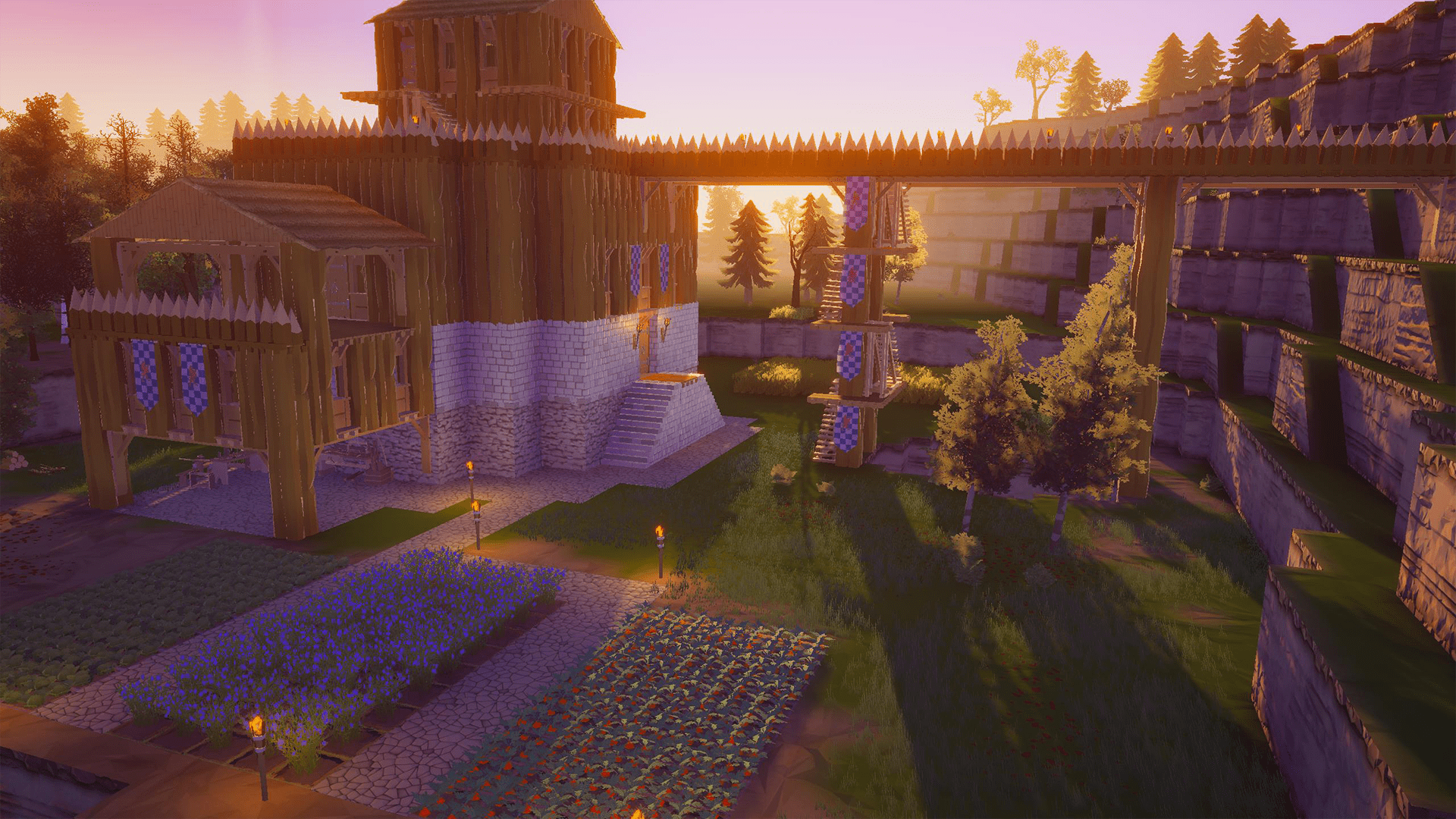 Go from homeless peasant to feudal landlord (and more) in Going Medieval.

I love management sims. They are my favorite “comfort games.” From classics such as Zoo Tycoon to modern entries like Two Point Hospital, these games always manage (pun intended) to make me ask for five more minutes. You can set your own pace, but they are invariably engrossing and ripe with opportunities for user-generated creativity.

Medieval management sims have regularly been quite famous too: the Stronghold series keeps marching forward 20 years after its first entry made a splash, and recent indie offerings such as Banished or Kingdoms and Castles have put their own spin on the subgenre. Now comes Going Medieval from Serbian up-and-coming studio Foxy Voxel, and it’s shaping up to be really impressive.

I have spent some hours with the early access build of Going Medieval, which arrives as soon as today, and I ended up roleplaying a seemingly peaceful and harmless forest village inhabited by cannibals. Many bandits, slavers, and other despicable folk tried to take over my small portion of land, but they all ended up filling my villagers’ bellies. I must admit this creative choice wasn’t the best for the denizens’ mental health, but it paid off in the long run. 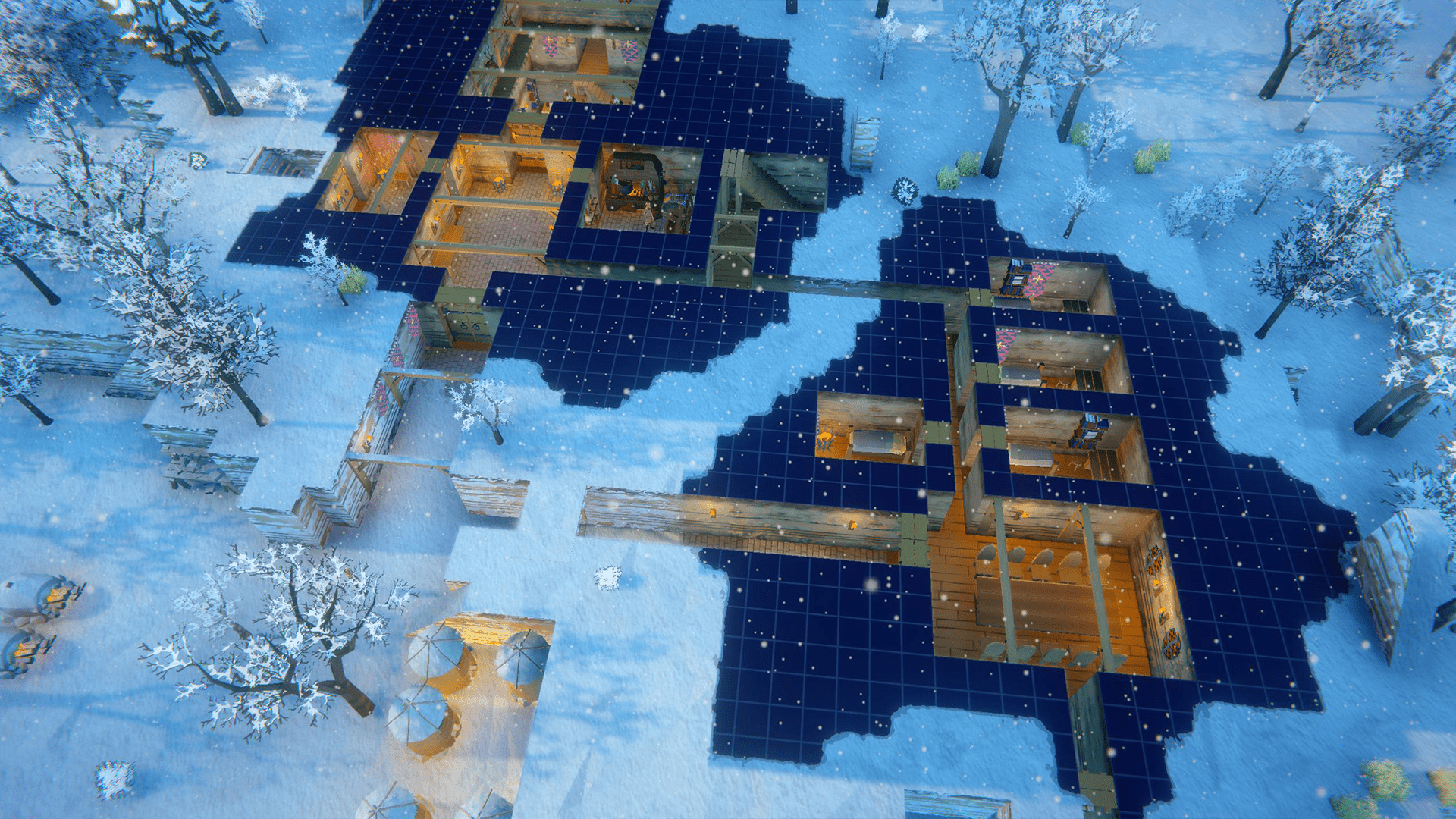 The game looks blocky because it’s all about voxels, like the studio’s name suggests. When you think about voxel-based games, you think of Minecraft and a seemingly endless list of clones, but some strategy titles have also adopted them in order to build highly-modifiable, procedural worlds. In Going Medieval, you can constantly feel the influence of Minecraft, starting with a world generation menu that asks you to select a biome and allows to toy with various parameters and even copy “world seeds” which, much like in Mojang’s game, can be shared with other players.

Building stuff and “breaking” the environment also works with grids and coordinates, so you can create a small empire from scratch in orderly fashion. More than welcome (and not present in many other sims) is the ability to build on different heights, not only allowing you to make buildings taller, but also opening up many dwarf-like possibilities for your dwellings; the game even encourages you to go underground, at least with your stockpiles, during the summer season.

Going Medieval transports players to the year 1346; the world is beginning to recover from the calamity known as Black Death, and many survivors are starting to migrate and re-settle on areas reclaimed by nature. These survivors are procedurally generated too, and each one has their own names, stats, strengths, and weaknesses. They also can level up their different skills through labor, so progression is always happening. As your settlement grows bigger, new friendly faces (and enemies) will come your way. Thankfully, if you just want to chill and enjoy building up a stronghold, you can always select the Peaceful mode at the start of a new game. Likewise, Survival is also a thing and offers regular, increasingly difficult sieges. Foxy Voxel clearly wants its first game to be as flexible as possible and to accommodate different playstyles. 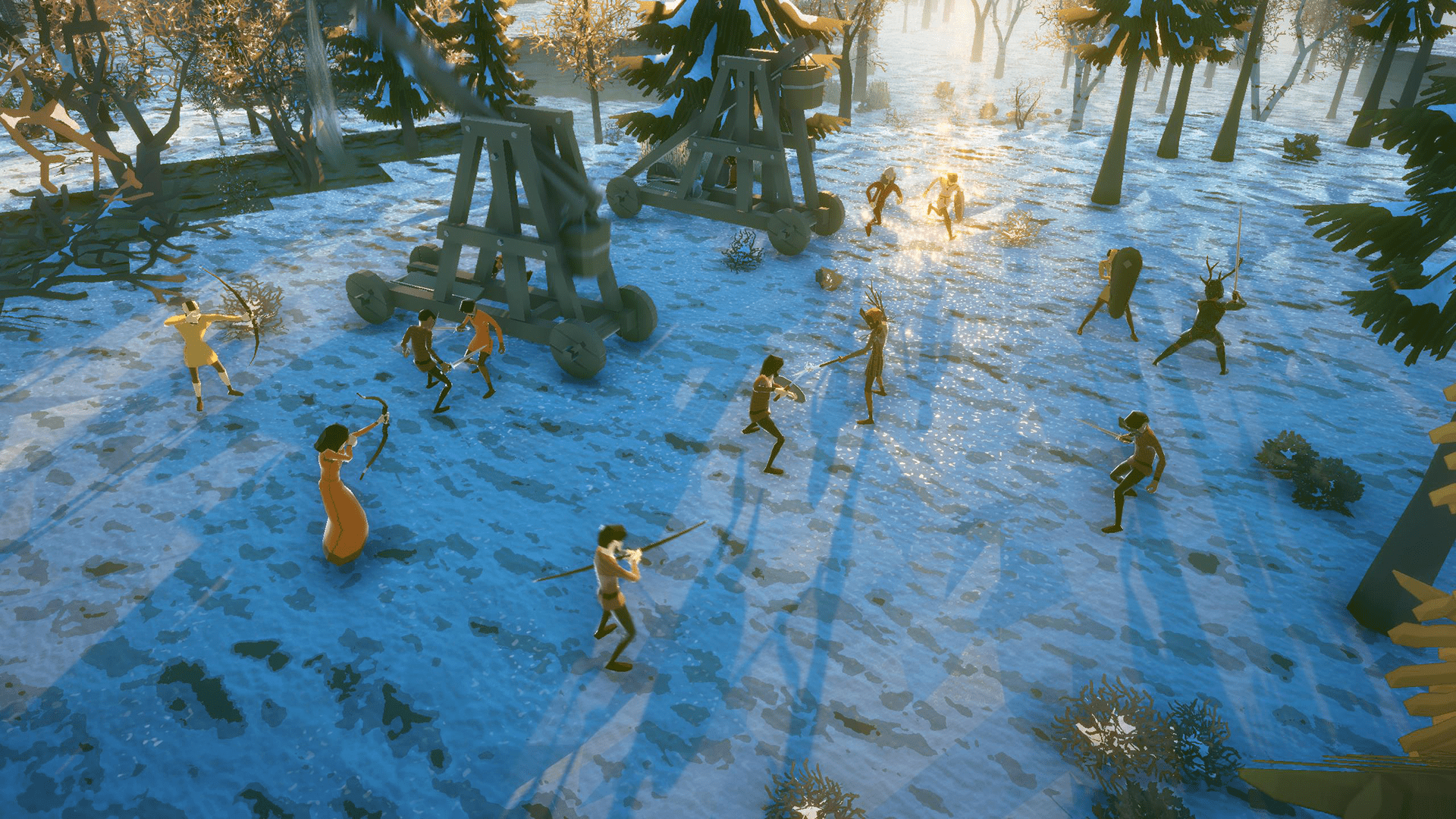 Controlling the characters might seem daunting at first, as the game isn’t the best at telling the player how to effectively make sense of all the options, menus, and actions that are available from the get-go. This game does a lot, but it’s only as difficult as you want it to be. Individual actions can be executed, and priorities (or limits) can be set for all the activities, but the villagers work on their own and simply need you to give them stuff to do. By selecting an action (chopping wood, collecting edibles, mining…) and setting areas, they will automatically take care of things until all is done. If they don’t have anything better to do, they will pick up and organize stuff which is lying around, or cook, write, etc. Lots of micromanaging can be done (adjusting schedules, setting weapon/armor/clothing preferences, and much more), but you mainly have to take care of the bigger picture and keep them busy.

All these processes quickly generate lots of materials and loot, and I mean lots of them. Keeping an eye on stockpiles and expanding their space is essential, as many game systems aren’t in place yet (the game is just starting its early access run), and objects like books, which hold knowledge and are needed to research new stuff, take up a lot of space. Most items also degrade over time, so you want to keep stockpiles under a roof (or underground); this is especially bothersome regarding those damned books, as they eventually fall apart and require you to re-obtain lost “research points” before gaining the new ones needed to obtain new technologies. We need non-decorative bookshelves as soon as possible, please!

Past the first 30 minutes or so, you’ll probably have a solid general idea of how the game works. From that point onwards, it all feels like smooth sailing and simply adapting to new situations (weather conditions, increasingly difficult enemies…). I strongly encourage everyone to read as much as possible, especially when it comes to materials; as stated before, much of the game’s intricacies are buried and not clearly explained to the player, and it’s bound to get more complex as time passes. Hopefully, the tutorial system will get updates as well.

Combat is being kept simple for now: you’re warned about the enemies’ proximity (usually a couple of days at most), then they arrive, and so you’re given some time to prepare, set up traps (if you hadn’t already), and gather your troops. Villagers can be either rallied to battle, which allows you to control them and set specific targets, or left to do their own thing, as you can permanently set their stance during raids to flee/neutral/aggressive. It’s heavily recommended to take over the situation and have them focus on one enemy at a time, at least during the early stages of the game, when they’re not very good fighters; this allowed me to minimize losses and completely wreck the invaders more often than not. Once the fighting has ended, it’s time to loot and bury (or eat) the dead. Fun medieval times! 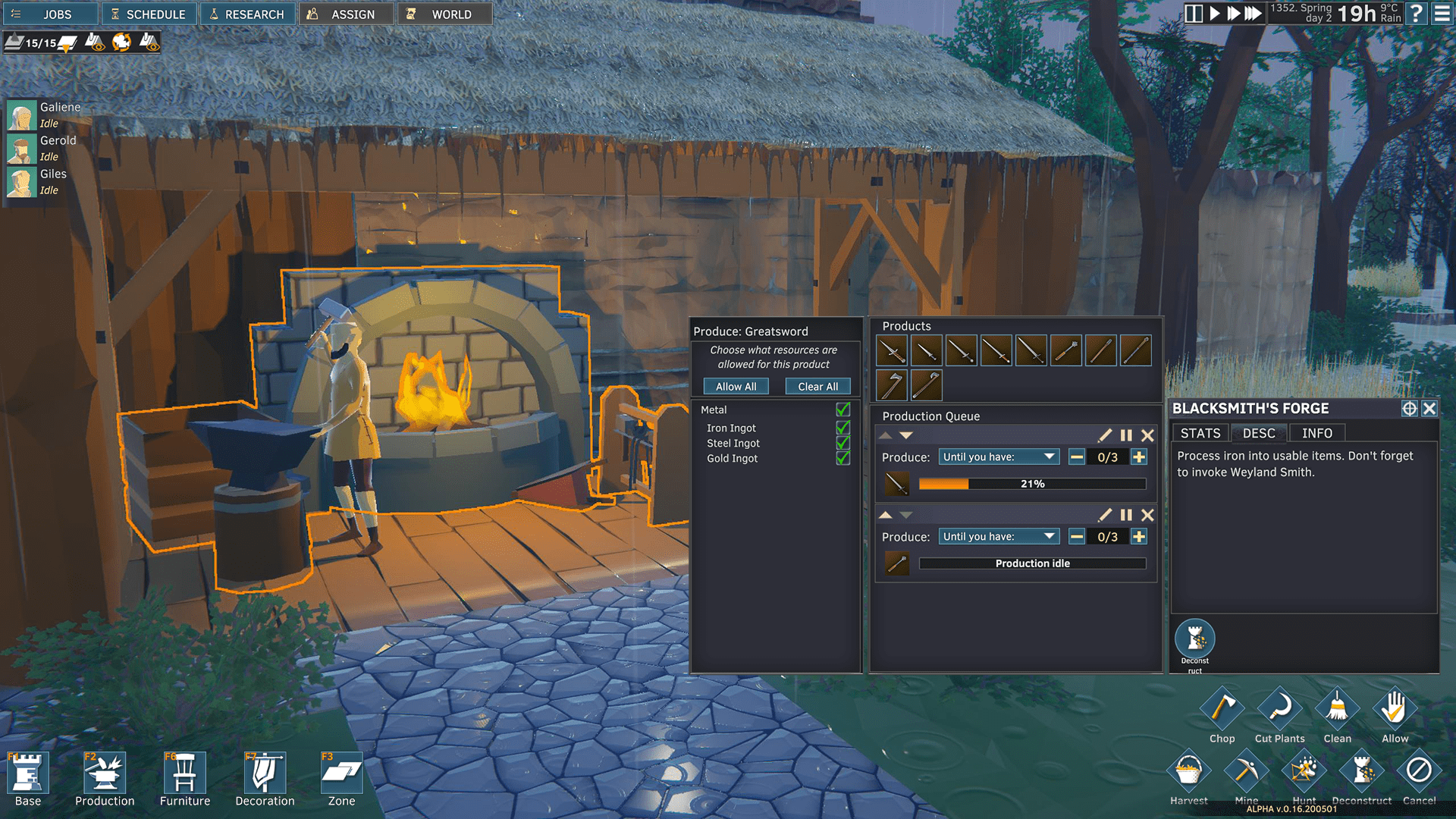 In many ways, Going Medieval already feels more fleshed out than many full releases, with stuff like item crafting and the building systems working perfectly fine and offering plenty of options. You can tell the betas that preceded this early access release served their purpose. The game is quite stable too, and performance is solid so far, plus I only encountered a couple of visual glitches, and they were mostly related to menus. However, the lack of water systems (villagers only drink wine or beer) or proper storage for items as crucial as books/chronicles left me scratching my head. For a game as complex and ambitious as this one, you’d think that stuff would have been locked before going public. Still, it doesn’t bring down what is otherwise a tremendously promising entry into the medieval sim subgenre. In fact, I think it could be one of the best around if the team at Foxy Voxel hits its goals consistently, and their roadmap looks very promising: 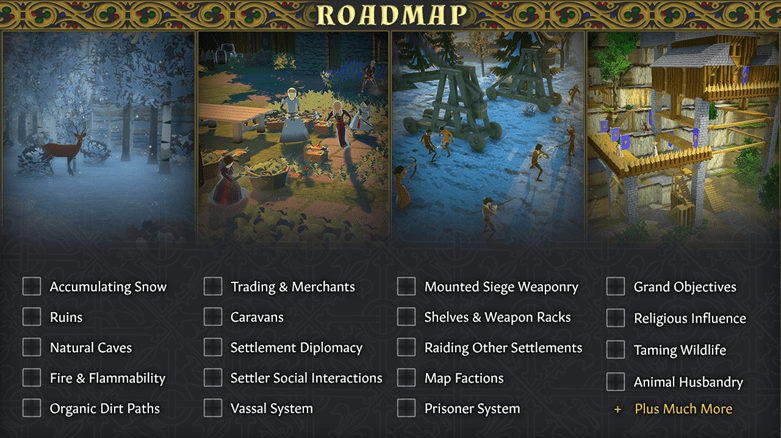 As it stands, Going Medieval is an easy recommend for anyone who’s into management games with comfy vibes. It might feel a little aimless right now, since most of the out-of-town interactions and systems will arrive later, but it’s one hell of a town builder game with a strong visual style and plenty of room for creativity. The devs are listening closely to the community’s feedback and demands, both in the game’s Steam forums and its Discord server, so this already feels like early access done right. I’ll stick around for sure, forcing my dwellers to consume their enemies’ flesh and trying to figure out impossible stone towers while waiting for those juicy content updates.

Going Medieval is now available with a launch -10% discount off its $22.49 price on Steam, Epic, and GOG.

Thanks to The Irregular Corporation (publisher) and Tinsley PR for the review code.