Nameless XIII’s first game Ashwalkers has arrived, and I’ve had the chance to play through it.

Interactive story games have always been a thing. Originally, they resembled “choose your own adventure” books and asked players to fill gaps with their imagination. Later, they became more elaborate and allowed for a number of approaches that ranged from interactive animated movies (Dragon’s Lair) to text-based adventures that focused on management and random events (The Oregon Trail). Of course, technological advancements made more complex interactive stories possible, and the line between “regular” and “story-heavy” video games became blurrier than ever. Nowadays, when we talk about “narrative video games,” we’re likely dealing with works that push aside skill-based gameplay and don’t require a lot of effort to get through.

The concept of “branching narrative” is these games’ key strength; replayability is nurtured by non-linear scripts and the possibility of reaching different conclusions. Plenty of games “with actual gameplay” also feature these structures, but titles such as Telltale’s The Walking Dead or Dontnod’s Life Is Strange clearly brought a lot of attention to these simpler, more relaxed offerings.

Ashwalkers comes from Nameless XIII, a studio led by Hervé Bonin, one of the fathers of Dontnod. This surely will work wonders for the game’s marketing, but does it actually live up to those expectations? I don’t think so. 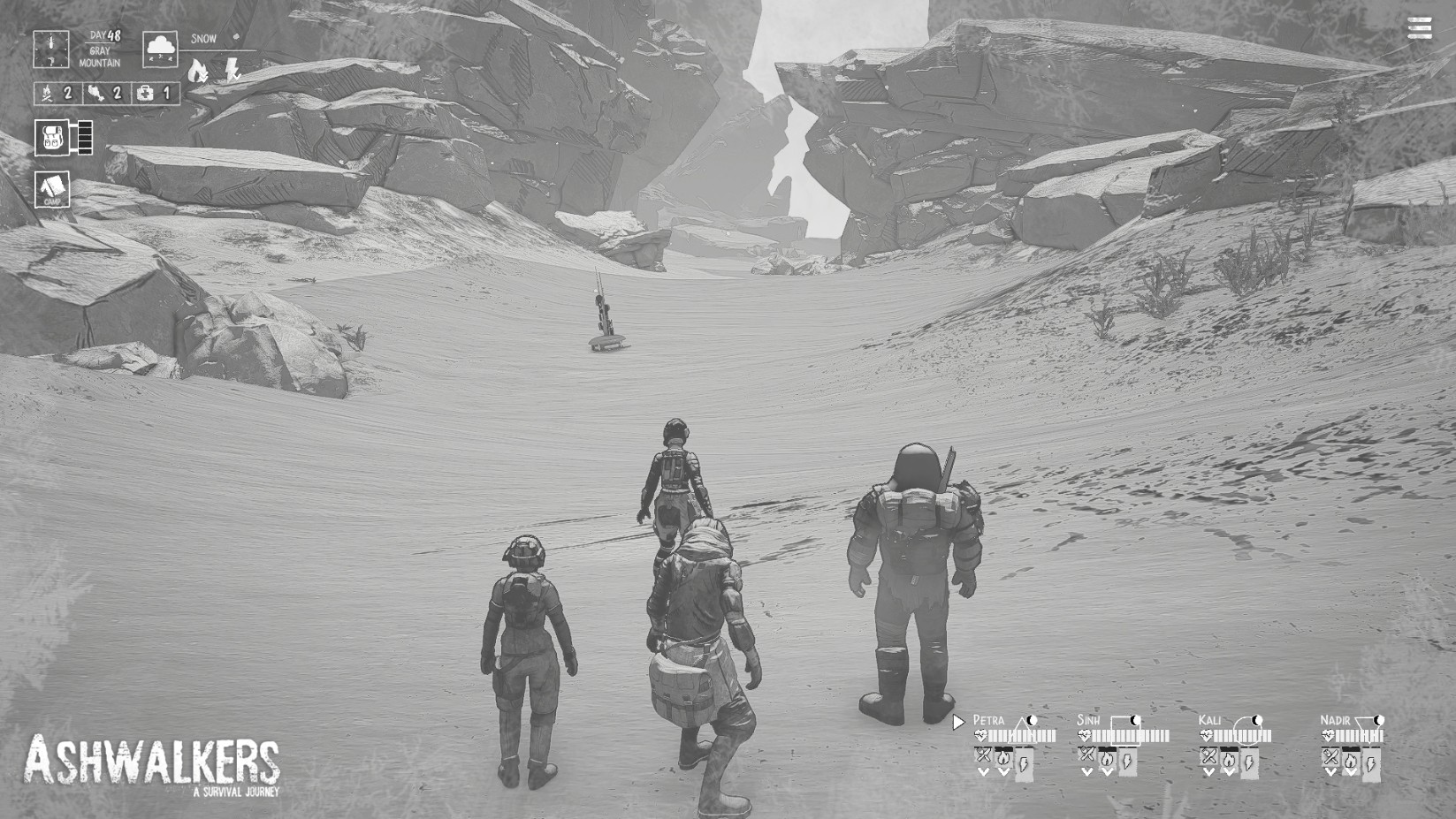 The game tells the story of the Third Squad, a group of four characters which are tasked with finding the Dome of Domes, a place that will hopefully save them and the Citadel they belong to. Previous expeditions have failed to reach the legendary location, so no pressure. We don’t get a lot of exposition in the beginning (collectable notes fill in some gaps), but it’s obvious that the world as we know it has been gone for a long while. The sky is cloudy, the air is hardly breathable, and resources are scarce. Both humans and animals that live outside the refuges’ walls are likely to be dangerous and willing to kill anyone and anything to survive. Yup, sounds like a proper post-apocalypse.

Gameplay ain’t non-existent here, but it’s kept to a minimum: you walk in real time from the beginning of an area to the end, finding resources, triggering (and dealing with) scripted events, and always keeping tabs on the squad’s needs: hunger, warmth, energy, and… uh, not dying. It’s a balancing act of sorts; you shouldn’t spend what you don’t need to, as some sections of the journey are harsher than others, and every choice might have a noticeable impact down the line. Conflicts are also resolved through simple “choose your path” interactions; no combat here, just endless clicking.

It really doesn’t sound that bad, but it’s quite tiresome. Nothing in the game sticks out, starting with the gameplay, which really wasn’t needed if the development team didn’t have ideas and/or enough resources to come up with something enjoyable to play. The game doesn’t throw any curveballs your way, and it’s only as hard as you want it to be. The areas aren’t big enough to get lost in them or needlessly waste resources doing exploration; in fact, they’re wide corridors. As a result, most of the time you’ll just be staring at your party struggling to move through the Ashlands and other locales. Their needs are hitting critical levels? Click the camp button and tell them to eat, rest, talk, whatever. Keep pushing forward. Don’t miss any resources on your way (they glow), only consume stuff when you need to, and you’ll be fine. What’s the point of having a gameplay loop that has no evolution nor variation? Why can’t this simply be a visual novel or something “a la Telltale” but cheaper? 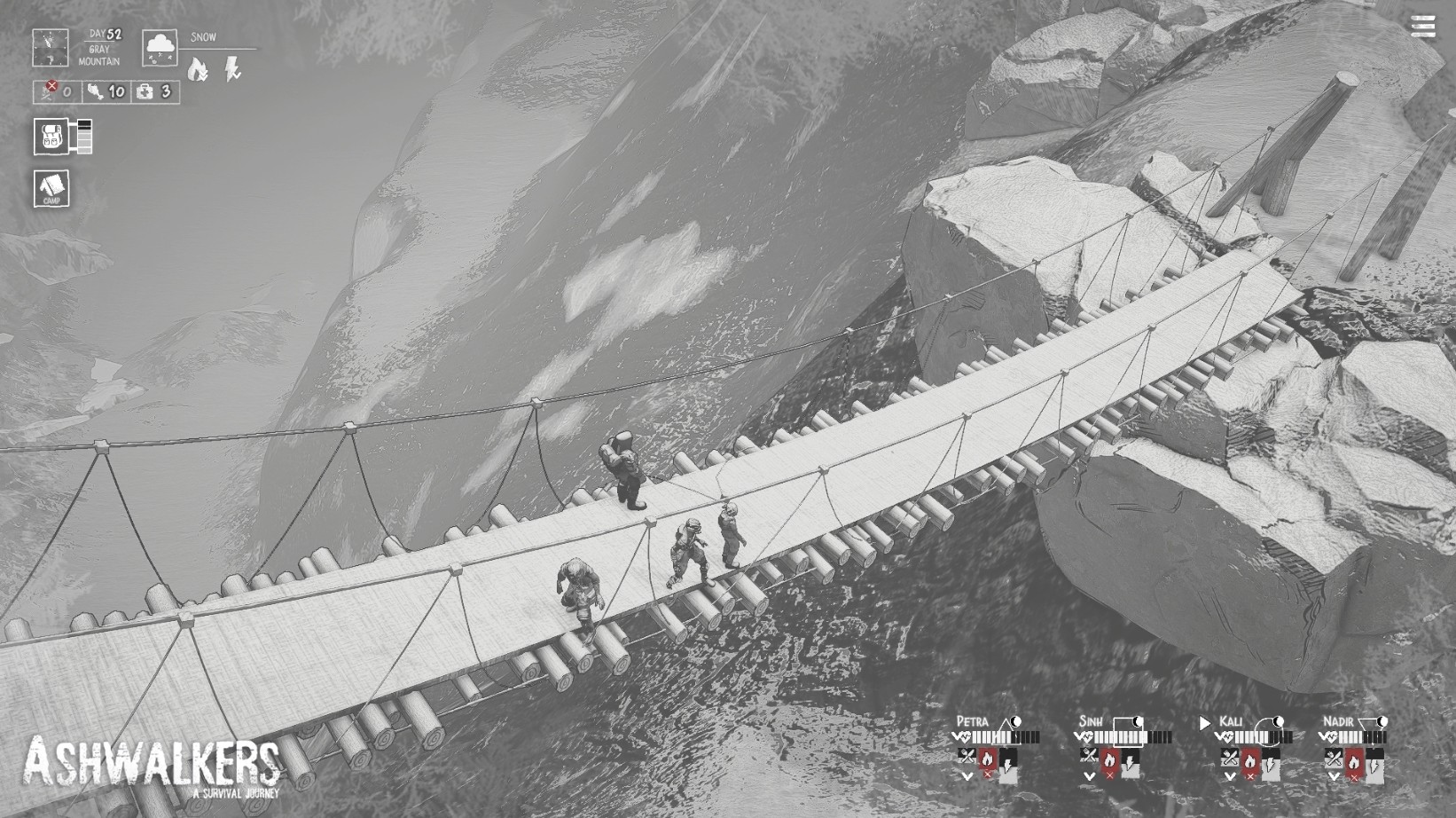 All of these shortcomings could be bearable if the characters, the world, and the writing were interesting enough, but we never really get to dive into them. Like the gameplay, it all feels shallow and undercooked. “The situation is shitty, it’s all in black-and-white, please feel sad!” None of the human drama on display is earned, and, while some crucial events truly feel tense and thought-out, caring about the squads’ trials and tribulations feels extremely hard. Any character interactions are reduced to small descriptive text boxes and chunks of dialogue that are repeated way too often. “I’m hungry, I’m tired, this looks bad.” Personalities beyond the (recognizable) character designs aren’t there.

I like the world and atmosphere presented by Ashwalkers, I really do. And I wish the team at Nameless XIII hadn’t thrown everything at the nearest wall. The gameplay has no voice nor the minimum strength to keep players engaged for its below-two-hours length, and the promise of “34 possible endings” isn’t enough to make most folks redo the journey all over again more than twice. You may meet some new faces across the way and confront a different set of moral dilemmas, but at the same time you’ll be throwing away hours that could be spent playing actually engrossing “narrative games.” Ashwalkers isn’t bad, it simply has nothing else to offer before hitting the middle point due to clearly misguided game design and lazy writing.

This feels like the “early access” skeleton of a potentially unique indie offering with plenty of room to grow, but, as it stands, Ashwalkers is a full release (priced at $11.99 on Steam, Epic, and GOG) and an excellent excuse for short-sighted gamers to keep calling these games “walking simulators.”