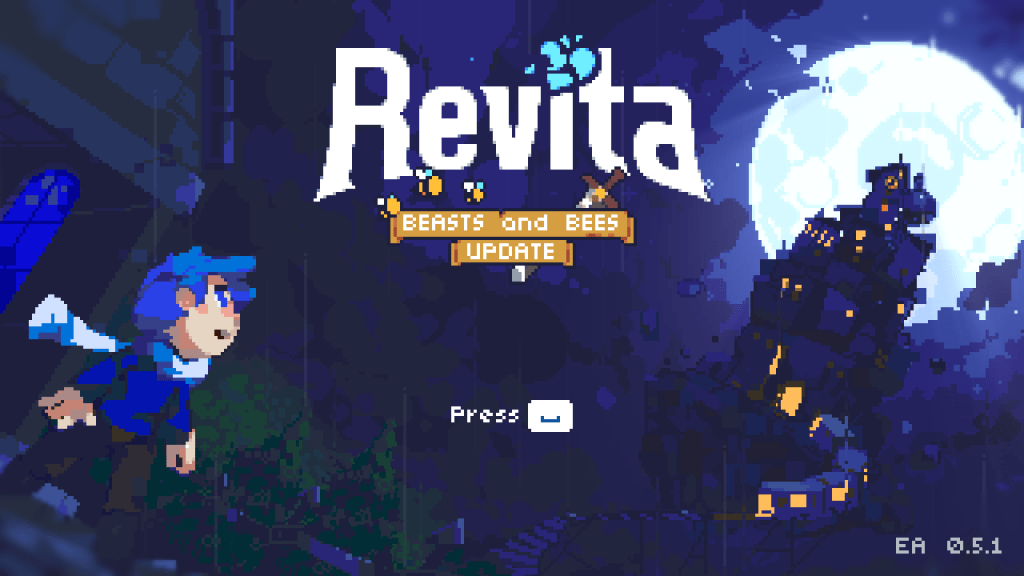 Revita hit early access on Steam last month. Here are my impressions, plus some roguelite-related history.

Roguelites, games which try to “soften” the classic roguelike experience, made a splash after the original Binding of Isaac launched in 2011. Edmund McMillen’s procedurally generated action-RPG, which borrowed quite a bit from the original Zelda titles, quickly became one of the biggest indie sensations on PC and kickstarted an onslaught of roguelites which toyed with a variety of genres, often mixing them skillfully. Nowadays, they are all over the place and house plenty of different approaches, genres, and subgenres. Notable releases include Hades, Dead Cells, Spelunky, Rogue Legacy, Risk of Rain, and Crypt of the NecroDancer.

In a way, the term “roguelite” now refers to a basic set of structural rules that defines games which are all about completing “runs” that aren’t long and never repeat thanks to procedural generation. Also: you die and that’s it. Of course, progression systems which aren’t affected by death (thus the restart of rooms/levels) have been built on top of these games. Normally, every run in a well-designed roguelite has a reward; they can range from new lootable items to new levels or characters altogether. The idea is to keep the experience fresh and ever-growing while also gradually giving players more tools to complete challenging tasks and get to “the end” of the game (they are designed to be infinite).

A secondary goal for these games can be to keep players engaged with effective world-building and storytelling. Of course, their non-linear and repetitive nature presents a set of challenges, so the overarching story and any character development ought to accommodate the basic roguelite features. For example, Rogue Legacy tells the story of a long line of warriors that try to reclaim a cursed castle that reconfigures itself every time someone enters it. When your characters die, they are added to the family tree of fallen heroes, and a descendant (with randomly generated attributes) follows in their footsteps. In the case of Hades, the premise is simple (at first): Zagreus, son of Hades, wants to escape Hell in order to find his true mother. Gods cannot be killed by normal means, but they can be defeated. Each failed escape sends Zagreus back home, where his relationship with friends and foes develops in surprising ways. Even if you “die,” there’s a narrative reward waiting for you back home (alongside permanent upgrades). Every death matters. 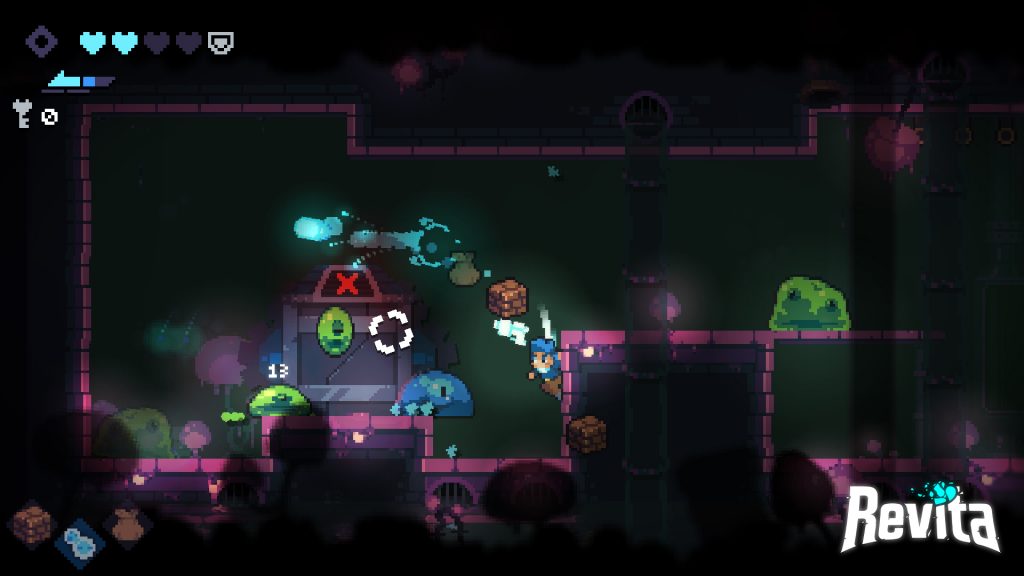 Revita also tackles the challenge of creating a cohesive and ever-evolving narrative head-on. It uses one of the oldest tricks in the book of “How to Make People Care about your Protagonist” too, which is to give them amnesia. You play as a nameless child with no memories who awakens in an unknown metro “with only a vague sense of purpose and desire to reach the distant clocktower, hoping to find answers at the top.” The starting minutes of the game establish a brooding sense of melancholy. Something’s wrong, but you’re not sure what it is. However, the game’s narration is not depressing nor stressful. The world appears to be missing its spark, and you don’t know where you are, but pushing onward yields results: friendly characters start to pop up at the main metro station (a hub of sorts), and the ambience is progressively less lonely.

When it comes to the bread and butter of the game, Revita handles like a typical 2D platformer-shooter. Both controller and mouse + keyboard can be used, but I personally prefer to aim with a mouse in these games, and the movement itself isn’t too frenetic nor complex for a keyboard. The levels aren’t designed around platforming though; the metro takes you to different stations (with different biomes), and then you take an elevator, clearing every floor until you reach the boss at the top. Every floor is procedurally generated, but they’re relatively small rooms that force you to be swift and precise; jumping all over the place or staying mobile doesn’t appear to be a viable approach, at least not outside of boss encounters, which are more dynamic. This is Revita‘s biggest strength, as the runs are fast and make good use of your time, but it feels like its most glaring weakness too.

The game’s first steps teach you about the importance of staying mobile (you can dash and jump on walls), but the actual level design doesn’t seem to encourage that behavior. There simply aren’t enough platforms or walls to make that strategy truly work. Most of the time, you’re better off sticking to your initial position (or somewhere close) and blasting away the incoming enemies. Controlling a “safe area” turns out to be more effective than dashing and jumping around the enemies. The game does work, and it feels great to play, but I think there’s a disconnect between the levels and how the character is supposed to be controlled. 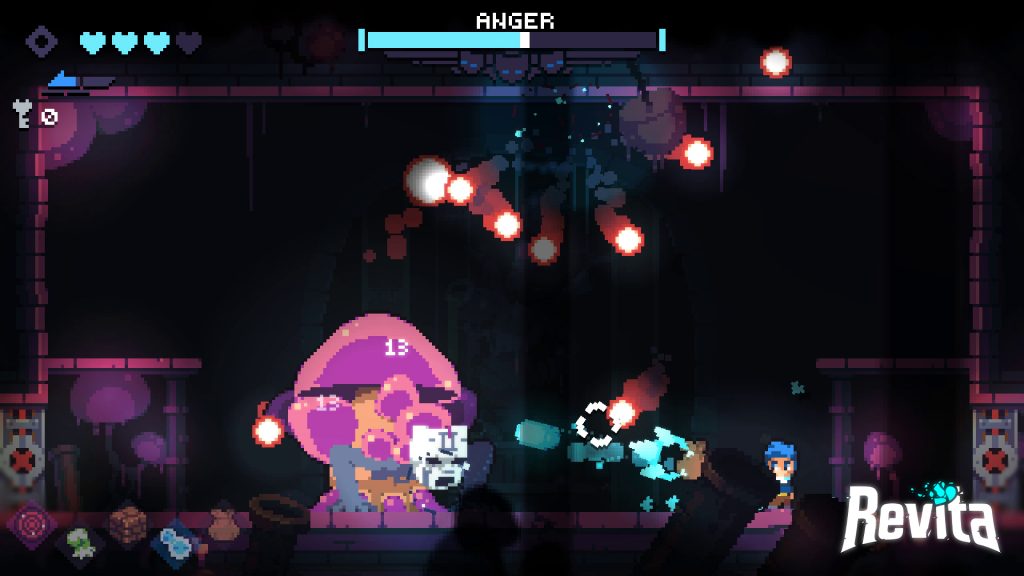 Much more thought out are Revita‘s items and its risk-reward approach to character builds. As you progress through the levels, chests, shops, and statues that accept offerings can randomly appear. The currency used to obtain loot in this game 90% of the time is the character’s health (a few hearts). Each hit by an enemy or a trap costs one heart, so they are extremely precious. If you sacrifice one heart to get an item you desire, you’re left with less life. Balance is key here. Sometimes you get items for free though. And, in case you were wondering, yes, hearts can be regained by spending bars which are filled with the souls of your enemies (it’s less grim than it sounds), but this process is slow, and you might want to face each boss with as much as health as possible.

I’ve yet to come across truly crazy items, and it appears that developer BenStar was more interested in building a cohesive and well-balanced game than a roguelite which purposedly (and gloriously) goes off the rails with insane item synergies more often than not, such as Binding of Isaac. That is not to say Revita lacks impactful items and equipment; it’s simply more restrained.

The visuals and audio are surprisingly solid for an early access which just launched, too. The level of polish on display is remarkable, and you can tell BenStar held off releasing an undercooked version of the game. Enemy variety was somewhat limited at first, but regular updates are taking care of that. Nonetheless, Revita looks great, and there’s a solid artistic vision behind the characters and environments, which perfectly match the vibes the story is going for. I must also applaud the soundtrack, which avoids being senseless retro noise and delivers memorable melodies which often remind me of Cave Story‘s bangers. Needless to say, all these elements are still being nurtured and enhanced alongside the gameplay and (especially) the content. This is an early access title which aims to hit 1.0 by the end of the year or early 2022, and the first major update (a big one) hit a few days ago. Take a look at the current roadmap below: 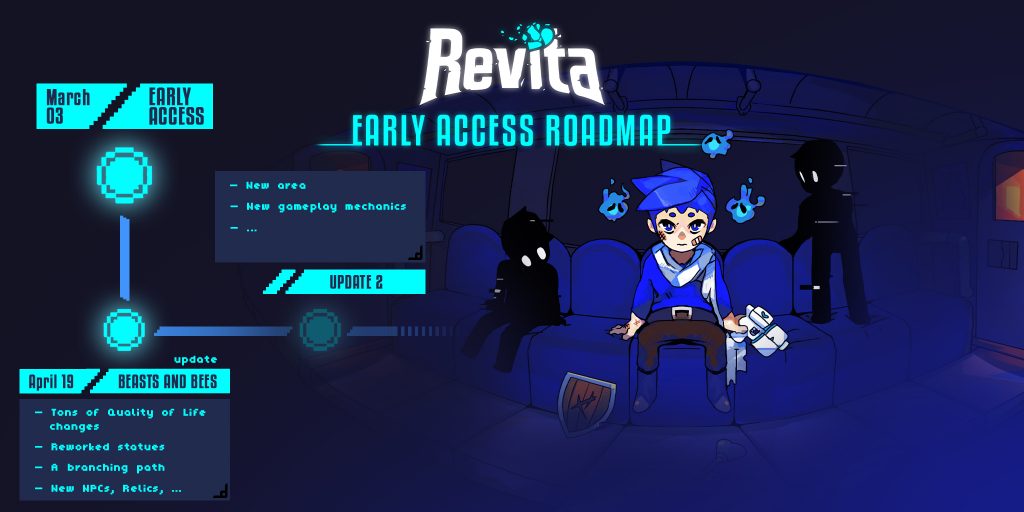 If you’re interested in a slimmer, faster-paced roguelite experience with clear goals and a promising future ahead, you might want to consider giving Revita a go. It’s currently selling on Steam for $14.99, a price that will go up as development continues and the game grows bigger (all planned updates are free).