The first episode of The Falcon and The Winter Soldier has finally arrived on Disney+, six months after its original release date. New World Order is a strong start for Marvel’s fledgling series.

It is immediately obvious why Marvel had originally intended for The Falcon and The Winter Soldier to be the first MCU series on Disney+. The series returns to the traditional Marvel tone that audiences are all warmly familiar with, after WandaVision debuted with a comparitively unfamiliar one. If WandaVision wasn’t what Marvel fans were expecting from an MCU series, The Falcon and The Winter Soldier definitely is. The show’s first episode feels like a direct continuation of the last two Captain America films, and the score feels particularly similar to Captain America: The Winter Soldier in places.

Marvel fans who were dismayed at WandaVision‘s slow start will be grateful to know that this series definitely starts with a bang. The episode has a few action scenes to keep the episode’s pace up, which is good as the runtime clocks in at around 42 minutes (not including the end credits). That’s a pretty standard length for an action drama show, but flies by in what feels like half the time. The action scenes are also accompanied by plenty of intimate moments, as we see what Sam Wilson and Bucky Barnes are doing following the events of Avengers: Infinity War and Avengers: Endgame. 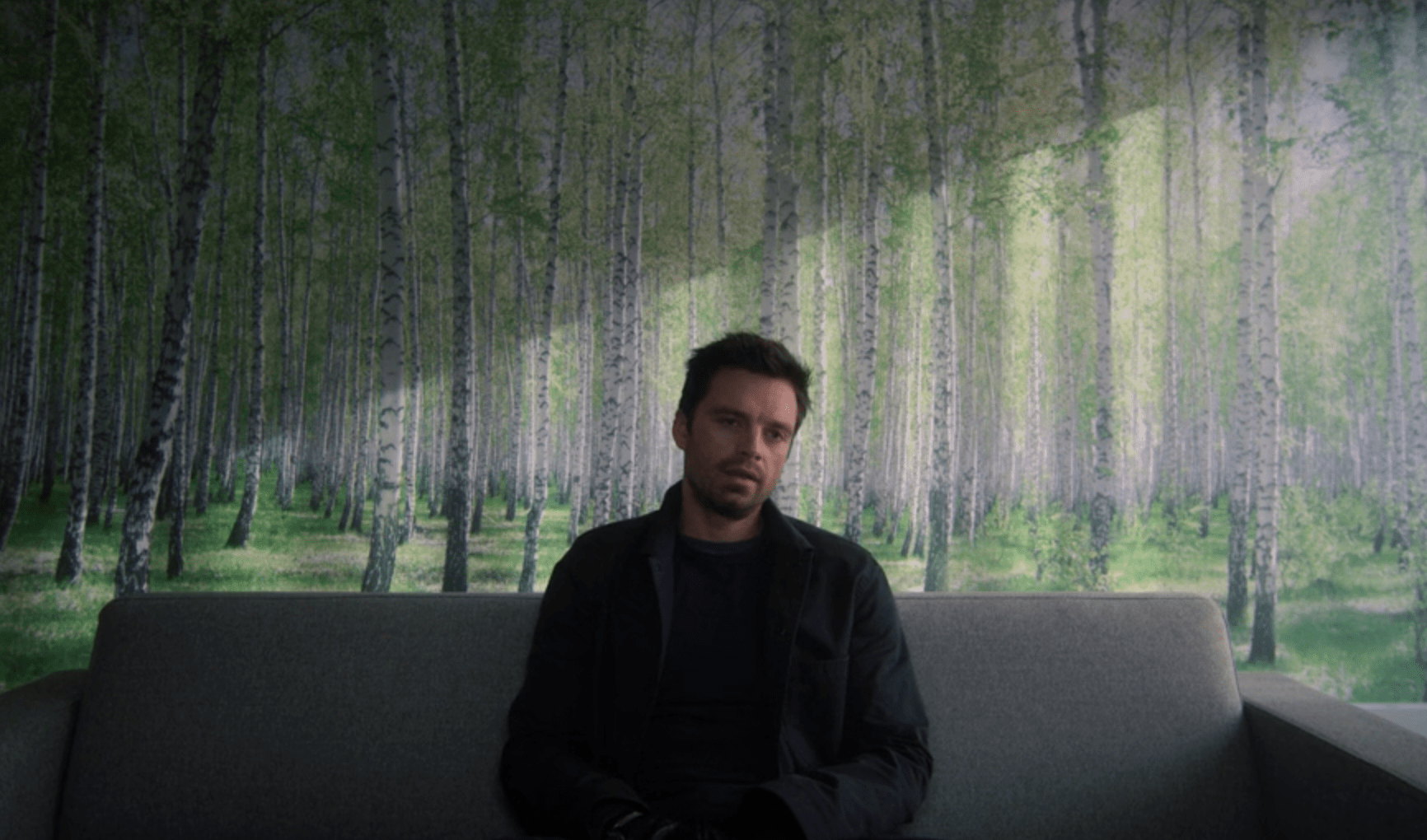 Not everything worked quite as well as Marvel intended, but for the most part everything landed. It is definitely nice to spend more time with two of the MCU’s less loved characters, and both lead actors are typically fantastic. Anthony Mackie oozes natural charm as Sam Wilson, while Sebastian Stan shows off some unexpected comedic delivery while doing great work portraying a man overcoming a substantial amount of grief. The Falcon and The Winter Soldier‘s first episode was a solid start to a promising new superhero action series.

The first thing to note is that our two eponymous heroes don’t ever share the screen together in this opening episode. Both Sam and Bucky are living their own separate lives, since their only mutual friend Steve Rogers retired, and the Avengers presumably disbanded. Sam gets about two thirds of the episode’s screentime, which makes sense as he has a lot more going on at the moment. The episode’s opening and final scenes affect him directly, so it makes sense that he takes the lion’s share of the episode’s runtime.

Throughout the episode, we see how the passing of Steve Rogers has affected Sam. He still mourns the loss of his best friend, which only happened six months ago (Rogers’ death is never mentioned, but at the very least it seems he faded back into obscurity after handing over the shield). He has returned to the US Airforce, no doubt finding more comfortable fighting the good fight than to go back to being a grief counsellor. 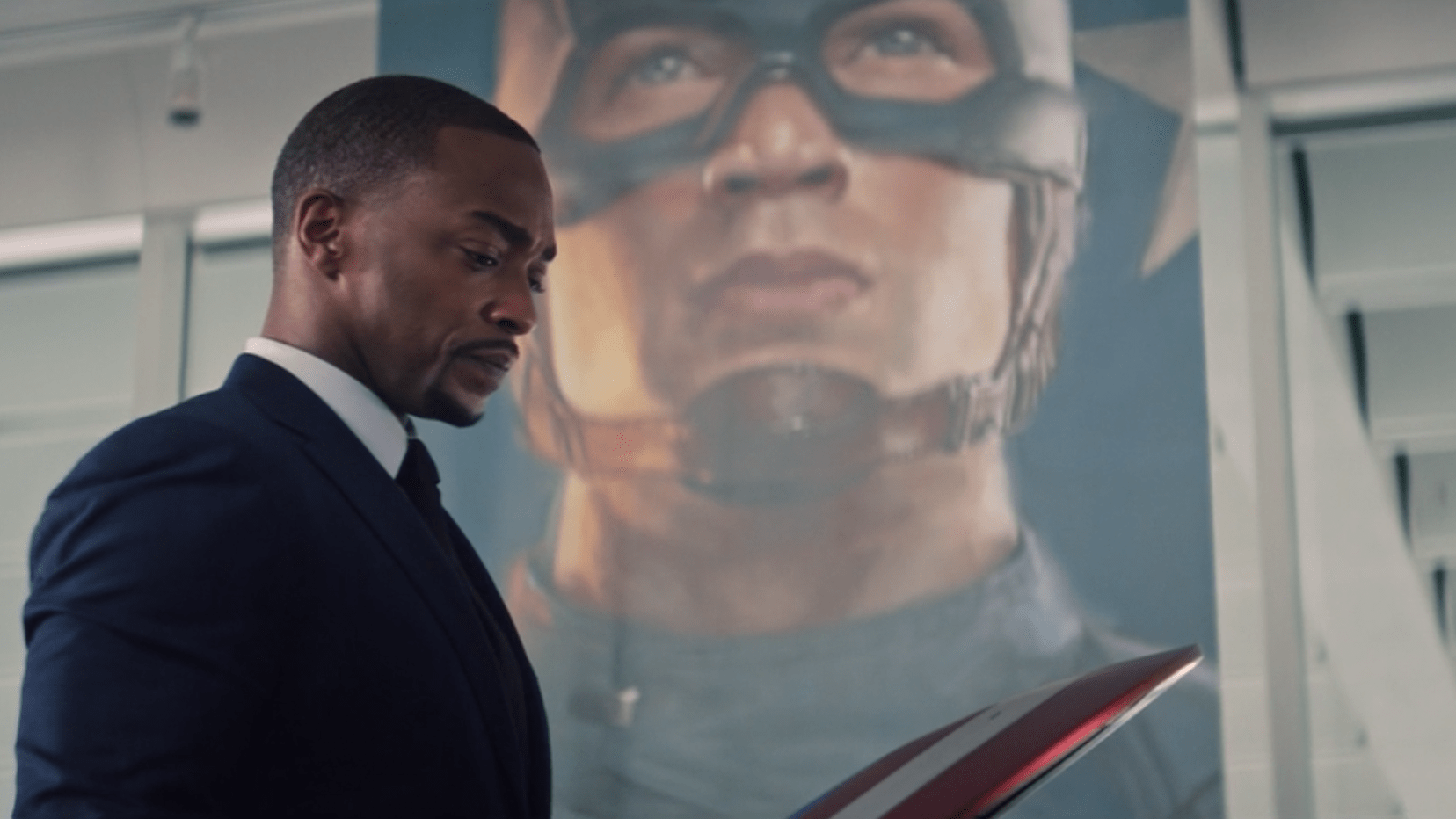 The opening scene immediately shows the metaphorical weight of Cap’s shield, and the burden that Sam has on his shoulders. He’s still grieving and feels it would be inappropriate to continue Captain America’s legacy. After all, what man could ever live up to the only human worthy enough to lift Mjolnir? The scene is shot as a series of close ups on Sam and the shield, which does a good job of conveying the intimate and personal nature of what’s happening.

Later, Sam delivers the shield to a Captain America museum exhibit, where he makes a speech confirming that he doesn’t think there should be a Captain America without Steve Rogers. This is followed by a wonderfully tender conversation between Sam and Rhodey, who attends the exhibit’s opening. It is clear why Don Cheadle felt it was okay to reveal he was appearing in this series; this was a very low key cameo and, while Rhodey could yet appear in more episodes, it doesn’t seem like he will be donning the War Machine armor at this stage. 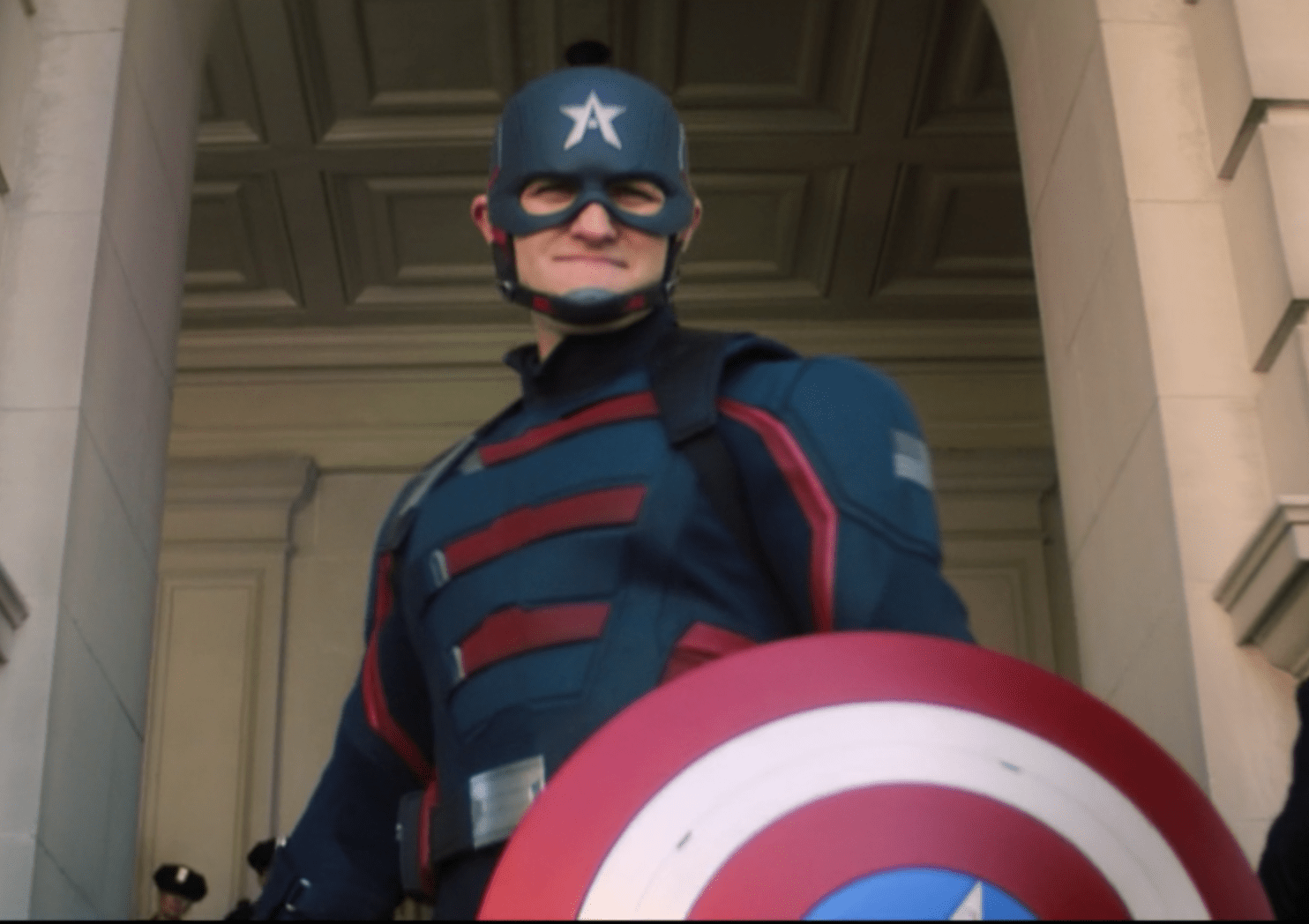 Sam’s grief comes to a head at the end of the episode when the US Government reveals that they have immediately pinched Cap’s shield from the museum and given it to their own newly-appointed Captain America. Anthony Mackie does a tremendous job at conveying Sam’s sadness and indignation as he watches this new Cap wave to the cameras – you can understand America’s need to appoint a new Captain America, but it doesn’t feel very respectful so soon after Steve’s loss – you have to wonder if he feels like he should have taken up the mantle after all, rather than have some stranger assume it instead. The series will doubtlessly explore his feelings on the matter over the next few episodes.

Sam also had the best action sequence of the episode, which feels like it’s straight out of a feature film in terms of choreography and special effects. Batroc returns in his first appearance since his fight with Steve Rogers in Captain America: The Winter Soldier, and it’s a joy to see Falcon go up against his acrobatic fighting skills. The sequence starts off relatively small scale for the MCU, but quickly ratchets up the stakes and the tension. There’s some great camera work throughout the chase. The tracking shots aren’t quite as long as the ones we got in Netflix’s Daredevil series, but they’re still long enough to show off some impressive fight choreography.

From there, it only gets better. Batroc and his men escape from the plane in wingsuits with hostages attached, and we get an explosive pursuit through the rocky gorges in the Middle East (it’s unclear which country the action takes place in). Batroc summons helicopters armed with rockets, but Falcon is able to dispatch them with ease with the help of his trusty drone Redwing, returning for the first time since its debut in Captain America: Civil War. It’s great to see Redwing’s full combat capabilities finally demonstrated after so long. The tension builds when Batroc nears the borders of Libya, giving Sam a limited window to bring him in without causing an international incident.

Predictably, Batroc is defeated and no hostages are killed. It seems Batroc is destined to only be used as a warm-up baddie for our heroes, after his similar role in Winter Soldier. That’s fine, as this happens literally in the first 15 minutes of the show. This was the most bombastic action sequence shown in the trailers too, so it’s exciting to imagine what the other five episodes have in store for us. 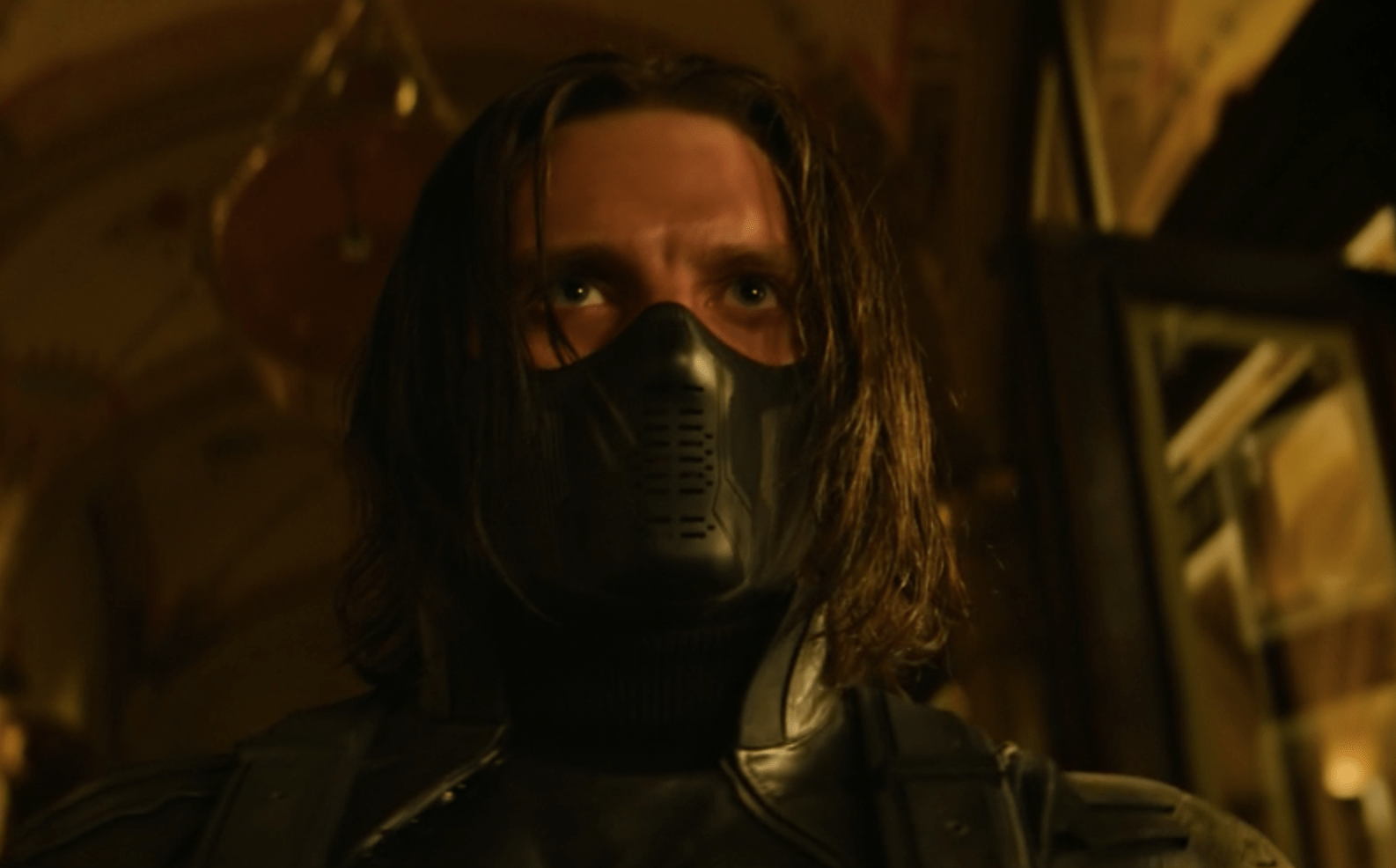 Bucky’s storyline is less explosive and more character driven, although he gets his own exciting introduction as we’re treated to another flashback to his time as the Winter Soldier. It’s very cool watching this deadly assassin take out targets in a hotel with cold efficiency, but the sequence ends on a haunting note as Bucky kills an unfortunate witness to the assassination, who’s so shaken by the whole thing he can’t fit his keys in his hotel room door. It’s particularly disturbing when you recall Bucky’s previous assertion that he remembers every person he’s killed, and how horrifying those memories must be.

Indeed, it is quickly confirmed this was a nightmare as Bucky speaks to his therapist. Barnes is dealing with his grief in a very different manner to Sam, though it must be said that he has a lot more guilt to process. He’s very uncomfortable with therapy and has a hard time to following his therapist’s rules; she uses tough love to help Bucky deal with his demons. Her own wit is wonderfully punctuated by a montage of Bucky tracking down a shady politician and scaring the life out of her.

However, while it initially seems Bucky is trying to shut out everyone in his life (his therapist mentions he’s ignoring texts from Sam), we see that he isn’t too far gone after all. His delightfully touching friendship with his elderly neighbor (who just so happens to be the father of that boy he killed in the flashback) is a welcome realization that he does need some kind of social interaction, and you can’t help but root for him in his spontaneous date with the charming and quirky Asian food vendor. It’s strange to remember that Bucky was actually a bit of a ladies man back in the 1940s, but like Steve, he feels like a man out of time in the modern dating scene.

It isn’t clear what comes next for Bucky. It will likely take the emergence of LAF/Flag Smashers to reunite him with Sam. The shady organisation, who are most likely lead by Helmut Zemo, want a return to the days of the Blip and a world without borders, which ties into the episode’s title: New World Order. We don’t see much of them in this episode; Sam’s airforce buddy Torres says he’s looking into them while they’re hanging out in Tunisia, and we get a short scene in Switzerland where he is beaten bloody by a superpowered LAF member.

It seems suspicious that there is a new bad guy in the world with super strength at the same time a new Captain America is revealed, but we’ll have to see if there’s any link between the two. It seems that the woman who hands out the LAF masks is the same girl we see fighting Sam and Bucky in the trailers, played by Erin Kellyman; it’s her biggest role since playing Enfys Nest in Solo: A Star Wars Story.

There were some things that didn’t work quite as well in this episode. The ending was rather abrupt, though the reveal of the new Captain America (confirmed as John Walker in the credits, who some Marvel comics fans will be familiar with) was admittedly an enticing cliffhanger. But the episode just ends there, which comes across as a bit odd as it didn’t feel like it was leading to a crescendo.

The subplot involving Sam’s sister Sarah’s financial troubles was probably the least interesting of the lot. Though I personally found it interesting to see how the banks operate when half of the population has no financial records for the past five years, I doubt most people will be similarly enthused. Though it did make an important point that Sam does not have the funds of Tony Stark, and despite being a superhero, as a black man the econcomic system will always be weighted against him and his family. While that is an important and interesting point to make, the writers may have their work cut out to make sure Sarah’s subplot doesn’t feel like a distraction from the real meat of the superhero action adventure.

The first episode of The Falcon and The Winter Soldier is a strong entry to the series that was supposed to kickstart Phase 4 of the Marvel Cinematic Universe last year. While it won’t spawn as many fan theories as WandaVision, it offers a lot more of the standard Marvel formula that some fans had been expecting. It doesn’t soar to any new heights, but it’s certainly entertaining.