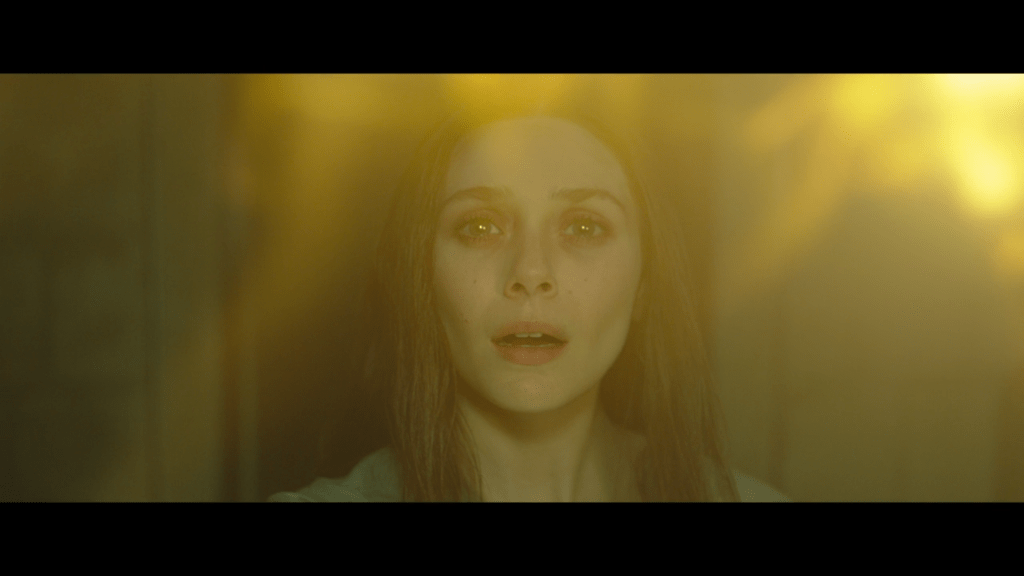 This week’s WandaVision offers plenty of answers and opens many doors ahead of the finale.

I wasn’t a big fan of episode 7, to be honest. I want to get this out of the way first. Beyond the cute Office-ish opening, Monica’s cathartic transformation, and the big musical reveal at the end (which is already a fan-favorite scene), I thought it lacked punch and the playfulness displayed in previous episodes of WandaVision. It also largely felt like a transitory chapter in a show that had defined quite well each step of its way. However, a lot of what happened last week paid off big time in episode 8.

This chapter is striking from the get-go, as we find ourselves in Salem, 1693, watching a covenant of witches turn against one of their own: Agatha. She is accused of using forbidden (the darkest) magic, even by her own mother. Once they try to destroy (or subdue?) her, she turns their powers against them, sucking the life out of her former sisters and mama. It’s an unexpected scene that effectively expands on last week’s reveal and shows, once again, that the MCU is not afraid of toying with the arcane arts. Yes, witches were real, much like the mages and wizards unveiled by 2016’s Doctor Strange. WandaVision just got substantially wilder. 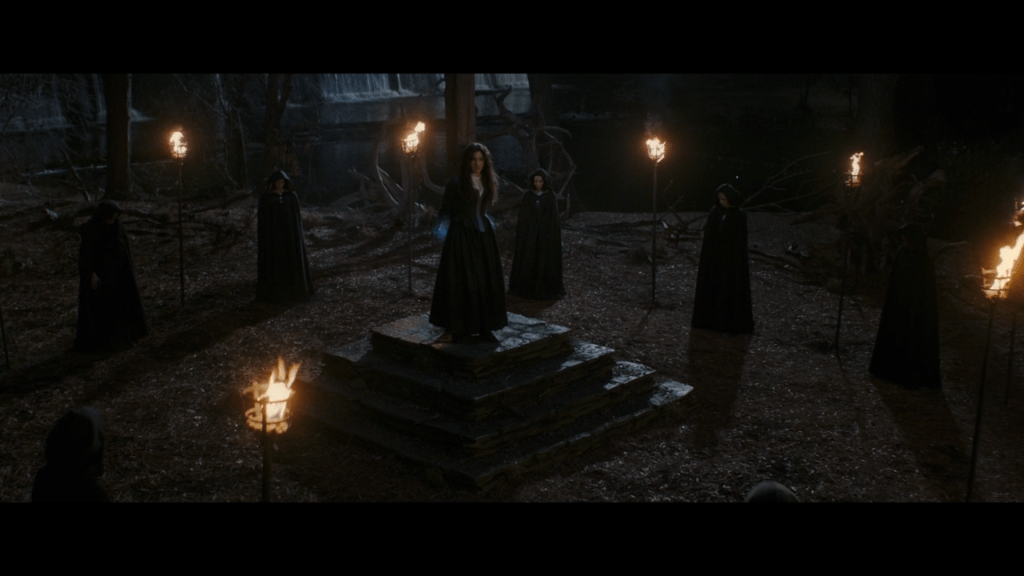 For Kathryn Hahn, this scene is also an opportunity to step outside of Westview and play a younger (digitally de-aged) version of Agatha who goes from utterly melodramatic to deliciously evil in just a couple of minutes. Her powers are not fully defined in this episode, but we can guess after this scene that one of the things she wanted was control over death. She doesn’t look super young in present-day Westview, but she has managed to stick around for many centuries.

So, what does she want with Wanda? Is she behind every relevant event so far in WandaVision? Well, we learn early on that she wants to know how Wanda has rewritten reality, claiming that magic is unknown to her, so no, Agatha wasn’t behind the Hex. She was merely an observer who became aware of what had transpired and wants to take advantage of the situation. A key point here is how she tells Wanda about magic, runes, and whatnot as if she understands her. Agatha genuinely believes Wanda is a literal witch. But we know for a fact she doesn’t have traditionally magical powers, right? In order to find an answer, Agatha opens up Wanda’s memories…

Before dealing with the “magical or not powers” question, I’d like to talk about the first flashback sequence (or re-run) starring Wanda that we get: the night when her parents died. I knew this was coming, as you couldn’t fully explore Wanda’s character and background in WandaVision without delving into the darkest moment of her past. Turns out a favorite pastime of the Maximoff family (no Fassbender cameo here) was watching American sitcoms on DVD; we get to see physical copies of The Dick Van Dyke Show, Bewitched, and Malcolm in the Middle among others. This is further confirmation that Wanda did indeed create the Hex on her own. All is fine and heartwarming until a Stark bomb drops on their home. She wasn’t lying or exaggerating in Age of Ultron when she blamed Tony for the death of her parents. Why would she? 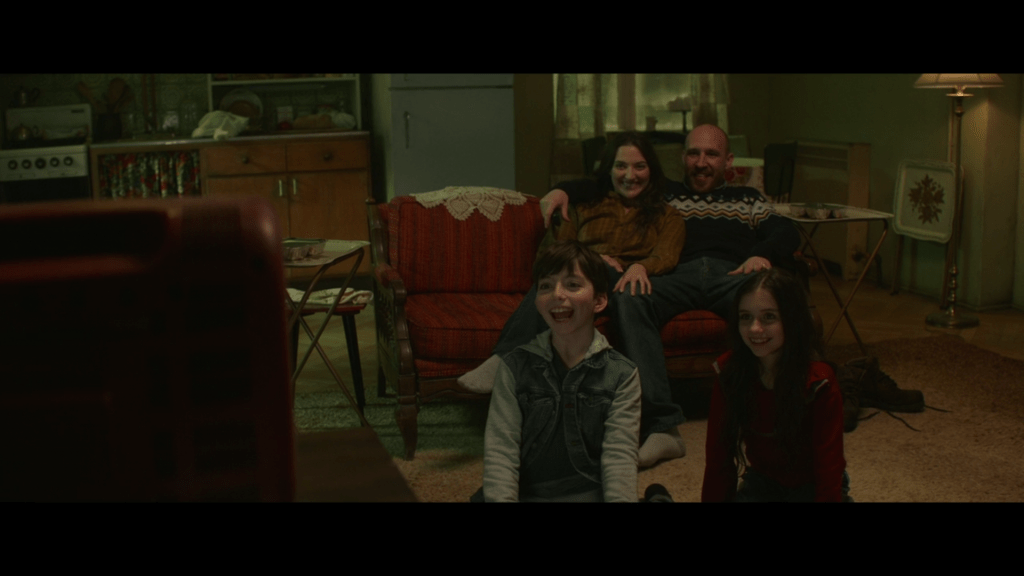 This leads into arguably the biggest segment of the episode, where we get to see first-hand how Wanda got her powers via HYDRA’s experiments with Loki’s staff (which housed the Mind Stone). We always assumed that Wanda and Pietro’s potential was merely unlocked by the Stone, and that seems to still be the case for (now deceased) Pietro, but Wanda’s experience was actually much weirder. Without even touching the staff, she has a vision of the hidden Stone floating and coming to her, along with a brief semi-clear image of the comic-booky Scarlet Witch. Was that a vision of her future self or someone else? The HYDRA scientists cannot explain what just happened, but Wanda gains the powers that we first saw her use in The Winter Soldier‘s post-credits scene. Footnote: a Wolfgang von Strucker cameo here would have been extremely cool, but we they didn’t even get Aaron Taylor-Johnson back, so yeah…

After that, Wanda’s memories jump to the days following her brother’s death at the hands of Ultron. She’s in the Avengers’ new building watching sitcoms alone, but she finds comfort in Vision, who saved her from certain death during the destruction of Sokovia, in case you don’t remember. While this scene isn’t super important for the plot’s development, it solidifies Wanda and Vision’s relationship, especially if we consider how they were suddenly much closer at the start of Civil War. Once again, the MCU works forwards and backwards to make everything much more cohesive. WandaVision (and probably most of the upcoming shows) is definitely as important as the big-screen entries of the long-running franchise.

The next stop is Wanda’s assault on the SWORD compound. Unless there’s no assault. She’s angry and frustrated following the events of Infinity War and Endgame, but she doesn’t go berserk on SWORD while trying to find Vision’s corpse. Instead, she goes into Tyler Hayward’s office, and he walks her to a window over the lab where they are disassembling Vision’s body. The image is shocking and completely dehumanizing, almost if done on purpose. Hayward’s language is also quite aggressive and the opposite of what a super-powered individual needs to hear at that moment. He even tells Wanda that she can bring him back. If you needed further confirmation that Hayward is a bad guy, there you have it. And the security tape we saw a few episodes back was 100% bullsh- for sure, since Wanda doesn’t leave with Vision’s corpse. Now the question is whether he just wants to push SWORD’s agenda no matter what or he is actually a secret villain yet to be unveiled. We have an interesting week of Mephisto theory-making ahead, something which has plagued most discussions about WandaVision for weeks now.

Before coming back to the present-day, hexed Westview, we also get to see Wanda’s arrival at the original, sad Westview. It seems to be a depressing town for some reason (maybe Agatha was already doing shady stuff), but Wanda visits it because a letter leads her there. And the reveal that follows is heartbreaking: Vision had bought a piece of land for them to build a house “to grow old in.” This is the tipping point for her, and the final key of the puzzle that explains why she chose to fabricate a sitcom-themed reality (and a recreation of Vision) in that particular town. Apparently, this is all her doing without any external input. Hayward pushed over the edge and later villainized (and tried to kill) her. Agatha Harkness wants to learn her secrets. Different and colliding agendas. 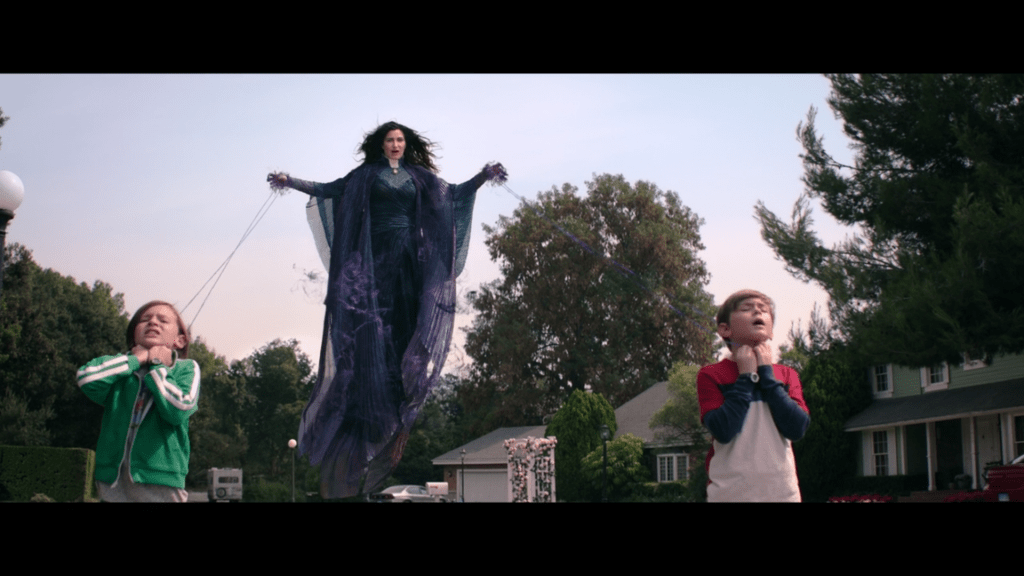 The closing scene of the episode finally brings back Tommy and Billy, and it appears that Agatha (now wearing a full-on witchy outfit) is simply using them as leverage in order to crack Wanda and learn her secrets. Now here’s the big stuff: she says Wanda is a “being capable of spontaneous creation” and a wielder of “Chaos Magic,” which makes her the Scarlet Witch. After getting a definitive confirmation that Wanda is behind the Hex (we still don’t why it’s hexagonal) and hearing the words “Chaos Magic,” maybe we can seriously consider the idea she is harnessing mystical powers after all. Again, the potential unlocked by the Mind Stone could very well be that of mutant-like capabilities (Pietro had no magic-like powers), but it seems like something else was already inside her since the moment she was born.

In the comics, Chaos Magic was thought to be non-existent even by the Sorcerer Supreme himself. The Elder God Chthon used it to rule the Earth before being banished by mages. He was sealed within the future birthplace of Wanda Maximoff, who would later be “touched” by Chthon’s hand. Her mutant powers first manifested as energy manipulation, and she didn’t learn about Chaos Magic until later, when she was tutored by… you guessed it, Agatha Harkness. Even if they don’t follow this piece of lore closely, it explains a lot of stuff both in WandaVision and previous MCU entries, plus Wanda’s presence in the upcoming Doctor Strange sequel. By the end of this series, she will be the Scarlet Witch. This is Elizabeth Olsen’s show, and she has received one hell of a gift.