‘WandaVision’ Episode 4 Review: Outside the Snow Globe (or Hexagon) 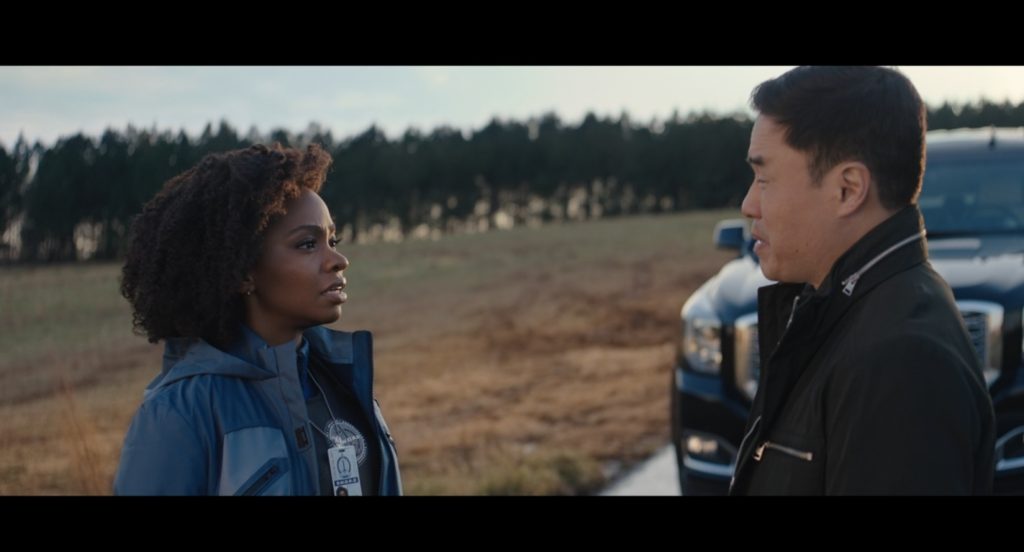 If you were anxious to find out what is going on in WandaVision, you’re in luck with this week’s episode.

WandaVision has so far been a peculiar ride to say the least, mixing the sitcom genre (across different eras) with intrigue that points to greater events happening outside of the seemingly Wanda-created televised reality. While the first three episodes have kept viewers in the dark and focused on the sitcom setting (besides some “interferences”), the overall plot starts to take shape with the fourth episode, which focuses on Geraldine, or should I say… Monica Rambeau. Spoilers from here on out.

Last episode ended with Geraldine being (literally) thrown out of Westview and “Daydream Believer” by The Monkees playing over its final seconds and credits. So of course, this is a Geraldine-centric episode. And yes, I’ll now start calling her Monica Rambeau, as this chapter starts with a Snap and shows us that she was one of the people that disappeared after the events of Infinity War. When she reappears in a hospital, she looks for her mother, Maria Rambeau (played by Lashana Lynch in Captain Marvel). We find out that she had cancer, got better while her daughter was away, and then died before she came back. Sad story.

I was actually expecting a visit to Maria’s grave right after this intense opening (and the Marvel Studios logo), but the episode then jumps right into the main plot and confirms that yes, Monica is a member of SWORD, as teased by her necklace in the last episode. At SWORD’s headquarters, she is greeted by Tyler Hayward, acting director of the organization. We also learn that Maria Rambeau founded SWORD and ran the show until she died. Monica apparently focused her career on space exploration and even mentions an astronaut program. She is now a captain and wants to stick to that rather than become the new director, too.

While she was away, SWORD has shifted its focus towards the development of “sentient weapons” beyond the usual “observation and report” (part of the acronym). That is bound to pay off down the line, especially after Spider-Man: Far from Home‘s post-credits scene that showed us Nick Fury in space surrounded by Skrulls and developing new tech and ships. Also, Secret Invasion is coming to Disney Plus, so yeah… After all, outer space in the MCU has become extremely dangerous. Earth needs to protect itself, as the Avengers might not be enough to hold off major threats. 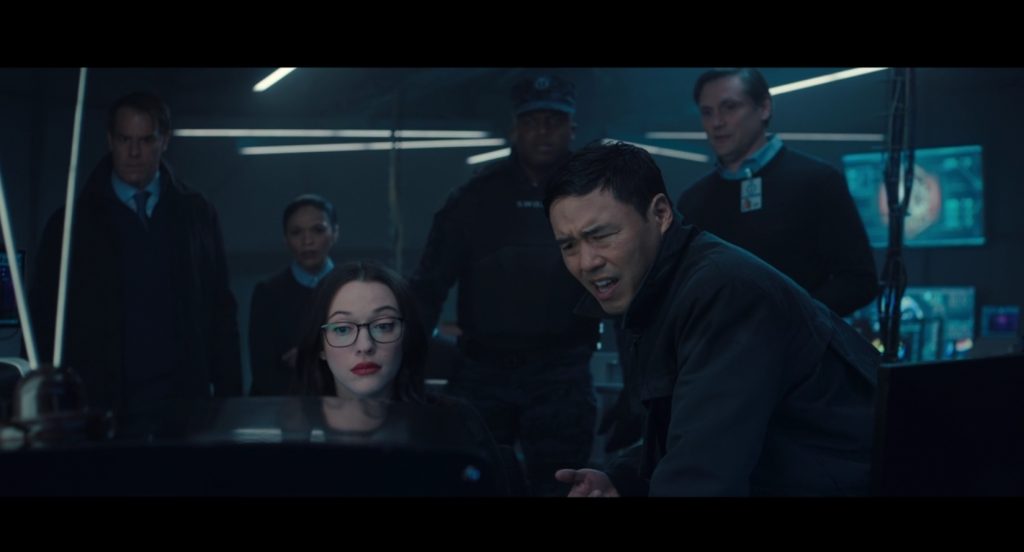 Anyway, Rambeau is told she cannot get off the ground for now, as established by her mother in the event she ever returned. She is given a new assignment and sent off to Westview… or Eastview. What is going on here? When she arrives at the outskirts of Westview (there is a big banner that reaffirms this), she meets FBI agent Jimmy Woo (Randall Park) and two cops who claim that Westview does not exist and they are from Eastview before driving off into town. As they can’t contact anyone inside Westview and the cops appear to suffer from selective amnesia, Monica whips out a helicopter drone (painted in Captain Marvel colors) and tries to pilot it over the town before it disappears. She then approaches and touches an energy field which can only be seen from up close before getting sucked in. And that’s how she ends up where we first found her. Needless to say, the town (or whatever contains it) is messing with everyone’s heads and does not want external forces to interfere.

Following these events, SWORD starts to establish a good ol’ fashioned quarantine perimeter around the town, and here we can see the Disney bucks on-screen. Everything looks theatrical release-worthy, from the cinematography to the sets. At this point, the episode starts to feel a bit like a mix of X-Files and the part in the first Thor where SHIELD surrounds Mjölnir. With all the crazy stuff that has gone down in the MCU by now, it’s nice to revisit a more grounded and traditionally scientific environment. And this is where Darcy (Kat Dennings) comes back in. She is now a doctor in Astrophysics, and we get no mention whatsoever of Jane Foster or her intern-boyfriend. I mean, it’s been a while since 2013, so that’s perfectly normal. She starts studying the phenomenon right away and finds out relic radiation dating back to the Big Bang and, more interestingly, a hidden broadcast frequency. The field surrounding the town appears to be oddly hexagonal, too. Hexagons have been all over WandaVision, so be on the lookout for them.

With the help of old TVs, Darcy and a sizeable SWORD team begin studying the broadcasts, which are the WandaVision episodes we have been watching up to this point. F*** yeah, metafiction! Aside from becoming addicted to the show, Darcy discerns an old radio while watching the episodes and tries to reach Wanda with a signal that carries Jimmy’s voice. Obviously, this is the “Wanda, can you hear me?” part of the second episode, one of the many during which Wanda feels that something is not right in Westview. Another parallel effort by SWORD sends a guy in a hazmat suit through an underground access to the town; as soon as he crawls through the unknown field, his hazmat suit transforms into a beekeeper’s, and the rope that connects him to the outside is severed. Much like the drone that Monica sent in at the beginning of the episode, this man becomes part of the “retro reality” that is now Westview. 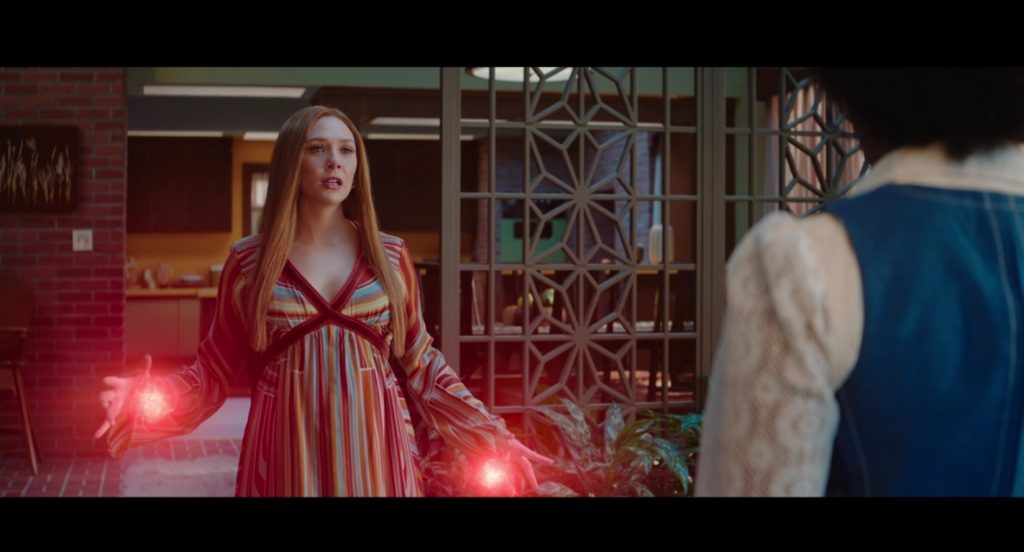 After calling off the “mission,” Jimmy and Darcy sit down to watch the 70s episode of WandaVision up to the point where Monica (Geraldine for Wanda) disappears. There is an obvious gap in the broadcast that hides what truly happened, though we, as the audience of the real series, get to see the missing bit immediately afterwards; Wanda senses that Geraldine doesn’t belong there, gets angry, and sends her flying through houses in a straight line, eventually pushing her out of Westview. That’s the ending of the third (real) episode. Monica isn’t zapped out of the “reality bubble” by an external force, but by Wanda herself, who also senses she’s not fully in control and momentarily sees Vision as dead-looking as at the end of Infinity War before forgetting about everything that just transpired.

And that’s the episode’s final question: If Wanda isn’t in control of this reality and keeping everyone in, who or what is? The Scarlet Witch feels at home in Westview, where she’s living a dream-like state with the love of her life and leaving all the pain behind. Both get to keep their powers, and we’ve been led to believe she was in control and merely a bit unstable from time to time, but there’s more than meets the eye, someone or something above her, and she’s finally starting to realize it. Again, Vision himself questioned this as well, but back then it only felt like a way of saying “Wanda, what are you doing? You have to let go.” Now we know there’s more to it.

I won’t discuss the WandaVision fan theories or supposed leaks floating around, and avid comic readers probably have almost the whole season figured out by now, but seeing the events gradually unfold in such an elegant manner has been extremely fun and satisfying so far. With Monica Rambeau now out of Westview (and maybe out of the hexagon’s influence), SWORD might be able to better understand what is happening and how to stop it. Meanwhile, Wanda and Vision have two babies to look after and a new decade of television ahead.