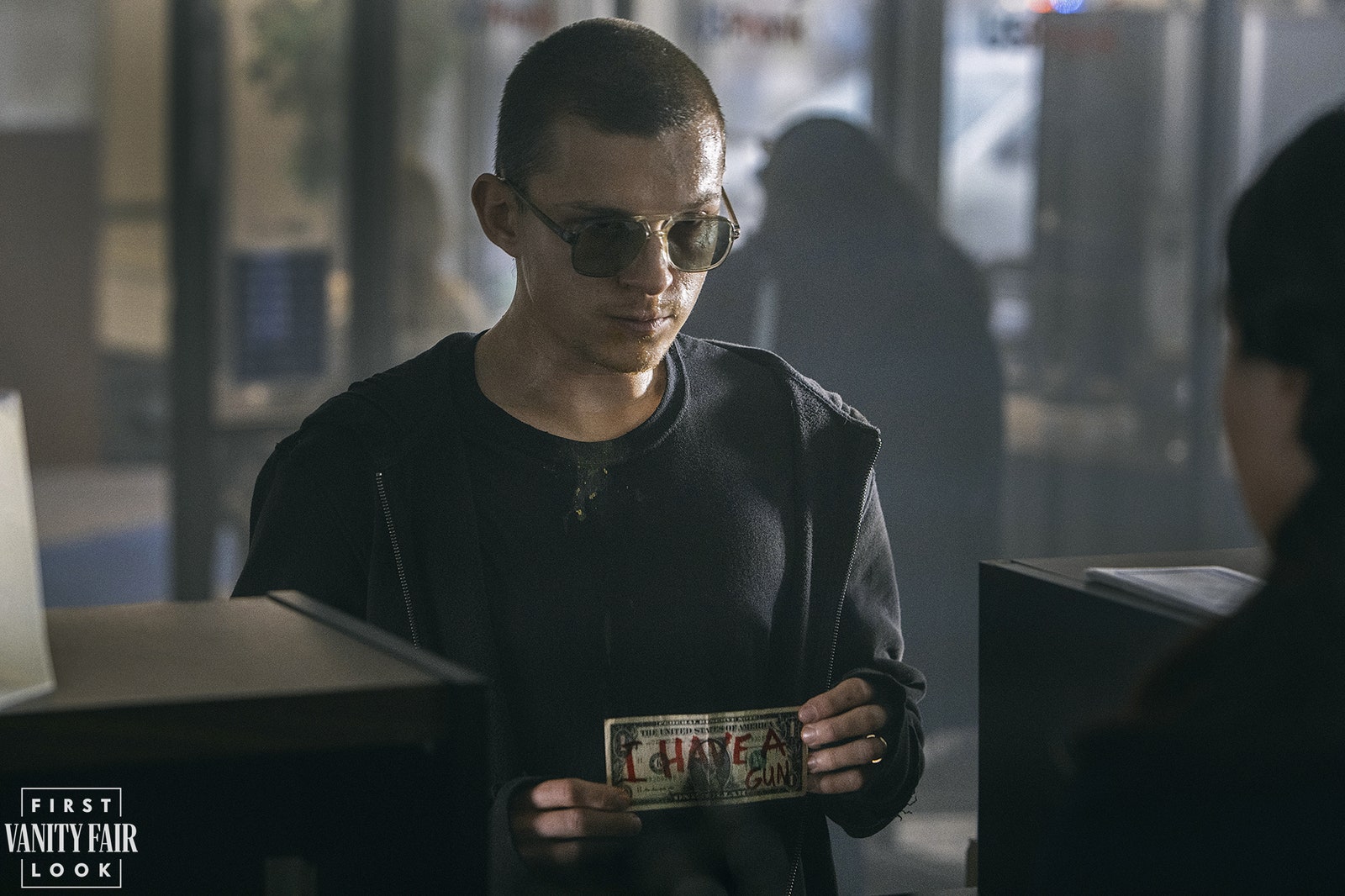 Cherry stars Tom Holland as a young man from Cleveland who is a war veteran that became a drug addict and was forced to start robbing banks to pay for the drugs.

We knew the movie was coming, and we have known since September that Apple TV+ will be distributing it, with the promise of an early 2021 release. Now, Vanity Fair is debuting the first-ever promotional images for the movie, with an in-depth article that also contains a few quotes from the filmmakers. It is also officially confirming that the movie will debut in theaters on February 26, 2021, and on March 12, 2021, on Apple TV+.

“We do think about it as an epic film, and it is very much a person’s life journey. But it does have a little bit of a split personality between being this character study and an epic life cycle.”

“He travels a great distance over a 15-year period. The movie’s broken up into six chapters that reflect those different periods, and each one has a different tone. It’s shot with different lenses, different production design. One’s got magical realism. Another chapter is absurdism. Another is horror…There’s a bit of gonzo in it. It’s raw in its tone. He’s a character in existential crisis.”

Quite honestly, I’m very intrigued about the “magical realism” part of it. As a massive fan of Gabriel García Márquez’s novels, which featured this style of writing to an extreme, I wonder to what degree they will incorporate that subgenre into the movie, as it actually hasn’t been brought up a lot on the big screen. 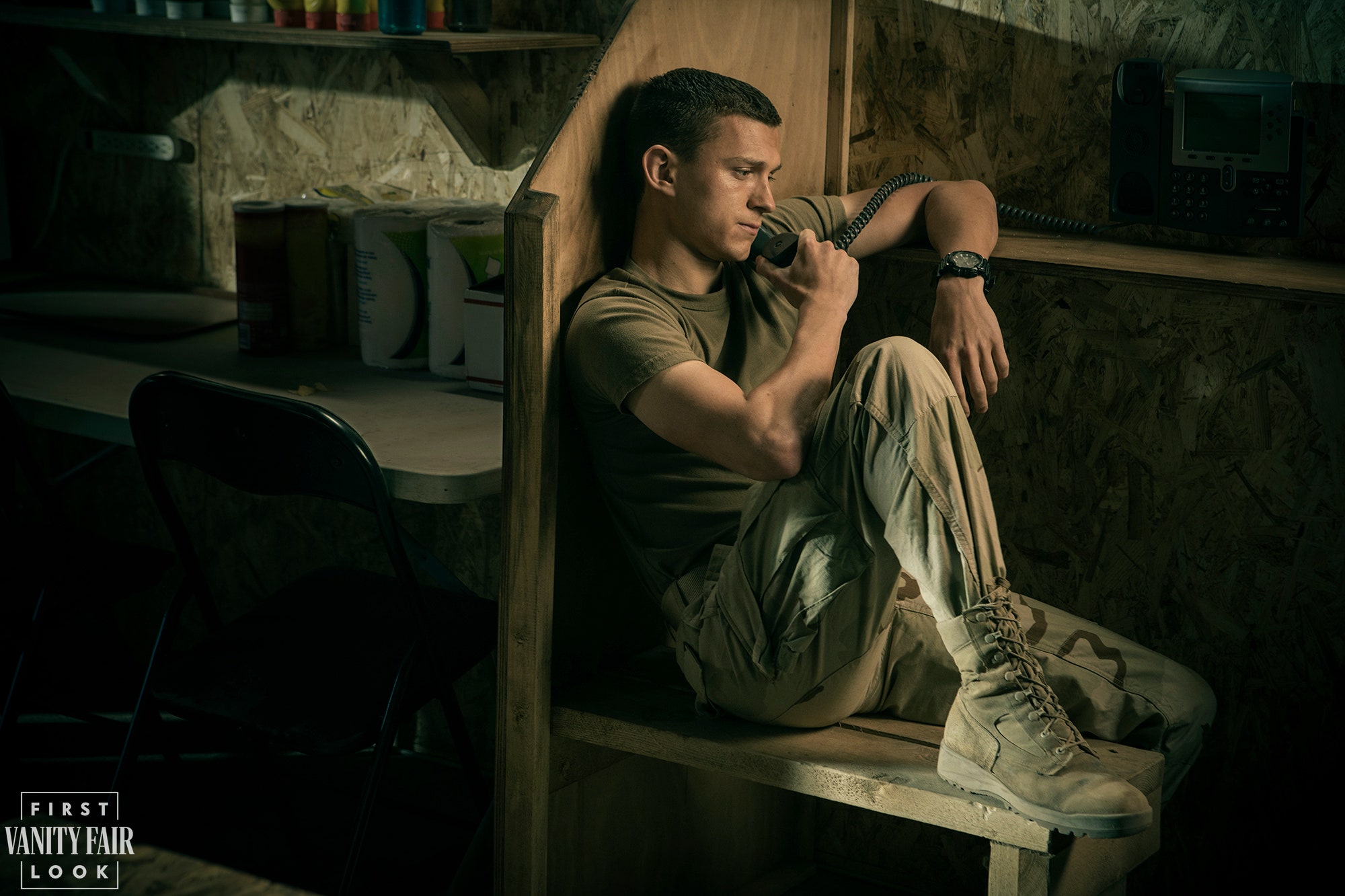 This was a personal story and a passion project for the filmmakers, since it reflects the reality they once lived in their hometown. Joe explained this to the magazine:

“We’re from Cleveland and Nico’s from Cleveland. Interestingly enough, we know a lot of people that are implied in the book. I think he’s fictionalized names and personalities. But I worked at the same restaurant that Nico worked at, 10 years apart. So he had a very similar upbringing to us. He just had a very different journey than we did.”

The movie is ultimately a love story between Tom Holland’s title character and Ciara Bravo, who plays her young wife Emily. They married before he went to war (which he did after she left him first), and then Emily also becomes a drug addict, following the steps of her husband. About their relationship, Anthony Russo said:

“The love story is the central spine of the film. Without that relationship in the movie, it all falls apart for him. We knew that we needed to make her presence and her character glow in the moments that we did have with her.”

“We really wanted someone that embodied that sense of innocence for him. It was a dream girl, the girl next door,” 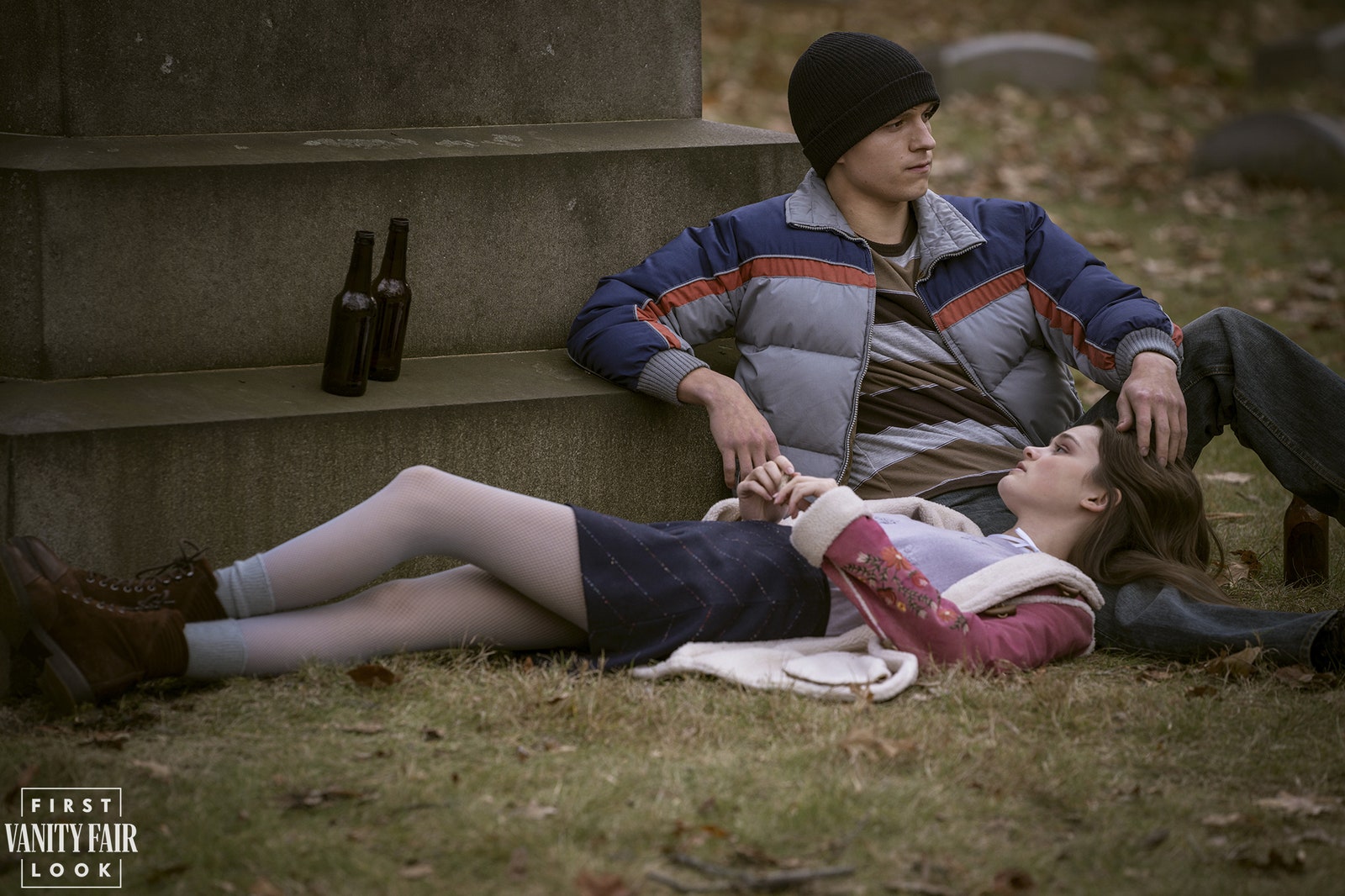 About the impact of this movie, Joe Russo told Vanity Fair:

“This is a movie that’s supposed to define the experience of having PTSD, the experience of being addicted to opioids. And the mission of the film is to generate empathy, not to generate disdain, not to indict. It was critical that you empathize with his struggle and his journey because a lot of people are going through this, and they’re having a very human experience. I think empathy is in incredibly short supply right now in the world. And it’s a tragedy.”

Cherry is poised to be one of Apple’s big awards contender. The lineup for the streaming platform is not as extensive as Netflix’s by a long shot, but between this movie and some of the others, they could still make some noise. Those other movies include Sofia Coppola’s On The Rocks, starring Bill Murray and Rashida Jones, the documentary Boys State, which won the Sundance Grand Jury Prize, and Beastie Boys Story, from Spike Jonze.

As of today, Cherry does not represent a threat in any of the major categories, but it will be interesting to see how Apple manages its awards campaign. Both the Best Actor and Best Director categories are stacked, and it is highly unlikely it will get any nominations there, so Apple’s best shot for the big awards is probably trying to sneak in the movie as a dark-horse for Best Picture. It is a long shot, but there are always a couple of spots available for movies like these. Let’s see how things evolve from here.

Cherry has been directed by Joe and Anthony Russo, from a script by Jessica Goldberg and Angela Russo-Otstot, based on the 2018 novel by Nico Walker. It was executive produced by AGBO’s Todd Makurath, Jake Aust, and Hideaway’s Kristy Maurer Grisham, plus Judd Payne. The cast includes Tom Holland, Ciara Bravo, Kelli Berglund, Jack Reynor, Forrest Goodluck, Jeff Wahlberg, Michael Gandolfini, Kyle Harvey, and Thomas Lennon. It will premiere in theaters on February 26, 2021. 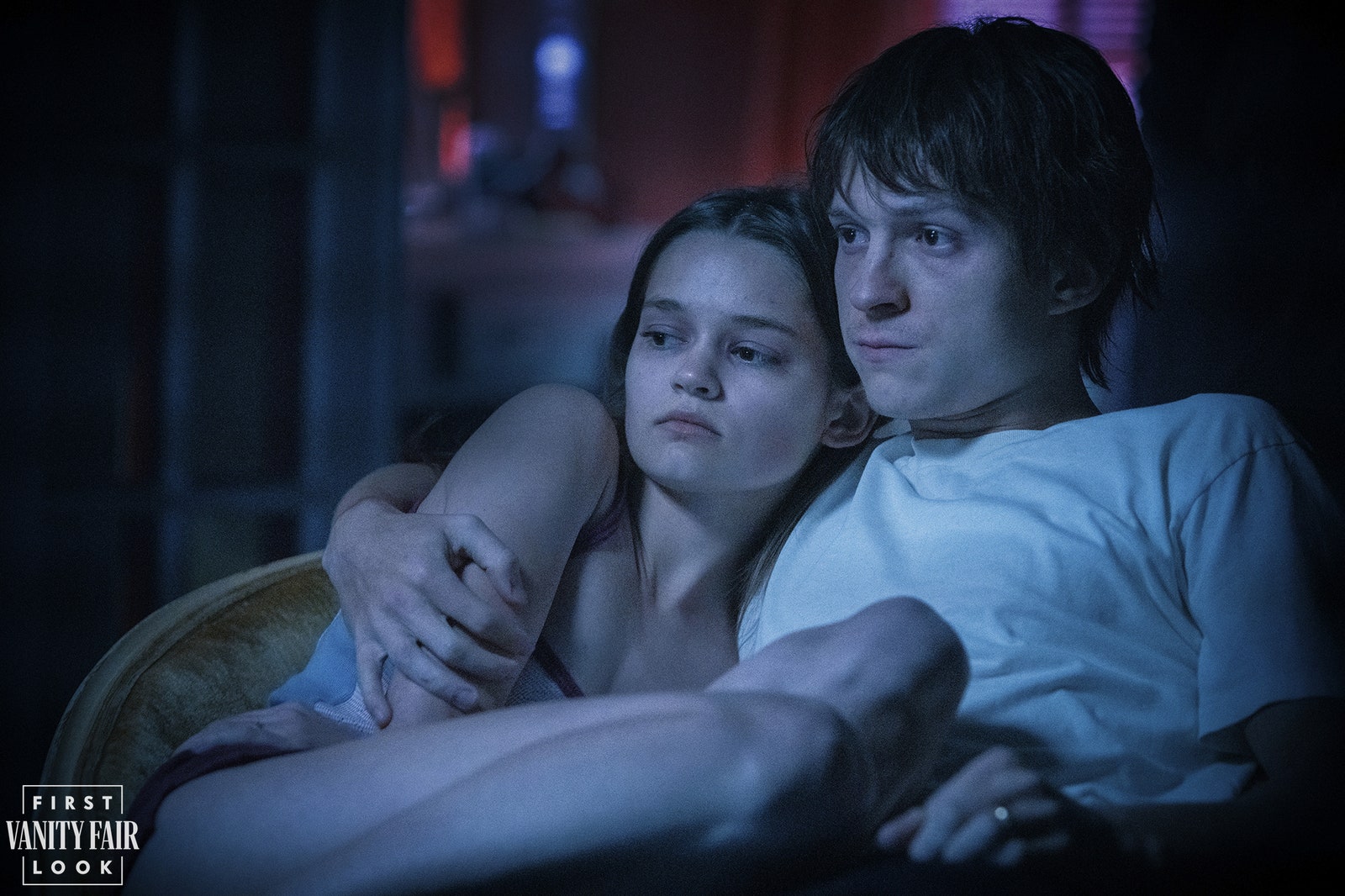 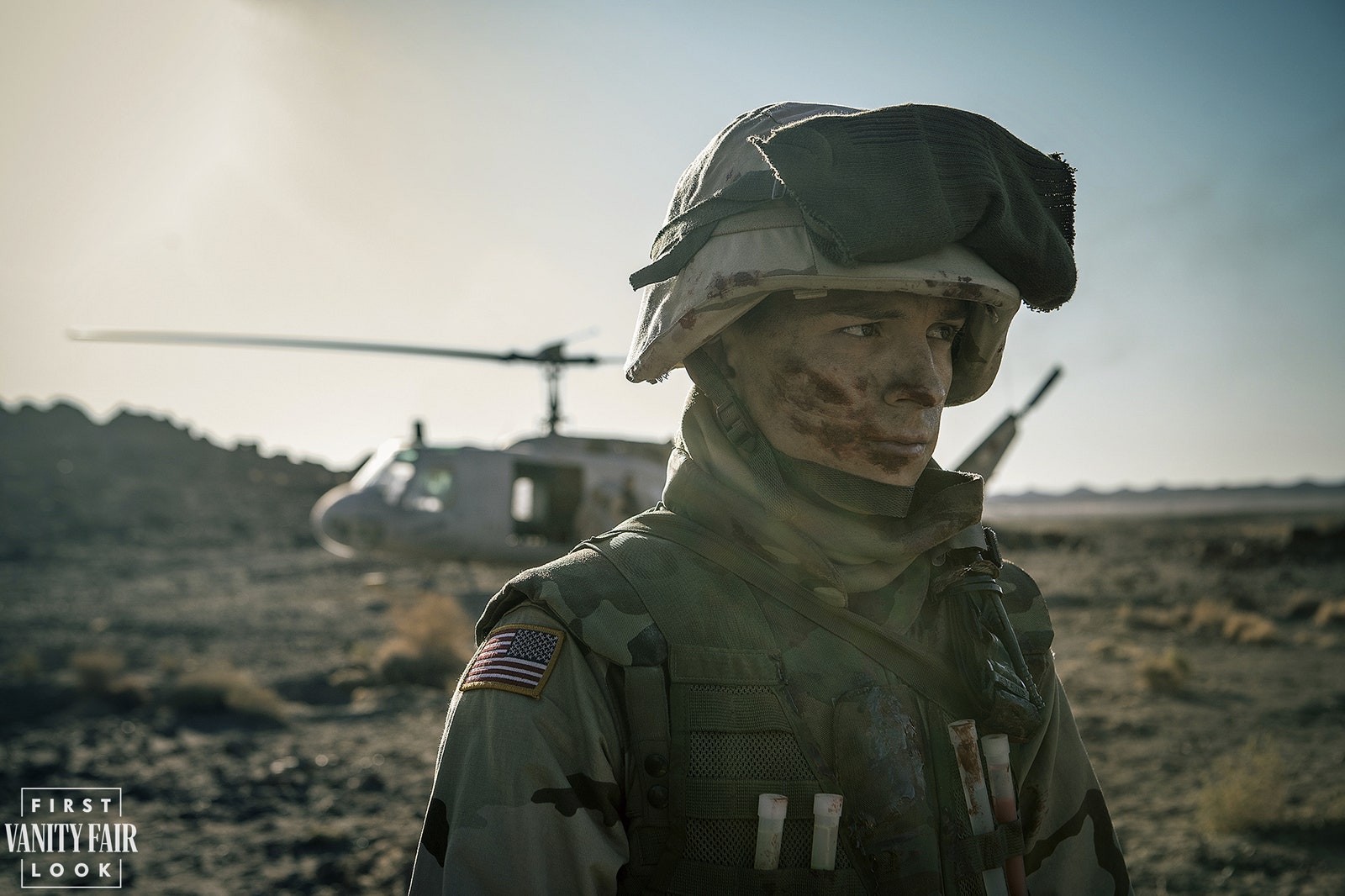