This awards season continues to surprise us every day, and right now Frances McDormand seems like the only option to stop Netflix from earning the Best Actress award at the upcoming Oscars. But what about Zendaya in Malcolm & Marie?

Back in September, Netflix announced they had acquired the rights to distribute Sam Levinson’s Malcolm & Marie, a movie he secretly shot during quarantine with Zendaya and John David Washington.

Today, THR is reporting that the studio will be launching an all-in awards campaign for the movie, and has dated it for a February 5, 2021, release on Netflix. Even though this might not seem like a big deal, it actually is. With Netflix’s financial support, this movie could land several nominations, and they will probably capitalize on the fact that it only features two actors on-screen for the entire runtime – they will be promoting John David Washington for Best Actor, and Zendaya for Best Actress, with all of their resources.

However, this does not come in a vacuum. Netflix has a tremendous lineup of movies for this upcoming awards season, probably the largest any studio has ever had, and after Zendaya’s win at the Emmys for Euphoria (a show in which she also was directed by Levinson), she could very well be scoring an Oscar nomination this year. That would mean that, at the very minimum, three of the five Best Actress nominees would be from Netflix’s films.

Right now, the favorites are Viola Davis for Ma Rainey’s Black Bottom (Netflix), Frances McDormand for Nomadland (Searchlight), and Vanessa Kirby for Pieces of a Woman (Netflix). Also in contention are Amy Adams for Hillbilly Elegy (Netflix), Zendaya for Malcolm & Marie (Netflix), Meryl Streep for The Prom (Netflix), Kate Winslet for Ammonite (Lionsgate), or Sophia Loren for The Life Ahead (Netflix). Can you see the pattern?

The Best Actress category is not the only one they will be populating. Chadwick Boseman for Ma Rainey’s Black Bottom, Gary Oldman for Mank, and Delroy Lindo for Da 5 Bloods also lead the charts for Best Actor, and we haven’t thrown Washington into the mix. Right now, the only candidate who could take the statue away from the streaming platform would be Anthony Hopkins for The Father (Sony).

When it comes to the Best Director category, I think this one is the least likely to land a nomination. Originally, Malcolm & Marie was depicted as this year’s version of Marriage Story, a movie which didn’t manage to land a Best Director nomination last year, even though it earned the rest of the big ones. Netflix already has several contenders for this cateogry, including David Fincher for Mank and Aaron Sorkin for Trial of the Chicago 7, but as of today, Chloe Zhao for Nomadland is the favorite, miles ahead of everyone else.

Malcolm & Marie could sneak into the Best Picture category, which Netflix is already poised to dominate, with movies like Mank, Trial of the Chicago 7, Ma Rainey’s Black Bottom, Da 5 Bloods, and maybe even News of the World, although that is only an international release for them. Movies like The Prom or Malcolm & Marie could land a nomination too. As of today, Nomadland is the favorite as well.

In addition to reporting Netflix’s campaign, THR has also released the second picture from this movie, after Zendaya posted the still above during the summer: 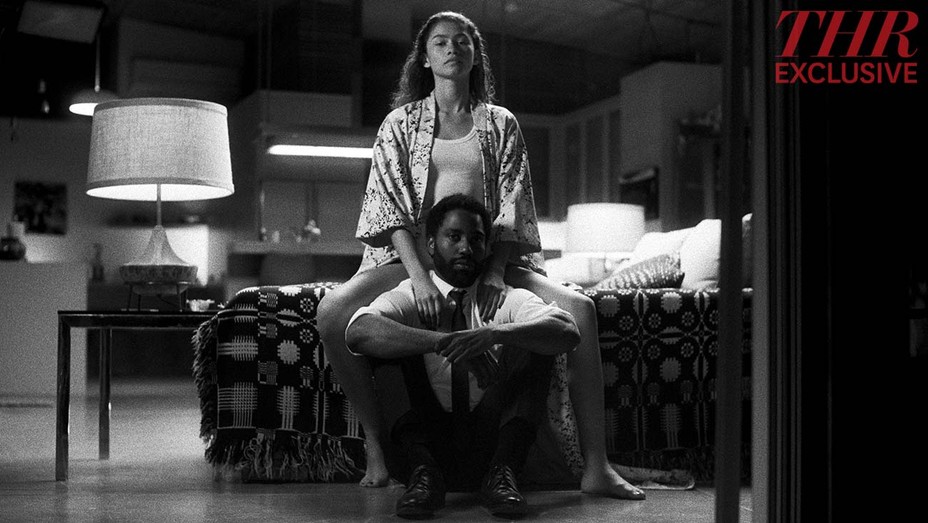 Shooting took place between June 17-July 2 at Feldman Architecture’s Caterpillar House, an environmentally conscious glass architectural marvel in Carmel, CA – the producers worked with doctors and lawyers to make sure that the production was fully compliant with WGA, DGA, and SAG-AFTRA approvals, plus COVID-19 safety protocols. The film was shot on 35mm in black and white. The official synopsis released by Netflix reads:

Sam Levinson teams up with Zendaya and John David Washington for an achingly romantic drama in which a filmmaker (Washington) and his girlfriend (Zendaya) return home following a celebratory movie premiere as he awaits what’s sure to be imminent critical and financial success. The evening suddenly takes a turn as revelations about their relationships begin to surface, testing the strength of their love. Working with cinematographer Marcell Rev, Levinson creates a film of rare originality; an ode to the great Hollywood romances as well as a heartfelt expression of faith in the medium’s future.