‘Painkiller’ to Get Backdoor Pilot in ‘Black Lightning’ Season 4 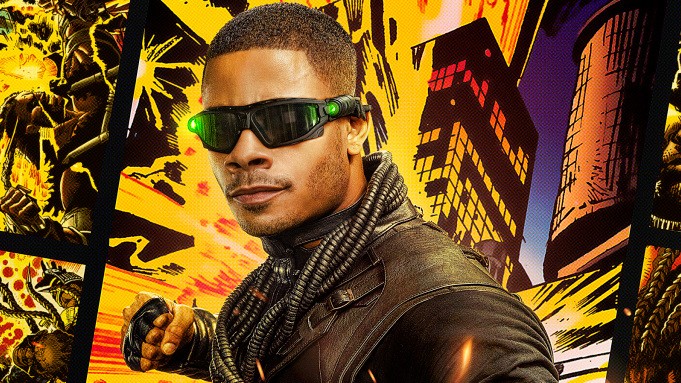 The Arrowverse is set to get a little bigger next year as Deadline reports that The CW are planning a backdoor pilot for Jordan Calloway’s Painkiller.

Khalil Payne has been a lot of things in life. Student. Gang enforcer. Dead. Reborn. As Painkiller he was the ASA’s killing machine, brainwashed to the point of killing his own mother. After defeating the Painkiller program, Khalil became something else. A hero. Or at least on the path to becoming one as he helped Black Lightning liberate Freeland from the forces of Markovia.

According to Deadline, the backdoor pilot, which will air in February 2021 as the seventh episode of Black Lightning’s fourth season, finds Khalil in a new city, trying to start a new life as his past catches up to him:

“Calloway plays Khalil Payne, a man ridden with the guilt of his troubled past from his former life in Freeland City, where, as a super-enhanced killing machine known as Painkiller he was both a member of Tobias Whale’s gang and a weapon of Agent Odell and the shadowy ASA.

After attempting to bury the darker, devastatingly lethal Painkiller part of his persona, Khalil has distanced himself away from everyone he knows and loves in a new city, Akashic Valley, in order to find peace, but peace never comes easy for men with pasts like his. As his violent, destructive history crashes his idyllic new beginning, Khalil is thrusted back into action with a new mission: bring justice where he once gave out punishment. But to do that, he will first have to deal with and harness his darker side.”

The pilot will be written, directed, and executive produced by Black Lightning showrunner Salim Akil, making Painkiller, if picked up by The CW next season, the first Arrowverse series not produced by Berlanti Productions.

Whilst this is great news for DC and Arrowverse fans, it’s important to note that a backdoor pilot is not a guarantee of a series order. Green Arrow and the Canaries received a backdoor pilot in the final season of Arrow but hasn’t yet been picked up for a series. However, this year’s pickups were a little different than usual due to COVID-19, so I still have a little hope that the Canaries may yet fly, and with production now resumed and a vaccine on the horizon, I’m optimistic that we’ll be seeing Painkiller next fall.